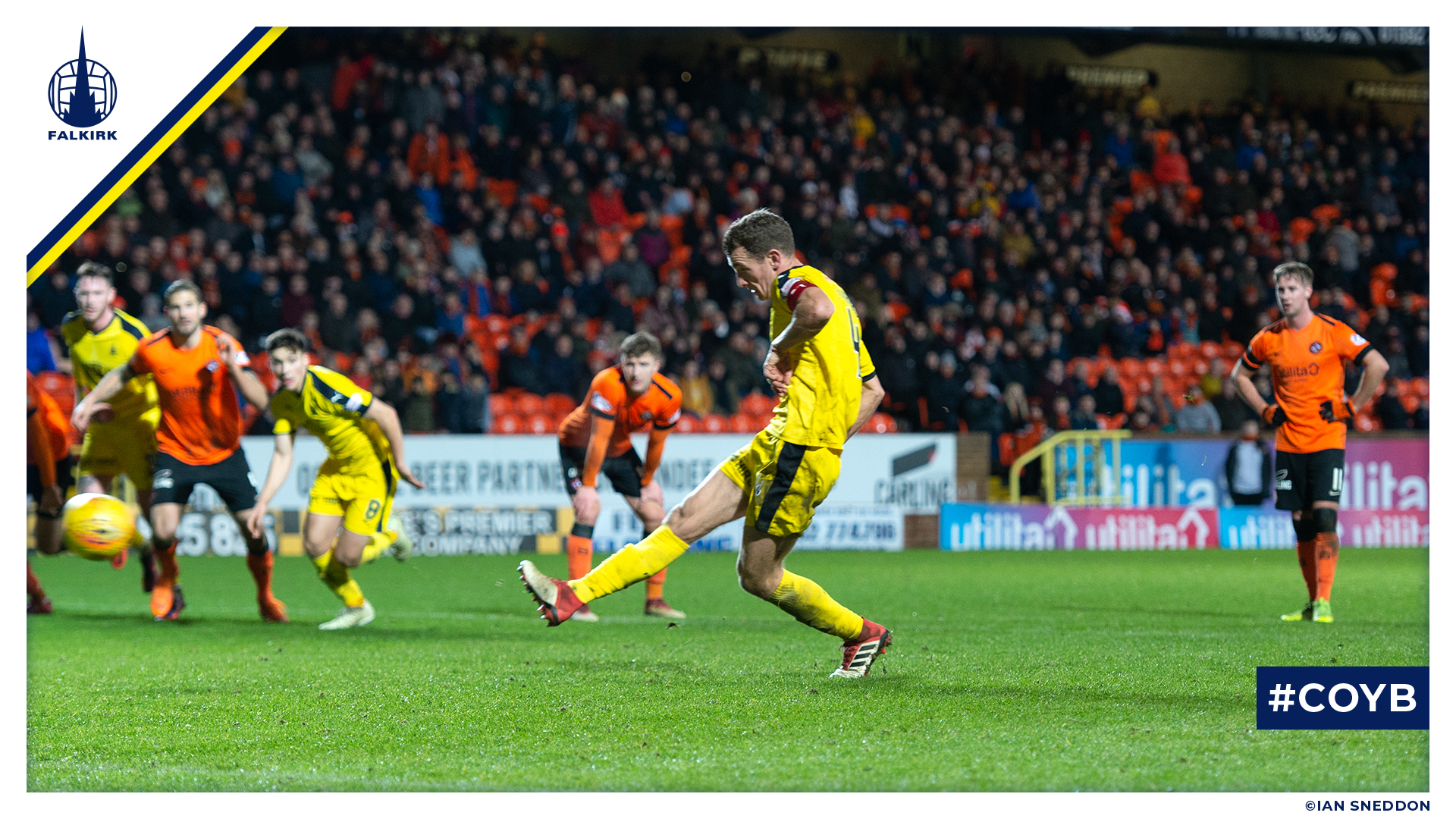 Ten man Falkirk slipped to defeat at Tannadice as goals either side of half time secured a 2-1 victory for Dundee United.

Ray McKinnon was forced into one change to his starting XI as Deimantas Petravicius dropped out through injury, to be replaced by Marcus Haber.

United started the match the brighter of the two sides and won the first corner of the afternoon on four minutes. From the resulting set piece a free header dropped just wide of the target. Falkirk’s first opportunity came as Zak Rudden flicked the ball past his man before racing forward only to be denied by Benjamin Siegrist who had advanced from his line to boot the ball clear.

Falkirk remained dangerous on the break as Tommy Robson advanced forward before playing a low cross into the box. The ball bounced up via a deflection into the path of Zak Rudden whose header was tipped for a corner by Siegrist. From the resulting delivery, Patrick Brough headed a dangerous cross back into the mixer, where Muirhead and Haber were unable to connect properly before United cleared.

The hosts took the lead on 21 minutes through rather unfortunate circumstances as Sam Stanton found a yard of space to turn and hit a low drive that deflected off Aaron Muirhead and into the back of the net.

The rest of the first half saw United have the majority of possession, but fail to create many more chances in front of goal. With five minutes to the interval, David Mitchell was forced into a fine stop to tip a superb volley from 18 yards over the bar.

The Arabs came out the traps at the start of the second half and pinned the Falkirk defence back in search of a second goal. They only had to wait another seven minutes for it as Pavol Safranko peeled off his man at a corner to head in off the far post despite the best efforts of Mitchell and Haber on the line.

Lewis Kidd and Marcus Haber were replaced by Dennon Lewis and Andrew Irving on the hour mark as Ray McKinnon looked for a route back into the match. Their attempts were dealt a serious blow four minutes later as Paul Paton was shown a straight red card for violent conduct. The midfielder was brought down on half way with a number of players from both sides coming to blows soon after.

Zak Rudden had a low drive held by Siegrist before Robson delivered a good cross from the left that was flicked on by Dennon Lewis just ahead of Rudden.

On 90 minutes the Bairns were handed a lifeline. Dennon Lewis went on a terrific solo run before being brought down inside the box. Steven Kirkland pointed to the spot with Aaron Muirhead stepping up to smash home.

It was a nervous five minutes of additional time for the hosts who managed to hold on to their one goal victory.