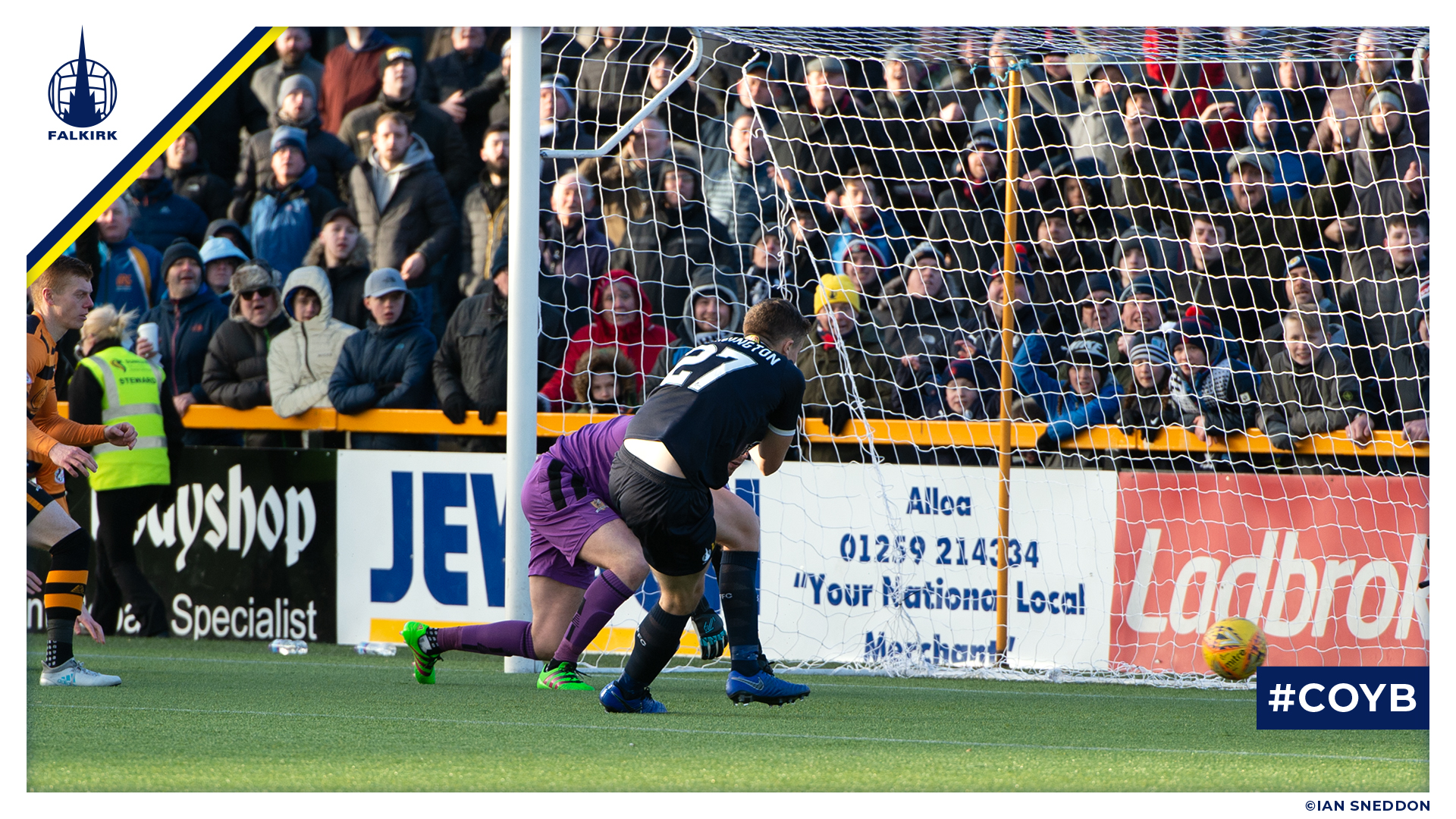 The Bairns moved up to 8th in the Ladbrokes Championship table as Jordan McGhee’s first half header and Mark Waddington’s second half strike proved enough to secure a 2-1 victory over Alloa Athletic at The Indodrill Stadium.

Ray McKinnon made just one change to the side that beat Queen of the South 3-0 last week as the suspended Davis Keillor Dunn was replaced by Mark Waddington. Ross MacLean returned from injury to take a place on the bench.

Falkirk started the match brightly with Paul Dixon delivering a cross that was inches away from the head of Waddington. At the other end William Edjenguele and Ciaran McKenna did well to thwart Dario Zanatta who had cut in from the left and into a dangerous shooting position.

With 20 minutes played Falkirk took the lead. A terrific move forward saw Paul Paton and Jordan McGhee combine before the ball was slipped wide to Zak Rudden whose cross was headed home at the back post by McGhee. It was a well placed finish from the right back who left Neil Parry in the Alloa goal with no chance.

It took the hosts just 10 minutes to pull level. Dario Zanatta burst forward on the left before crossing to the near post for Sunderland loanee, Connor Shields to fire into the roof of the net.

Alloa finished the first half the stronger and were inches away from taking the lead as William Edjenguele accidentaly turned a corner towards his own goal, but it was cleared on the line by Paul Dixon.

It was to be an important second half for Ray McKinnon’s men and it got off to a dream start when, just a minute in, Mark Waddington made it 2-1. Deimantas Petravicius got the run of his man on the left, before firing a low ball across goal to Waddington who took a touch before knocking in at the back post.

Rudden had a header from a corner just wide, before Ian McShane had two strikes from around 20 yards that flew over the bar. Falkirk were dominant throughout the second period and had further good chances to extend their lead. Substitute Ross MacLean drilled a powerful effort over the bar with 10 minutes to play, before Deimantas Petravicius took hold of the ball 15 yards from goal, but his low effort was well held by Parry.

Alloa had a late flurry of possession as two corners were sent into the mixer, but it was to be Falkirk’s day as the Bairns held on for an important three points.

The full time whistle was met with a huge roar from the 1500+ Falkirk fans in attendance as Ray McKinnon’s side continued their unbeaten run and climb up the Ladbrokes Championship table.