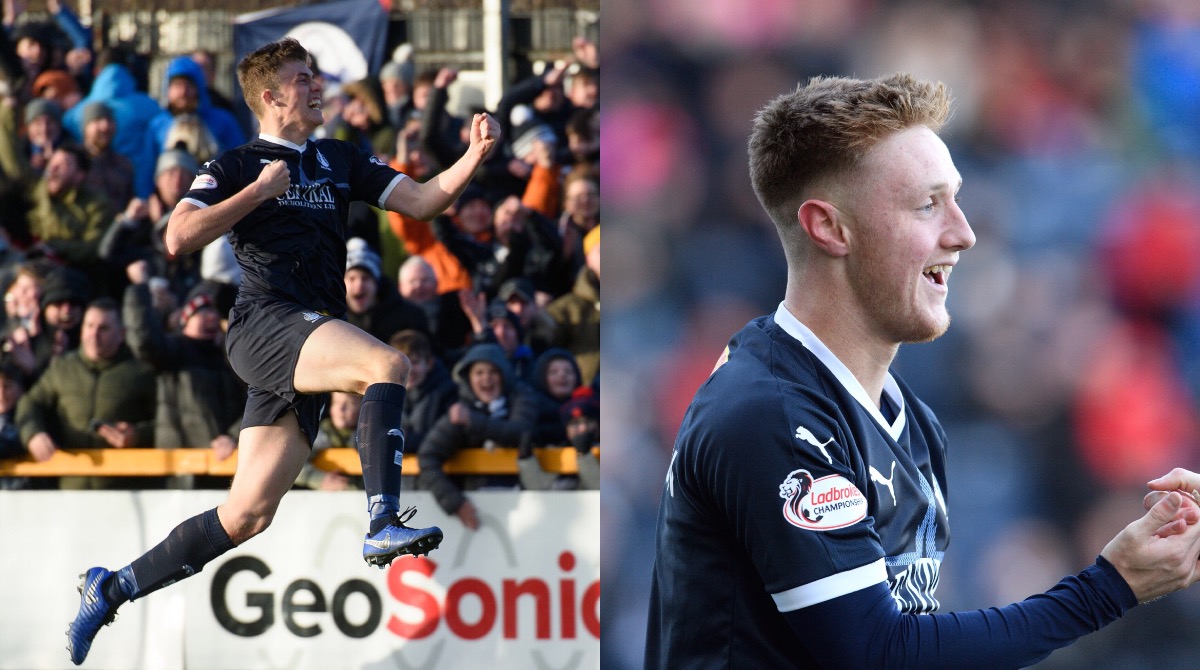 We spoke to on loan midfielders Davis Keillor-Dunn and Mark Waddington on their time so far at Falkirk and how they’ve found the club since arriving.

The boys began with general thoughts on moving to Falkirk. Mark began with his first impressions of the town and club: “It’s a good place and I’m enjoying it. There’s a load of boys that stay close by, and we get out into the town for coffees and getting food, and things like that a lot. We’ve got out into the community helping out as well which has been good.

“We went to a nursery the other week to give out tickets and I really enjoyed it. The fans have really been good, everyone has welcomed us in and helped us out, recommending restaurants in the town and things to do, it’s been great so far.”

Davis added: “I think the people of Falkirk are a bit different, they’re more football orientated than other places I’ve been. The boys are really close together, we’re always doing stuff with each other which is good for moral.”

It’s Mark’s first time staying away from home to play football, but the transition hasn’t been too drastic for the young midfielder, something which he credited his family and the other new players for:

“I’m not too bad to be honest, my family come up for all the games so it’s good to see them, but I’m okay. It’s new surroundings for a lot of the guys so I’ve been interacting with the lads and making new mates, we spend a lot of time together as a team off the pitch which is definitely good for matchdays.”

Davis’ family also attend the games, and he is glad they feel the same way about the club that he does:

“My family try and get to every first team game I play as well, they love it. They say the same as me, they love the stadium and love the fans. It’s a massive, massive club, and they know that, so they love coming up and seeing me playing games.”

Falkirk’s away attendances have been huge in the league in 2019, taking over 1400 to Partick Thistle and over 1500 to Alloa. Davis gave his thoughts on the positive impact of this for the players:

“Usually when you go to other grounds, you’d expect them to have loads more fans, but it hasn’t been the case. We’ve had really good attendances of our fans there, they’ve turned out in their numbers and have really got behind the boys. Sometimes you can get swallowed up in bigger stadiums, with loads of home fans, but our supporters have been there, standing out and singing and it just helps the boys so much.”

Ray McKinnon’s January signings finished by discussing the reception they have been given by the Falkirk fans since arriving at the club. Davis started by telling of the gratitude they have for the welcome they’ve been given:

“The fans have been brilliant, on Twitter they’ve been getting in touch with us and stopping us in the street. They’ve just made us feel so wanted and welcome, which is what you need as a player, you need confidence and people who are backing you and getting behind you.”

Mark concluded by emphasising the need for positive performances, to reward the fans who have backed them so well:

“We’ve got to perform as well, the fans love the club just like we do, so we need to put the performances in for them on the weekends. If we can do that and put 100% in every week, they’ll back us, and like Davis said; we’ll keep getting those messages and seeing them in the town, if we’re good to them they’ll be good to us.”