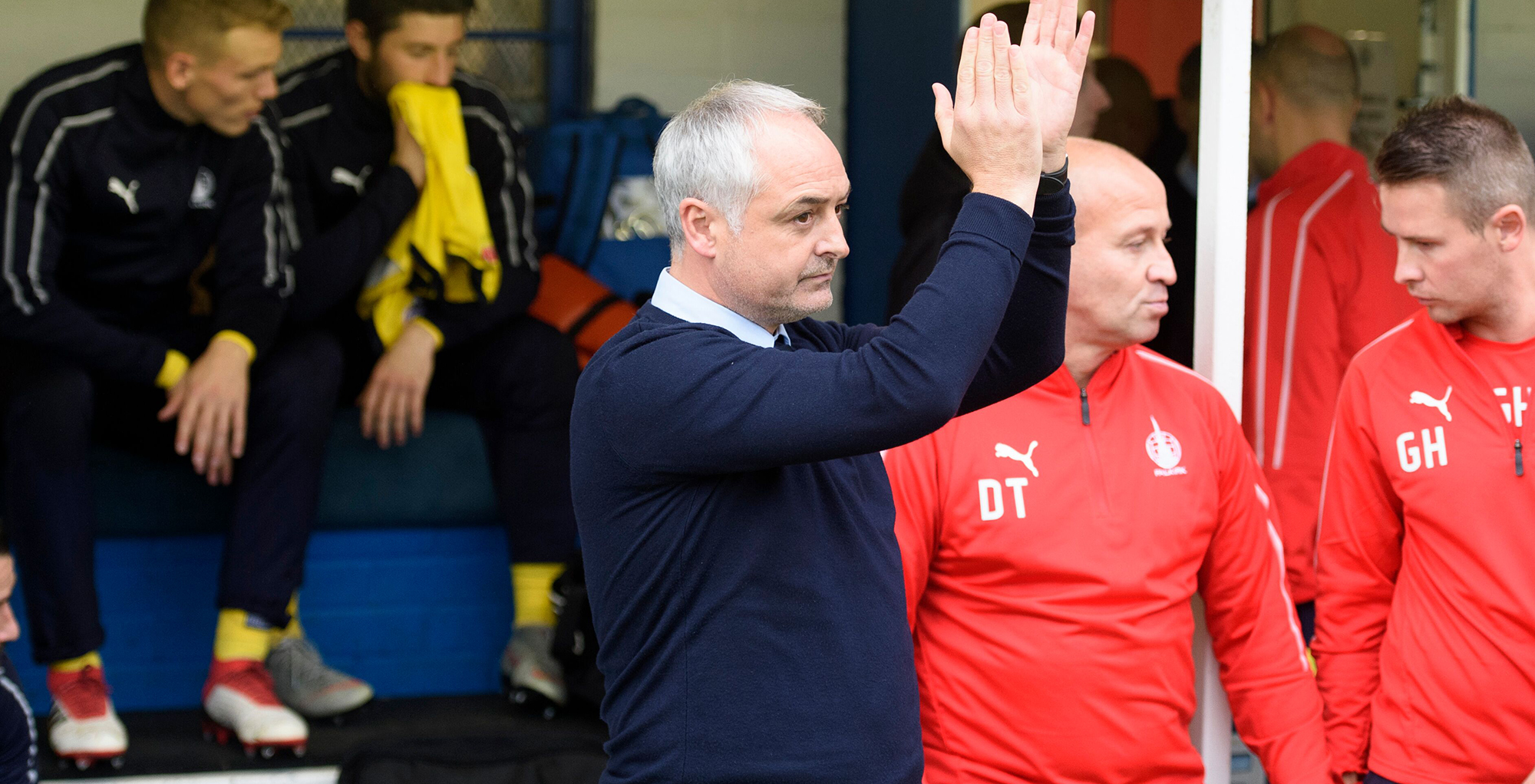 Falkirk manager, Ray McKinnon is all set for tomorrow evening’s trip to Cappielow to take on Greenock Morton in the Ladbrokes Championship.

The 7:05pm kick off is being shown live on BBC Scotland and, despite the interest surrounding the off-field matters in relation to the fixture, the Bairns boss insists he’ll treat tomorrow’s clash like any other:

“It’s just another game, I really don’t think about it any more. We are on a good run of form and Morton got a great result on Tuesday night that will give them a boost. It’ll be a tough game, they’re a good squad, but we’re unbeaten in two months so we’ll be going down there with a positive mindset to try and win the game.”

The new-look squad have only been together for a matter of weeks, but confidence is high having remained unbeaten since the turn of the year. There’s a winning mentality being built and McKinnon can sense an improvement week on week as his group continue to come together:

“Most of the players have been together 4-6 weeks so they’re really starting to gel. We are starting to get an identity too by the way in which we play which is really good. We have brought in some good professionals, we are in a good frame of mind and all we are trying to do is win as many games as we can between now and the end of the season. We need to do it, although I think a lot of teams need to, but that’s our mindset for Friday.”

It was a difficult start to life at The Falkirk Stadium for McKinnon with his inherited side cut adrift at the bottom of the table. A battle for points ensued with the Bairns clawing themselves right into the mix heading into the festive period. Since then it’s been a continual upward climb as the Championship table tightens week on week. With the gaps right across the division continuing to narrow, McKinnon is certain that the league will go right to the wire:

“We came from zero points after something like seven games so we have made up a mountain of ground on a number of teams and we just need to keep doing that. Hopefully we can, but everyone knows how tough this league is. Everyone can beat everyone, all the games are competitive, but everyone will have a tough run in. The next 11 games for everyone will be rollercoaster stuff, everyone is fighting for something. I think it’ll be a really exciting end to the season for a lot of teams. I think there will be a lot of things up for grabs right until the final day, the league really is that tight this year.”

Looking specifically at Friday’s fixture, the Falkirk boss has a couple of injury doubts in his squad. Whilst he wasn’t in a position to confirm who they were, he insists they’ll be given every opportunity to make the team:

The final word for this week from McKinnon came for the fans. The second highest attendance in Scotland was registered at Westfield last Saturday and after seeing the Falkirk faithful turn out in significant numbers at recent away fixtures too, the manager has little doubt that the same will happen tomorrow evening:

“I like night games, I think it brings a really good atmosphere to the game and I am sure it will be the same on Friday night. We’ll take a big crowd I am sure, our crowds have been fantastic recently. Taking 1,500 to games at Partick and Alloa – it’s fantastic and I am sure they’ll turn out in their numbers again which will add to the atmosphere. There was a great atmosphere last Saturday as well and that really helped the players in that final push. We are all really grateful to the fans for their backing, it’s great to see.”