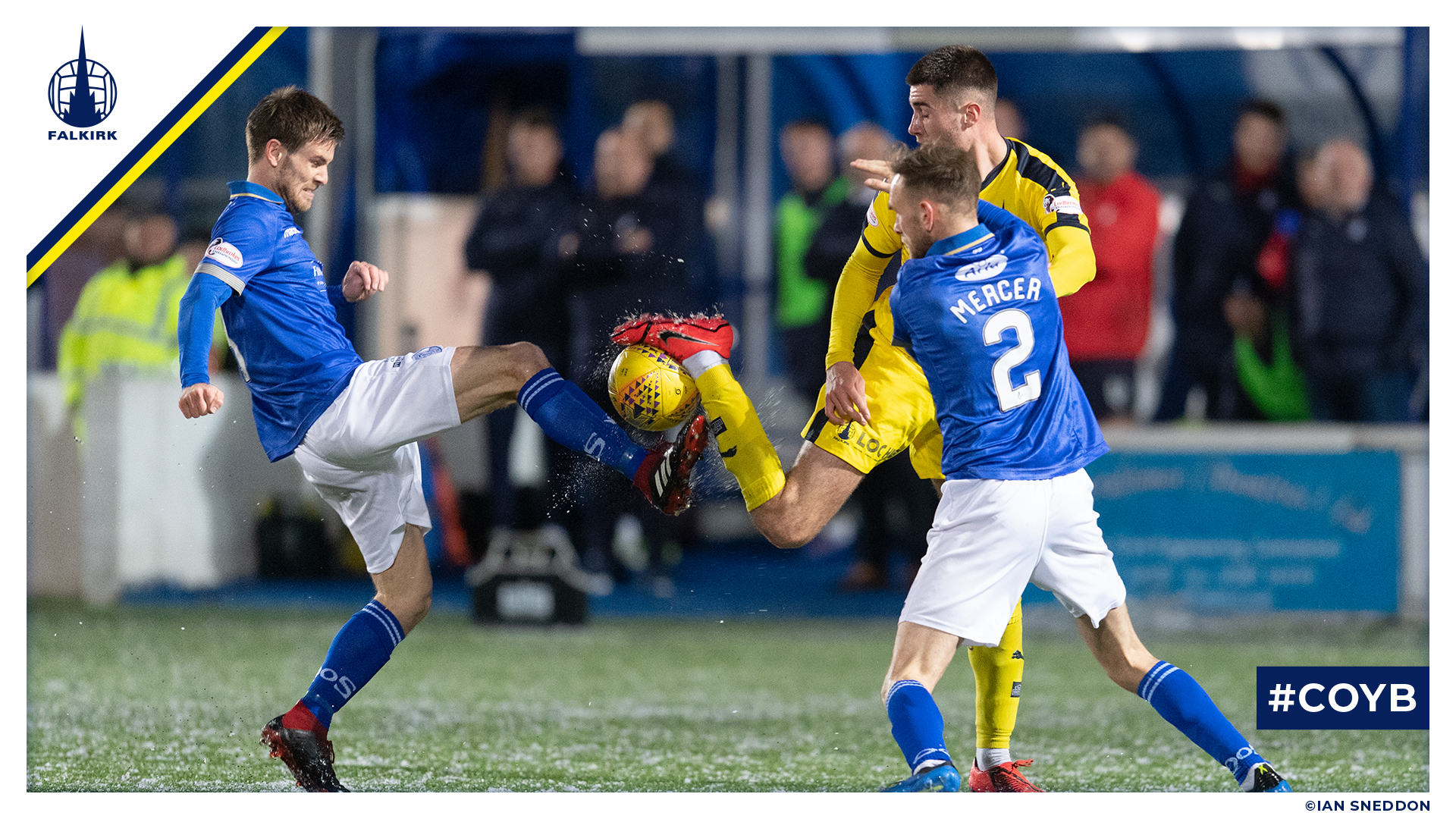 There was late, late heartbreak for the Bairns as Stephen Dobbie fired home a 96th minute equaliser from the spot to deny Ray McKinnon’s men a vital three points at Palmerston.

Mark Waddington and Aaron Jarvis took the place of Zak Rudden and Davis Keillor Dunn as Falkirk began the match in a 4-3-3 formation.

Deimantas Petravicus won an early corner after a superb, bursting run down the right, but as Ian McShane delivered the cross for a second time, referee Barry Cook awarded a foul to the hosts. Falkirk’s threat continued on seven minutes as Aaron Jarvis flicked Harry Burgoyne’s goal kick into the path of Mark Waddington. The on loan Stoke City midfielder darted towards the box, before being thwarted on the edge of the danger area as Queen sent the ball for another corner. McShane duly delivered once again, but Dixon’s header back across goal couldn’t be swept home by anyone in a yellow jersey as the game remained goalless.

Aaron Jarvis headed Jordan McGhee’s cross from deep into the arms of Leighfield, before a huge chance was missed by the Bairns on 24 minutes. Fullback, McGhee burst towards the by-line before cutting back for Deimantas Petravicius who scuffed an effort just yards from goal.

Falkirk had done well to keep Stephen Dobbie quiet for much of the first half but he sprung in to life on 40 minutes as he curled an effort from the edge of the box that was deflected just wide of goal and for a corner. Ian McShane had the final shot of the half as he hit a free kick narrowly past Leighfield’s right hand post from 25 yards.

Ray McKinnon’s men started the second half on the front foot with William Edjenguele clipping a diagonal pass to Paul Paton who volleyed over the bar from wide right of the 18-yard box. Josh Todd whipped a cross into the danger are that Falkirk just managed to clear on 53 minutes, before Ian McShane was again involved as he powered a low strike just wide of goal moments later.

Ray McKinnon made a couple of changes on 65 minutes as Davis Keillor Dunn and Zak Rudden were introduced into the action for Mark Waddington and Aaron Jarvis. Falkirk looked in command of overall proceedings and certainly had the majority of possession, but they were given a stark warning sign from the hosts as substitute, Iain Wilson hit a ferocious strike on the half volley from 30 yards that Harry Burgoyne did superbly well to tip over the bar.

The Bairns recovered quickly and had another period of good play around the Queens box, but there was just a lack of cutting edge as the match remained goalless. Stephen Dobbie was inches away from opening the scoring on 85 minutes as he forced Harry Burgoyne in to another wonder save as he tipped the striker’s dipping volley onto the underside of the bar, before the ball was eventually cleared.

Then with 90 minutes on the clock came five minutes of what can only be described as madness. Paul Dixon’s free kick into the danger area wasn’t cleared by the hosts with the ball eventually cannoning off the arm of Lyndon Dykes leaving the referee with little choice but to point to the spot. Davis Keillor Dunn stepped up to slot home and send the 450 traveling Falkirk fans wild. The attacker was then given his second booking for taking his top off as part of the celebrations.

Queens immediately surged up the pitch from kick off and after the ball was played back in to the danger area, Dykes went down under the challenge of Osman and Edjenguele with the referee again pointing to the spot. Stephen Dobbie fired home leaving the Falkirk players and fans sickened by such a cruel ending to a game they must have thought they’d won.