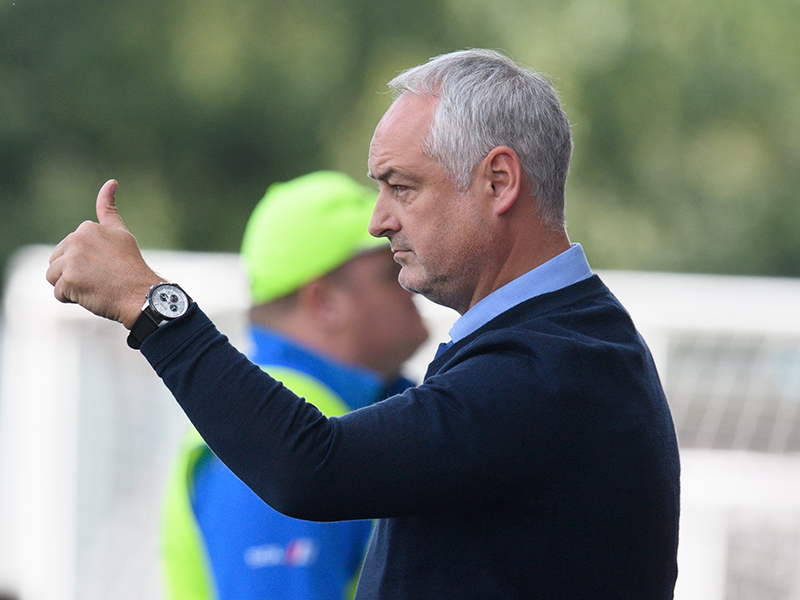 Ray McKinnon spoke to the press this week ahead of tomorrow’s visit to Stranraer.

The Falkirk boss began by discussing last Saturday’s victory over Forfar Athletic:
“We’re happy with the performance, happy to get the win. It was well deserved, we played well overall and everybody showed great desire, we need to try and maintain it now. Every game is going to be difficult but if we can play like that or how we played against Dumbarton consistently then we’ll have the best possible chance to win games.”

“I think the boys are starting to understand how to beat teams, every team is going to set up differently to the week before, you can watch as many games as you like and think they’re going to be open but then they come and play against you and don’t.”

Michael Doyle’s excellent strike opened the scoring on Saturday, his manager gave his view on it:
“It was a great strike, we had a good chat about where we wanted him to be when we were in possession and it was from that exact position he got his goal, if he was any wider the ball would have gone out there and the chance would be gone. He did really well to read the game and get into that position then drive forward and take his shot.”

He moved on to talking about the league campaign so far:
“We knew coming in it wouldn’t be easy, just look at Raith Rovers and Dunfermline who are big teams that have struggled recently, it’s a very competitive league with good players. To win in this division you need to go out there and play in certain way, and you’ll always find it difficult. We need to focus on playing games on the front foot, taking the games to teams, and go out and be really positive. It’s easy to play in front of teams, we need to take the game to them and get at them to break them down and get in behind.”

The gaffer finished by talking about tomorrow’s game against Stranraer and injuries within the squad ahead of it:
“Going down there is difficult. It’s going to be tricky, but we need to go with the right attitude the right intensity and if we do that well have a good chance to win the game. They’ll be smarting after last weekend; it looks worse than it was with an early sending off and three penalties. They’re a good, big side, which their home park will suit, so it’ll definitely be a physical game Saturday.”

“Michael Tidser has been struggling since last Friday and Charlie Telfer had to come off against Forfar because of a knock he picked up in the first half. Both have been working hard in rehab this week to get back and we will assess them tomorrow ahead of the game to see how they’re doing.”