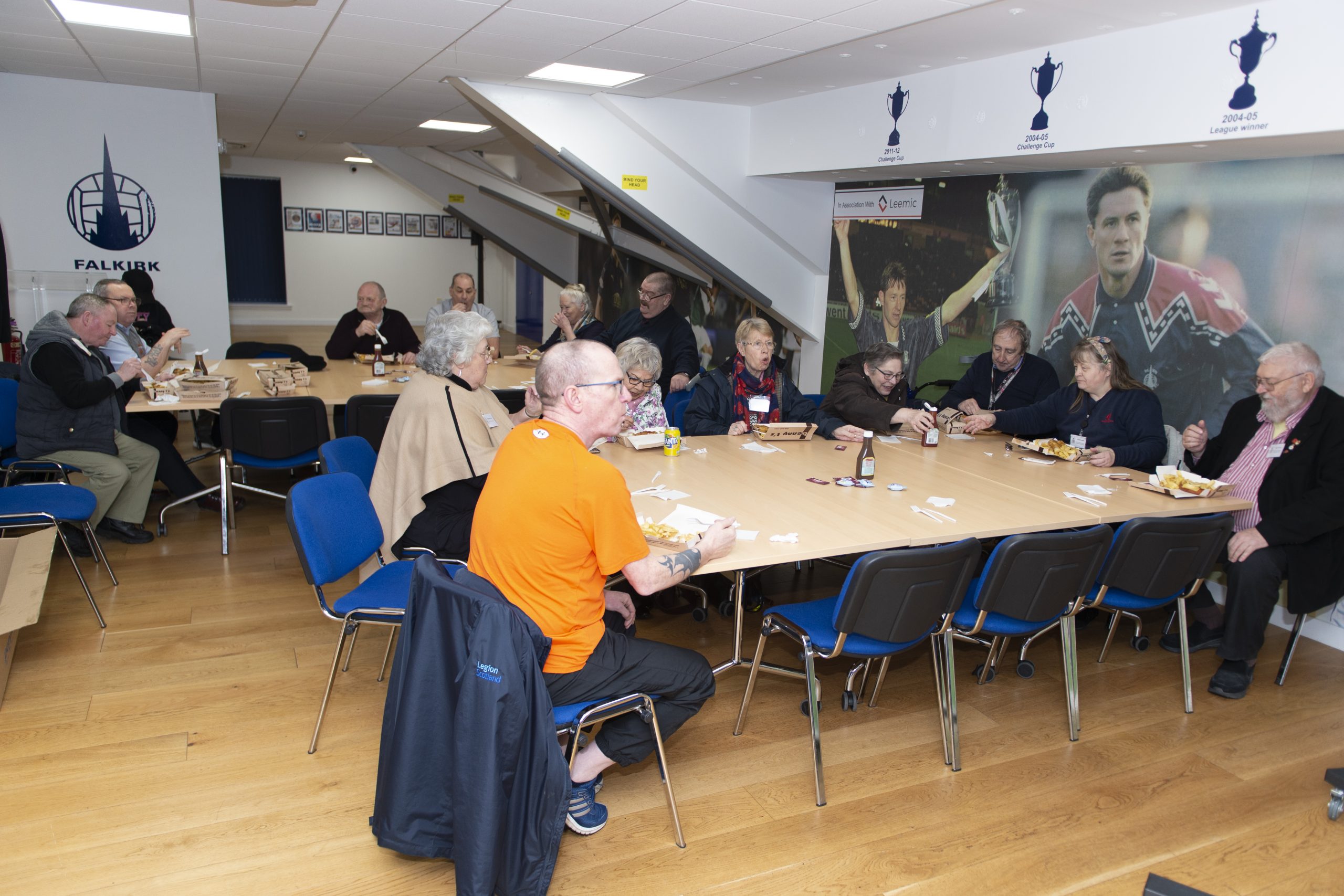 Last week Falkirk FC had the pleasure of welcoming the Wee County Veterans to the Stadium to enjoy a movie night in the South Stand bar and a fish supper from Benny T’s.

Thanks to our partnership with Legion Scotland and Poppy Scotland we were able to host the veterans on Friday, offering them a stadium tour, some time in the gym, dinner from our partners at Benny T’s and a movie.

This inaugural event was arranged in an attempt to combat loneliness and bring veterans together to enjoy each other’s company and make new friends.

The Wee County Veterans are currently involved in the Befriender Programme initiative which is aimed at preventing and reducing loneliness and isolation among locals who have served in the armed forces. Meetings like the movie night held at the Falkirk Stadium are  a great place for the veterans to come together, share memories and identify common interests.

Members of the group also participate in flag-raising ceremonies and Remembrance Day programmes, visits to Scottish Parliament and attending a monthly veterans’ breakfast at Weatherspoon’s in Alloa, which are just some of the activities on offer. The group first came together in September 2015 and is always open for anyone looking to get out of the house.

Brian Ward, the Events Manager at Legion Scotland said: “Legion Scotland has been delighted to work closely with Falkirk Football Club in recent years to facilitate a community hub for veterans in the region. The range of events laid on have afforded many veterans the opportunity to come together to share their love of football and to enjoy comradeship and support from likeminded individuals.

“It is so often reported that many veterans experience loneliness and social isolation and the Commercial Director at Falkirk FC, Kieran Koszary has been the driving force behind the Clubs plans to allow veterans to use the club facilities to help address this problem.

The inaugural veterans movie night at the end of February was a wonderful example of first class hospitality being shown to the veterans who attended and we would like to express our sincerest thanks to the Club and all staff, for everything they are doing to help veterans in the local community.”

Falkirk FC’s Commercial Director, Kieran Koszary added: “Our partnership with Legion Scotland and Poppy Scotland is one everyone at the club is extremely proud of and we were honoured to host the veterans on Friday night at The Falkirk Stadium.  This event was aimed at creating further comradeship and generating a platform to address loneliness and isolation as well as having some fun with old and new friends.  We are looking forward to many more initiatives over the years ahead to further support local veterans”.

Anyone interested in the Befriending Programme can call Jo Wilkinson, chair of the Clackmannanshire group on: 07914 123 329.