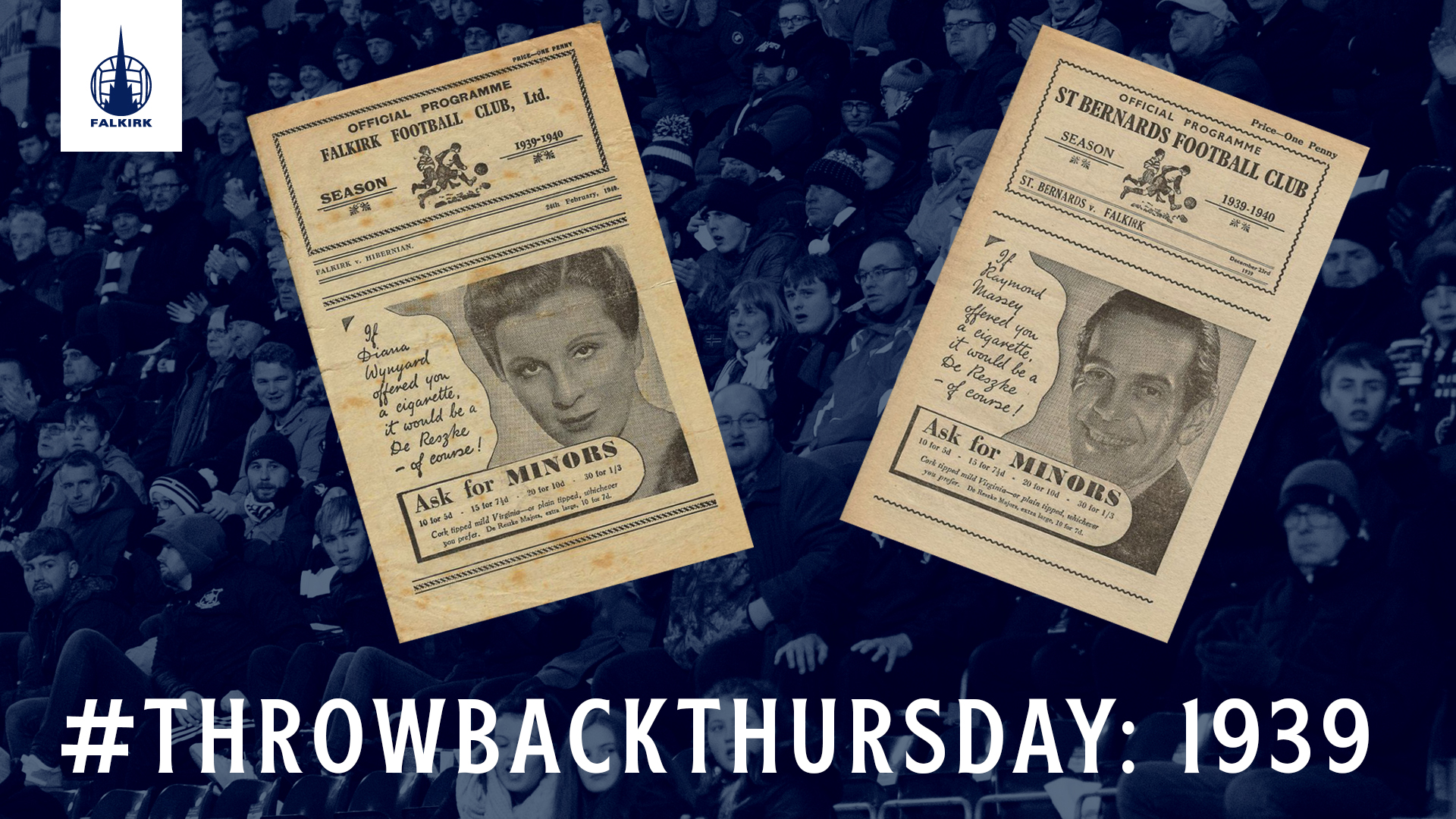 Our Club Historian, Michael White reflects on the current title race and it’s similarities to September 1939 in the first of our special #ThrowbackThursday features…

Falkirk fans who were at our last home game against Peterhead on Saturday March 7th felt pretty sure that the League One title chase was very much alive. Falkirk are one point behind the leaders, Raith, and the Kirkcaldy side are still to visit Falkirk – a title decider on the final day a distinct possibility. Little did fans at The Falkirk Stadium that day realise that they might have been watching the last game of the season and that the league table as it stood might possibly become the final table. The government have since introduced serious measures which impact on professional sport, crowds, travel and entertainment. But it is not the first time that this has happened – as the extraordinary events of 1939 showed.

By September 1939, it was a matter of when, not if, war would overshadow the lives of the people of Falkirk and district. Preparations were now at an advanced stage, and the first Glasgow evacuees had arrived at Falkirk High Station. The Falkirk Infirmary was to be evacuated and Air Raid advice was published in all the papers. Gas masks were to be issued to everyone, even babies, and lists of Air Raid Wardens Gathering Stations were revealed. Posts included the Ice Rink, The Steeple, Mitchell’s Dairy in the Howgate, Rosebank Distillery and Callendar Foundry.

The 103rd Light Anti-Aircraft Battery were looking for new recruits and the fear of an aerial bombardment was real. Football was proving an important distraction and the next League encounter saw Falkirk take on sixth place Queen of the South.

FALKIRK 2-1 QUEEN OF THE SOUTH

This match, played the day before the outbreak of war, saw Falkirk win narrowly, but continue to press Rangers at the top of the League. It was to be the last real league game for some time. The mood of the spectators was one of apprehension at the events that might be yet to come, and for 90 minutes at least they could enjoy the escapism of football. Falkirk deserved to win, but they found the Dumfries a hard nut to crack. Shankly was outstanding in defence, but Jimmy McPhie was facing tricky opponents in the visiting left-wing pairing of Law and Hay. Queens kept the Miller-Dawson threat under control mainly due to the outstanding form of their right back Savage.

Falkirk recovered well from the shock of losing the opening goal with only a minute on the clock. Law finally shot home after McKie had parried a great effort from Hay. Stewart equalized seven minutes later after combining well with Carruthers. Dawson and Stewart both missed easy chances and Queens gave as good as they got for the remainder of an exciting first half. One great effort by Oakes came back off the post with McKie beaten.

It was fairly even during the opening exchanges of the second half, but Falkirk gradually took control. Bobby Keyes scored what proved to be the winning goal with a fine low shot after beating off a challenge by Watson. The visitors were by no means out of it, and their outfield play caused Falkirk problems, but they lacked a real finisher.

The results for that Saturday September 2nd 1939 were as follows:

Falkirk 2 Queen of the South 1

This was to prove the last Saturday of league football for some time, and the league tables stood, as if frozen in time as a record of what was, and what might have been.

“It seems pointless now that this country is at war and football will be completely suspended for no one knows how long, to review the happenings of last Saturday in the sphere of local football. We shall always remember, however, that the Bairns finished with a win which made them the closest challengers to Rangers.”

Falkirk were a strong side and manager Tully Craig had strength in depth. The Reserves, too, were sitting near the top of their league, challenging Rangers. They signed off this all too brief season with a 4-1 win at Palmerston Park. This was undoubtedly a great Falkirk side in the making, and one destined to repeat the challenges of the years before the Great War. It is ironic that the onset of hostilities, on both occasions, proved to be the end of an era for the club, and was to ruin many a promising career. In the great scheme of things, however, football mattered little.

An immediate ban on football was expected and so it proved to be. As of September 3rd, professional football was banned. All contracts and agreements between clubs and players were suspended. The government had banned all forms of indoor and outdoor entertainment and the Council of the S.F.A. took the inevitable decision to cancel the League programme “until further notice.”

The evacuation of cities, the dangers of large congregations and unnecessary travelling meant that if football was to return, it would be on a regional basis. It had been a swift reaction, but in hindsight perhaps too quick. The provision of entertainment could have a positive effect in war-time as a boost to morale. Cinemas were closed, the Ice Rink was shut down and many found themselves at a loose end during that strange period of the “Phoney War”.

The early restrictions were soon lifted, and by September 15th. some sense of normality returned. The cinemas reopened, skating resumed and Falkirk Baths continued in business. There was to be a Scottish Ice Hockey League consisting of six teams-Dundee, Perth, Kirkcaldy, Dunfermline, Ayr and Falkirk.

These events have an uncanny resemblance to the present situation and the role of sport in general, and football in particular, to boost morale was a key factor.

Those supporters who bemoaned the absence of the league programme last week are now facing a long period without seeing their team in action. In the great scheme of things, football is NOT more important than life and death, despite Bill Shankly’s views. No league games, no Euro 2020 and a real prospect that leagues might be “frozen” as they were on the weekend of March 2nd/3rd are major talking points.

Back in 1939, Falkirk might well have been on the brink of a new golden era, able to challenge the Old Firm for major honours and becoming a team to be reckoned with. We will never know. As far as the record books go – Falkirk were runners-up to Rangers by a single point when the league table was caught in time. Could history repeat itself?