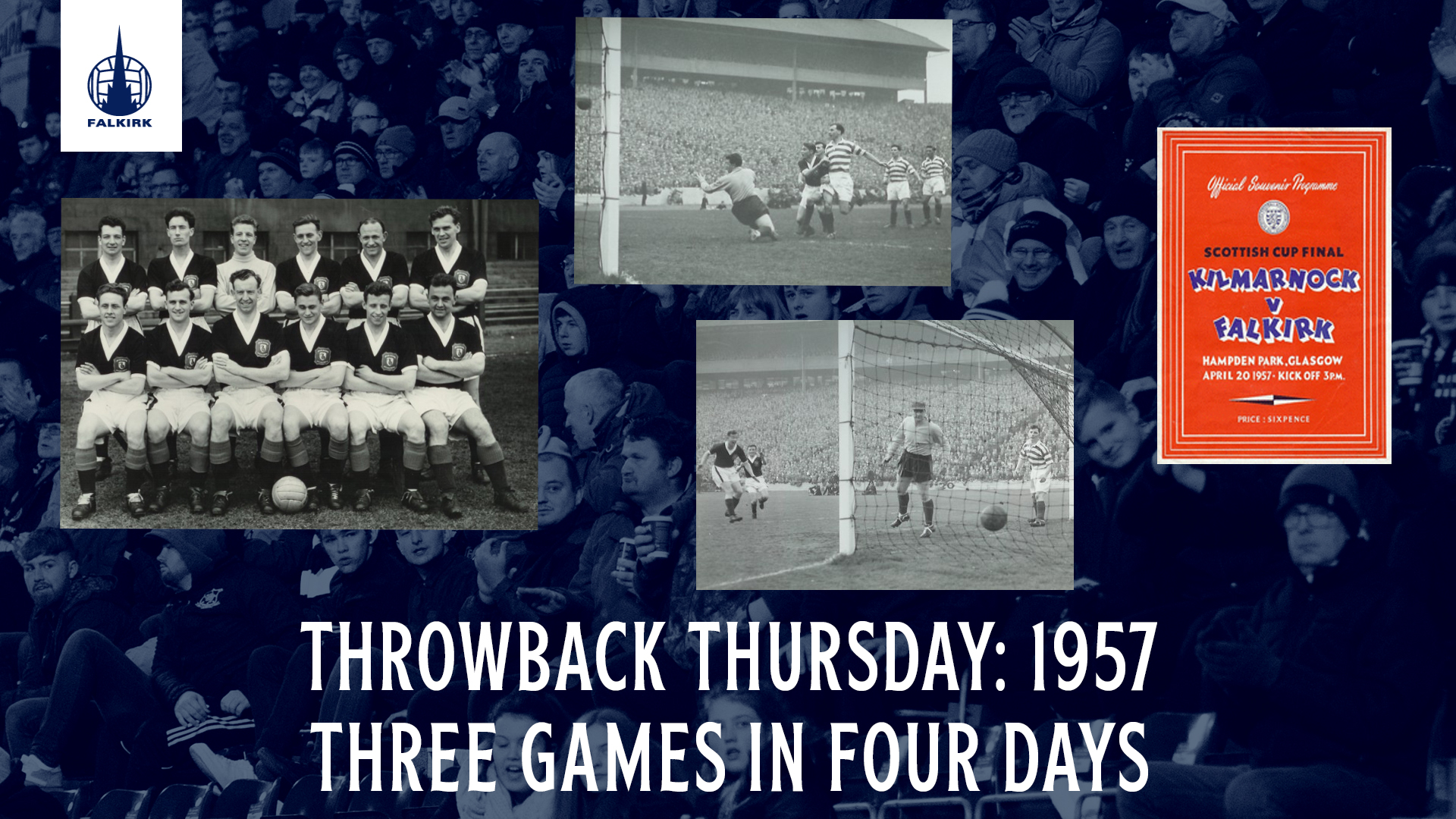 In our second Throwback Thursday feature, Club Historian, Michael White looks back at an extraordinary week in 1957 when the Bairns won the Scottish Cup and played three games in four days…

Falkirk was still suffering a collective hangover after the incredible scenes of Wednesday April 24th, 1957 when the Scottish Cup was paraded through the town after Dougie Moran’s extra time winner at Hampden Park against Kilmarnock. The celebrations went on through the night as the whole area seem to have headed for Newmarket Street to see their heroes return. People were standing on walls, on statues, clinging to lampposts and hanging out of windows in a night that will never be forgotten. But that was only one part of Mission Impossible for manager Reggie Smith and his men.

The main task for new manager Reggie Smith when he had arrived from Tannadice was to avoid almost certain relegation. The cup run meant that was a backlog of league games to be played and the fact that replays had been needed to see off Raith Rovers in the semi-final and Kilmarnock in the final only made matters worse. Incredibly, Falkirk were having to play three vital matches in four days. In the Fifties, football was not allowed to be played on Sundays. The relegation issues were all up for grabs, and the race to avoid the drop was between Falkirk, Dunfermline, East Fife, Queen of the South and Ayr United. Goals were important, but in those days, it was decided by goal average -not goal difference. Slide rules might have been needed in this equation.

At the other end of the table, Rangers were trying for two in a row, a feat that had already been achieved by a great Hibs side in the post-war era. They needed two points to clinch the title and only Hearts had a chance of stopping the Ibrox side. Football was still the main talking point in factories and workplaces, and it was still very much a working-class game. The main football talking points that week were Falkirk’s amazing cup win and Manchester United’s exit from the European Cup at the hands of a star-studded Real Madrid team. Northern Ireland had played well but went down 1-0 to Italy in a World Cup qualifier. Their right back was a certain Willie Cunningham and the Irish were confident that they could qualify for the finals in Sweden. Scotland Schoolboys beat their English counterparts 3-0 and the star player in navy blue was to find his way to Brockville a few years later. Goalkeeper Renucci of St.Mungo’s High School denied the English with a series of fantastic saves and he was to become one of the many goalkeepers tried by player-manager Tommy Younger in his time. The Scots side included two others who were to become Falkirk players later in their career – Craig Brown and Billy Little.

Falkirk fans, still on a high from the Cup Final, headed off to Kirkcaldy for the first of what they all hoped were games towards a Great Escape. Trains and buses as well as private cars carried a good Bairns support, but there was quite a shock when the teams ran out. Only four of the Hampden Heroes were playing, and there were fears that the Raith side would seek revenge for their semi-final defeat.

Raith were almost at full strength and looked – on paper at least – far too strong for this makeshift Bairns team. Their line-up was not far short of the eleven who had been beaten 2-0 in the semi-final replay at Tynecastle. Only Knox and McMillan were missing and  Raith started in determined fashion. Falkirk took the lead in 17 minutes, somewhat against the run of play, when Billy Sinclair scored after a real mix-up between keeper Charlie Drummond and centre-half Willie McNaught. Rovers had missed several chances and Bert Slater had been in great form. Inevitably, the home pressure told and Raith scored twice to give a better reflection of the play so far. Falkirk were dealt a cruel blow when John McCormack was badly injured in a tackle and limped through the rest of the game. There were no substitutes in those days, and Dougie Moran did well to provide support down the left of the Falkirk defence. McCormack was little more than a passenger and almost inevitably, Raith scored. McEwan took advantage of a deflection from a Young effort and then Williamson added a second. The 2-1 score-line looked enough to gain a modicum of revenge, but Reggie Smith’s fitness regime proved crucial. Amazingly, Falkirk found new strength and George Merchant levelled the scores in 77 minutes. The popular centre forward had been one of the best Falkirk players and he had given McNaught one of his most troubled games.

Schemer-in-chief Derek Grierson was another star and he was unlucky to see an effort come back off the crossbar with Drummond beaten. The away support was quite hopeful that the single point might be enough, especially with two home games to come, but not the players. Five minutes after the Merchant goal, Derek Grierson scored what proved to be the winner, when he headed home a cross from Willie Sinclair with eight minutes left for play. When referee Smith blew for full time, the players were cheered off. This makeshift side had gained two precious points against all the odds.

There were two games to go and Falkirk were not yet safe. The clubs in danger were only separated by two points, with Ayr looking doomed. Falkirk had 26 points, while Dunfermline, East Fife and Queen of the South all had 24 points.

Brockville was packed less than 24 hours later, and hopes were high that the gathering of another two points would prove First Division security. The Scottish Cup was paraded round the track by Bobby Orrock, who had captained the 1913 cup-winning side. There was hardly a blade of grass of the park as the cup-winners ran out to huge cheers from a capacity crowd. Only Alex Parker was missing, as he was unable to get further release from his National Service officers. Jimmy McIntosh who had played at Raith on the previous evening took his place. Motherwell were a talented side and clearly were not in holiday mood. They won 2-1 to spoil the party and Tommy Murray’s goal was not enough to send the fans home in a more relaxed mood. Pat Quinn’s penalty and a goal from Willie Hunter ensured that the race to survive would go down to the wire. Rangers had beaten Queen of the South 3-0 in Dumfries, Dunfermline had gone down 3-1 at Broomfield, but East Fife had won 5-2 against St.Mirren at Bayview. East Fife looked to have survived, as Queens would need a 16 goal win to catch them – highly unlikely.

Sunday was a rest day! Monday was not. It was another game at Brockville – this time against Partick Thistle. It looked as though Falkirk might just be safe, but it wasn’t mathematically certain. Falkirk’s goal average was better than their rivals, but all worries disappeared with an emphatic 4-1 win over The Jags. Alex Parker was still missing with Jimmy McIntosh again proving an excellent deputy. Derek Grierson was replaced by Tommy Murray, with Willie Sinclair coming in at outside right. Falkirk were deserved winners with the goals coming from Tommy Murray (2), John Prentice and George Merchant. The players must have been running on empty, but they gave their all and fully deserved their standing ovation at full-time. What an achievement- Scottish Cup winners and an amazing escape from relegation.  In the end, Dunfermline were relegated in literally the last minute of the season. Queen of the South had drawn 0-0 at Parkhead, but Rangers scored in the last minute to win 4-3 at East End Park. A 3-3 draw would have ensured The Pars safety for another season.

The players and manager deserve great credit for their achievements. Their fitness, application and determination rescued what looked like a hopeless situation when Reggie Smith arrived. His emergency fitness programme certainly proved a key factor and the team responded with incredible levels of exertion in extra time. It is a great pity that the Board didn’t build on this success and strengthen the team. Reggie Smith became disillusioned and moved back to England. The cup-winning side was a great blend of youth and experience and new signings were needed to replace the veterans such as Wright, Irvine, Prentice and Merchant. It was a season to remember- and it only really started in February.