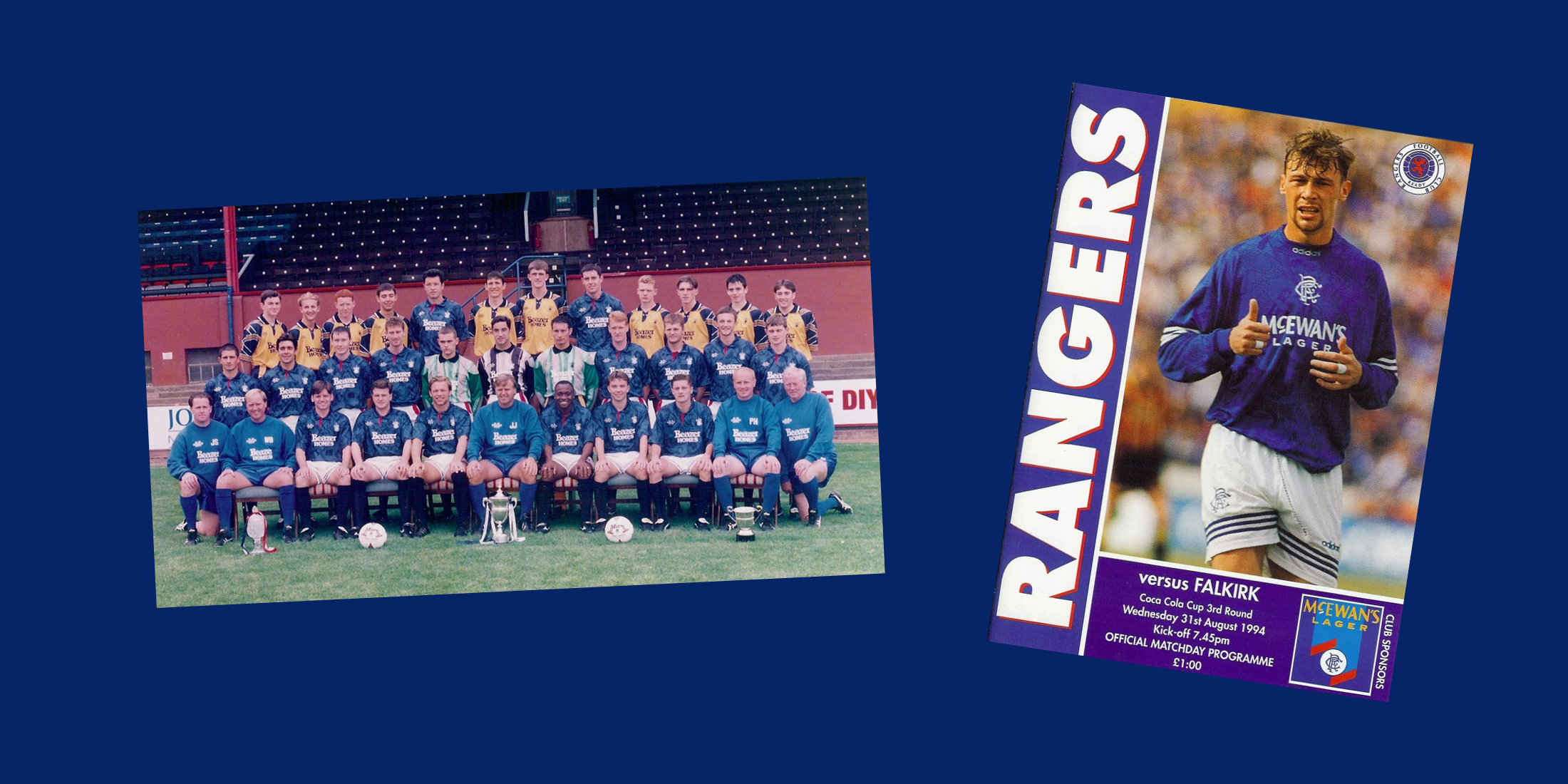 Some may remember the Four Seasons hit song-December 1963, which contained the lyrics,

What a very special time for me

As I remember , what a night 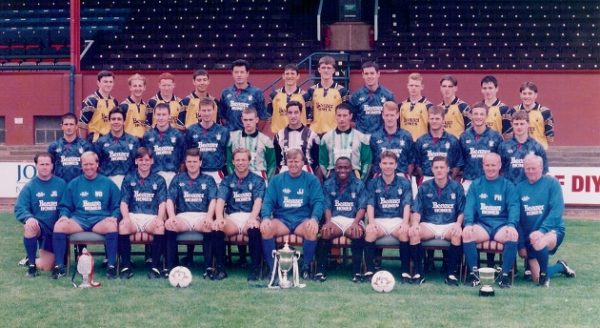 Change December ’63 for August ’94 and you could have a tribute to one of the greatest wins in the club’s recent history- and one of the most memorable individual performances from a Falkirk player. Anyone who was there will surely rate this as one of the best games ever and thankfully, film of the game exists.

Cadette was to have an outstanding game and made all the headlines after a stunning performance in front of over 40,000 fans, most of whom left shell-shocked after three consecutive home defeats.

Falkirk moved into the quarter-finals of the Coca Cola Cup and fully deserved their sensational victory.

The Broomloan Stand was a mini-Brockville, as the Falkirk fans roared their side on.

All the big Rangers names were playing. This was no weakened side. The opening period showed that Falkirk were not afraid of Rangers, and Colin McDonald had a great early chance, which Goram did well to save. Eddie May almost connected with the loose ball, as the Falkirk fans rose to acclaim a goal. Scott MacKenzie set up Eddie May and Goram again saved, before Richard Cadette opened the scoring in 28 minutes. McDonald and Cadette combined well and RICHARD CADETTE sent a great shot high into Goram’s left-hand corner.  From the Broomloan Stand, it was difficult to see the action, but the time delay ended when the yellow-shirted Bairns players wheeled away in delight. Everyone expected a Rangers comeback and chances fell to Gordon Durie. It wasn’t all backs to the wall stuff, and Falkirk threatened in breakaways. At half-time, Falkirk led 1-0 and fully deserved it.

Rangers, inspired by the talented Laudrup, came at Falkirk with all guns blazing in the second half. McGowan cleared one effort off the line after Parks had saved from Laudrup, and Hateley was only inches away from connecting with a Durrant cross. A goal looked inevitable and it came in 64 minutes. MICHAEL LAUDRUP started and finished the move, linking well with Durrant and Hateley.

Many feared a Falkirk collapse, but they rallied and in 76 minutes, RICHARD CADETTE  scored a brilliant second goal.The expressions on the faces of the Bairns support as he bore down on Goram were a joy to watch. Slowly the anticipation gave way to realization and the entire section rose as one. Fulton threaded a great pass through and Cadette took full advantage of the hesitation in the home defence.He looked up to check Goram’s position and hit an unstoppable shot. The Rangers fans decided enough was enough and many left, venting their disapproval. The Falkirk supporters sang their hearts out and willed their heroes home.

When referee Timmons blew for time up, the Broomloan Stand lower section was a scene of total and absolute delirium. The players took the plaudits and the singing and dancing continued for a long while afterwards.

Cadette grabbed the headlines, but it had been a tremendous team performance and a night to remember.

The result from Ibrox made all the headlines. Falkirk had beaten the cup holders and reigning champions- on their own park and in front of their vociferous support. The Rangers side had been assembled at a cost of millions and were all Internationalists. By contrast, Jim Jefferies had paid £35,000 to Brentford  to obtain the signature of Richard Cadette. Cadette had acquired a bit of a reputation in England, and he admitted, “A lot of bad things were said about me in England and that had a lot to do with me deciding to come to Scotland in the first place. I developed a bit of a reputation as a troublemaker with a bad attitude. I felt it was unfair, but it stuck. The problem was I was a little guy playing for a team that smashed long balls from one end of the park to the other. That was no use to me, and I made my feelings known to anyone who would listen.”

Jim Jefferies was less than impressed when his new signing arrived at Brockville. “He couldn’t shoot straight and failed to score from even a couple of yards out.” Cadette and Jefferies had a frank discussion and the striker increased his shooting practice. This game was a just reward for lots and lots of extra effort. The manager was full of praise for the way Cadette continued to give 100% despite his unsettled domestic situation.

Falkirk hadn’t won at Ibrox since 1927 and the players were obviously elated. Goal-hero Cadette  said, “I was delighted to grab those goals because I’ve been here before a couple of times and been well and truly spanked.” Cadette was a very popular player with the Falkirk support and fans were often heard singing his praises in chants and songs. The player appreciated that Scottish Football in general, and Falkirk in particular, had been good to him, but he still wanted to move back South. He undoubtedly had played many memorable games in his career, but it is debatable if his career scrapbook would ever include such personal headlines as he made that night in Govan.

CADETTE IS FALKIRK’S REBEL WITH A CAUSE.

CADETTE AT DOUBLE TO DUMP GERS.

CADETTE PILES ON THE PRESSURE IN IBROX KO.

Richard Cadette was one of the most popular players at the club during the Jefferies era. Born in Hammersmith, he first came to prominence at Wembley in non-League football. He was signed by  Orient and went on to score four goals in 19(2) matches before moving to Southend United. At Rootes Hall, he quickly established a reputation as a prolific striker, and his return of 49 goals from 90 starts is impressive. He was voted as The Shrimpers Player of the Year for 1985/86 and was twice nominated in the PFA Fourth Division Team of the Year

Sheffield United signed him for a sizeable fee, reportedly £90,000, but he returned to London and signed for Brentford. After a loan spell at Bournemouth, he was spotted at Brentford and signed for Falkirk in 1991/92. At Falkirk, he renewed acquaintances with former team-mates Tony Parkes and Eddie May. He made a big impact with his pace and his uncanny ability to hold the ball up. He won the SPFA  First Division Player of the Year award in 1993/94 as well as the Sports Writers Award. His greatest game in a Falkirk shirt was undoubtedly the Coca Cola Cup tie at Ibrox, when his two goals clinched a memorable win. He found it difficult to settle with his family in the area and he left Falkirk in October 1994 for Millwall. His English League career ended at The Den with 5 goals from 19(5) appearances. After this, he played with Shelbourne in Ireland and made 4 appearances for Clydebank in season 1997/98, scoring once. He ended his playing career with Gloucester in non-league football, before taking up coaching duties in the Millwall youth set-up.

His only management venture was with Tooting and Mitcham where he was in charge from 2002 until 2006.

The little striker scored 86 goals in English football, but his career at Falkirk could well have seen him at his best. He had returned to Falkirk for the Millennium Dinner in the Inchyra Hotel and the reception given to him showed just how fondly remembered he was.

SPFA Player of the Year Division One