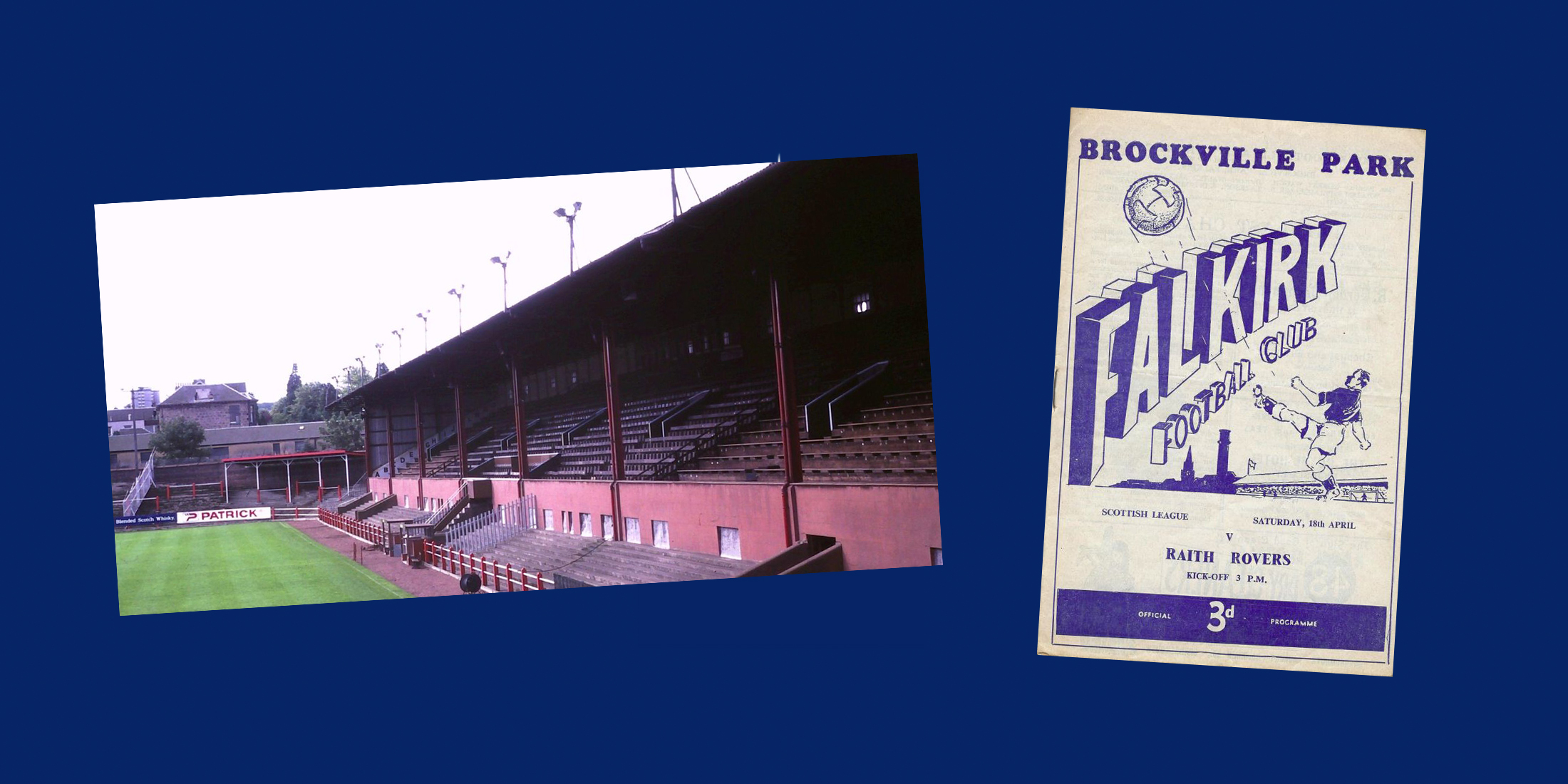 Some days will live long in the memory. Cup Finals, high-scoring encounters, devastating disappointments- are all part of being a Falkirk fan. Those who were there at Brockville on Saturday April 18th, 1959 will never forget the day when they saw the team lose their place in the top flight and herald the end of the fairy-tale that was the Reggie Smith Era. The cup final success of 1957 had been followed with a relatively successful league campaign in 1957/58 when the club finished in tenth place. Behind the scenes, however there were frustrations at the lack of investment in the playing staff and several supporters knew that the cup-winning team had contained a few who were reaching the veteran stage. Alex Parker and Eddie O’Hara had been transferred to Everton at the end of the season and there were a few new faces, including a youngster signed from Alloa by the name of John White.

The League Cup campaign saw Falkirk in a section along with Kilmarnock, Hibs and Aberdeen and the alarm bells should have been ringing when Falkirk finished bottom with a meagre three points from their six games. A 2-1 win against Kilmarnock at Rugby Park and a 1-1 home draw against The Dons were the only successes. There was a real shock when Dundee won 5-2 at Brockville in the opening league encounter and it was the sixth game before a win was recorded- a commendable 3-2 win at Easter Road on October 4th. It looked as though the team had turned the corner with a 4-3 win at Parkhead when John White scored on his first team league debut. It was to prove to be a false dawn, and the results meant that Falkirk were struggling and looked to be facing yet another relegation battle.

That battle was going to include Queen of the South, newly promoted Dunfermline, Clyde, Raith Rovers and Aberdeen. Falkirk did their cause a power of good with a thumping 5-1 win over Aberdeen at Brockville on February 21st, but little did Bairns fans realise that this was going to be the last win of the season with eight games still to play. In typical Falkirk style, they produced a shock result when the held eventual champions Rangers to a 5-5 draw at Brockville on March 14th in one of the most amazing games ever seen at the old ground. Falkirk had led 4-2 at half time and then Rangers led 5-4 deep into injury time. The game ended in a near- riot when Rangers keeper Niven was shoulder charged by Oliver and Wright and the keeper with the ball still in his grasp was bundled into the net. The result gave a false hope, and the disappointments came with indifferent performances against Dunfermline (1-4), Queen of the South (1-2), Kilmarnock (1-4) and Clyde (2-3). Despite this- there was one last chance of escaping the drop. Going into the last game of the season, both Falkirk and Dunfermline were on 26 points. Falkirk faced Raith at Brockville, while The Pars entertained Partick Thistle at East End Park. Dunfermline were behind on goal average and needed a big score to ensure their survival. 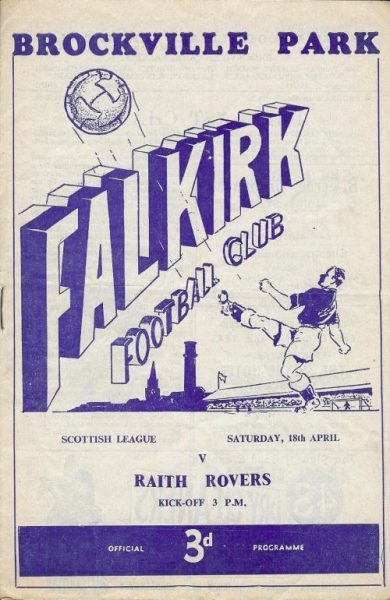 It was almost two years to the day since Falkirk had won the Scottish Cup and seven of the Hampden Heroes  took the field for this vital relegation battle. It was a terrible performance and the team played without passion and fight- the qualities that had brough success in 1957. Falkirk looked like a side that hadn’t won a game in ages, and to be fair, Raith weren’t really offering much resistance. The standard of football was awful and there seemed a lack of any ability to find a man with a pass. Chance after chance was passed up, and the crowd started to fear the worst. ALFIE CONN, the former Hearts star, scored the opening goal after 12 minutes, when a McEwan cross rebounded off Richmond’s back. The Falkirk centre-half had a real nightmare match and Raith led 1-0 at the break.

The home support was looking for an improvement in the second half, but it was Raith who increased their tally four minutes after the interval when JIM KERRAY dribbled past Slater and Richmond to fire home. The boos rang out from the Falkirk support and there was a great deal of slow handclapping. Chance after chance was missed on a rock-hard surface and finally scored. EDDIE WHITE, in one of the rare games when he played alongside his brother John, got the goal and when he added a second there was little cheering from the terraces.

The moment that every Falkirk fan remembers from the game was the award of a penalty for The Bairns by referee Stewart. There was no sign of a rush of volunteers to take it. John White took the ball and placed it on the spot. Raith keeper Charlie Drummond seemed to be offering a huge amount of space for White to shoot at, and some observers seemed to recall the goalie pointing to a particular corner. White ran up and hit the ball firmly enough. It hit the crossbar and ended up in the Hope Street terracing. The game finished 2-2, but everyone wanted to know if a point was enough. Bert Slater was visibly upset as the teams ran off at the end and many realised that if the club went down, the better players would move on and manager Smith could well move back South. The heroics of April 1957 seemed a long, long way away. 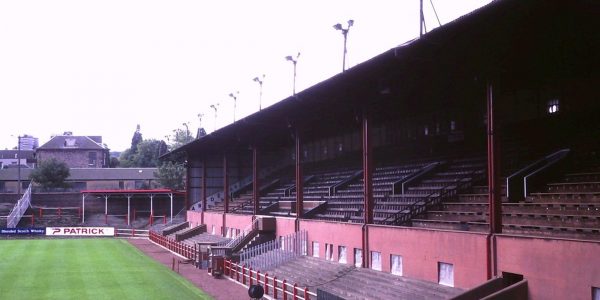 In those days, there were no mobile phones, no coverage of Scottish Football on the radio, no live football on TV programmes  and no internet. Communication for football fans was by the BBC Radio Sports Report at 5.00 p.m. Most football fans relied on the Saturday evening Sports papers delivered by vans to every newsagent or street corners all over the country. Living in the Falkirk area, they were spoiled for choice, being able to receive copies of the two Glasgow papers, The Evening Times and the Evening Citizen, the two Edinburgh papers, The Evening News and The Evening Dispatch, and -slightly later in the evening – the Dundee Evening Sporting Post. Falkirk fans would gather at the bus station, opposite the steeple or at various newsagents and wait for the screeching of brakes which heralded the arrival of the van carrying the bundles of papers. They were invariably thrown out of the van at speed and the vendor had the penknife ready to cut the string.

The production of these papers was well planned given the technology of the times with certain pages prepared well in advance. The last- minute printing of the results was a real scramble and many of the match reports were mainly of the first half action, with only a few words of the second half if the reporters were able to get to a phone. The results were printed and if there was a late finish, the score would be given like this: RANGERS X CELTIC X see Stop Press.

There were no computers in those days, and all reports were phoned in for a copy typist to take the call. Names of players had to be spelt out and the entire operation was stressful, nerve-wracking- but very impressive.

And so to the evening of Saturday April 18th, 1959. We waited at Charing Cross in Grangemouth opposite Las Scala in a shop doorway. After what seemed like ages, a white van appeared coming down Bo’ness Road at some speed. The two parcels were duly ejected by the driver’s helper, and the poor seller was almost crushed in the rush to get our hands on the papers. I can remember it well- and almost in slow-motion. The front page was scanned at pace. Football Results. Scottish League Division One……Fingers moved down the list, seeking the key result.

QUEEN OF THE SOUTH 0 MOTHERWELL 5

Nerves were shredding as the paper was turned over in a frantic search for the Stop Press column. There it was.

What? No. It’s a misprint. It can’t be true. My pal had an Evening Citizen. I had an Evening News. Simultaneously, we let out a shout, which contained what my grandparents would have called a “bad word”. Ten? T-E-N? It was true. Dunfermline had won by a ridiculous score. Melrose had scored six, Smith two and other goals came from Dickson and Peebles. Falkirk were down- by a point. There was no great escape this time. The result was accepted by the powers that be and no investigation was asked for. It was a sad, sad ending to the season and condemned the club to the Second Division and a period of massive disappointment. Lessons should have been learned by the Board and a great chance to build on the 1957 success was missed. The subsequent appointment of Tommy Younger as player/manager was to compound the misery.