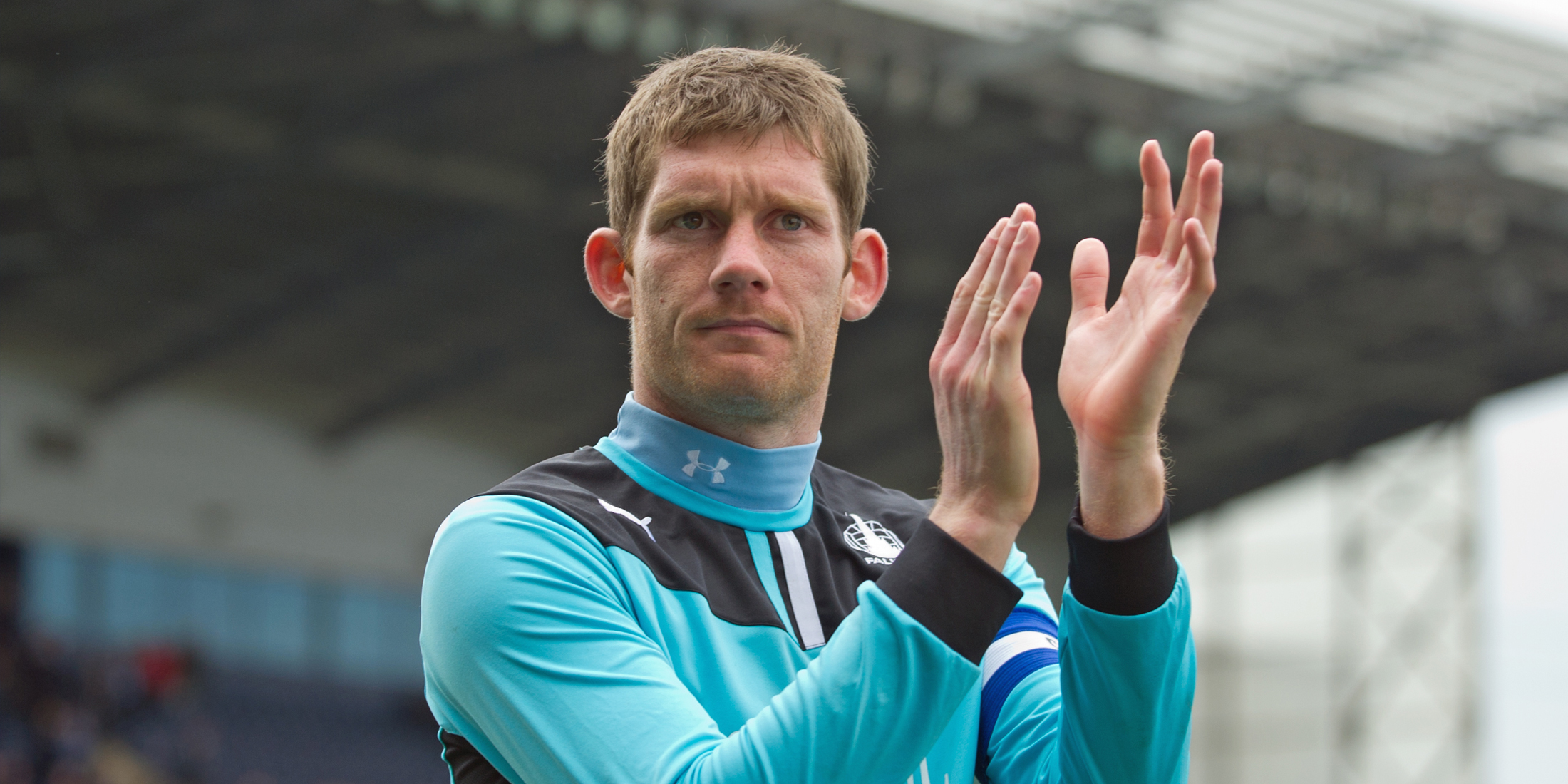 The Northern Ireland international, who plays with Norwich City in the English Premier League, spoke about his time with The Bairns and other events in his career.

After leaving the Celtic academy as a young keeper, Michael failed to make a mark at Dundee United before getting his break in the highlands with Ross County.

“It was a great experience in terms of getting some games. As a young goalkeeper people are often reluctant to give you a chance. People kept saying to me I didn’t have enough experience, but no one wanted to give me any!”

“Ross County gave me that chance, they gave me games and they enabled me to get experience in football, so it was a great start to my career, and I enjoyed my time up there.”

The highlight of his time in Dingwall was a famous cup upset; a 2-0 defeat of Celtic in the 2010 Scottish Cup semi-final at Hampden.

“I saw recently it was the ten-year anniversary, I saw some clips online about that and it brought back a lot of good memories.”

“That was my first season playing regular first team football, and to do that towards the end of the season was something very special. At the time it was a huge upset and it was great to be a part of it.” 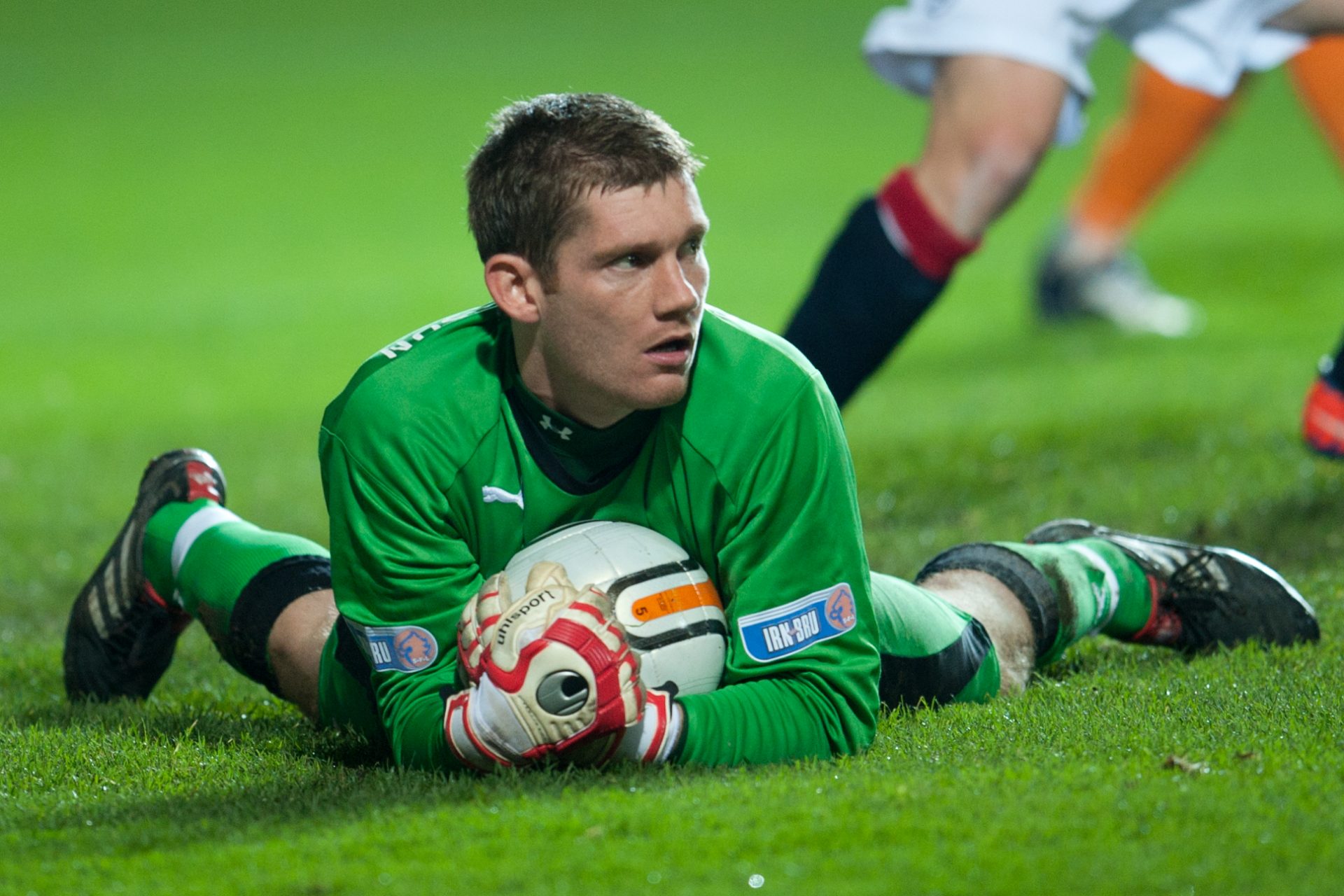 The young goalkeeper made the move from Ross County to The Bairns after 2-years at Ross County, a move he was looking for.

“The second season at Ross County we didn’t do so well, and we stayed up in the league towards the end of the season. My wife was still living in Glasgow at the time, she couldn’t move up to Dingwall because of her work. I was doing a lot of commuting and wanted to be back down towards the central belt, then the opportunity came to come down to Falkirk.”

Michael’s first season at The Falkirk Stadium was one of the most memorable in recent years, with an exciting young team under Steven Pressley that exceeded all expectations.

“The first season especially, from a personal point of view, was brilliant. I was back living with my wife and on the football side of things it was one of the most enjoyable seasons of my career. Working with Steven Pressley, and working some fantastic young players, it was great to be involved at that time and I really enjoyed that season.”

“When I first came in Falkirk had recently been relegated and there were some problems behind the scenes, so there was just a handful of older players and it was sprinkled with a lot of young talent.”

“No one expected us to do anything that season, there was a lot of doom and gloom at the start but I think we brought the feel good factor back and it just got better as the season went on, the fans got behind the team, and everything started feeling really positive.” 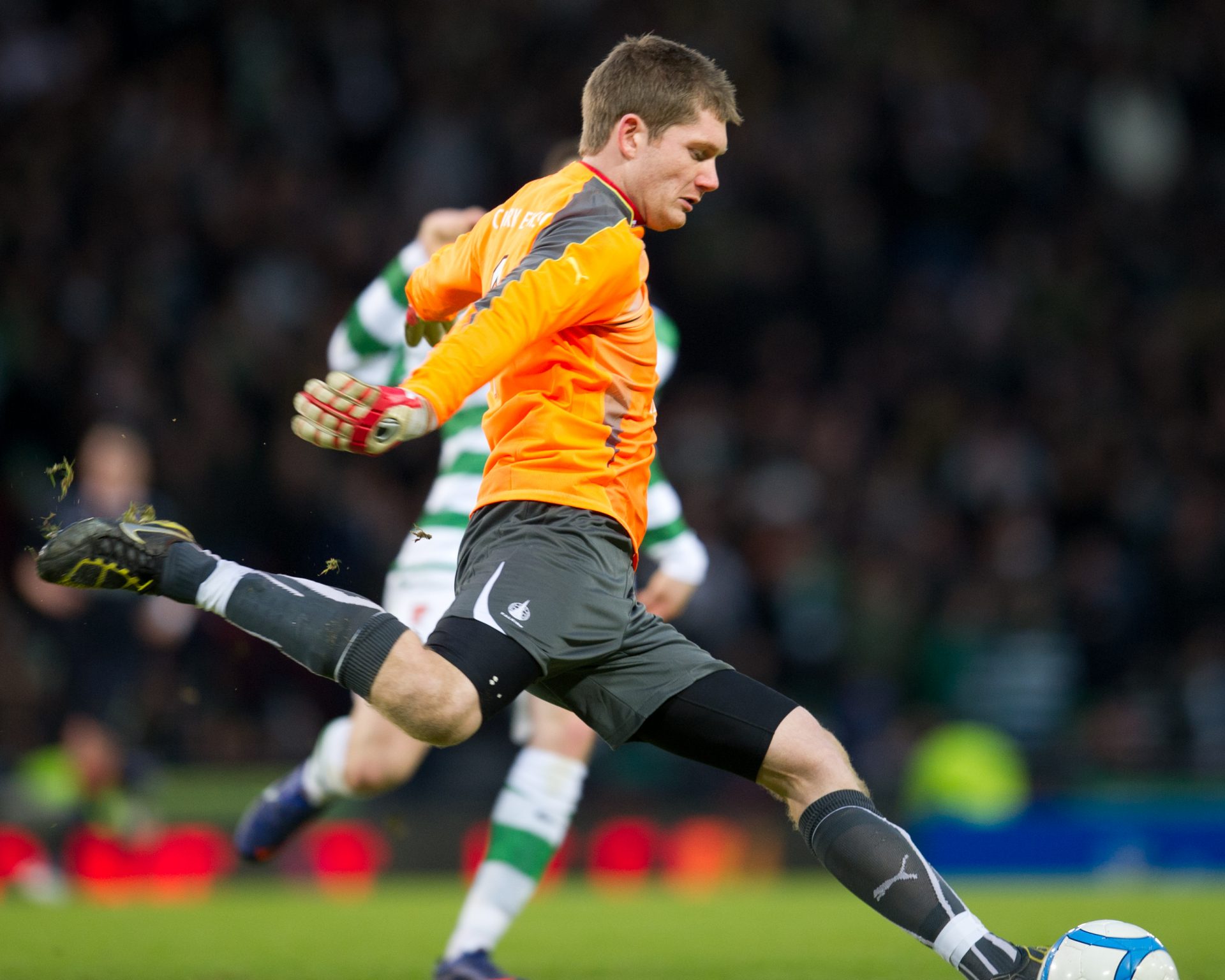 The Norwich stopper looked back on some of his favourite games while playing for The Bairns.

“The 3-2 win at home against Rangers, that was brilliant that night, one of the most memorable nights I’ve had, and I really enjoyed it. It was a crazy game, to be two goals up was a bit surreal, then they obviously brought it back to 2-2 and Mark popped up with a free kick in the last minute. The scenes when the free kick went in were sensational.”

“Winning the Challenge Cup was nice as well; it was a good day out. It was nice to have something to show for that season, it was such a positive one and there were so many highs. We obviously didn’t win the league, but we were up there most of the season and it was great to get a medal.”

“The thing I remember about it was Doddsy, he was 36 at the time and it was his first medal in professional football. It was great for him to win that towards the end of his career and we were delighted for him, as well as everyone else connected with the club.” 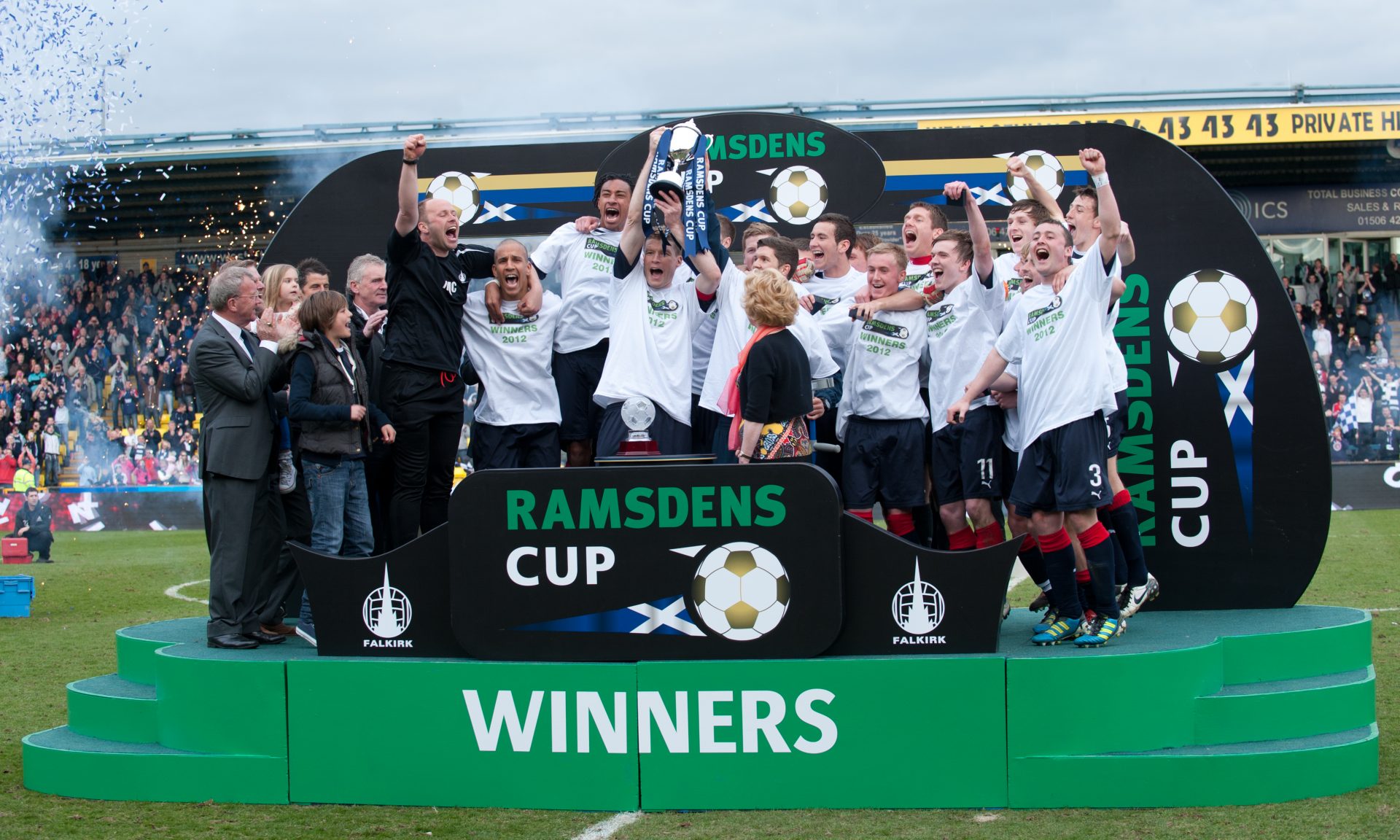 “It was brilliant. From a personal point of view, I thought I’d played well that season and to get the recognition from the fans and the awards was great. It’s nice and everyone likes to be well thought of, but first and foremost it was great the team did well. Doing well in the league and cups, loads of positives, with personal accolades on top of that, it was perfect!”

“There’s been some good goalkeepers that have played for Falkirk, to be mentioned in the same breath as them is an honour.” 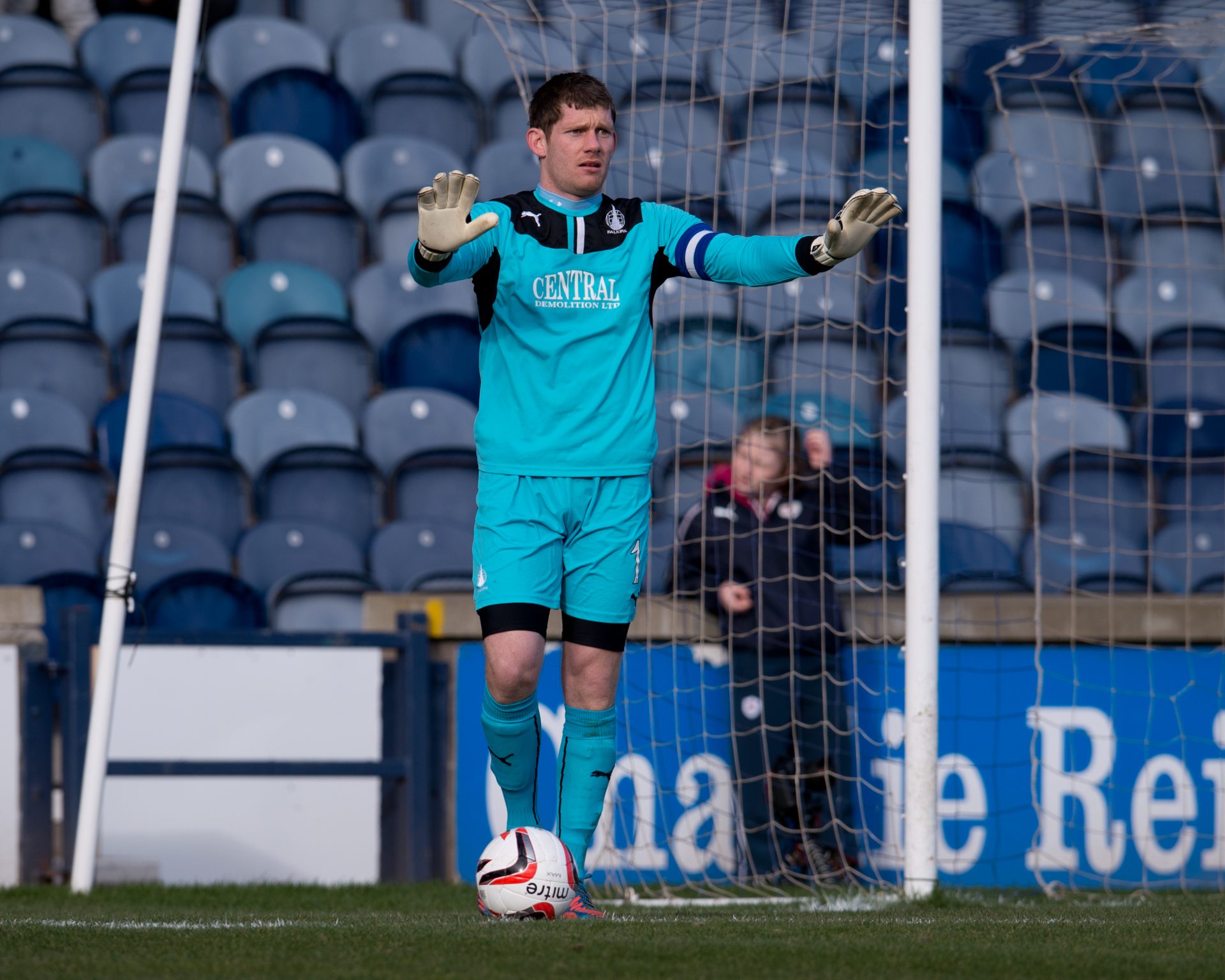 After the departure of Darren Dodds; Michael was named Bairns captain, a responsibility he also carried at Hamilton.

“It’s nice to be named captain, and a fantastic honour. It’s not something I really seek out, I don’t go into clubs trying to be captain, but people obviously think I have some qualities that I can lead.”

“I’ve always been that type of character, I’m not overly vocal or a loud one in the changing room but equally I’m not the quietest. I try to lead by example on the pitch and off it, in how I conduct myself on the training ground and trying to be as professional as possible.” 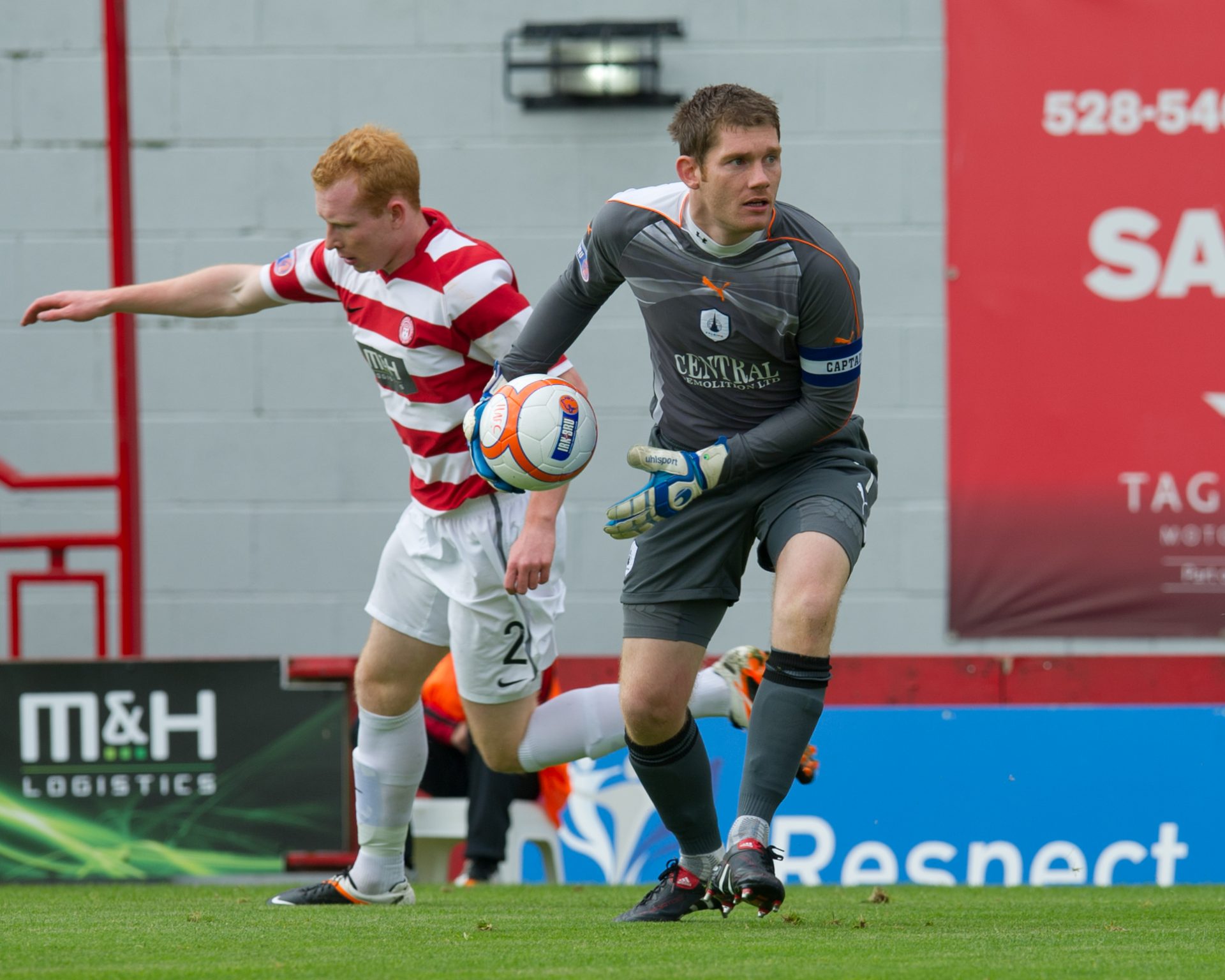 Michael finished discussing his time in Falkirk by talking about the Falkirk fans.

“I had a great relationship with the fans. In my opinion, Falkirk should be in the Premier League with regards to the fanbase, it’s a really good following. It’s a one club town with supporters that are really passionate and love their football. I loved playing for them and really enjoyed my time there.”

“I look back at my time at Falkirk with great memories and I always look out for them. It’s a shame to see them where they are at the moment, in terms of League One. I think Falkirk should be in the Premier League, they have the fanbase to do it, in terms of Scottish football they’re like a sleeping giant.”

“There’s so much potential to the club and I hope to see it at the top sooner rather than later.” 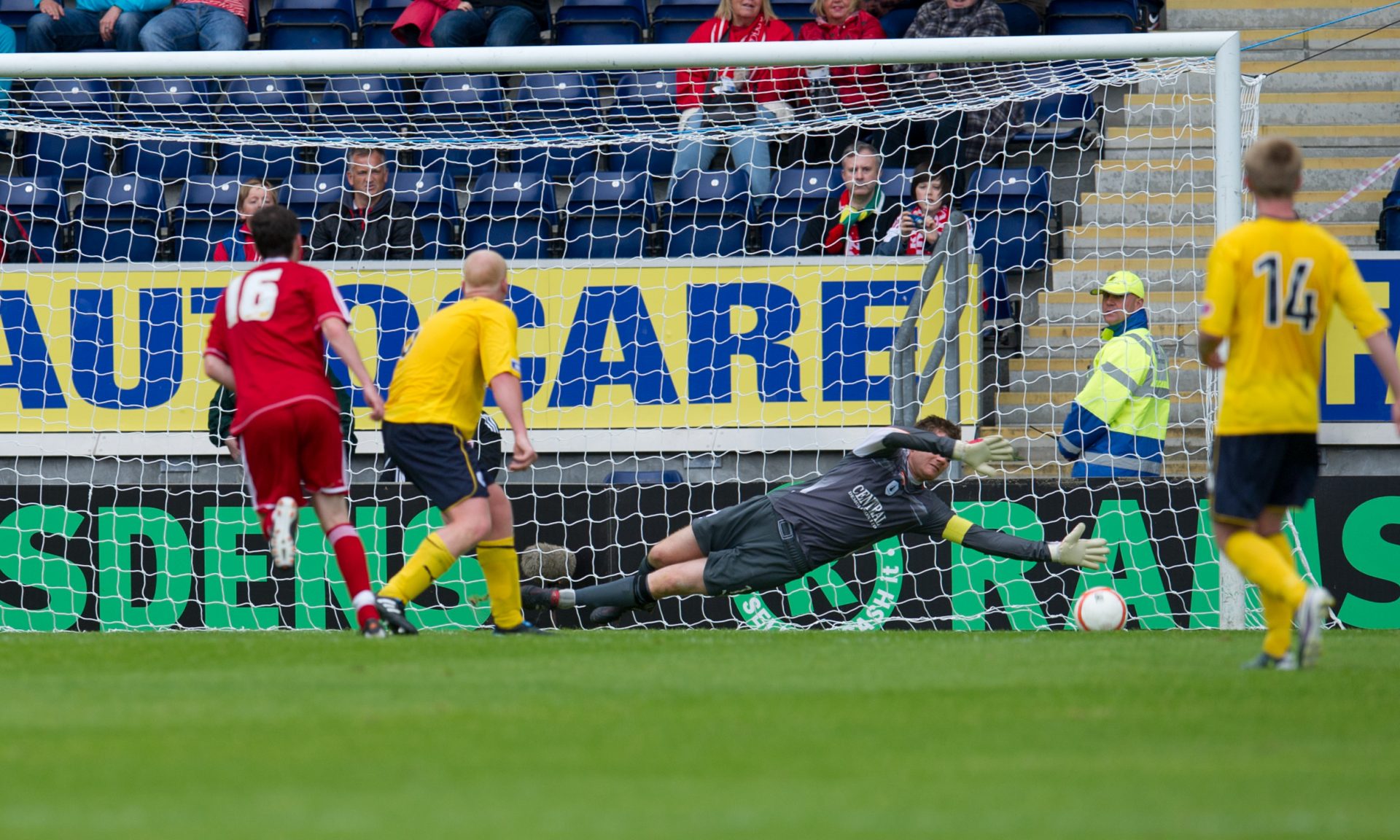 From Falkirk Michael moved to Premiership side Hamilton. He spoke on his decision to move to the South Lanarkshire side.

“Playing for Hamilton was enjoyable for different reasons; it was a chance to move up to the Premier League. Some of the Falkirk fans gave me a little bit of stick because I left, because Hamilton are probably a smaller club, fanbase wise anyway. I was quite dispassionate with the decision; it was just to play in the Premier League and step up in my career and looking back I think it was probably the correct one to make. I loved Falkirk; it was nothing to do with the club it was just the league they were playing in.” 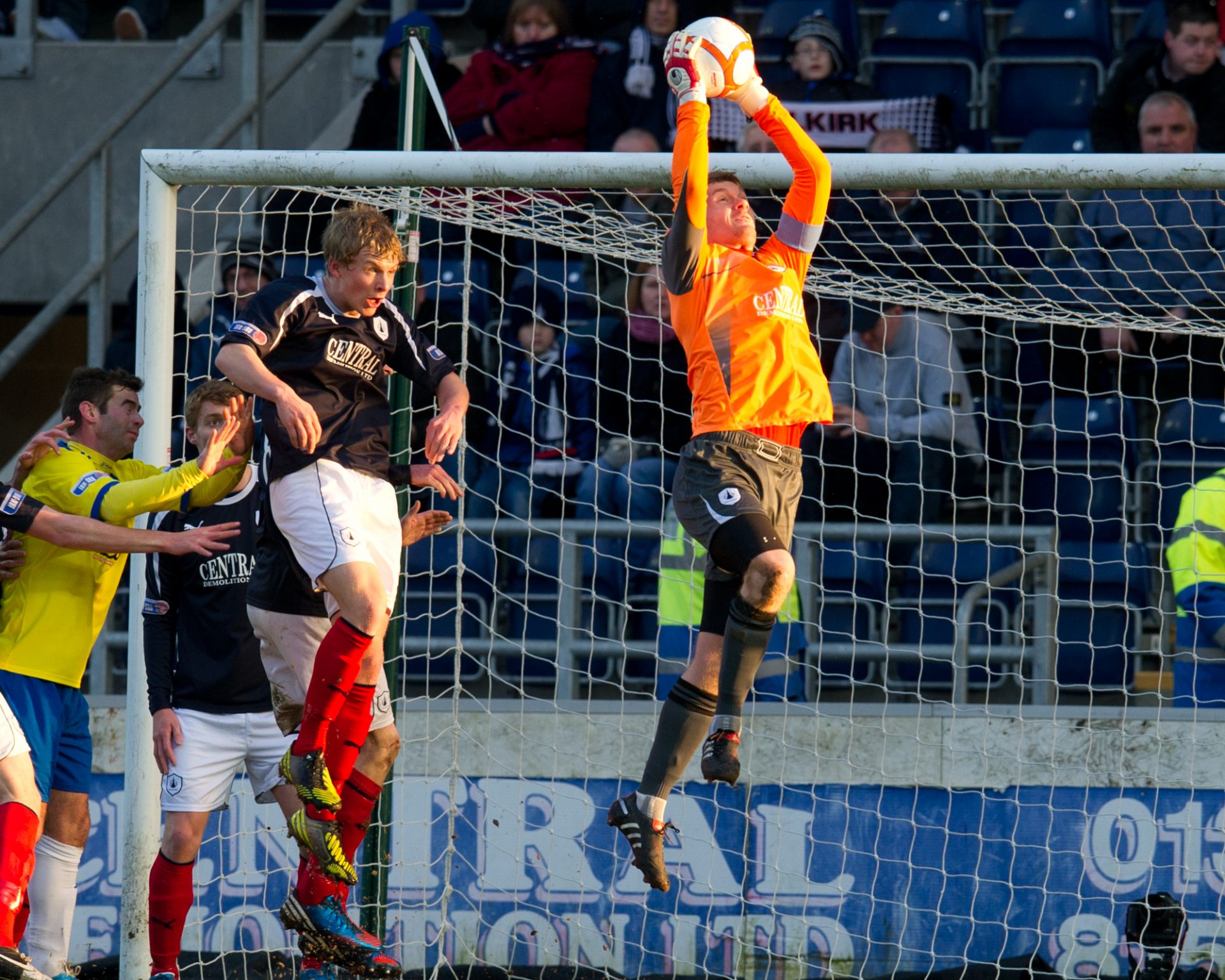 “It was a big step; everyone wants to play at the highest level possible. It was something that had been bubbling in the background and there was some interest from a few different Championship teams.”

“I was always going to go down to England that summer I think, to which club I didn’t really know. I decided to go to Norwich and work with my old manager Alex Neil.” 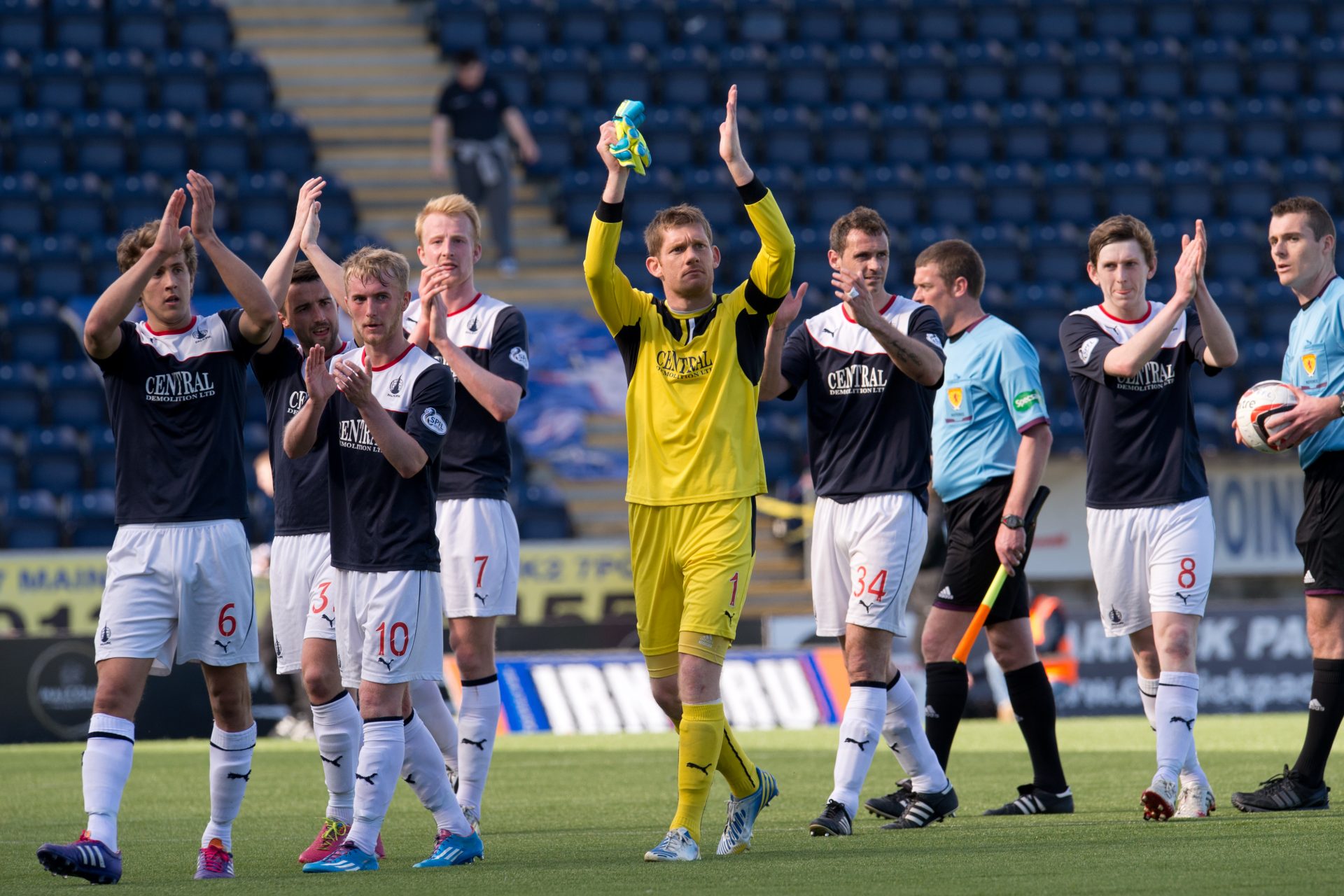 Michael has spent the last four years at Norwich, he reflected on some memorable years with the Canaries.

“The last few seasons I haven’t played as much as I would like, but to be a part of the team, especially last season when the squad won the Championship, and this season in the Premier League has been amazing to see how the game works at the top level.” 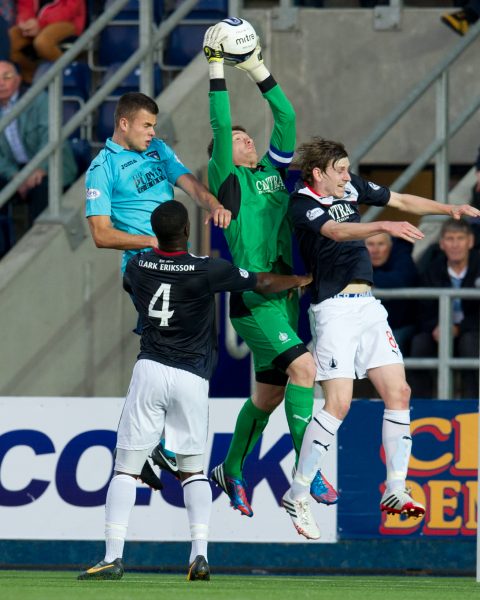 “Winning the Championship was a great achievement from everybody. I didn’t play much really, but I think I played my part around the team and I was involved in every squad that season, so it was good to be a part of it.”

“It was something special, we caught some momentum and just kept it going. It was so interesting to see how each game started developing as we got closer and closer to the end of the season.”

“Making my Premier League debut this year was a massive honour for me, I’ve played a couple of games now, and it’s something I’ve always wanted to do.”

A big part of the Northern Irishmen’s career has been his time on international duty, something that started about a decade ago.

“I made my debut in 2010, in Santiago against Chile. I didn’t really get in many squads for a while then I started getting back into squads from about 2012, when Michael O’Neil took over, then I was in pretty much every squad during Michael’s tenure.”

One of the things many football fans will know Michael for is his heroic performances with Northern Ireland during Euro 2016. The goalkeeper was key in his team’s incredibly resilient performances and received many plaudits for his efforts in holding the World Champions Germany to one goal.

“That was an amazing experience. It’s one that’s always talked about with me, and it was without a doubt the best event in my career, I think if you asked anybody in our squad, they’d probably say the same thing.”

“The Germany game is probably what I’ll be remembered for! It was amazing, it was a bit surreal even looking back on it now. Afterwards everybody was talking about me and stuff like that, which I haven’t really been used to in the past, and it was completely different to anything I’d ever experienced, both the game and the aftermath of the game. It was a really cool experience and one I’ll never forget.”

“The Northern Ireland fans really made a difference that tournament, I had a good feeling they would beforehand because I’d seen them in action. People from Northern Ireland are quite laid back and have a bit of craic, they came over to France on their holidays and to support their team. They really got behind us and had a great time away from the stadium as well. We were all very proud of them as players.” 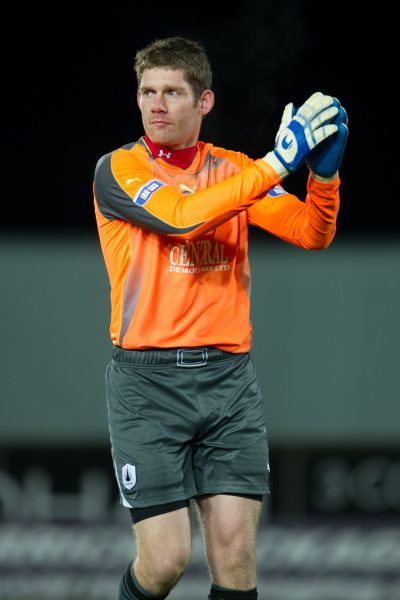 With a few years’ separation from that tournament, Michael looked back on how special that team was.

“That team just kept breaking records. In qualification we were in pot five of six and we finished top of the group, the first team ever to win from a pot five position. We were the first Northern Irish team ever to qualify for the European Championships, then to go on and get through the group stages, it’s fairy-tale stuff really. For the pool of players, we had to achieve so much was something a few years below that nobody would have believed.”

Many of Michael’s former Bairns teammates made their way down to England, he spoke on meeting those players he shares the Falkirk connection with, including Norwich teammate Tim Krul.

“I’ve come up against Murray Wallace a few times, Conor McGrandles was here at Norwich when I signed, I met Steven Kingsley a few times as well and Jay Fulton as well. They’ve all done really well that group, there’s a good few of those younger players that have gone on to have really good careers down in England”

“At the moment I’m teammates with Tim Krul at Norwich, and we sometimes do talk about our Falkirk days, it comes up in conversation. We talk about Jim Preston the goalkeeping coach, and other people that were there at the same time as both of us.”