Falkirk “celebrated” 100 years of their existence in season 1976/77 and it was a season to forget in a hurry.  The club was estimated to have been founded in 1877, and that date is confirmed from existing records held by the Scottish League. The club had a proud history and held a position of some importance in the history of the Scottish game. Two Scottish  Cup Final wins, in 1957 and in 1913,two runners-up places in the top- flight and several innovations ensured a place in the history books. The first club to score 100 goals in a season, the only Scottish club to have held the world transfer record and the first club to stage a floodlit match live on TV. Falkirk players had been selected for the national side at Full International levels and Alex Parker had earned 14 of his 15 caps as a proud Bairn. There was a lot to celebrate- but it was all in the past.

Season 1975/66 had seen the club finish in eighth place and the alarm bells were already ringing. Manager George Miller made sweeping changes to the squad he had inherited, and his list of free transfers included several first team regulars, notably Davie McCaig, Kirkie Lawson, Davie Whiteford, Tom McLeod, Jim Fowler, Stewart Wheatley and Jim McLaughlin. The manager’s signing policy seemed to be one of recruiting experienced players, many of whom had played at the highest level. Some might well have been past their best and some were risky signings. Tommy Traynor, Donald Ford and Ken Mackie were brought to the club, the latter for an alleged fee of £10,000, but the high-profile signing of a former Scottish Player of the Year scooped the lot. George Connelly was signed on a one-year deal. He had been a Celtic star, playing in 254 games and had been a member of the 1974 World Cup qualifying success.

Supporters were surprised to see a new royal blue strip being used in the official team picture. The League Cup campaign was a real surprise and Falkirk reached the quarterfinals before going out to Hearts. The second leg at Brockville was a real classic and Falkirk won 4-3 but went out 7-5 on aggregate. Incidentally, the Tynecastle side had a certain Jim Jefferies in their squad and he replaced Ralph Callachan who suffered a broken leg. It was the league form that was causing major concern for the Falkirk fans. September saw only one point collected and there was a thumping 6-1 home defeat by Dundee. The visitors side included ex-Bairns Bobby Ford, Bobby Robinson and Wilson Hoggan, and they must have wondered what had happened to their old side. One national paper said that Falkirk would be hard pressed to survive in the Miners’ Welfare League and on this display, it was a fair comment. For the home game against Arbroath on October 9th, the attendance barely touched 2,000 and the 4-1 defeat didn’t do much to boost that number for subsequent games. Falkirk were proving a soft touch and the goals dried up. The Connelly Experiment had been an unmitigated disaster and Donald Ford seemed to be less that 100% fit. One goal in five games, and defeats by Montrose and Arbroath led many to fear relegation- and it was only halfway through the season. Raith and East Fife were also struggling, but so were Falkirk.

Johnny Graham returned from Ayr United for a fee of £5,000 and made his second Falkirk debut in another home defeat- this time at the hands of fellow-strugglers Raith Rovers. The official attendance for the visit of Montrose was given as 1,500 but that might have been an estimate. The Gable Endies joined a growing list of clubs who had left Brockville with all the points. There were huge gaps on the terracing. “Falkirk Sinking Fast” was the headline in one report after a 4-0 defeat at Gayfield, and few would have disagreed with that opinion. Falkirk sank to the bottom of the league and then they suffered one of the most humiliating results in their recent history. 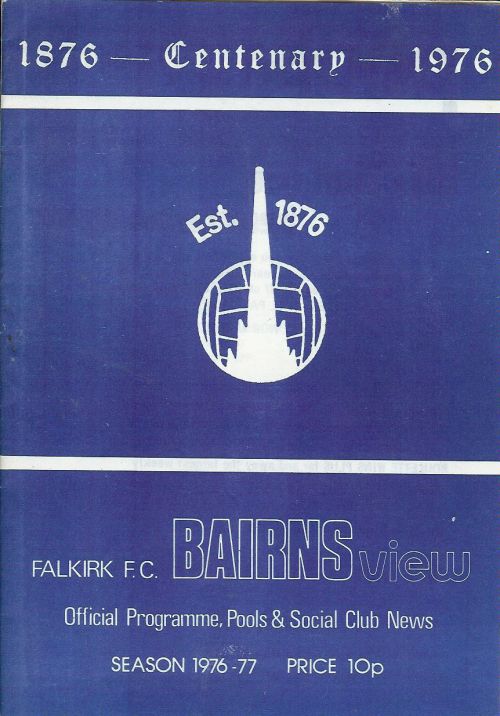 This would rank as one of the worst home defeats in Falkirk’s history, and there were huge gaps on the Brockville terraces as the slaughter ensued. The paltry attendance reflected Falkirk’s current form, and the fear that Dundee could inflict another heavy defeat after their performance earlier in the season. It didn’t look too bad at half-time when Dundee led 2-0, but the collapse and abject surrender after the loss of an early third goal was hard to take. Dundee were so much on top that they were lining up to take shots at Watson’s goal and there was little in the way of resistance from Falkirk’s so-called defence. Everything went right for the visitors and Falkirk looked a side heading for the drop. Having held League leaders St.Mirren on their own patch on the previous Saturday, it was a source of frustration and annoyance to see this hopeless display. The best Falkirk chance fell to John Perry in the opening five minutes, but he blasted wildly over with only Ally Donaldson to beat. Goals from ERIC SINCLAIR and BILLY PIRIE gave Dundee their interval lead, but Falkirk had at least made a game of it.

Two minutes into the second half saw Dundee score a killer third goal when ERIC SINCLAIR after good work from Johnston. That was the turning-point, and Falkirk offered little after that. The avalanche continued afterwards, and it was just a matter of how many the Dens Park would score.

54-minutes–  PIRIE scored with a flying header. 70 minutes- IAN PURDIE fired home off the keeper’s legs. 72 minutes- SINCLAIR scored the best goal of the game with a spectacular overhead kick from the edge of the box. Even the small band of Brockville die-hards applauded the effort. PIRIE added goals seven and eight and would not have had an easier task. If you were clutching at straws, one of his last two goals might have been offside- but by that time it didn’t matter. Falkirk fans were apathetic and there were surprisingly few boos at the end. The supporters had got used to this mediocrity and seemed to accept the fact that this team was going down without much of a fight. Dundee were good but were only third in the table. It wasn’t as though Falkirk were facing runaway league leaders. The team carried too many passengers- players who were not good enough .

With 16 games left, Falkirk were running out of time. Things looked bleak. It was turning out to be anything but  a season to remember.

Falkirk had celebrated their Centenary with a dinner in the Park Hotel. 150 invited guests enjoyed a night to remember and most Scottish clubs had presented gifts to the club to mark the occasion. Every club was represented except Aberdeen and Queen of the South and Falkirk were the tenth Scottish club to celebrate their centenary. As Chairman Hardie cheekily remarked- at least the club was in one top ten.

Falkirk’s 3-0 defeat at Starks Park was confirmation that the drop was getting closer with every passing game. George Miller paid the ultimate price for the failure, and it is tragic that some fans will remember him for his time as a manager- and not as an inspirational player and captain. Coach Billy Little took interim charge and the new manager would probably be a part-timer . Chairman Alex Hardie seemed to be in no rush to make an appointment but asked the fans to get behind the team for the remaining games. George Gibson left for Australia after the game against Morton, and he had been one of the most popular players ever to wear the colours.

The inevitable happened and Falkirk were duly relegated, finishing with a mere 20 points- seven behind Raith who were also relegated.  Manager Little didn’t have his sorrows to seek. Relegation to the third tier of Scottish Football. Dwindling crowds. Financial problems. Inadequate scouting system. Doubts over the continuance of a Reserve Team. It wasn’t going to be easy, and Dunfermline and Clyde were also in the bottom league, despite their proud histories and Scottish Cup records. The only way forward seemed to be with a youth policy and the recruitment of local youngsters. There was only one scout at the club and there were reports that Falkirk were £50,000 in the red. Manager Little had been in charge for eight games and he couldn’t have been blamed for the relegation.