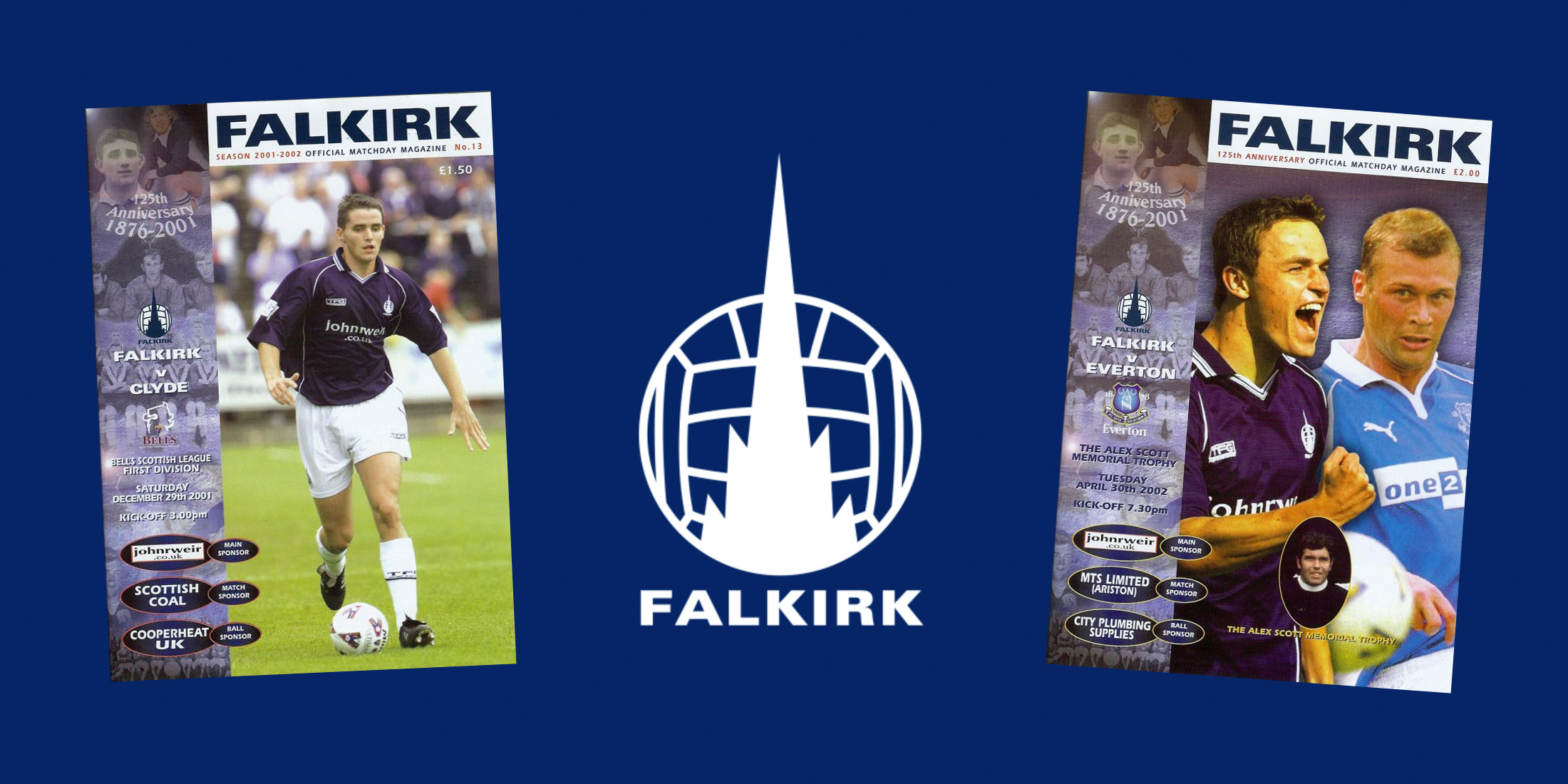 SAVED FROM THE DROP

Season 2001/02 must go down as one of the most bizarre seasons in Falkirk’s long and illustrious history. Never did “Expect the Unexpected” apply more, as one strange episode followed another. Falkirk ended up as a First Division side, despite being “relegated”. Players came in thick and fast-and left just as quickly. Fans were persuaded to part with their hard-earned cash to an initiative called “Team Builder”, organised by Brian Guthrie, as a series of loan players, fading stars, recovering casualties and foreign unknowns came and went. Alan Hansen once famously stated you win nothing with kids, and Alex. Totten showed that in his worst season at Falkirk. Starved of cash by the Board, he was left helpless as Falkirk slid deeper and deeper into the mire, and his desperate attempts to buy his way out of trouble through supporters’ cash often backfired. It was a season when it was hard to believe that this club had been at a Scottish Cup semi-final only a few years previously. The SPL looked a long, long way away. Crowds dwindled and many long-standing supporters found other ways of filling a Saturday afternoon. Many didn’t return for some time. Any notions that Falkirk were safe from relegation had been quickly dispelled at the start of February, when Ross County, second bottom of the League, came to Brockville and emerged 4-1 winners. Falkirk’s youngsters were out-fought, out-smarted and contributed to their own downfall in no small measure. Neale Cooper’s side were 3-0 up at half-time and the Brockville punters were far from happy. Lee Willkie’s header five minutes from time was scant consolation for the few remaining on the terraces. Falkirk were woeful and manager Alex. Totten ripped into his men at the finish. “The fans were cheated” claimed an upset manager. Few would have disagreed. 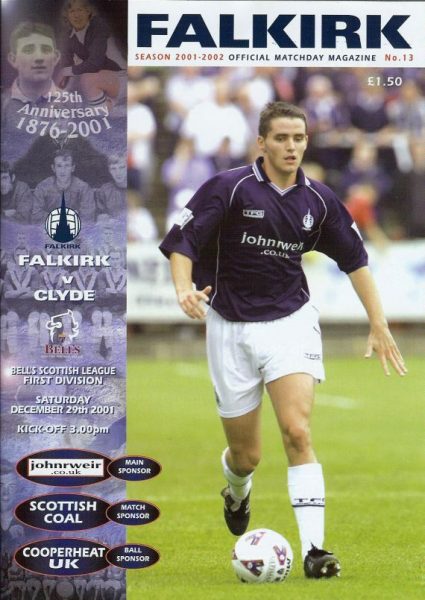 On Tuesday March 5th.2002, Falkirk fans were taken to a new low and many feared for the future of their club. Crowds were down. Gate receipts were down. Income was reduced. Cutbacks saw budgets pruned to the minimum. There was a lack of investment in the team. There was an over-reliance on youngsters. Panic- buying of players, mainly supported by fans money, led to frustration. The lack of progress on the new stadium development was the one that was losing players- and questioning the future. It wasn’t easy to be a Bairn that season, but for many the biggest test of their resolve came that night. Clyde were at Brockville three days after Falkirk had beaten them 3-2 at Broadwood.

The rain was pouring down and many huddled for shelter under the covered enclosure. A mere 1,817 hardy souls turned out to see the game.

Clyde annihilated Falkirk 6-1 and many drifted away long before full time. It was 6 going on 10,12,any number you like. Falkirk were outclassed and fans had to stand and watch their team being taken apart by an average team. It was hard to bear. Leigh Hinds and Brian Carrigan hit hat-tricks as Falkirk surrendered without a fight. Falkirk offered nothing.

The few souls left on the Hope Street terraces, soaked to the skin, damp, miserable and desolate were watching a club in freefall. It was the biggest test of resolve for many older fans. This was terrible to watch. The manager charted the decline from the end of the previous season, when so many experienced players were released. Only one came in- Steve Watson- and that for only three months. He had sensed that the season was going to be difficult and knew that tough times lay ahead. The combination of inexperience and inconsistency was a dangerous one and the young players lacked nothing in effort, but everything in the knowledge in fighting a relegation battle.

Darren Hill made his first team debut in place of Myles Hogarth for the crunch encounter against Raith at Brockville. The youngster denied Novo early on and went on to have a fine match. Two goals from Lee Miller sealed the win and the collection of three vital points. Raith were now five points behind Falkirk having played a game more, but many felt the real battle was to avoid bottom place. There were all sorts of rumours about what might happen at the end of the season, and Falkirk needed to make their position safe.

Airdrie were the opponents at Brockville on Saturday March 23rd and there were stories in the press that they were in dire financial straits with some Diamonds fans fearing their club could go out of business. Airdrie turned up at Falkirk with only 14 players and many feared the rumours could have some foundation. The 2-2 draw didn’t really help either side.

Falkirk fans now realised the depth of their problems when Arbroath came to Brockville and won 3-1. Tano started the game but even the introduction of Moss, Brown and the other Team Builder purchases couldn’t save the club. This result all but relegated Falkirk, and it was a sad day for every Falkirk fan. Moss was sent off for raising his hands to Cusick and Arbroath’s McGlashan was ordered off for an off-the-ball incident. Lee Miller scored his 10th goal of the season to give Falkirk the lead, but the Arbroath side looked more determined.

The bottom of the League saw Falkirk on 36 points, four behind St.Mirren whose season had exploded into disaster after disaster. One-time relegation candidates Ross County were now unbelievably in third place, illustrating just how vital a run of good results was. Falkirk had four games left to play, three of them away from home.

The fans were not at all happy, and the Directors came in for some of the treatment meted out to the likes of previous Chairmen Fulston and Deans.

Defeat at Dingwall only confirmed what many had known some time ago. The game was well and truly up. Ross County won 4-2 and frustration rose to new levels. It was rumoured that Alex.Totten was heading for the exit door and had been asked to resign by the Board. He had never experienced relegation in his 22 years in football management and was being linked with a possible move to Palmerston.

A goal-less draw at Somerset confirmed at last that Falkirk would be relegated. Only the demise of Airdrie could save them from the drop. 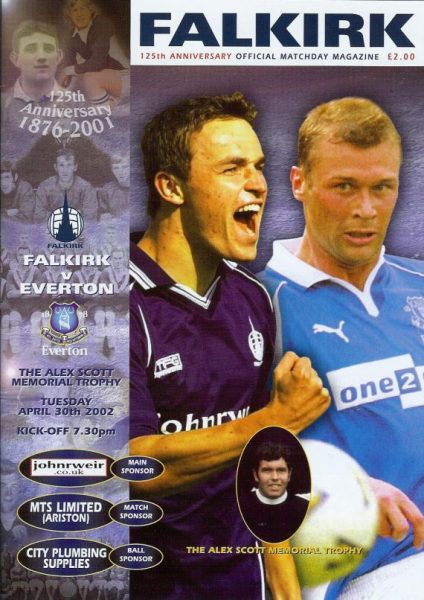 The rumours coming out of Airdrie suggested that the old club was in serious danger of closing. The facts spoke for themselves. Falkirk had the worst defence in the league, having shipped 73 goals in 34 games. They were second bottom of the League. In any other season, they would have dropped to Division Two.

Four years previously, Falkirk had taken over 10,000 fans to a Scottish Cup Final at Ibrox. The club was now drained of hope for the future. Supporters had paid over £25,000 to pay wages, attract players and strengthen the team. They had had enough. It was all one- way traffic, and many believed that a Supporters Trust was one way forward. The club’s supporters wanted to have shares in return for their investment and the events at Morton had acted as an inspiration.

It was all over now. The night when Clyde won 6-1 was the warning, but by then it was too late. Two more goal-less draws saw season 2001/02 stutter to an end. Ironically, Falkirk shored up their defence when it was too late. It was vital to avoid bottom spot, and Raith’s defeat at Firhill was the best news for a long while. Falkirk finished second bottom- seven points from safety.  They were relegated to Division Two- or so we all thought.

There were rumours that Falkirk would be a part-time club for season 2002/03, as the curtain finally came down at Love Street on Saturday April 27th. Both sides had seasons to forget, and for Alex.Totten it was his last game as manager. He had been appointed as Director of Football, leaving the way open to appoint a new Head Coach. The front runners were rumoured to be Ian McCall of Airdrie and Brian Fairley of Stenhousemuir as well as Kevin McAllister.

The last game was at Brockville in a game against Everton for the Alex.Scott Memorial Trophy.

Then came the news that broke Airdrieonians supporters’ hearts and gave Falkirk their stay of execution. Airdrie had amazingly finished as runners-up to champions Partick Thistle, despite all their financial problems. The irony was not lost on older fans. So often denied promotion by those running the leagues, Falkirk were maybe- just maybe- about to be thrown a lifeline by these same league administrators. Airdrie F.C. went out of business after a fruitless two-year search for new owners. They had run up debts of almost £3m and the 124 year- old club was being wound up. Stenhousemuir were also spared relegation as a knock-on effect of the Airdrie situation.