I wonder how many Falkirk fans go into Morrison’s supermarket and try to work out which parts of the store corresponded to parts of the old ground? Where was the main stand, the enclosure, the shed, the wee bridge, or their place on the terraces? Brockville was full of memories, not just of games, scores, players and incidents, but also of friends, relatives and other things linked to the experiences of being at the old ground. It takes you back and can often act as a memorial to people no longer with us. 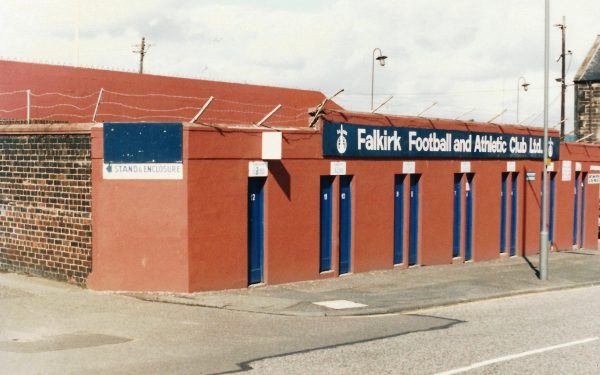 My own experiences go back to the early 1950s and fond recollections of a wee boy going to the game with his grandfather. The Saturday ritual started at his house with a meal before heading off to Grangemouth railway station to catch a steam train to Grahamston. From there, it was a walk up to Melville Street to visit an elderly aunt who lived in the tenements opposite what is now Behind the Wall. After what seemed to be an eternity, we made our way to Brockville. There were street traders selling papers,badges and souvenirs on the railway bridge, but soon the smell of liniment wafted round from the back of the stand as we approached the main entrance. A smartly- dressed commissionaire opened the door for my grandfather who was a well-known season-ticket holder, and we went up to the area under the stand where there were smartly dressed ladies serving Bovril and pies. There were no paper cups in those days, and the cups were made of bone china. Spoons were in short supply and the same spoon could have been used by lots of people, as evidenced by the congealed brown deposits on the spoons themselves. The pies were delicious, though you sometimes had to watch that the grease didn’t run down your sleeve.

We were always in our seat before the game started and the pre-match entertainment consisted of a record- always the same one. “The Happy Wanderer” by the Obernkirchen  Children’s’ Choir. It had won a big competition at the time and I can still remember the lyrics.

“I love to go a-wandering

Along the mountain track

And as I go, I love to sing

My Knapsack on my back” 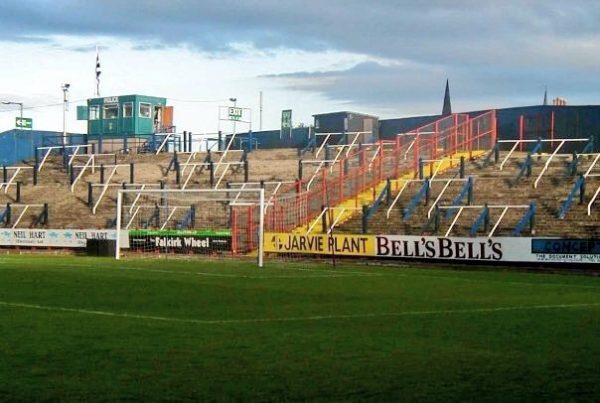 The catchy chorus was copied by some members on the terraces, but I can’t remember anyone in the centre stand joining in. Some of the doyens in the stand brought travel rugs with them on colder days, and I seem to remember more than a few ministers and priests in the row in front of us. I didn’t have a seat myself, but my grandfather seemed able to find a space somewhere for me. Maybe he read the Falkirk Herald and knew which gentlemen of the cloth might be having funerals or weddings to cover. At worst, I sat on his knee.

In those early days, I couldn’t understand why Falkirk were called The Bairns, when so many of them were (to me at least) old men. Jimmy Delaney and Johnny Kelly were bald. It is hard to pinpoint the exact first game I was at, but it must have been sometime around the autumn of 1952. My grandfather’s main hero of the time was Angus Plumb and his style of play was described to me as that of a “rumble-‘em-up” centre forward. Scores and goals didn’t really register until later, but I remember an injury to Pete Ralston who had blood pouring from a head wound. Ernie Godfrey’s towel quickly turned crimson, as the player was led to the dressing-room. As I grew older, I took more of an interest in the mechanics of the game- the goals, the stars and the scores. I was aware that we had a lot of good young players and I liked the young keeper Bert Slater and the wingers Sammy Taylor and Willie Sinclair.

One game stands out above all others and not really for a football reason. I had never seen my grandfather laugh so much as did all the old guys in the centre stand. It was a Ne’erday game and everyone had their own hip flask to celebrate the first Falkirk goal of the new year. The entertainment was a pipe band, and it might have been the Camelon Pipe Band, and they started their marching routine. It became quickly apparent that the bass drum player was maybe as someone said “well-refreshed” from his Hogmanay consumption. They marched toward the Watson Street terrace and he was obviously struggling to keep up with his colleagues. As they turned and started towards the Hope Street End, he stopped and looked to be lost. A colleague quickly spotted the danger and ran down to turn him round and try to re-join the others. By now, the tears of laughter were streaming down faces and the zig-zag pattern of the drummer’s route grew more and more erratic. Again, he missed the turn and he slumped over his drum. This time- the order was given to leave him and one of the band followers went round to bring him back to the safety of the stand. I can still see this incident and it was absolutely hilarious. 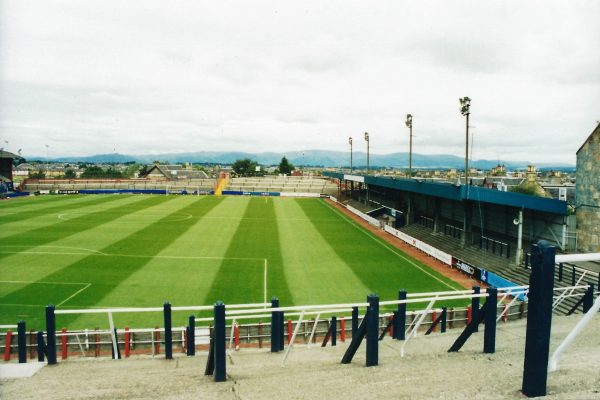 The half-time entertainment was invariably a brass band, or a pipe band and the followers went round behind the band catching coins thrown from the crowd and caught in a bed blanket stretched out for the purpose. Needless to say, there was no shortage of waifs and strays following the followers and collecting the wayward pennies and threepenny bits. There was no such thing as Health and Safety in those days, and it is hard to imagine the danger of throwing coins from such a distance into such a tight target.

My grandfather  wouldn’t take me to Old Firm games until I was older, but regardless of the opposition, he always wanted to “get away before the rush”. We missed a few classic late comebacks and it took me a long time to work out that the same boys on the return Grangemouth train had been able to stay until the final whistle. One classic was when he insisted we leave when Falkirk were 3-1 down to East Fife. By the time we got home, my grandmother told us that Falkirk had won 4-3.

As my grandfather grew older and couldn’t attend games, I started to go on my own with other schoolmates, some of whom I still see at games today. We stood on the terraces and could change ends at half-time, by crossing the wee bridge. One other aspect of the game in those pre-Health and Safety days was the provision of Bovril to those on the terraces. A guy in a white overall would come round with a canister of boiling water strapped to his back and add this to powdered Bovril in a cup. Imagine that risk?

Finally, we had the excitement of the half-time scoreboard. If you bought a programme, you knew the key to the games. For example, A- Aberdeen v St.Mirren, and so on. The excitement as the guy pushed the wooden squares into place was tangible. Everyone wanted to know which game was which as there was no live radio and no mobile phones. The announcer didn’t see fit to enlighten the crowd. Different times.

Were they better times? You could make a case for both sides. It was good to see Falkirk in the top- flight, with players selected for representative games and a league and cup competition that any team could win. There were no sponsors names splattered all over the place and football people ran the game. Falkirk were a leading club and produced some great players, many of whom went on to represent their country. There were some great characters at the club and some fantastic memories. Maybe it’s rose-coloured spectacles, but these days in the 50s were brilliant. The end of the era, with relegation in 1959, was a real watershed time. But that’s a story for another time.