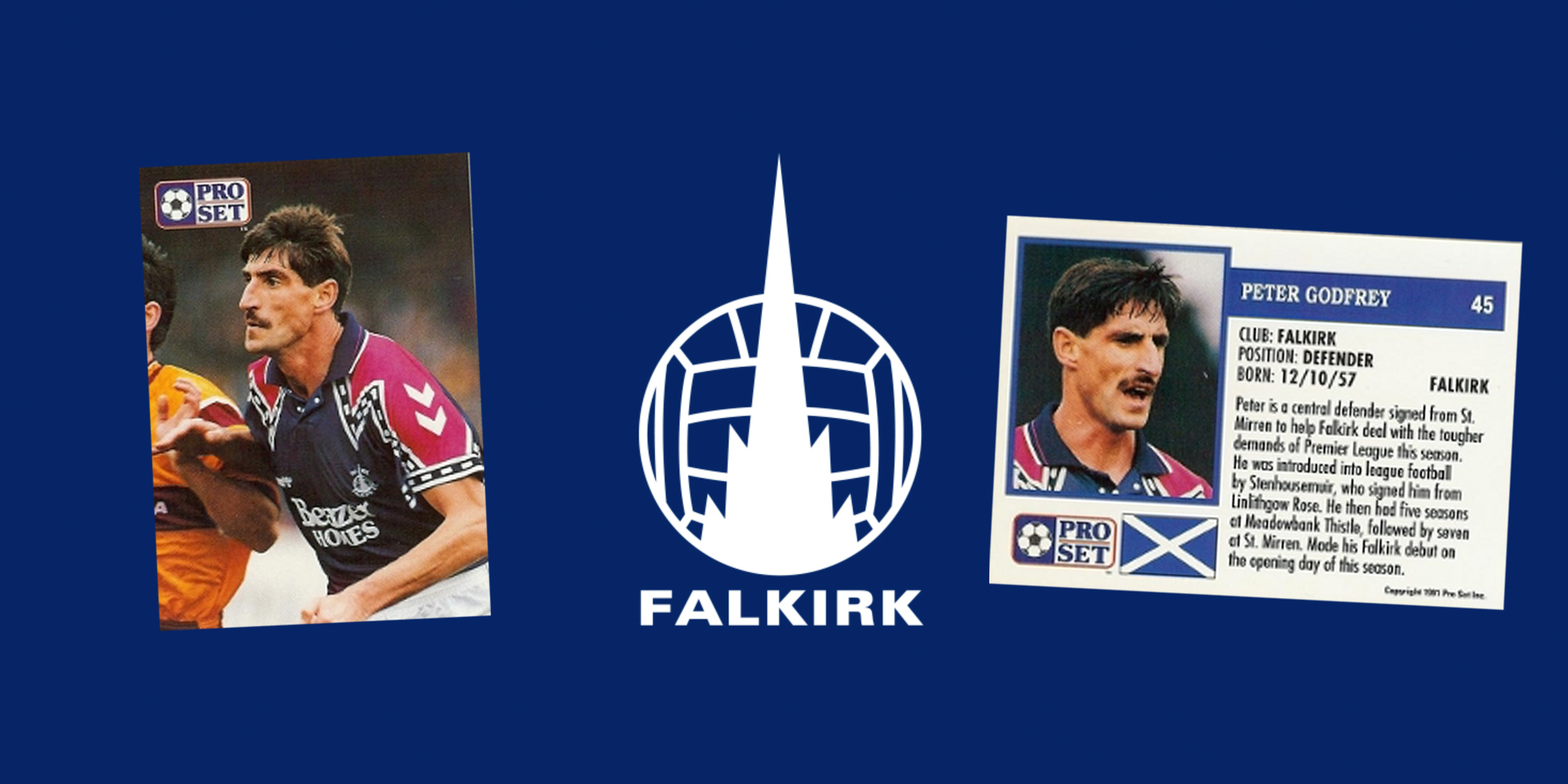 We spoke to Falkirk native and former Bairn Peter Godfrey on the years he spent with The Bairns after joining Jim Jeffries side in the victorious 1990/91 season.

Peter returned to his hometown team as a seasoned professional following a successful seven-year spell at St Mirren, where he established himself as a Buddies legend.

“I was at St Mirren for about seven years. Midway through the season they got an interim manager in, Gordon Smith. He came up to me about December time and said look, you’re not in my plans, but Falkirk are interested in you if you want to go there. Being a local boy, it wasn’t a problem for me!”

“I knew Jim Jeffries through football, and he was the one that interviewed me. I was negotiating for a medal, not the money! We eventually agreed I’d get a league winners medal if we won the league. It was a great team, but at the time all I was thinking about was winning the league for my local club, because they were so close.”

“There was no way I was going to stay at St Mirren not wanted and sitting on the bench and not get a game, especially when your local club’s wanting you and they’re going for promotion. I jumped at the chance and eleven games later we’d won the league!”

While most players would be looking for a raise to their weekly wage or a generous signing on fee, the veteran defender was more interested in silverware after the disappointment of not being involved in St Mirren’s 1987 Scottish Cup final triumph.

“Unfortunately, I wasn’t playing when we won the cup at St Mirren. I’d picked up a knock and had an illness, so I was in bed for two weeks. I missed the semi-final and then he just played the same team, so I missed the final as well. It was happy days but it’s not the same as playing, you want to play and win.”

“I was up in the stand and a wee bit grumpy, because I played 40 league games out of 46 that year and I didn’t even get a medal! That’s why I was arguing for a medal instead of money when I came to Falkirk.” 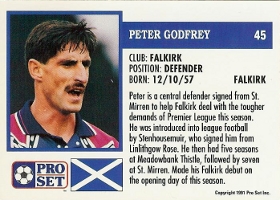 Some doubted the wisdom of signing a player of his vintage, but Peter soon proved the doubters wrong as Falkirk stormed to a first-place finish and with it promotion to the top tier.

“After I arrived, we were undefeated for my eleven games and won the league, so it was a great start for me. When I joined Falkirk I was 34, and a couple of the older boys were wondering what they’d signed that old man Godfrey for, but when we won the league a couple of them came up and said they wanted to buy me a pint because they didn’t think I’d do a job, but I’d proved them wrong!”

The tight pitch and intense crowd of Brockville was memorable for many players, and Peter, who also played for Stenhousemuir and Linlithgow Rose in the local area, found it no different.

“Brockville was a great atmosphere. The fans were so close I’d sometimes have a coupon on and the boys from the crowd would shout down ‘your coupon’s down Godfrey, you’re rubbish’, it was just good banter!”

“You’re so close, you could see everybody, you could almost feel everybody! You could sense the tension from the crowd if you weren’t winning, on the pitch you always played for the jersey and tried to win the game so you could send the supporters home happy.”

After joining The Bairns Peter found himself involve in a title race that could go any way, and every one of his eleven games mattered.

“They were all on a knife edge, you had to win. It was a three-way tie for the league with us, Dundee and Airdrie. We played Dundee at home and we drew nothing each, which I think was a good result because they were the better team on the day. The next again week we had to go to Airdrie, and it was electric. I remember from that game half the stadium was their supporters and the other half was ours. We won 3-0, brilliant!”

“I played for Meadowbank in my younger days before I moved to St Mirren. Who was it we had to play on the last day of the season? Meadowbank! I went up to Terry Christie in the centre circle before the game and asked him not to take a trophy off of me, but he just said that his teams always tried, which was what I was feart of! We managed to beat them 4-2 and that was happy days.” 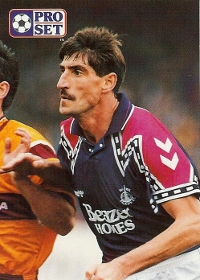 I’d was just relief when the final whistle went, I ran straight up into the stand to see my mother and father, plus I had ten of the family up in the stand watching the game. After the game we had a few drinks in house then we went out about half nine, and I can’t remember much past then!”

“I remember going up to the pubs after the game. The place was jammed, and my brother and all my pals were way up the far side. I got carried in, right up in the rafters, and to my brother. My medal came out and went right round the crowd, but it was still in my pocket when I woke up the next day, which is maybe a bit surprising because anyone could have taken it!”

The step up to the top level was a welcome challenge for an ambitious Falkirk side and the following season was one full of great memories.

“The Premier League was superb. I played in the Premier League for seven years with St Mirren, we never got relegated when I was with them, but it is a bigger step because you’ve been playing in the First Division and then you get up. We had experienced players and we weren’t scared of anybody.”

“One of the games I remember that season I was actually injured and sitting on the bench. We went up to Perth to play St Johnstone, that was the day Simon Stainrod scored from the halfway line. After he scored Lindsay Hamilton, the goalie, was trying to goad him into trying again! When Simon scored, I remember hitting my head off the dugout, you just couldn’t believe he’d try that.”

“Simon was a crowd puller, he could really play and strut his stuff, then you had wee Sammy in and about him, or Crawford Baptie if he was playing, you had players there that knew what they were doing with each other and scoring goals wasn’t a problem for any of them. We had another local boy when wee Crunchie came, wee Kevin McAllister. The two of us were from Grangemouth so we travelled together, so that was ideal for both of us.”

The Grangemouth man’s favourite memory in the navy blue came as he scored an unbelievable goal in a 1-1 draw with Rangers.

“I remember I scored at Ibrox in 45 seconds! It must have been a free kick, and they took it too quickly, because I was still running up to get into the box when it came in. The ball came out to me about 30 yards out and I hit it right into Andy Goram’s left hand corner. He was like superman, but he was never getting to it, it was some hit! That’s my claim to fame, scoring at Ibrox in 45 seconds!”

“My mum and dad were a wee bit late getting in, so they were just coming in as it happened and when they asked got told their son had just scored!”

“My son and I, quite a few years later went to a Linlithgow game. We went for a pint afterwards and the barman asked if I knew Andy Goram, to which I said of course I scored into him after 45 seconds. He didn’t believe me and asked if we wanted to go and meet him, and my son was really keen. My son asked Andy if he remembered my goal and he said, ‘Indeed I do son, I had twenty pound on him at 50/1 to score the first goal!”

Another famous result that Peter found himself involved in was the legendary four goal demolition of arch-rivals Dunfermline, affectionately known as Super Tuesday Two, a rivalry Peter wasn’t aware of till that game!

“I didn’t really know the rivalry between Falkirk and Dunfermline till one specific game. It was what they called ‘Super Tuesday Two’; Dunfermline nil, Falkirk four. When I was walking of the pitch a boy jumped on my back and said, ‘Brilliant big man you’ve done us a favour, we hate the Fife!’. I got told about the first Super Tuesday and everything as I was walking off, but he said that was even better! Beating your local enemy 4-0, plus I scored that night, and so did wee Crunchie, two local boys, it was superb!”