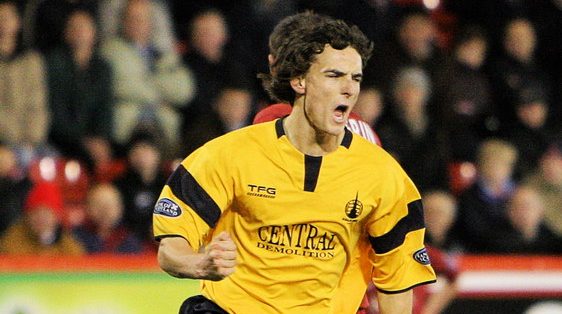 When you look back to when Falkirk were last promoted to the Scottish Premiership in 2005, it was the start of four memorable seasons in the top flight for Falkirk, and arguably some of the best times for the club in recent memory. Falkirk were where they belonged, at the top of Scottish football, and had a team of players who are still held in such high regard today. Back then, the squad boasted fan favourites like Pedro Moutinho, Anthony Stokes and Darryl Duffy, to name a few.

One of Falkirk’s driving forces in midfield for the two seasons after their promotion talked to us about his memories of being a part of that special team.

When Alan Gow came to the end of his time at Airdrie, he had several offers from Premiership clubs, who were competing for his services. One of those teams was Falkirk, and he takes us through how he made the decision to come to the Falkirk Stadium:

“I had a few different options in the premier league. I was at Airdrie at the time, in the Championship, so I thought it was probably the next step for me, I had to go to a Premier League club to prove myself.

“I’d played against Falkirk, they had won the league by a lot of points that year and they deserved to go up. They had a good footballing side so I thought it probably suited me to play for them and I actually knew Brian Rice, he was the assistant at Airdrie before he went to Falkirk.

“I went to meet Dundee United, then I met with Falkirk and I decided to go to Falkirk. It was Chipper that convinced me, because I’d already worked under him and the style of football suited me. I was still staying at home in Clydebank too so I didn’t have to move away from home. I was happy to go to Falkirk, they had a new stadium too, I really enjoyed it.” 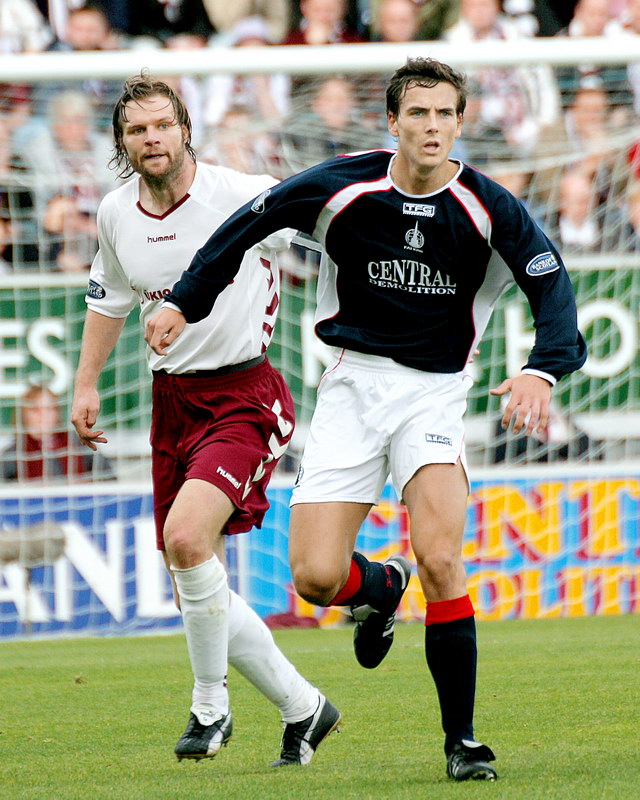 No matter how many other cubs former Falkirk players have been with, they always say the same thing: how close they felt with the fans, how amazing the Falkirk fans are and how tight knit the dressing room was. Alan is no different and fondly recalled his connection with the Falkirk faithful and how well the team gelled:

“I always had a good rapport with the fans, I think they appreciated the football we played at that time. No disrespect to the other clubs I’ve been at but that Falkirk side I was in, when we first went up to the Premier League, played really good football, there were so many players that clicked in the same way. Yogi and Chipper had a style of play that was good to watch. When we did get beat, we were beaten physically, we never got embarrassed then because other than Rangers or Celtic we were probably the best team in the league technically. Every time we went to play Rangers or Celtic they gave you time to play and we played possession based football. I think the fans appreciated that and you appreciate playing football yourself when the fans are enjoying it and cheering you on. I had a great time with the fans there.”

“Sometimes you just go somewhere and click with people and that happened when I first came to Falkirk. I played upfront with Darryl or off Darryl and when he was sold to Hull they changed their shape. I’ll always remember going to Holland and playing Groningen and we played a similar way to how they played. Me and Pedro kind of became these wide men, we were all on the same page as each other and I think, the other players from that time would tell you, Pedro Moutinho and these players were very underrated players. I played at top clubs in England and Pedro Moutinho was a top, top player.” 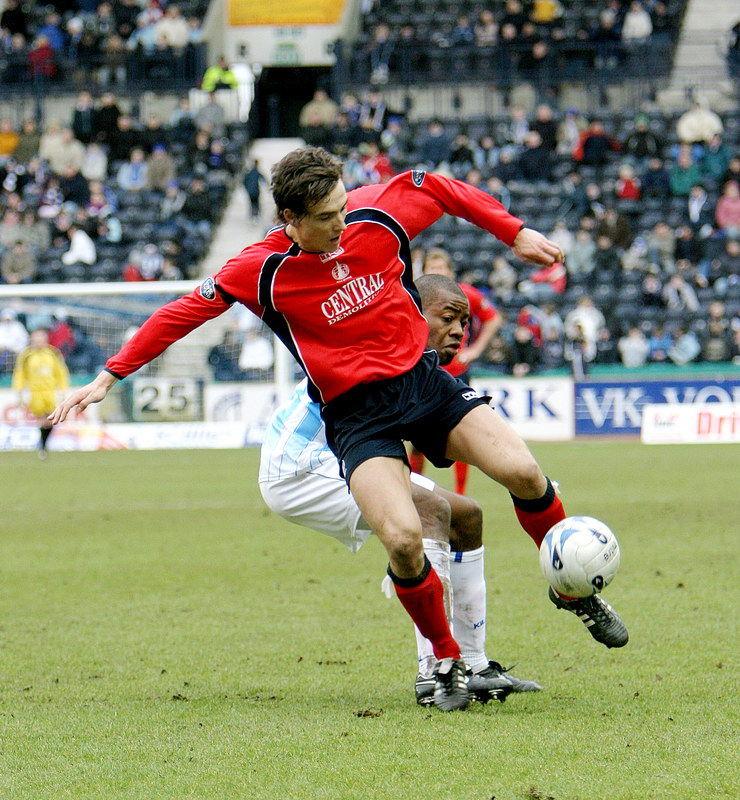 Everything suited Alan at Falkirk, including the players around him and has nothing but great memories of playing in big games with his teammates around him:

“We had a very good, balanced side, particularly in midfield, we had a lot of good midfielders. We were competing at the highest level. Sometimes we would go and lose to Motherwell or Kilmarnock, but when we played the big teams it suited us better because they were teams that maybe gave you that respect and let you have the ball and we murdered some teams for it.

“We went to Celtic Park and we held our own every time. Celtic struggled against us and they were the best team in the league at the time. My first goal for Falkirk was scored at Parkhead in the cup, great memories.

“I think the first year at Falkirk I was second for assists in the SPL behind Nakamura. The club suited me because I want that main target man. Me, Russell, Pedro, then Darryl came in and all those players complemented each other which worked out quite well.”

“It was a good side, it had a good mix. It had experienced boys, guys that were 25, 26, in their prime and then we had the young boys like Stokesy who was on loan from Arsenal.” 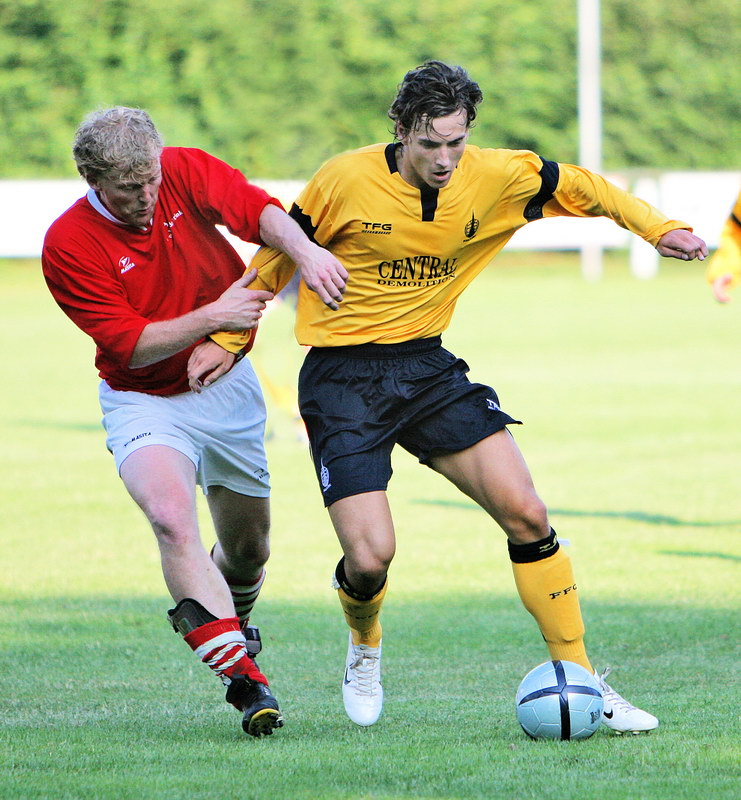 Of all the players Alan played with during his time at Falkirk, Anthony Stokes’ ability stood out the most. The goalscoring ability that Stokes possessed at such a young age was nothing like Alan ever saw at any other club he played with:

“Stokesy, as everybody knows, was a phenomenon. You don’t get another kid at 17 that scores goals at that level, he was unbelievable. I’ve played around a lot of clubs and I’ve never seen a goalscoring striker as good as that at such a young age.”

“When he moved on in January everybody was a wee bit worried, but the onus fell more onto me and Russell, and Pedro as well but it worked out and I think I scored eight or ten that year. I think the first game back we played Dundee United and I got a hat-trick at Tannadice and that was the first game I played up front. I’d never been a centre forward, I was more of a creator but I was happy with the way things went at Falkirk.” 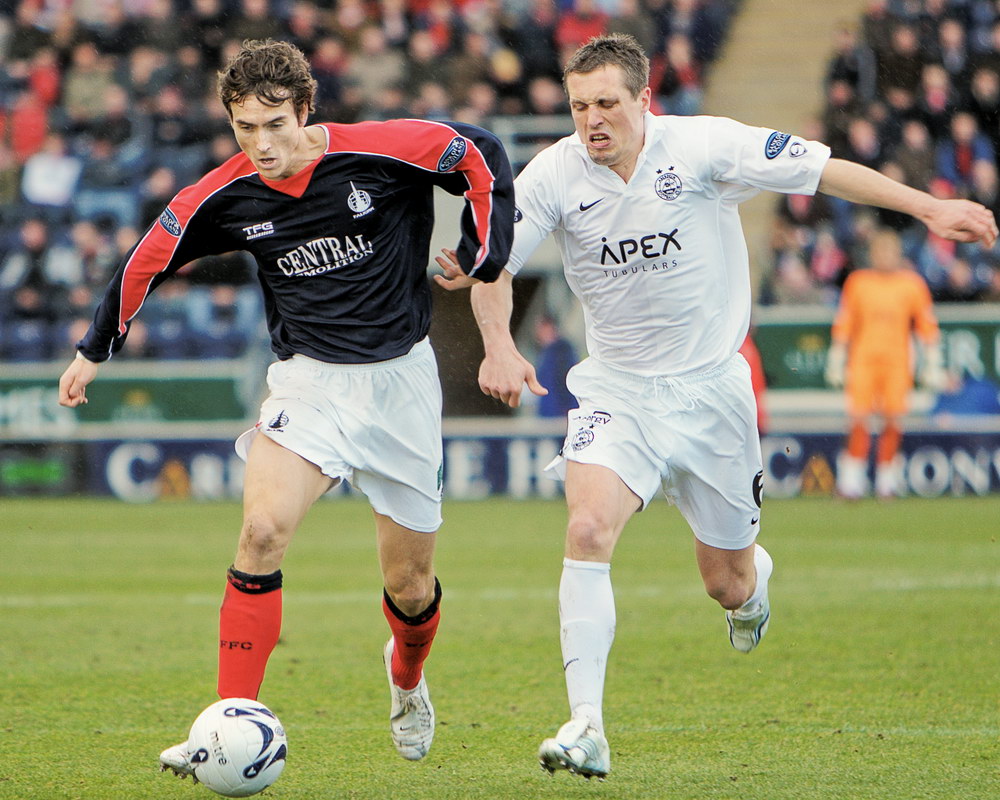 Talking about Anthony Stokes and his finishing ability brought us to the topic of Falkirk’s rivalry with Dunfermline, a fixture in which Stokes had bagged a hat-trick in at East End Park earlier that season. Alan remembered beating Dunfermline four times in the league that season and fondly recalled his impressive performances against them, from setting up all of Stokes’ three goals against them, to scoring the final goal in the last game of the season and his last ever game in navy blue:

“I knew it was a big derby and I don’t think we got beaten by Dunfermline that season. I scored the winner in the last minute when we played them at home, and then I made all three of the goals when Stokesy hit a hat-trick against them, then I scored the last goal against them in the last game of the season, it was my last game for Falkirk.

“I felt a bit bad so it was probably a wee bit emotional going into the Dunfermline game. It was my last game for Falkirk and it was the last game of the season. I think we finished seventh that year. But I think I showed I was playing for the jersey in the end because that was probably one of my best performances of the season, and then I scored that goal at the end, I was delighted with it.” 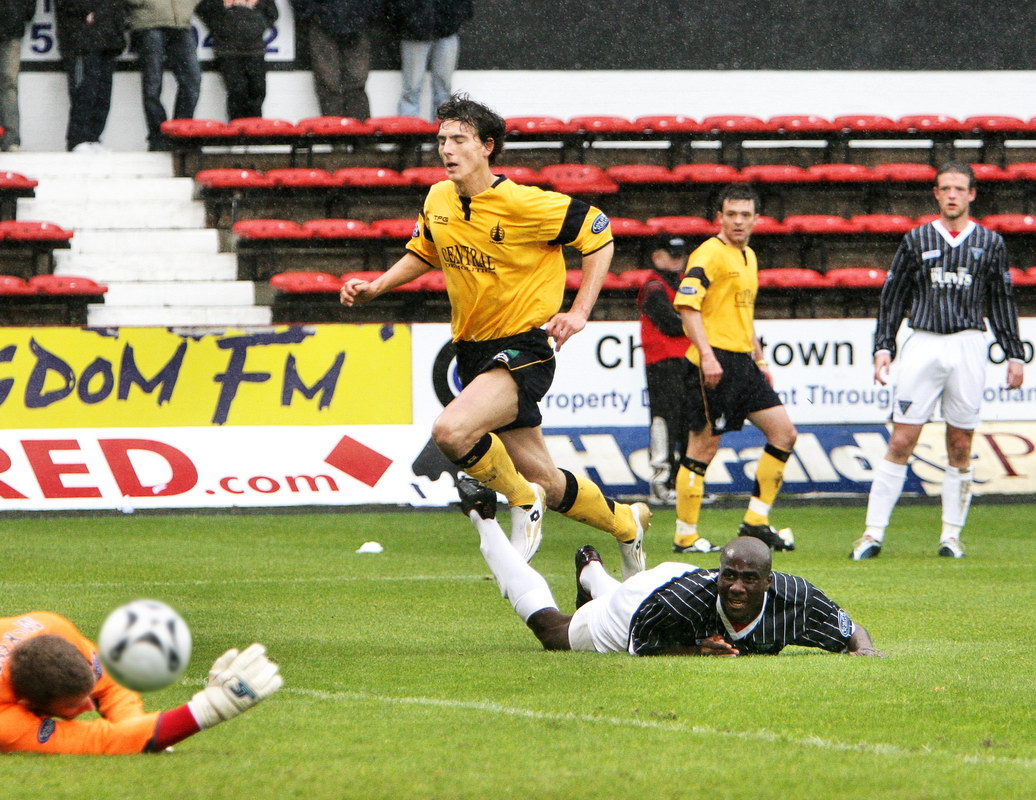 Even though Alan left for Rangers  after that season he still considers himself a Falkirk fan, and remembers Falkirk not just for the fans, teammates, and good times, but for the lifelong friends he made there as well:

“Even when I moved to Rangers I was still a Falkirk fan and all my pals were still playing there. Darren Barr is probably my best mate in football and I still see him to this day, all the time. I made friends there that will be friends for life.

“I don’t remember having many bad times at Falkirk, it was great, I loved it.”