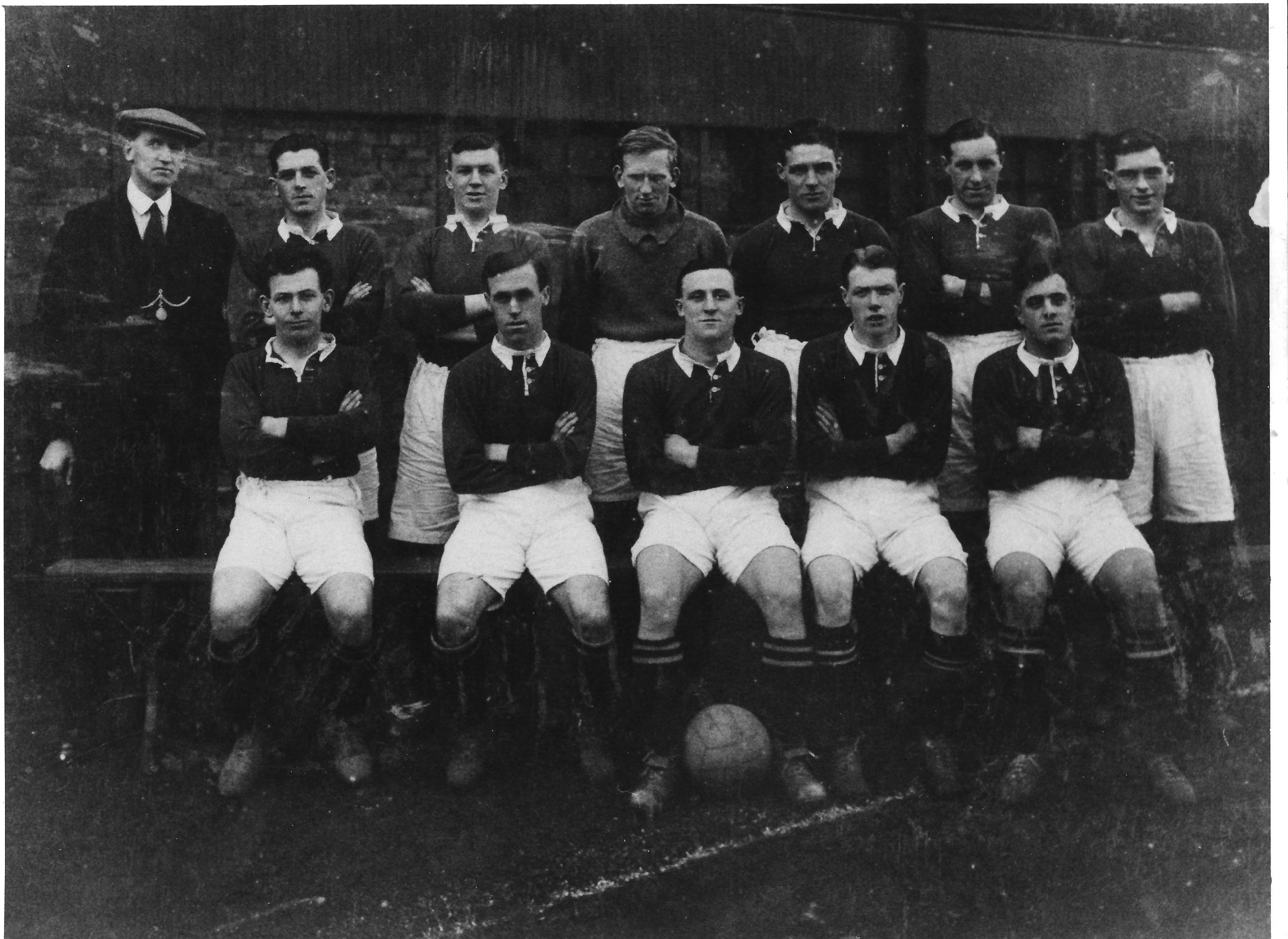 Sooner or later there will be pressure for  a big fund-raiser for the NHS staff who have performed such heroics during the current coronavirus pandemic. Footballers have already contributed significant sums and individual clubs have done a lot to help with community support. The role of football clubs in aiding charity events is well documented, and Falkirk have in the past raised funds for local efforts. The fundraising for the (then) new Falkirk Infirmary was aided by the money raised by a game at Brockville between Falkirk Former Players and the Police. But the biggest efforts came about in 1923 to raise money for the Redding Pit Disaster Relief Fund.

In those days, mining accidents were regrettably all too common, and in the calendar year 1923 alone, there were at least 215 recorded deaths in pits in Scotland. The Stirlingshire coalfield was one of several big Scottish coalfields and the mines were in private ownership until the creation of the National Coal Board in 1946. Explosions and floodings were not uncommon and in those pre-NCB days there had been major disasters at Blantyre 215, Udston 73, Mauricewood 63 and Nitshill 61. In the Stirlingshire coalfield there had been fatalities at Quarter Colliery Stirling and East Plean, but the worst disaster occurred at Redding on the morning of September 25th 1923.

There was no national system for dealing with such tragedies, no Health and Safety, no industrial compensation legislation and no state insurance provision. Add in poor communication systems, inadequate medical provision and an almost feudal relationship between management and workers and you have a recipe for what occurred- an absolute disaster. There are copious accounts of the disaster itself, including the official investigation documents, but the human elements are best captured in some of the original documents. Thomas Aitken, a fireman, wrote this note for the colliery under-manager –

The water has broken into Dublin No.1 and is knee-deep on the slope and there is more going to Barr Run haulage road than the pumps are able to manage. You might come ben and see it and I will be at No.3 Bench. If not there I will be in Dublin.

P.S. –There is very great danger of flooding out Bar Run haulage.

I have sent word to J.Jarvie.”

His words were only too prophetic. Some of the notes scratched on available surfaces by the trapped men make for harrowing reading. They survived as long as they could, some by eating coal, and they knew they were going to die.

The story of the Redding Pit disaster should be made compulsory reading for everyone. In the final count, 40 were killed and there had been 66 men trapped underground at one point. The last body, the 40th, was recovered on the 40th day of the rescue. In an act of what now seems amazing insensitivity, Pit 23 started up again on January 24th  1924. The whole area was rocked by the tragic events and the Provost of Falkirk and The Falkirk Herald, set up Relief Funds. The money came in from all over Scotland and Falkirk Football Club was keen to do its share of fund-raising. Some of the gate receipts were given to the Fund and away fans were keen to play their part. Collection tins were well in evidence and at one game, Leith Athletic fans willingly contributed £15- which was a considerable sum in those days. The Stirlingshire F.A. agreed to stage a local variation of the Stirlingshire Cup and the ultimate prize was to be a gold watch, donated by Henderson’s the jewellers, to all the winning team. In the end, there was some confusion over the tournament format and rules. Falkirk were drawn away to Kings Park in Stirling and a goal from Syd Puddefoot earned a narrow 1-0 win. Over £60 was raised for the fund and there is some mystery surrounding the other elements of the competition. Alloa and Clackmannan played out a 1-1 draw in Alloa after extra time and there is no evidence of any replay being staged. Wood scored early on for Alloa, but Currie’s equaliser took the game to the extra half hour. In the end, a sum of over £100 was raised for the Redding Relief Fund. East Stirling beat Stenhousemuir 4-1 to progress to the next stage. The semi-finals were never played with both Alloa and Falkirk Amateurs scratching from their ties. The final match was staged for November 7th. 1923. 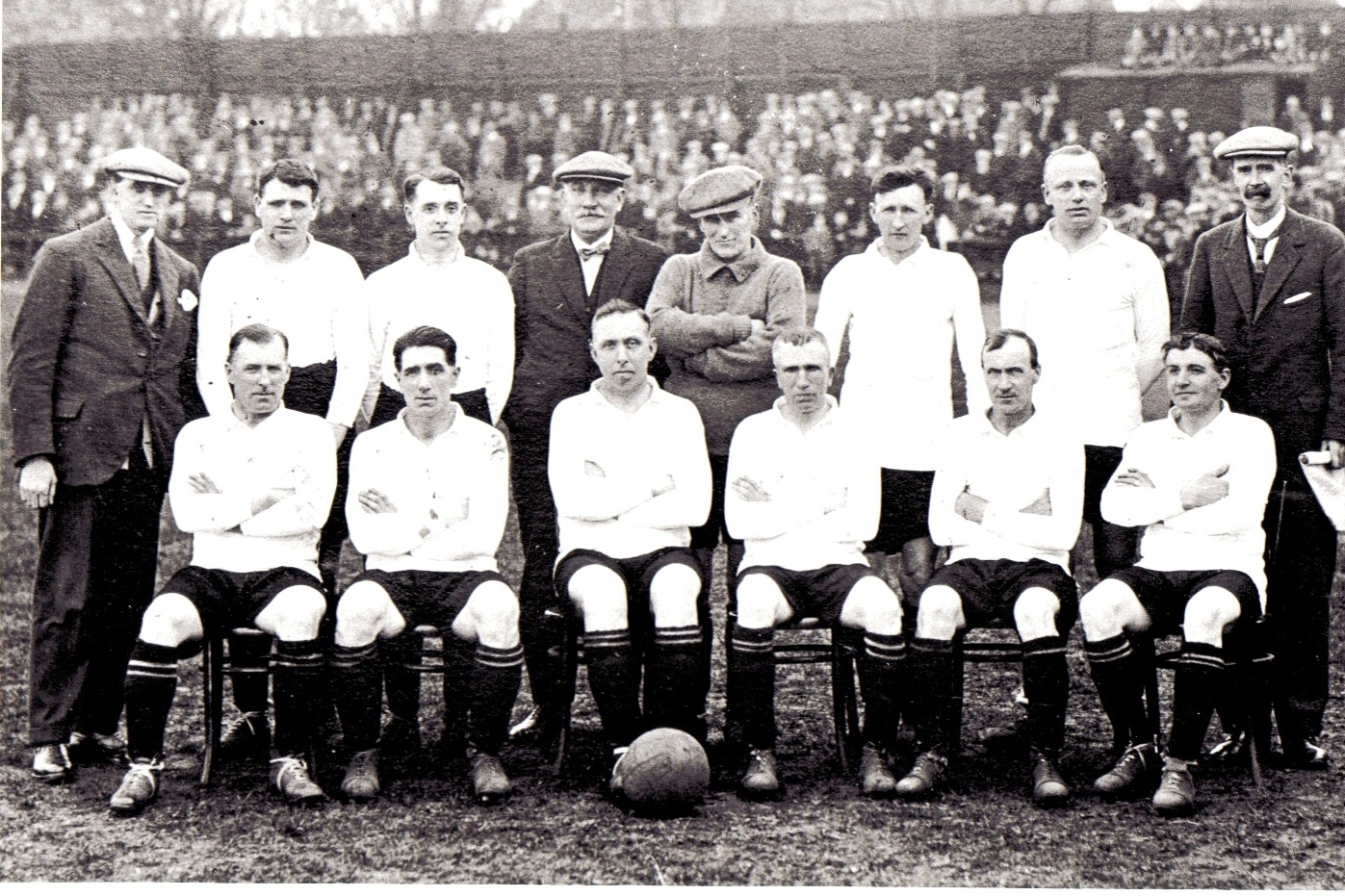 Falkirk also arranged a special match against a Scottish League XI at Brockville for the afternoon of Wednesday October 17th.  The Scottish League were pleased to support the cause and sanctioned the fixture.

As always happens, there were some call-offs from the original select, notably Harper of Hibs, John White of Hearts and Cassidy of Celtic, but the replacements were more than adequate. Bairns fans were given a chance to see some famous faces, especially Hughie Gallacher of Airdrie and the famous Patsy Gallagher of Celtic. The game started in lively fashion with Puddefoot missing a good chance in the first few minutes. The League Select took a while to get used to their new team-mates but Archibald set up a good chance for Rankin who should have done better. Celtic’s veteran full-back McNair held Puddefoot in check and the battle between Archibald and Dougall was one of the game’s highlights. Falkirk’s defence stood up well to the talented front five of the select team, but the home forwards were poor and well below form. Gourlay and Moore looked a shadow of their former selves, and posed little threat. Chances came at both ends, which really should have been put away. The main culprits in that first half were Archibald and John Hunter.

Patsy Gallager showed great skill and kept the crowd entertained with mazy runs and he really should have opened the scoring when he was right through on Ferguson. The little Irishman was a real star and one great run which ended with a header coming back off the bar with Ferguson beaten drew great applause from the crowd. The half-time score was 0-0 and it had been far from a traditional exhibition game.

Scott was short with a pass-back to Ferguson and Patsy Gallagher nipped in to intercept, but his shot was agonisingly wide of the post. Some of his play was simply outstanding and he looked a class act- even at this stage of his career.  The only goal of the game came in the 75th minute, when Archibald broke on the right to set up HUGHIE GALLACHER who slotted home. There were few who would have said that the League Select were the better team, but Falkirk’s forwards had been a big let-down. One scribe described Syd Puddefoot as being “hopelessly out of it” and the left-wing pairing of Gourlay and Moore as “feckless”. While Patsy Gallagher was the real star of the select team, the Man of the Match was Falkirk’s Tom Glancy. He was a real revelation in his new position of right half and “was not excelled by any other player on the field” as the reporter stated.

Over £300 was raised for the Redding Relief Fund by the staging of the match which was a sizeable amount when related to modern times. Falkirk’s James Hunter and Willie Dougall must have impressed the Scottish League selectors at the game, as both were chosen to face the Irish League at the end of the month.

The final of the Henderson Watch competition saw Falkirk beat East Stirling 1-0, with Tom Glancy scoring the winner. The game took receipts of £35 bringing the total from the modified tournament to £230.

The Falkirk players each received their gold watch and the team picture shows the players involved.

The winning team are shown above:-

The Redding Pit Disaster Relief Fund raised a tremendous amount of money and the Provost and the Falkirk Herald funds had reached a total of £60,000 by the end of year one. The names of those who lost their lives are inscribed on a memorial plaque. The impact of the loss of 44 lives in such a small community would be little short of catastrophic.

Redding Colliery was eventually closed in 1958. Each year, on the first Saturday in August, the Sir William Wallace Grand Lodge of Scotland Free Colliers march in memory of the men who lost their lives in the tragedy.