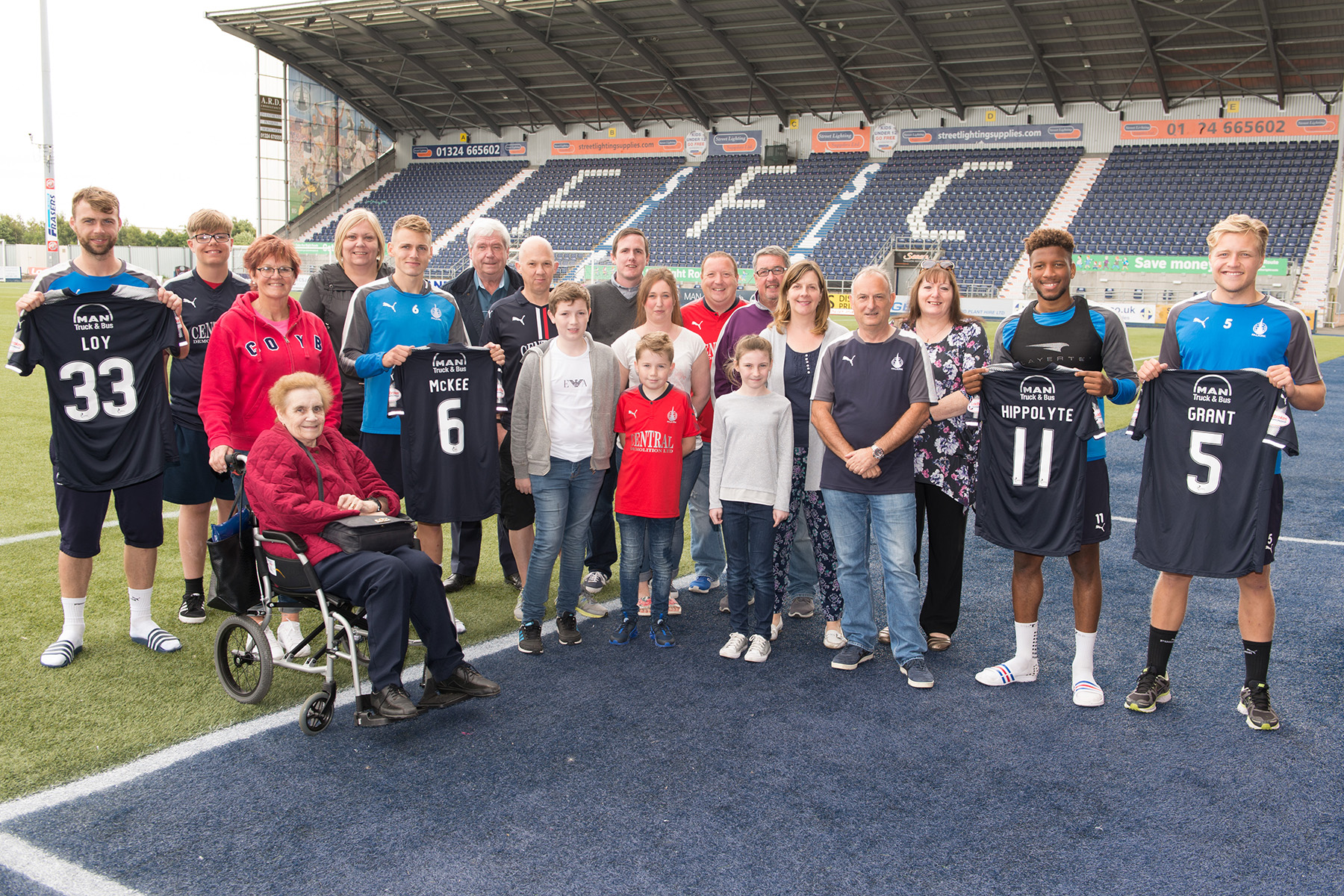 Since 2015, there has been an ever growing group of Falkirk supporters who have taken it upon themselves to put money towards sponsoring player shirts every season. The Equity Bairns, as they’re known, have been sponsoring Falkirk players’s shirts for the last five years not only to support the club, but to give to local charities in the community as well.

We spoke to Mark Jeruzal, the man behind it all, so he could tell us all about the Equity Bairns and how the whole idea came about.

Mark has been a Falkirk fan all his life and can remember his first game, and how much Falkirk meant to him even at such a young age. Since that time, he has been involved in his beloved club in more ways than one:

“My first Falkirk game was probably way back in 1964 when I was seven years old. That was against Hibs. We lost 4-1 and I was crying all the way home.

“I’ve been involved one way or another with Falkirk Football Club through the years as a fan on the terracing at Hope Street, a season ticket holder, a shareholder, and occasional contributor to the match-day magazine. I’m now pretty old, so have been a Falkirk Bairn for a long time now, through all the highs and lows.

So it comes as no surprise that, along with a few others, Mark ended up being a driving force behind the conception of the Equity Bairns. Mark spoke of how the idea came about in humble beginnings:

“Sponsoring a player at the club was really an idea proposed by Gordon Legge on an e-mail fans forum called Bairnmail. Gordon actually commented on the forum that we should all stick in a small amount and sponsor a players shirt on behalf of Bairnmail. He suggested that I should organise as I was retired (mistakenly I may add). But since it was a great idea I agreed to run with it.

“So in 2015 Equity Bairns was born. A few of us on Bairnmail agreed to put an amount of cash in but not enough to sponsor the shirt.  At that time Facebook was becoming more popular so I decided to post our idea on there too. Effectively I thought that many fans would like to sponsor a shirt but didn’t want to pay the full amount of £490.”

“In the first season I got around 25 replies back. Some people put in £40, some put in £10, but we somehow, with gentle persuasion we managed to get the required £490. The Equity Bairns were on their way.

“for our first shirt we managed to sponsor Bob McHugh, which turned out a real coup for us. As all Falkirk fans will know, Bob became a legend in that season, banging in all the late goals for us at that time. 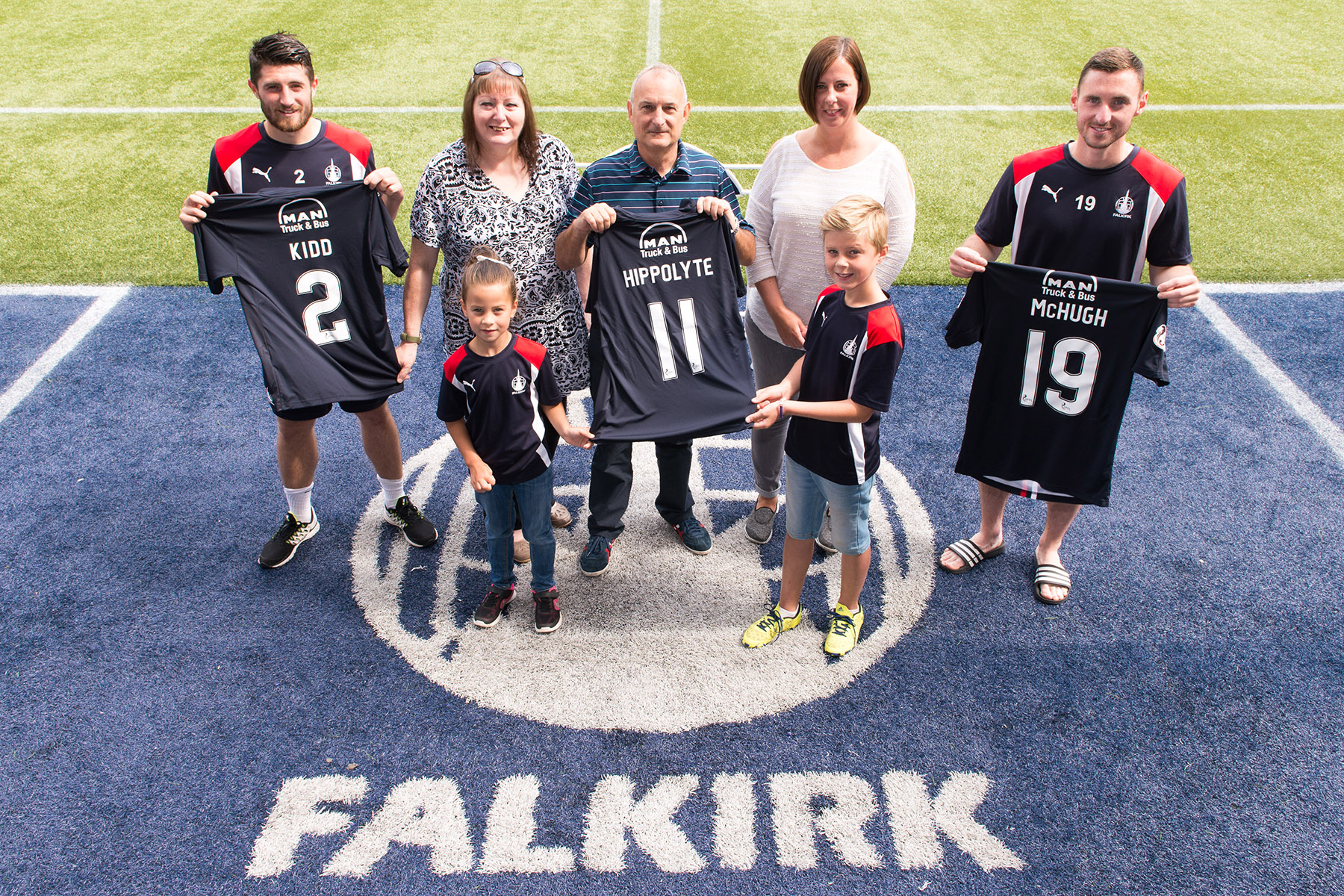 “However we decided at the outset that the Equity Bairns would not just back the club by sponsoring a shirt but we had an idea to do something that would benefit the local community as well:

“At the end of the season we decided we were going to auction the shirt off to a nominated charity. The members of Equity Bairns decided that the Strathcarron Hospice should benefit and I think we made around £160 for them.

“It kind of took off from there. The next again year we really expanded, mostly by word of mouth, and managed to sponsor three shirts. For this we had to “sell” 147 spaces at £10 each. This generated £1470 for the club. Of course, this effectively meant we could auction off the three shirts to charity at the end of the season, so our charities also benefited. This time we made around £500 – £600 which we gave to The Strathcarron Hospice and Falkirk Mental Health.

“The next again season we sponsored three shirts and a pair of boots so it was increasing as time went on. We started to get a lot more interest and a lot more money for charity.

“For the last couple of seasons we’ve actually sponsored four shirts. 2018 was a particularly good year, we managed to auction off the four shirts but we were also given other items of interest from other people to auction and we made over £2000 for the Chris Mitchell Foundation.

“Last season we sponsored four shirts again and made over £2000 for Maggie’s Forth Valley, Strathcarron Hospice and Syngenta Cerebral Palsy Football Team.”

The tremendous work that the Equity Bairns has done and continue to do has caught the attention of more Falkirk fans who want to get involved.

“This year I’ve got quite a few new fans joining us, which is really pleasing as it means word of what we are doing is getting out there. We now have around 150 members and we are going to sponsor five shirts this season, which for us, is unprecedented.”

The option to sponsor player shirts is one that is available at most football clubs, however most of the time, all of the money goes to the club. It is not often you see a group of fans like the Equity Bairns club together to not only support their club, but also raise money for charities in the local community:

“I’ve seen other clubs do sponsored shirts where all the money goes to the club but I’ve not seen anybody do the double whammy of sponsorship and charity. The Equity Bairns are helping the club through sponsorship and we’re also doing good for local charities as well. With 5 shirts this season we’re going to give £2700 to the club. When you add the £2000 we have given to local charities this year, We’re actually generating nearly £5000.”

For some, it also provides the opportunity to give back to charities that are personally close to their hearts:

“The pleasing thing is that we, as a group are Falkirk fans can both give something to the club we love and also donate to our nominated charities at the same time. There’s a personal thing for me there as well as I have ties to Maggie’s at Forth Valley. I have to admit, I think the Equity Bairns members all get a warm glow when we get a reply back from the charities appreciating the work we do ”.