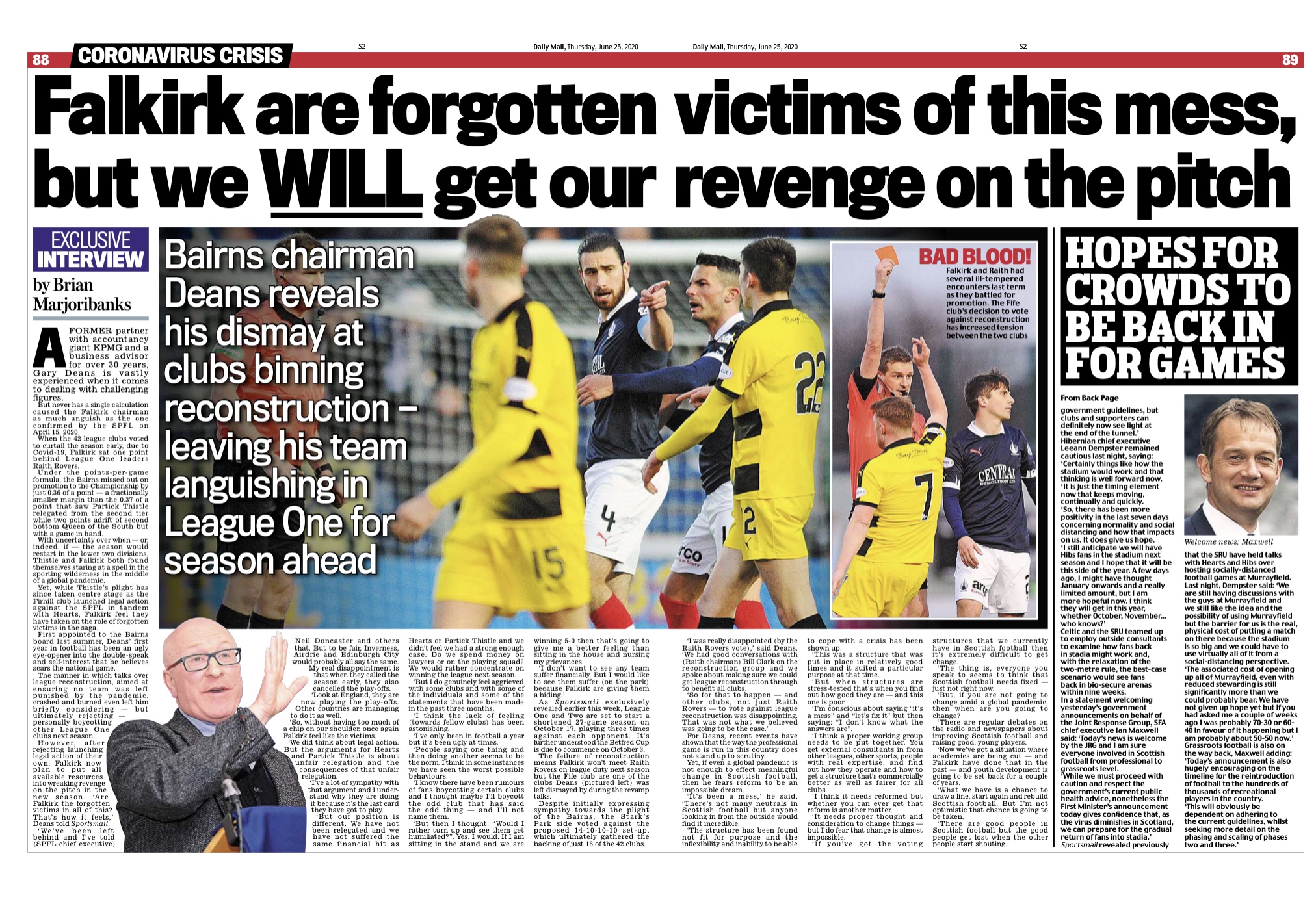 In addition to the video Q & A we published last night, Chairman Gary Deans also gave an in-depth interview to Scottish Daily Mail Sports Writer Brian Marjoribanks which featured in the paper earlier this week…

A FORMER partner with accountancy giant KPMG and a business advisor for over 30 years, Gary Deans is vastly experienced when it comes to dealing with challenging figures.

But never has a single calculation caused the Falkirk chairman as much anguish as the one confirmed by the SPFL on April 15, 2020.

When the 42 league clubs voted to curtail the season early, due to Covid-19, Falkirk sat one point behind League One leaders Raith Rovers.

Under the points-per-game formula, the Bairns missed out on promotion to the Championship by just 0.36 of a point — a fractionally smaller margin than the 0.37 of a point that saw Partick Thistle relegated from the second tier while two points adrift of second bottom Queen of the South but with a game in hand.

With uncertainty over when — or, indeed, if — the season would restart in the lower two divisions, Thistle and Falkirk both found themselves staring at a spell in the sporting wilderness in the middle of a global pandemic.

Yet, while Thistle’s plight has since taken centre stage as the Firhill club launched legal action against the SPFL in tandem with Hearts, Falkirk feel they have taken on the role of forgotten victims in the saga.

First appointed to the Bairns board last summer, Deans’ first year in football has been an ugly eye-opener into the double-speak and self-interest that he believes scars the national game.

The manner in which talks over league reconstruction, aimed at ensuring no team was left punished by the pandemic, crashed and burned even left him briefly considering — but ultimately rejecting — personally boycotting other League One clubs next season.

However, after rejecting launching legal action of their own, Falkirk now plan to put all available resources into wreaking revenge on the pitch in the new season. ‘Are Falkirk the forgotten victims in all of this? That’s how it feels,’ Deans told Sportsmail.

‘We’ve been left behind and I’ve told (SPFL chief executive) Neil Doncaster and others that. But to be fair, Inverness, Airdrie and Edinburgh City would probably all say the same.

My real disappointment is that when they called the season early, they also cancelled the play-offs. ‘Look at England, they are now playing the play-offs. Other countries are managing to do it as well.

‘So, without having too much of a chip on our shoulder, once again Falkirk feel like the victims.

‘We did think about legal action.

‘I’ve a lot of sympathy with that argument and I understand why they are doing it because it’s the last card they have got to play.

‘But our position is different. We have not been relegated and we have not suffered the same financial hit as Hearts or Partick Thistle and we didn’t feel we had a strong enough case. Do we spend money on lawyers or on the playing squad? We would rather concentrate on winning the league next season.

‘But I do genuinely feel aggrieved with some clubs and with some of the individuals and some of the statements that have been made in the past three months.

‘I think the lack of feeling (towards fellow clubs) has been astonishing. ‘I’ve only been in football a year but it’s been ugly at times. ‘People saying one thing and then doing another seems to be the norm. I think in some instances we have seen the worst possible behaviours.

‘I know there have been rumours of fans boycotting certain clubs and I thought maybe I’ll boycott the odd club that has said the odd thing — and I’ll not name them.

‘But then I thought: “Would I rather turn up and see them get humiliated?”. Yes, I would. If I am sitting in the stand and we are winning 5-0 then that’s going to give me a better feeling than sitting in the house and nursing my grievances.

‘I don’t want to see any team suffer financially. But I would like to see them suffer (on the park) because Falkirk are giving them a hiding.’ As Sportsmail exclusively revealed earlier this week, League One and Two are set to start a shortened 27-game season on October 17, playing three times against each opponent. It’s further understood the Betfred Cup is due to commence on October 3. The failure of reconstruction means Falkirk won’t meet Raith Rovers on league duty next season but the Fife club are one of the clubs Deans (pictured left) was left dismayed by during the revamp talks.

Despite initially expressing sympathy towards the plight of the Bairns, the Stark’s Park side voted against the proposed 14-10-10-10 set-up, which ultimately gathered the backing of just 16 of the 42 clubs.

‘I was really disappointed (by the Raith Rovers vote),’ said Deans. ‘We had good conversations with (Raith chairman) Bill Clark on the reconstruction group and we spoke about making sure we could get league reconstruction through to benefit all clubs.

‘So for that to happen — and other clubs, not just Raith Rovers — to vote against league reconstruction was disappointing. That was not what we believed was going to be the case.’ For Deans, recent events have shown that the way the professional game is run in this country does not stand up to scrutiny.

Yet, if even a global pandemic is not enough to effect meaningful change in Scottish football, then he fears reform to be an impossible dream.

‘It’s been a mess,’ he said. ‘There’s not many neutrals in Scottish football but anyone looking in from the outside would find it incredible.

‘The structure has been found not fit for purpose and the inflexibility and inability to be able to cope with a crisis has been shown up.

‘This was a structure that was put in place in relatively good times and it suited a particular purpose at that time.

‘But when structures are stress-tested that’s when you find out how good they are — and this one is poor.

‘I’m conscious about saying “it’s a mess” and “let’s fix it” but then saying: “I don’t know what the answers are”.

‘I think a proper working group needs to be put together. You get external consultants in from other leagues, other sports, people with real expertise, and find out how they operate and how to get a structure that’s commercially better as well as fairer for all clubs.

‘I think it needs reformed but whether you can ever get that reform is another matter.

‘It needs proper thought and consideration to change things — but I do fear that change is almost impossible.

‘If you’ve got the voting structures that we currently have in Scottish football then it’s extremely difficult to get change.

‘The thing is, everyone you speak to seems to think that Scottish football needs fixed — just not right now.

‘But, if you are not going to change amid a global pandemic, then when are you going to change? ‘There are regular debates on the radio and newspapers about improving Scottish football and raising good, young players.

‘Now we’ve got a situation where academies are being cut — and Falkirk have done that in the past — and youth development is going to be set back for a couple of years.

‘What we have is a chance to draw a line, start again and rebuild Scottish football. But I’m not optimistic that chance is going to be taken.

‘There are good people in Scottish football but the good people get lost when the other people start shouting.’

(This article first appeared in the Scottish Daily Mail on June 25, 2020)