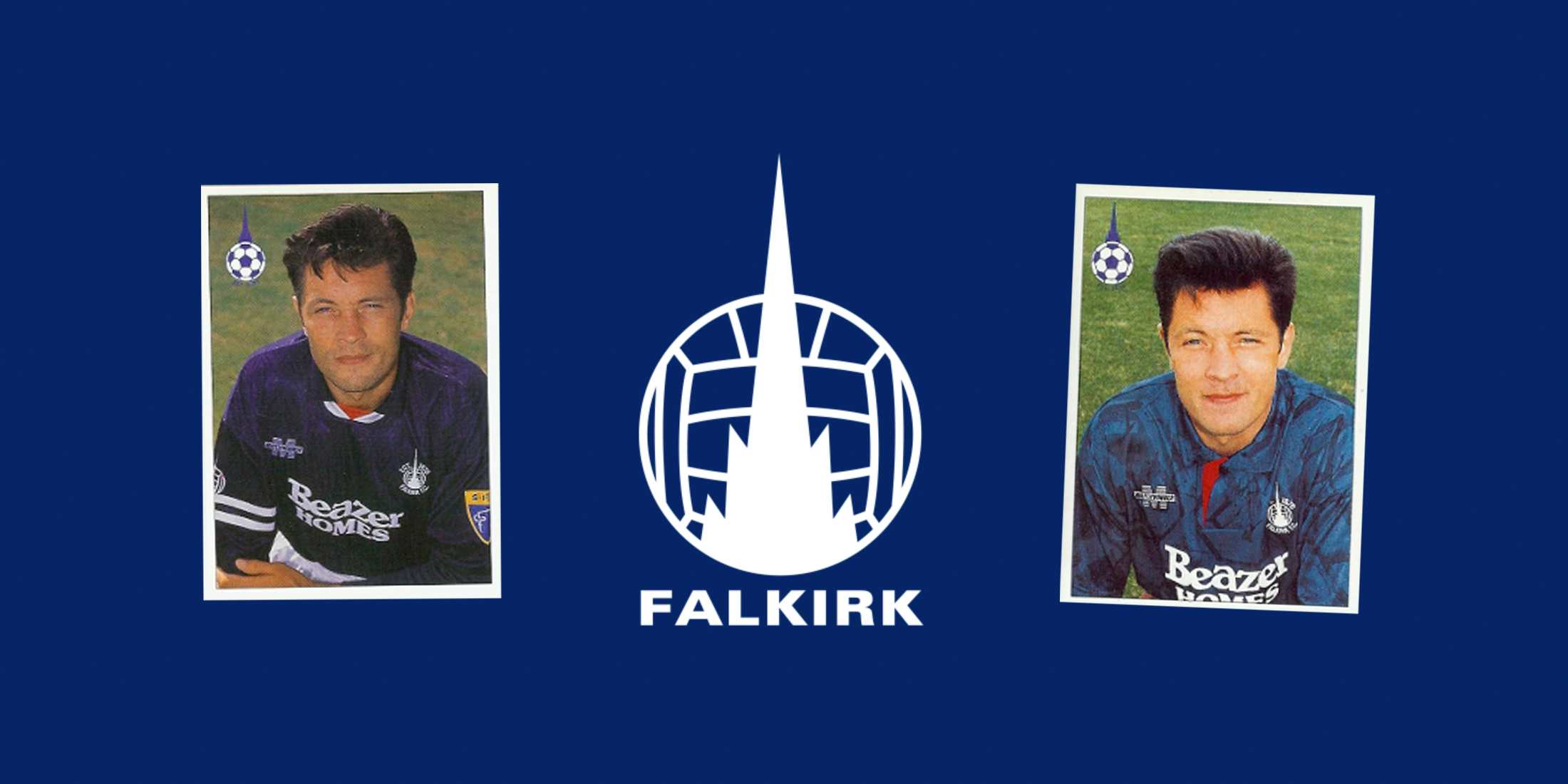 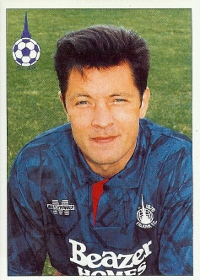 Former defender Joe McLaughlin played for a number of big clubs throughout his career, but despite having played for Watford and making over 200 appearances for Chelsea, some of Joe’s best memories were made at Falkirk.

After 6 years and 220 appearances for Chelsea, Joe found himself playing in a darker shade of blue within 3 years of leaving Stamford Bridge. He took the time to talk us through how the move came about:

“I had moved to Watford and I wasn’t really enjoying it too much, it was coming to the end and Jim Jeffries was looking for a centre back apparently. I can’t remember how he actually turned up at the game or how he knew I was available because I had two years left on my contract at Watford.

“Colin Lee had just signed and he was a player with me at Chelsea. He got the Watford job and he brought in David Haye as his assistant. David had tried to sign me for Celtic so I thought it was quite a good move and things would work out alright.”

Things were looking good for Joe with Watford’s new set-up but it didn’t take long for that to change, putting Joe in a difficult position:

“They signed me from Charlton for £500k which was a large amount of money in those days, back in 1989/90. So I went to Watford, did okay, made captain, and three months into the job, Colin and David got the sack and Steve Perryman came in. Steve Perryman and I had a bit of history from our Chelsea – Tottenham days.

“I didn’t really think anything of it but he came in and we just didn’t hit it off at all, I could sense that he wasn’t happy with me. I was the captain but he very rarely spoke to me or anything and I thought ‘this is not looking good’. We got off to a bad start and then he said “look, if you can find a club then I’ll be happy to let you go but we’ll be looking for a bit of money for you because we just paid half a million pounds”, I said “If I can get a club I’ll be delighted because it doesn’t look as if I’m going to be playing here.”

However, it wasn’t all bad. Joe got an unexpected amount of playing time which helped attract certain clubs:

“In the end I actually did play, I ended up playing quite a lot of games but each time Steve kept saying “we’ve had a shout from Gillingham, we’ve had a shout from such-and-such, but they’re only offering this and that” and I thought, ‘there’s no way I’m dropping down to that level, and then I heard a whisper that Falkirk were having a look and Jim Jeffries was coming down to a reserve game that I was playing in against Queen’s Park. Sure enough, he came to the reserve game. I played quite well and he made an offer, I think it was a hundred and odd thousand which was a lot of money for Falkirk.”

Despite being a native Scotsman, Joe had his reservations about returning home to play his football as his plans didn’t involve seeing out the rest of his career north of the border. The lure of playing with a squad like Falkirk managed to sway him though:

“I wasn’t really wanting to go back home, I was still thinking I was going to stay to have my whole life down in England but I thought, ‘I’ll go back to Falkirk.’ The money was quite good believe it or not because it was a different era. Falkirk were in the Premier League and they had some really good players. So long story short, I signed for Falkirk, went back up the road and had four great years.”

It appeared to be an ideal start to life at Falkirk for Joe, managing to get on the scoresheet on his debut, a game against St. Johnstone, which he remembers well. But his first year ended up being marred by an unfortunate injury and The Bairns’ relegation from the Premier League. Despite these setbacks, Joe and the rest of the squad, who he speaks very highly of, quickly turned things around and were back to their best in no time:

“The first year, I got injured and, okay it wasn’t really my fault, I didn’t mean to get injured, but I did. We trained on that crazy astro outside Brockville and it was like cement. When you’re 15 stone of muscle, it doesn’t do you any good trying to run on that, you’d need to throw an anchor when I tried to stop on that! Anyway, I tore my achilles and when you’re 31, it’s not a good time to be getting an injury like that. Because I’d just signed for the club I didn’t want to let them down and kept trying to come back. I got an operation at the end of the season and it was make or break, luckily enough I came back and felt brilliant and ended up playing for another nine years.

“Unfortunately we got relegated that year and I felt bad because I thought if I hadn’t have been injured we would have stayed up. We came back up though and had two great years in the premier league again, we beat Rangers, we beat Celtic, and to beat those teams any day of the week was brilliant. We had some great players and that was what was so good about it, we had a great, great squad of players for those four years. If you named some of those players: Mo Johnson, Frank McAvennie, Ian McCall, Eddie May, Brian Rice, Tom McQueen, Richard Cadette, Yogi. People just don’t get how good we actually were at that particular time. It was Brilliant.” 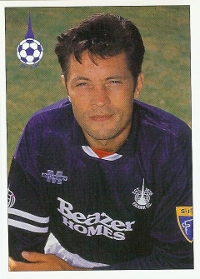 Like most former Falkirk players, Joe felt there was something special about Falkirk and spoke not only of his feeling about Brockville and how welcome he felt there, but of the bond between the players and how special the dressing room atmosphere was:

“I loved Brockville. I felt a real affinity to it as soon as I walked in, that old wooden stadium and that atmosphere, it can’t be replicated. Really good days and I totally enjoyed most of my time there.

“I actually feel more welcome at Falkirk than I do at any other club. I feel really comfortable going back there and I always have done. When you’ve got a really good bunch of players and the dressing room is good, the key was the dressing room, every day was a laugh. We worked hard, but everyday you wanted to go in, you didn’t want to leave training. Everyday during training at Falkirk was just brilliant, I loved being there every day.”

“It was a good bunch of boys and everybody got on. Yes, we fell out about things and didn’t agree on certain things, but that’s what made us so good, we all wanted to win. There were so many guys that would run through brick walls just to play for each other. We were all pals, we all had great attitude in the changing room and that’s always something I look for in the clubs I’ve been involved with as a coach. If you’ve got a good team spirit and good players, you’re going to do well. You don’t really need to do a lot as a coach, just guide them a wee bit.”

Joe didn’t only have a lot of praise for his teammates, he also spoke highly of the managerial pairing at the time, Jim Jefferies and Billy Brown:

“Jim didn’t mince his words, at half-time him and Billy would come in and have a right go at people. It wasn’t personal, if you weren’t playing well, you were told you weren’t playing well and you had better do something about it, and that was how it went. It got the best out of you. For whatever reason, all the personalities and everything, it just worked. There weren’t many people that didn’t like what was going on at Falkirk.”

“We had a fair bit of success, winning the B&Q Cup final, doing well in the premier league, competing in the premier league not just hanging on, competing. Those are the things that I remember, along with the other players, I just look back and think ‘what a team we had, and what laugh we had’, it was brilliant.

“The fans just like to see people working hard and that never get beat attitude and most of the boys had that, and if they didn’t have it, they were told. Nobody let anybody have an easy time and the demands on the players was incredible and we were all driving each other on the whole time.

“I loved my time at Falkirk and I’ll certainly be back this year.”