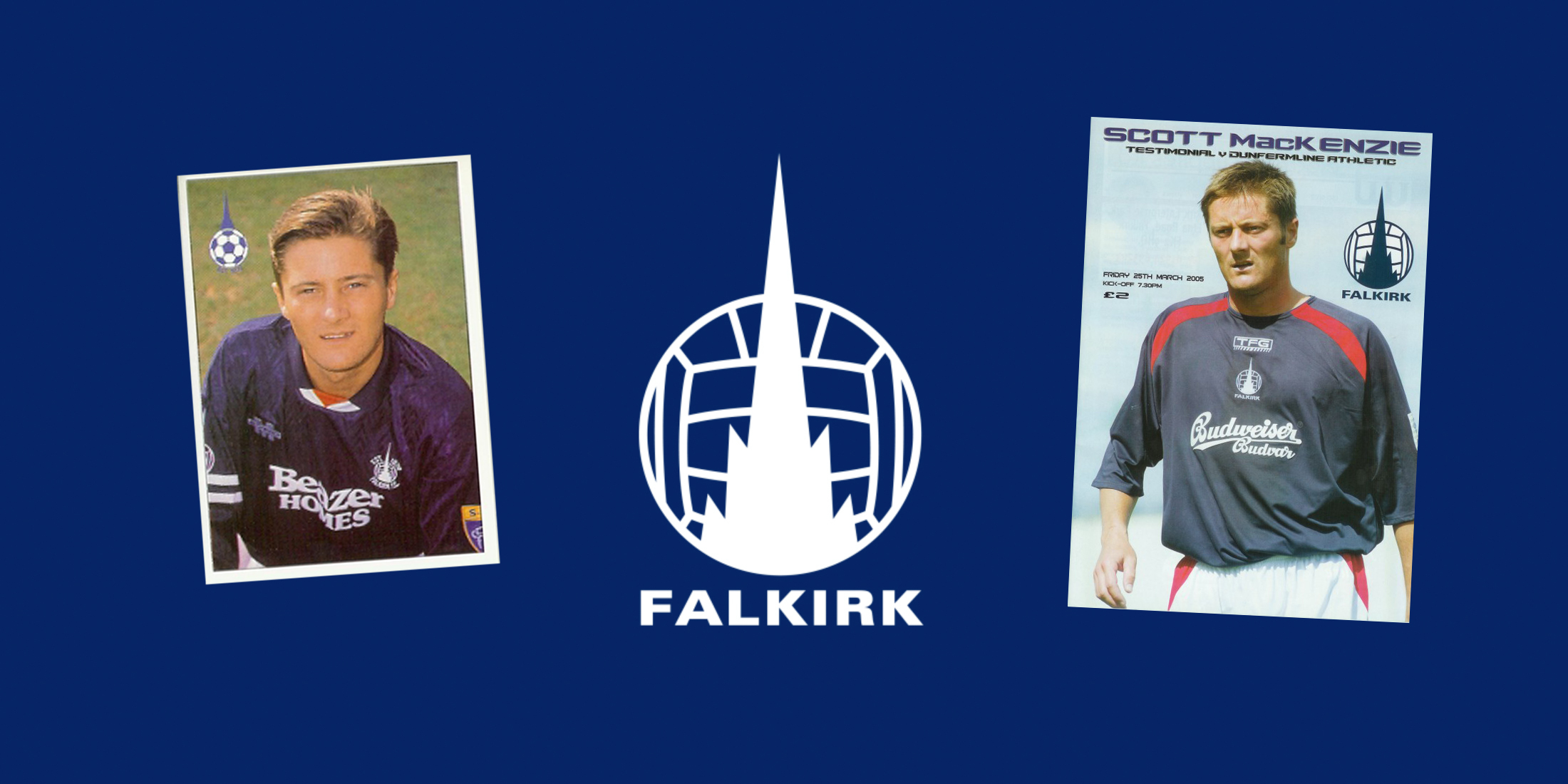 Scott MacKenzie was signed by Jim Jefferies from Musselburgh Athletic in 1990 and it was a signing that would benefit the club long after the then Bairns manager left. It took Scott a couple of seasons to establish himself, but once he did, he would go on to be a regular in the team for the rest of his time at the club. Scott experienced many highs and lows in his career and can look back on his time at Falkirk with immense pride. He featured in Championship and Challenge Cup winning Falkirk teams and was also a member of the 1997 Scottish Cup Final team.

During his 14 years at the club he played under six managers and he was a permanent fixture in their respective teams. Scott MacKenzie was a ball playing midfielder who had a great engine. He worked tirelessly for the team and was a well-respected teammate and a fans favourite, who would go on to record over 300 appearances in the navy blue.

Scott established himself in the team during the 1993-94 season having featured occasionally during Falkirk’s two season Premier League sojourn. Back in the Premier League, Scott was a mainstay in the Falkirk midfield and produced consistent performances as Falkirk established themselves in the top division. Eventually the club were relegated and despite changes in the management Scott was still a consistent feature in the team. Between, 1996 – 2001, Scott would endure testing times as a Falkirk player. Relegation, defeat in the Cup final, followed by success in the Challenge Cup, but then his and the clubs future were thrown into doubt when the club was placed in provisional liquidation in March 1998. The next three seasons saw Falkirk miss out on promotion and the new stadium regulations made it seem like an impossible dream.

After much soul searching Scott decided to leave the club in 2000. He moved to St Mirren, but the lure of Falkirk saw him return after a short time away. In 2002, new manager Ian McCall set about rebuilding the squad after they had only just escaped relegation due to Airdrie’s liquidation and he brought Scott back to the club. It was like he had never been away. Once again Scott produced the goods and was a permanent fixture in the team that clinched the First Division Championship in 2003.

Scott endured disappointment as Falkirk were denied promotion on the grounds of a non-compliant stadium and a refusal by the SPL to allow ground sharing in the top flight. After a season ground sharing at Ochilview, Falkirk moved to their new stadium at Westfield in 20004 and Scott was a presence in the team that completed a League and Challenge Cup double during the 2004-05 season. Despite being a squad member, Scott didn’t feature in the new team that was assembled for the SPL and played just a solitary game in a Stirlingshire Cup tie, an unfair end for a great club servant.

Scott MacKenzie was a quality midfielder who became a firm fans favourite because he was a wholehearted player who gave his all for the club every time he pulled on a Falkirk jersey. Scott is a member of the Falkirk FC Hall of Fame and a club legend.

“Jim is my choice of manager as he gave me my chance in senior football, him and Billy (Brown) and I made sure I took my chance when it was given. I took a while to get into first team and I was grateful for the opportunity. I’ll probably upset a few by choosing Jim, but I can’t pick them all! Totts won’t be happy nor will Ian McCall, as Ian was very astute and Totts was a great man manager”. 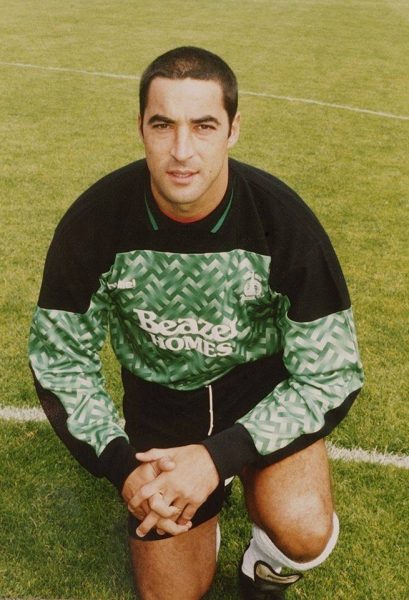 “I played with some great keepers, but Parksy was a real character, ‘the greek god’ as we called him! Nelly and Westy (Craig Nelson and Ian Westwater) are just pipped because Westy hardly played with me but was a very good ‘keeper. I played more games with Fergie (Allan Ferguson) or Nelly, but in that era of the mid-90’s you were playing against your top Rangers and Celtic teams and Parksy had great experience and was a known name when he came up here, a great player”.

“He just epitomised everything, an absolute leader on the park. Great around the dressing room, you ask anyone who’s played with Falkirk. He would rant at us, demanding our best, but he’s mellowed a bit now! He’s a born winner and wants his team to do well and win. He’s taken that into management too”.

“This one is a nightmare, it’s so hard to choose between guys like Joe McLaughlin, Kevin James and Jamie McGowan. I’d originally gone for Big Joe, as he was a terrific player, but now I think about it I also played with Olly (Neil Oliver) and David Weir too. David didn’t play professionally until he was about 22 and breaking through late on was some achievement. His career says it all, he was composed on the ball, laid back, had that nasty bit a centre back needs, was a good ball player and read the game very well. He could play right back or centre back so was flexible too, he was a management natural and got his deserved moves to Hearts and Everton”. 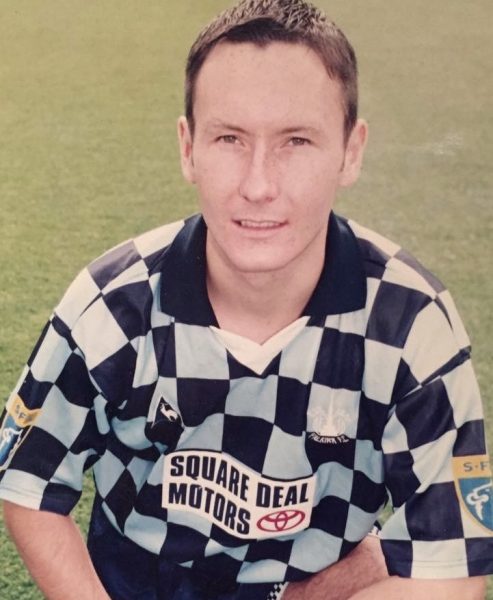 “A straight choice between Jazza or David Weir at right back. Jazza will be raging if I don’t pick him so I’m going for Jamie at right back and Davie in the middle… but now Big Joe will be after me!! Jamie captained the 1997 cup final squad. A flying machine up and down the wing, used the ball well, like David was adaptable as he could play right side or central comfortably. We’ve had some good times, Scottish Cup final memories and Challenge Cup ones too. I’m leaving a lot of legends out; John Clark, Big Joe, Olly, all great players too”.

“Hagi (Craig McPherson), Jamie McQuilken, Andy Seaton, Brian Whittaker and Joe Tortolano were all good, but Tommy gets the nod. He came from Aberdeen and I loved that he was an experienced pro at the time, his warm up was just driving the ball into the goal though! He played under Fergie at The Dons so had a good schooling, a good crosser and just good all round”. 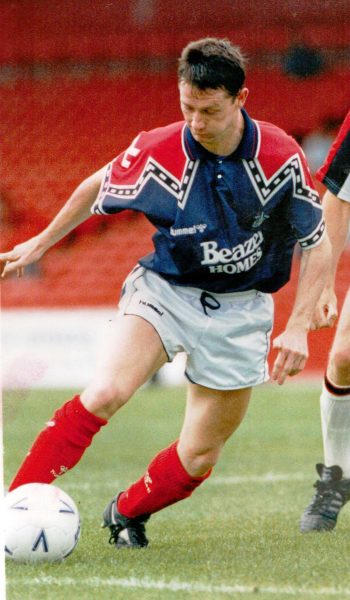 “Right wing is ‘Crunchie’ all day. Phenomenal. How he was never capped by Scotland is unbelievable! Falkirk’s player of the millenium. It was a pleasure playing beside him, a great lad off the park too. He was a born winner who could’ve easily played for either of the Old Firm and not looked out of place. He got bums off seats and on the edge of seats, a natural entertainer, very few wouldn’t pick him. A legend”.

“The best left winger I played with was Chris Waddle, who was phenomenal, but he was only around for a handful of games! Alex Taylor was good as was Ian McCall, but given I’d play him more in a number 10 role I’ll go for Davie Hagen, as I played with him for a few years. A solid, hardworking professional who grafted away non-stop. He made the made position his own during my time there despite his age, as people often forget how young he was when he joined Falkirk”.

“I’d love to pick myself in central midfield, that is the temptation, but in honesty there were guys better than me who played that role. Like Crunchie, Russell was another ‘little magician’ as per his nickname. His ability was ridiculous, he rang rings round people! He played in the Champions League and was unplayable at both Hibs and Falkirk. An incredible talent on the ball who could change games, perhaps not so much defensively, but attacking wise he was amazing”.

“This one might surprise a few people. There were so many candidates; Peter Hetherston, Ian McCall, Eddie May, Alex Taylor, David Moss, Davie Nicholls, John Henry, Steve Cody, Albert Craig, Andy Gray, Brian HamiIton, Mark Kerr, Derek Ferguson, I could go on! To balance the side a bit John is getting the nod. Very experienced, good on the ball, he worked so hard. I’m picking John as he could do both the defensive role and attacking link play too, he could get on the ball and start feeding the ball forward, a terrific all round midfielder”. 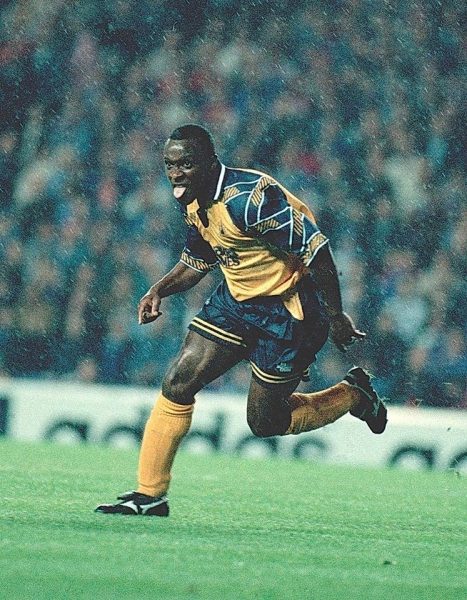 “Remembered for that famous cup victory at Ibrox, in the six yard box he was just lethal, a real predator. Almost like a Kris Boyd of our era, a strong wee guy who didn’t get the credit he deserves. He could read exactly where the ball was going to land and that’s why he scored so many goals, a winner who just wouldn’t give up. He was great to have around the changing room and he was on top form when I broke into the team”.

“I have so many to choose from; Crabbo, Mowgli (Paul McGrillen), Drinks (Kevin Drinkell), Mojo (Maurice Johnston), Marino Keith, Owen Coyle… but Crabbo gets the jersey. He scored a lot of goals wherever he went, he always wanted to do his best wherever he played. He had a great schooling from John Robertson at Hearts, he held the ball in very well… although blow on him and he’d fall down! His workrate was great, he demanded it of himself and of his teammates and I like that in a player”.