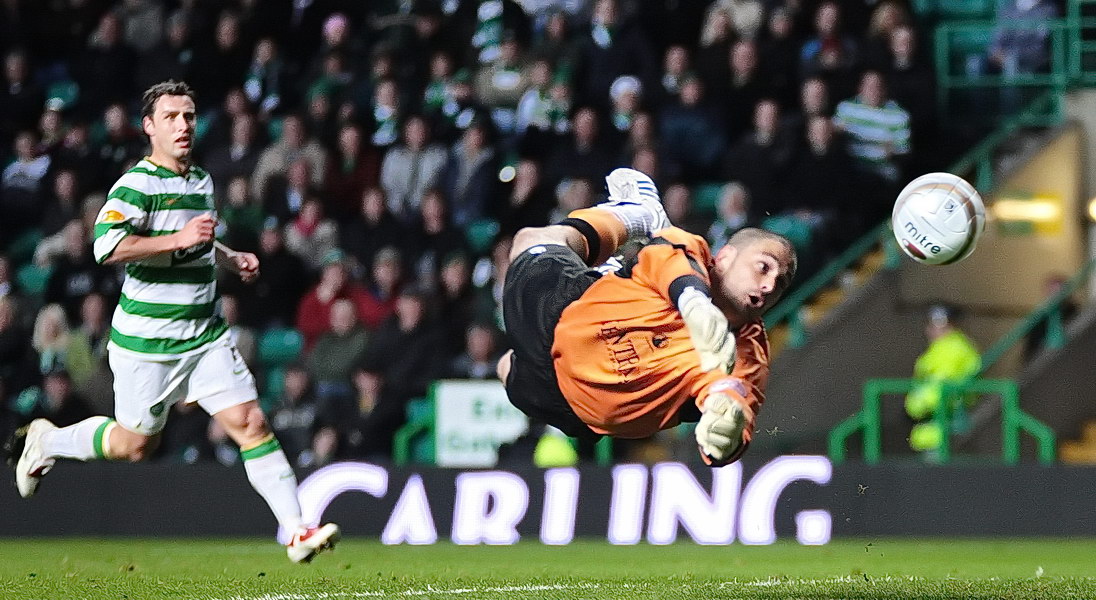 Dani Mallo may not have played for Falkirk long, but the Spanish stopper made a big impact on the club and fans. The Bairns cult-hero talked us through his memories of his whirlwind six months in Scotland.

The goalkeeper joined up with John Hughes’ side in the January window of the 2008/09 season after signing from Portuguese club Braga.

“When I signed for Falkirk it was an amazing opportunity for me because I’d never played in Scotland before. It was a new club, new teammates and a new league, so it was a good experience for me and a great move at that moment.”

“A friend of mine, David Fernández, played for Kilmarnock and he told me there was a club in Scotland looking for a goalkeeper. I was playing in Portugal at that time and his agent called me and said Falkirk wanted to see me. I thought it would be good for me, so I travelled to Falkirk and had a one-week trial.”

“For me it was amazing because it looked like a big family. It was very different from the club I was at before and I tried to do my best because I really wanted to sign for Falkirk. I must have done enough because after the week I signed my contract with Falkirk until the end of the season.” 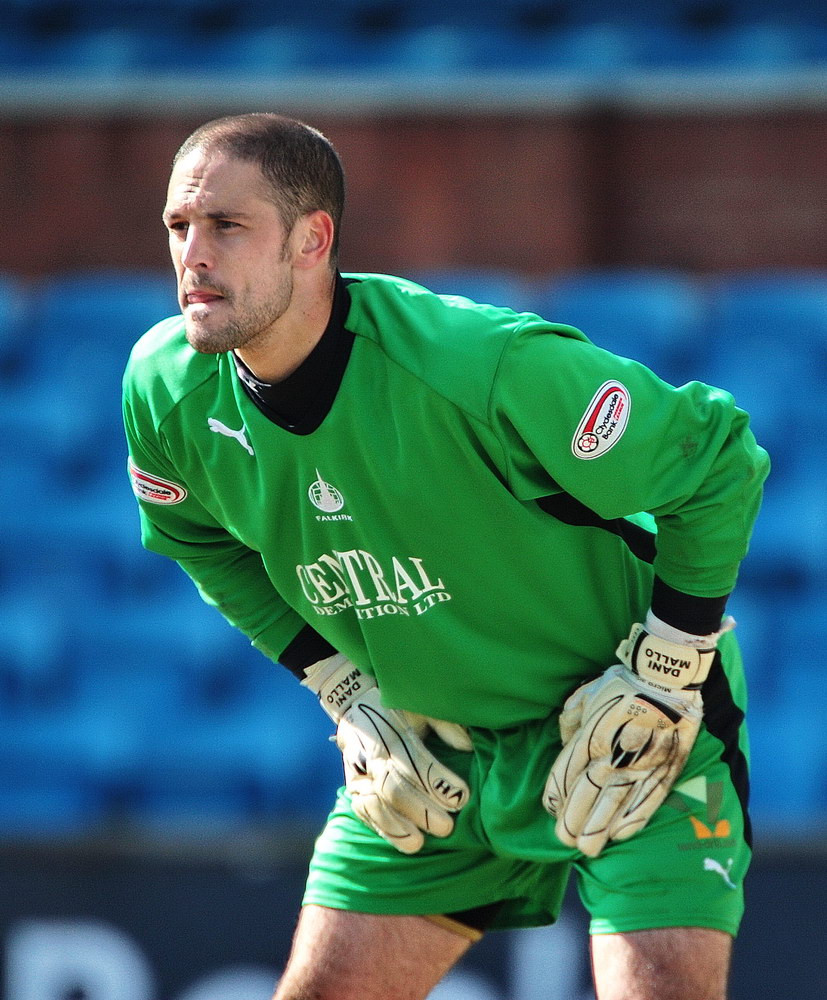 Despite moving to a completely different culture Dani quickly felt at home in Scotland. This was in large part due to his teammates, including the late Chris Mitchell who sadly passed away in 2016.

“It was a little bit difficult off the pitch at first. In Spain we are out till ten or eleven in the evening, we go to bed very late. In Scotland, and most of Europe, people go to their home at seven or eight in the evening, it got me in big trouble at the start of my time in Scotland!”

“People were very polite and friendly, which helped me and my family a lot, so the differences weren’t really a problem for me, and all my colleagues helped me to feel comfortable and confident. It was very important for me because it was my first time in Scotland, so it was a different type of football and a different language.”

“At that time there was Arnau Riera playing at Falkirk. He was Spanish like me, and he helped me a lot. Another one who helped a lot was Chris Mitchell, he was my first friend at Falkirk. He helped me to find a house, he took me from my house to the training facilities every day before I had my own car and he was a very good friend.”

“I was devastated when I heard the news about him passing away. I spoke with some of my colleagues from my season at Falkirk, like Darren Barr, Scott Arfield and Thomas Scobbie, and all of us were so sad at that unbelievable news.”

On the pitch Dani was thrown into the deep end shortly after signing, playing at Hampden in the Scottish League Cup semi-final against Rangers at Hampden on his debut! Falkirk lost 3-0 but the Spaniard was encouraged by the reaction of his team and the supporters, even after an error that resulted in the Rangers third.

“It was unbelievable, my first match was in the national stadium! My teammates told me there were some players in Scotland that never play at Hampden, and my first match was there! It was a bit of luck for me, but it was a hard start because we lost against Rangers. I think we did as well as we can and we tried to beat them, but Rangers had a very good team and we couldn’t do it in that game.” 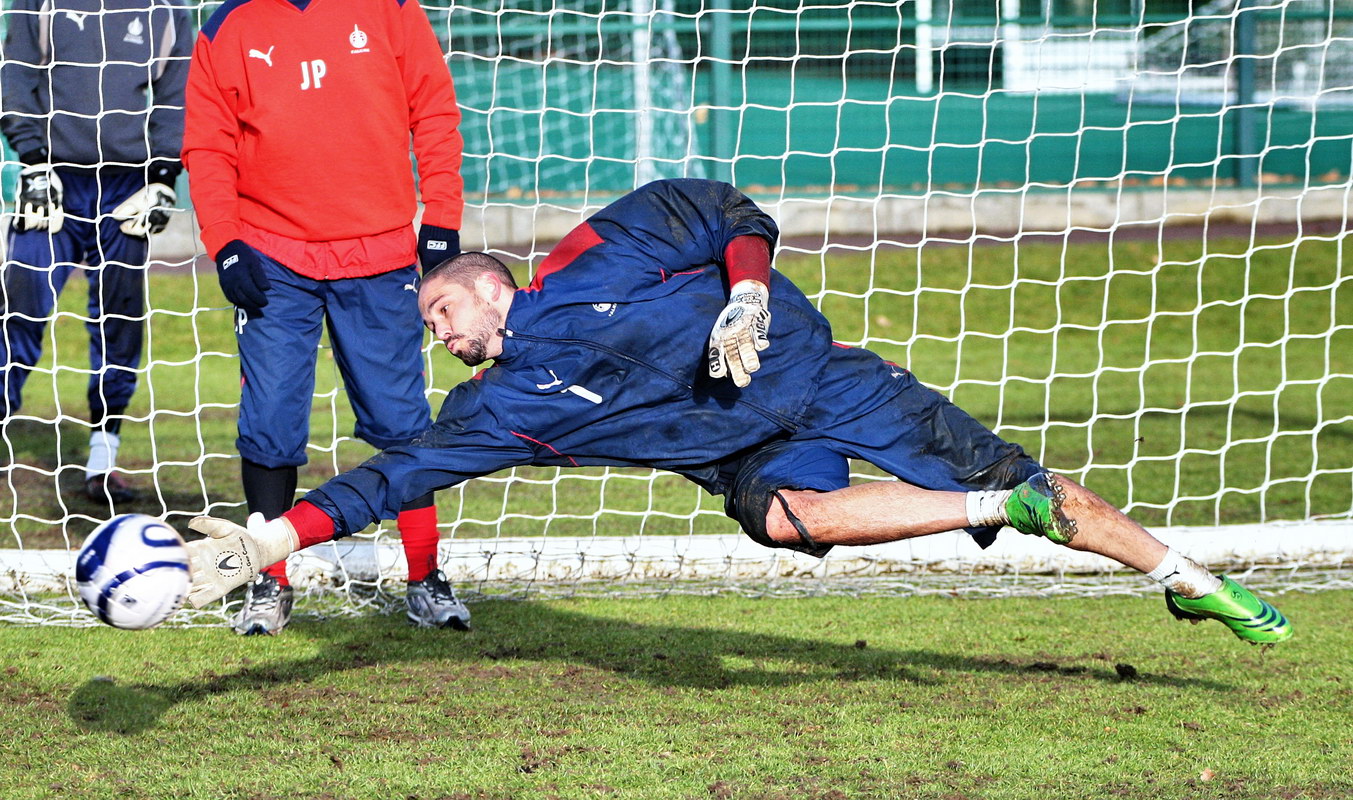 “My Falkirk family helped me a lot in my first game. I made a big mistake for the last Rangers goal but all of my teammates told me after the match not to worry, that it’s just part of the game, and to keep my head up for the next one.”

“All the fans made me feel comfortable as well. They supported me all of the game and all the week after. I was living in Stirling and all the people I saw told me ‘no matter’ about the mistake. It was a very important thing for me as a goalkeeper because it gave me lots of confidence.”

Falkirk had a chance to right those League Cup wrongs with a Scottish Cup Semi-Final, and they did in spectacular fashion as Dani and his teammates dispatched Dunfermline on the way to the club’s fourth Cup Final.

“The semi-final was my favourite match. For the first one I had quite poor English and couldn’t speak with my colleagues properly, but I think we reached this match in better conditions. It was a very good experience again because Hampden is a great stadium with a brilliant atmosphere.”

“We won the match and reached the final against Rangers. It was a beautiful game and I have very good memories of it. Dunfermline were a difficult team to beat but we played a very good match.”
The memory of Dani prevalent in most Bairns’ minds is his heroic stop against Inverness on the final day of the 2008/09 Scottish Premier League. The unbelievable save down to his left on the 12th minute set the stage for Michael Higdon to go on and score the winner in a game that saw the highland side relegated while Falkirk survived.

“The match against Inverness is unforgettable for me. I will never forget that match, not in my whole life! We fought every month, ever game, to reach the last match with the opportunity to save Falkirk. We went into that last game with the power of all the people of the club, they gave us the strength to win.”

“The feeling was unbelievable after. We had a hard season fighting every match, we had to climb a big mountain step by step. I think the most important thing that season was to save the SPL for Falkirk. For a goalkeeper to make that kind of save, it’s like when a striker scores, it’s the same feeling. Michael Higdon’s goal for him is like that save for me!”

“I had the luck to make the save, but all the team worked hard every minute of the game. Michael Higdon scored the goal after Jackie McNamara made a wonderful cross, then Darren Barr and Stephen Pressley stopped every attack of the Inverness strikers.” 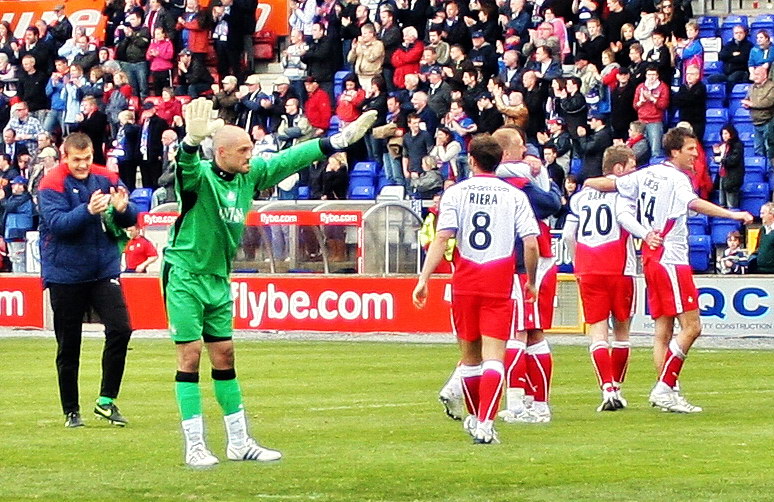 After completing the main objective of staying in the league it was cup final time for the team. Despite being huge underdogs against the Ibrox side, The Bairns looked the better of the two teams for much of the game and it took a moment of inspiration from Nacho Novo to seal it for Rangers.

“We really wanted to win the cup final. We knew it would be difficult again against Rangers, but in the first half we were very good. At the start of the second half we suffered the goal of my fellow Spaniard Nacho Novo, and then we tried but Rangers were an unbelievable team and we couldn’t put the cup in Falkirk’s hands.”

“The atmosphere was unbelievable, very good again. All the Falkirk fans came to the game and even if we couldn’t give them the cup, I hope they were proud of their team. When we got back to Falkirk, even though we didn’t win, everyone was there waiting for us. We felt very close to the supporters, it was an unbelievable feeling for the players.” 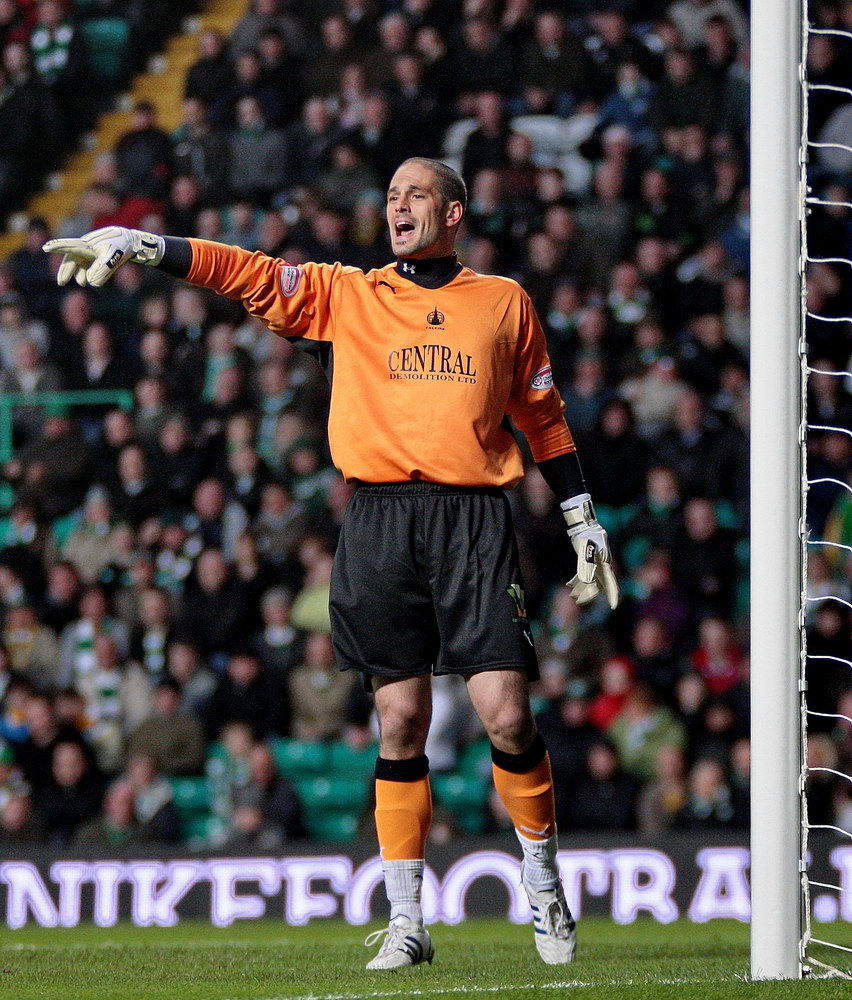 John Hughes could be a polarising figure at times, but his former player loved the time he spent under Yogi.

“He was a very strong character, but he helped me a lot. He gave me a lot of confidence and support and I only have good words for him. I know he shouts every time, but it’s not a problem for me!”

“Him and his staff all worked very hard to guide the team to achieve our objective of keeping Falkirk in the Scottish Premier League, and also to get us to the Scottish Cup Final.”

Despite playing only 20 games for Falkirk the goalkeeper endeared himself to the Bairns fans and his songs are still occasionally heard among the Falkirk faithful. He spoke on that special relationship with the supporters from his time in navy blue.

“I only have good words for Falkirk fans. There amazing with me, and the whole team. They supported us even when we were at the bottom of the table, it was an unbelievable crowd.

“Even now some Falkirk fans contact me by e-mail or social media. I always try to answer them because although it was a lot of time ago that I was a Falkirk player, I still feel like a Bairn. The saying once a Bairn, always a Bairn, I feel it!”

“I can only say thank you very much to the Falkirk fans, now and every time. I tried to do my best in all the matches and all the training sessions, and if they feel I did it, it’s the best present.”

Even after spending time with four clubs in Spain and one in India following his time in Scotland, Falkirk is still an extremely important club to Dani.

“My relationship with Falkirk is always special to me, a part of my heart is in Scotland forever. I found Falkirk in one of the hardest parts of my career and my life. I didn’t play in Portugal; I was alone, and I had a lot of problems there. When Falkirk trusted me, they gave me strength to continue my career.”

My English is not good enough to explain all my feelings! If I didn’t find Falkirk in my career maybe I wouldn’t stay in professional football, and I will never forget it. I cannot say thank you enough that Falkirk is in my life, I try to do it every day and it’s not enough!”