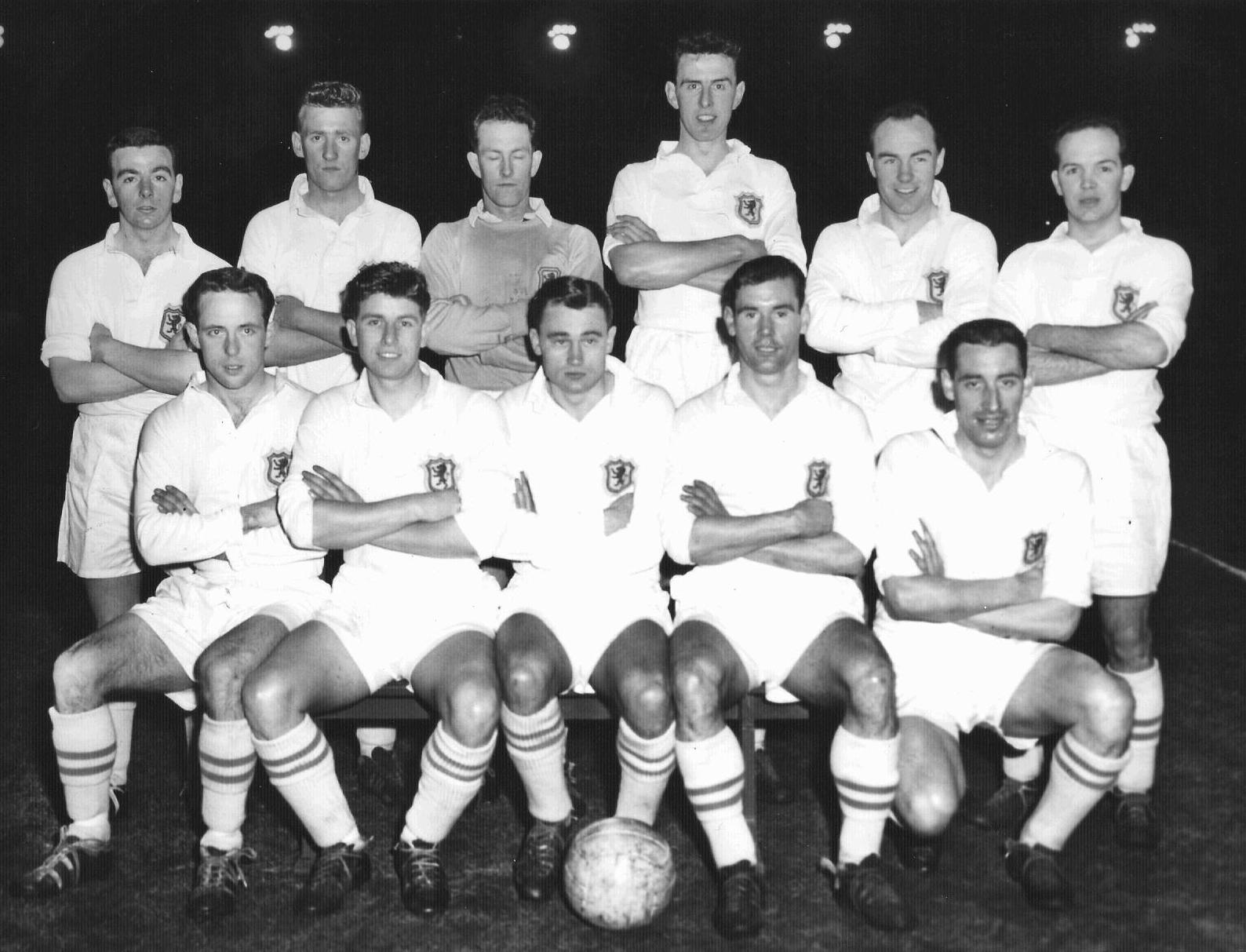 Scotland played International Football at under-23 level, mainly friendlies against England and Wales, from 1955 until 1975. It was felt that there was a need to bridge the gap between Youth Internationals and Full Internationals, although Scotland did award full caps to players who were aged 23 and under. Denis Law still holds the record for the youngest ever player to win a full cap at the age of 18 years and 236 days. Willie Henderson and Kieran Tierney were also aged 18 when they made their International debuts. Falkirk’s Alex Parker was 19 when he played against Portugal in May 1955.

The list of Under-23 caps includes several Falkirk players, notably Alex Parker, Ian Rae, Jimmy McIntosh, Bert Slater, Eddie O’Hara, and Stuart Kennedy. John White was capped while possibly still a Bairn, although some books list Spurs as his team when he played against Wales in 1960. There are many other players who later played for Falkirk who represented Scotland at Under 23 level. These include Willie Allan, Doug Baillie, John Baxter, George Burley, George Connelly, Alan Cousin, Ally Donaldson, Jimmy Harrower, Tommy McMillan, Ian Mitchell, Billy Price and Alex Scott. Bobby Robinson won his Under 23 cap after leaving Brockville.

The Scotland selectors often held trial matches for the Under-23 team and played against club sides or select sides to enable them to see potential prospects in action. Falkirk players were involved in some of these games. The first Under-23 game saw Scotland end up being thrashed 6-0 at Shawfield by England in February 1955 and the selectors were determined to get some more practice in before the second game at Hillsborough in the following February. In that inaugural match, Alex Parker had played at right back and a crowd of 17,000 saw a devastating display by the young England team, especially a young Duncan Edwards of Manchester United who was simply unplayable. Club sides were chosen as the opposition and Scotland Under-23 hopefuls faced Clyde at Shawfield on December 14th, 1955. The young Scots were in great form and beat Clyde 5-1 on their own patch. Alex Parker and Ian Rae formed the full-back partnership and gave a good account of themselves. The second warm-up game on January 11th, 1956 at Easter Road on a treacherous surface and the Hibs side were 3-0 at halftime, winning comfortable 4-1 in the end. Alex Parker was again at right back for the Scots. Hibs were a great side at the time, and even had the luxury of having two of their players- Thomson and Plenderleith- playing for the Under 23s.

The selectors felt the team was ready for the return leg in Sheffield and this time, there were three Falkirk players in the Scotland side- Alex Parker, Ian Rae, and Jimmy McIntosh. Scotland played much better, although losing 3-1 and the attendance was an amazing 39,736. Scotland were unluck and all three Bairns did well against very strong opposition. The trial matches against club sides seemed to have been helpful and the experiment was repeated before the English were due back at Ibrox in February 1957. The game against Rangers would also help familiarise players with the surrounds and an entertaining 3-3 draw was played out on January 23rd, 1957. Alex Parker was in his usual right back slot and Eddie O’Hara lined up at outside left. The Falkirk winger shone against a strong Ibrox outfit who included former Bairn Bobby Morrison at inside right.  Both teams did well on a pitch that was barely playable after torrential rain. 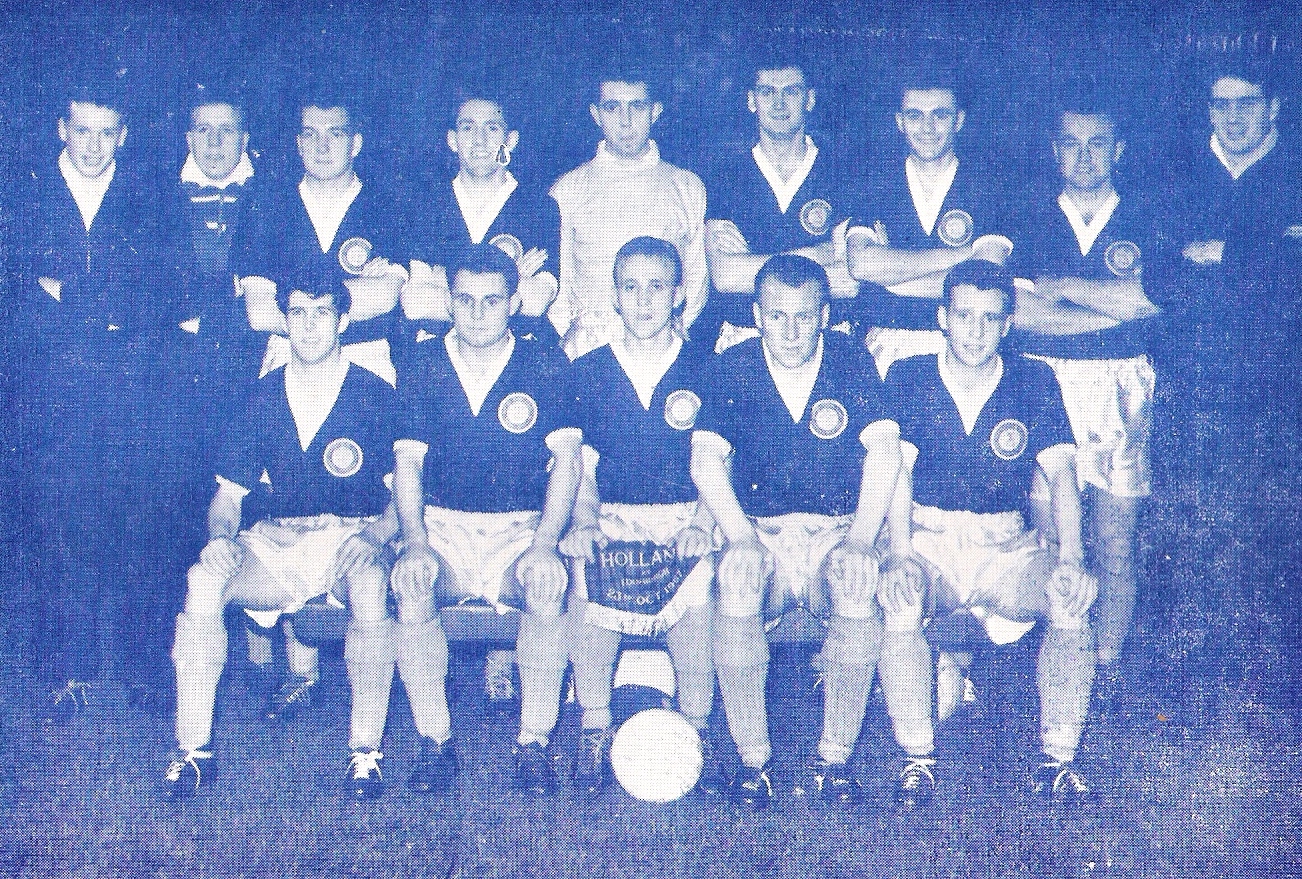 Alex Parker held his place for the visit of the English and this time Scotland seemed to have closed the gap in class, earning a creditable 1-1 draw. Falkirk again provided three representatives for that year’s game against Holland at Tynecastle. Alex Parker and Jimmy McIntosh were at full-back with Eddie O’Hara at outside left. Scotland won 4-1 and the side included players who were to come to Brockville later in their career- Billy Price and Jimmy Harrower. The Parker-McIntosh partnership was retained for the next game against England at Goodison in February 1958 and Eddie O’Hara was again wearing the No.11 jersey.

Brockville Park was the venue for two further trial matches, this time against Second Division Select sides. Falkirk at the time were a Second Division side, and had struggled since relegation, especially under the disastrous management of the former Scotland keeper Tommy Younger.

The first match took place on Monday April 11th, 1960 and Scottish selectors were looking at possible players for a Summer Tour of Austria, Hungary, and Turkey. Before the game, Scotland suffered from three significant withdrawals- Alex Scott, Alex Young and Andy Weir. Nevertheless, they fielded a strong side, including two future Bairns- Jim Pierson and Alan Cousin. The Second Division Select included Falkirk’s Ian Rae, Jim Oliver, and Dougie Moran. Tommy Bryceland of St. Mirren opened the scoring after five minutes, but Dougie Moran equalised after a quarter of an hour. Alan Cousin and Tommy Bryceland added two goals in the second half. The final score of 3-1 in Scotland’s favour, although Gibby Ormond had a chance to narrow the gap with a penalty ten minutes before the final whistle. It wasn’t a great game, but Jim Cruickshank of Queens Park was an outstanding prospect in the Select side’s goals and looked certain to add to his International honours, already gained at Amateur level. Ian St. John and Billy McNeill were the best players for Scotland.  The teams lined up as follows:

The second Brockville game was held on January 18th, 1961, having been postponed from the previous week. This time, the gulf in class was more obvious and the Scotland side ran out 10-2 winners. Jim Pearson, Dougie Moran, and Alex Duchart were the Bairns in the select side. The half-time score was 3-1 in favour of the national side with goals coming from Hilley, McLeod and St. John. Robertson of Cowdenbeath scored the Select’s goal. The damage was done with a devastating six-goal blitz in a 25-minute spell after the break which left the select side completely crestfallen. The crowd saw promising displays from the impressive Frank McLintock of Leicester City and some lethal finishing from Third Lanark’s Dave Hilley. The Scotland second-half goals came from Hilley (3), Gilzean (2), St. John and captain Billy McNeill added a penalty. Dougie Moran scored a goal for the select side five minutes before the final whistle. The teams lined up as follows:

Brockville Park staged the Scotland v Romania Under 23 match in the 1975/76 European Championships. The Scots were in great form and were to win their group to qualify for the finals. Stuart Kennedy was on the bench but didn’t come on despite the pleas of the Falkirk fans in the 8,000 crowd. The national side had a strong line-up and featured several players who went on to play for the full International side.

It was the first time Scotland had entered the UEFA competition for under-23 national teams in 1975–76 and reached the quarter-finals, but were eliminated after a penalty shoot-out by Holland.

The Under 23 games used to attract good crowds, something the Under 21 games haven’t managed to do since. Many felt the gulf between Under 23 and the full squad was easier to bridge than the Under 21 to Full International is. While there will always be certain talented individuals below the 23 year- old limit, they have learned the game playing first team football against men. The current Under 21 cut off has failed to grasp the imagination, and despite some good runs in the European Tournaments, Scotland remains a long way short of seeing big crowds coming out to watch the best young talent on view. The final Under 23 game was played at Easter Road on March 24th against Holland, with the Dutch winning on penalties after extra time. The crowd? 32,593.