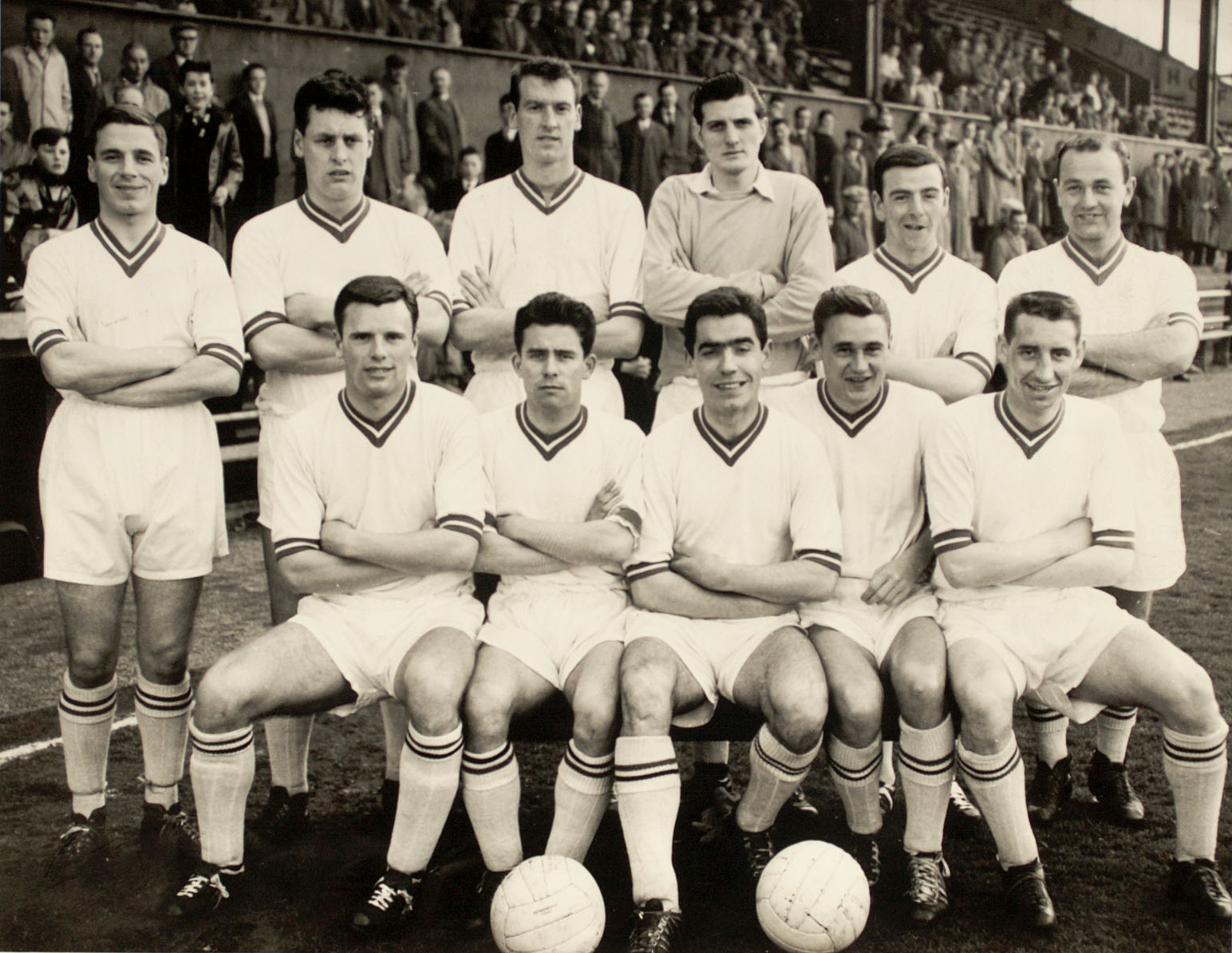 In normal times, every Friday afternoon a group of guys gather at the right-hand side of the bar in The Wheatsheaf in Baxter’s Wynd. The topics of conversation invariably centre on Football and there is a fair amount of knowledge and experience in the group. The group start their gatherings with a debate about the identity of the Mystery Player in The Benchman column in that week’s Falkirk Herald. The debate can get very heated. To older Falkirk fans of a certain vintage, they would be recognisable straight away. All played for Falkirk and all have a fund of stories to tell. They have been friends for years, but that doesn’t prevent plenty of argument, debate, and heated discussion, especially when comparing and contrasting the footballers and games of today with those of their days as players. Today’s article throws the spotlight on one of the trio, a player who is universally known as “The Duke” – Alex Duchart. His knowledge of the game in the 50s and 60s is amazing and the personal anecdotes could fill several volumes of interesting reading. He was a friend of many of the big names from the Golden Age of Scottish Football and is still well thought of by those he played with – and against. Yet the same Alex didn’t want to be a footballer at all – his main ambition was to become an Ice Hockey player.

As a boy, Alex and his pals used to kick about in Victoria Park and as many did at the time, used to sneak in at Firs Park to see The Shire when they played in the old Division C. He recalls being dragooned into playing for the club as a young boy when they were short of players for a game and reckons he would have been about 14 at the time. He impressed in local Schools and Juvenile football and played for the impressive Petershill side as a Junior. Several clubs were after his signature, including Rangers and he recalls being ushered up the marble staircase to meet the legendary Bill Struth. It was awe-inspiring, but the Ibrox boss was very keen that Alex didn’t speak to any of the several reporters and photographers assembled outside. Being Rangers, there was no discussion of wages, as the manager believed that signing alone would be a privilege for any young player.  At the eleventh hour, an approach was made by Hibs manager Hugh Shaw, and a taxi took him through to Easter Road where he duly signed on for the Edinburgh side in 1953. At the time, Hibs were a major force in Scottish and British Football and of course had the Famous Five forward line of Smith, Johnstone, Reilly, Turnbull, and Ormond. The wages on offer at Hibs far exceeded anything his pals were earning at Brockville and elsewhere. Alex’s dad had advised him not to sign for Falkirk, as he felt local boys were given a tougher time by the Brockville crowd, and of course their every move would be tracked and reported on by locals keen to obtain stories about footballers, even in these pre-social media days.

Ironically, Alex made his Hibs debut at outside left against Falkirk at Brockville on October 17th, 1953, aged 20 in a 4-2 win for the Edinburgh side. A crowd of 16,000 saw an entertaining game, with Lawrie Reilly scoring a hat-trick in his first game of the season, Eddie Turnbull scored the other Hibs goal, while The Bairns goals came from Willie Sinclair and Davie Campbell. Alex is one of the few footballers who can say that he played with four of the Famous Five at their peak.

Opportunities at Easter Road were few and far between and Willie Ormond didn’t miss too many games. He certainly learned the trade at Easter Road and gained valuable experience in the Reserve side with occasional appearances in the “big team”. To further develop his playing career, Hibs agreed to a loan transfer to Third Lanark in 1955. He was highly thought of at Cathkin,scoring six goals in his 19 league appearances but, in hindsight, could see the roots of the eventual demise of the Glasgow club. The future chairman Bob Hiddleston was to lead the club into oblivion, but the danger signals were already there. At the end of the loan spell, and with first team opportunities with Hibs restricted, Alex moved to Rootes Hall and signed for Southend United. While the financial rewards in English Football were impressive, Alex was keen to return to Scotland where he signed for East Fife under Jerry Dawson- a familiar face well known to Alex. At Bayview, Alex hit a great run of form and his record of 33 goals from 59 games soon attracted other offers from clubs.

Manager Peter McGown secured his transfer in June 1959 and he made his debut for The Sons on August 8th, 1959 in a League Cup game at Gayfield. He continued his impressive ratio of goals per game and in his two seasons at Boghead he hit 26 goals from 63 appearances. Some familiar faces played with Dumbarton at the time, including John Prentice and Alex was instrumental in persuading the manager to sign Gordon Black who was without a club at the time.

It seemed only a matter of time before Alex arrived at Brockville Park and that was to be his next port of call. Falkirk had been struggling in the old Second Division and took a while to recover from the disastrous management regime  of Tommy Younger. Alex certainly knew the Division and he contributed seven goals as Falkirk finished in second place and gain promotion. There were some real characters at the club at the time, including two of his current  Wheatsheaf companions- Ian Hunter and Roy Kemp. Life-long friendships were formed and maintained. The stories of Willie, Big Tam , Buck, Tosh, Wee Sammy, Peerie and Bainy can entertain a crowd for ages and his insight on these days is fascinating. Auld Ernie’s treatment table features highly in the stories and The Bunts is always teased as to the amount of training time he missed due to “injuries”. The club was well  run by manager Alex McCrae, and a few others- none of the army of staff currently employed at football clubs these days. Ernie was an early example of multi-tasking. One of his skills was reporting on the weather. A snow-clad Falkirk meant that training would be impossible, and the players were ready to go their own ways, when Ernie stated that there was no snow up in Slamannan where he lived.  The players were then ordered to run up to Slamannan and enjoy a snow-free session. Alex’s time at Brockville was marred by injuries that required surgery, but he had a great season in 1961/62 when he finished as top scorer with 10 goals from 24 games. He could write a book about the infamous 9-1 defeat at Fir Park in a League Cup tie, especially the story of Jimmy Adam’s attempt to break the silence in a demoralised Bairns’ dressing-room. Players were hurting and the silence was eerie. “Well, I thought we looked smart in these new strips”, stated the player. You can imagine the reaction. 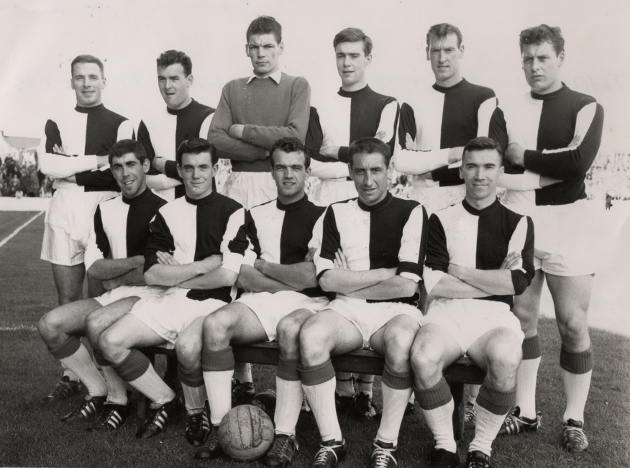 Alex’s later career took him back to England to play for non-league Yiewsley,  before coming back to finish off his career in the Highland League with Inverness Caledonian. Again, there was always a Falkirk connection and he met up  with his great friend Jim McIntosh who was then manager of Forres Mechanics. The Duchart-McIntosh double act was the stuff of legend and puts other screen duos to shame. Lewis and Martin, Abbott and Costello, Morecambe and Wise, Little and Large- had nothing on these two and I still break into a smile as I remember some of the stories they have shared over the years. Football is the word that runs through Alex’s life like the lettering in a stick of rock, and even his National Service was all about the game. As soon as the new RAF recruit was discovered to be a footballer, Rangers Johnny Hubbard got him involved as a player and organiser of the station team.

It is strange to  think that the young Alex Duchart wanted to be an Ice Hockey star with the Falkirk Lions instead of a football player. He wouldn’t have met all these great characters, wouldn’t have had so many tales to tell, and wouldn’t have been part of the Wheatsheaf Gang on a Friday afternoon. More importantly, he would not have been such a valuable member of the Football Memories Project support team where he helps so many people who are struggling with their memories and who love to hear his stories of The Good Old Days.