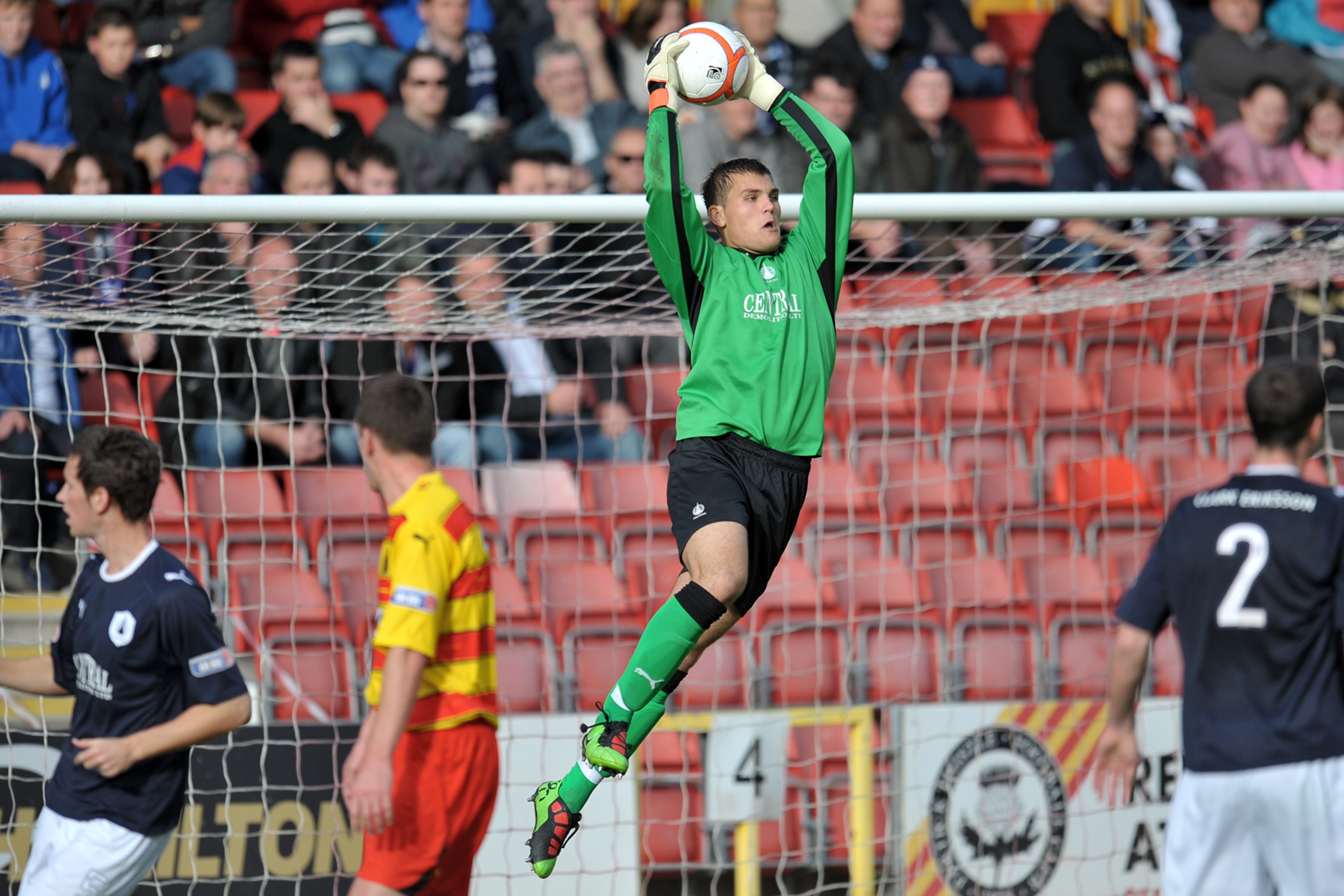 Over the years, Falkirk have had several successful goalkeepers. One player in particular who joined the Bairns midway through their last stint in the Premiership, and helped them through two more top flight campaigns, was Austrian goalkeeper, Bobby Olejnik.

Robert made the move from Austria to the UK aged just 17. Having played at under-14s and under-15s level for his country and being part of Austria Wien’s youth set-up, he was in a position to be noticed by scouts from big clubs however, his route to the UK was quite an unorthodox one.

“Coming to the UK was a bit strange to be honest with you. When you play under-14s/15s level with your country there are always scouts talking to you, especially if you have a successful youth set-up like we had in Austria. One day I started speaking to an agent and for a while he was saying “Aston Villa are interested in you”, but nothing really happened, so one day my dad said to me, ‘look, he’s not been that good, why don’t you pick up the phone and call Aston Villa yourself’ and they told me to come over. As strange as it sounds, that path led me to the UK.”

To those over here at the time, a 17-year-old making a call to Aston Villa himself would have been seen as a bold move but to Bobby and the other players at his level in Austria, the size of the clubs in the UK was unknown to them.

“The clubs are so much smaller in Austria than they are in the UK and we thought there would just be one person dealing with all of that, but when you come over you see the magnitude of some of the clubs and I didn’t realise what was there. If I’d have known I wouldn’t have phoned, I would’ve thought they were too big.

“Everyone in Austria wants to play in the UK and I thought there must be something to it if the agent kept saying it. I think as an agent you’d lose credibility quite quickly if you don’t deliver, so I thought ‘what have I got to lose, I might as well phone up.’”

They say there’s no smoke without fire, and this may certainly have been the case with Aston Villa’s interest in Robert. Phoning Aston Villa earned him a trip across to England to see what they were all about, and it was a move that would kick start his professional career.

“I spent four years at Aston Villa. What they used to do was sign players from abroad on two year contracts for the youth team and then offer them a pro contract, just to give them a chance to develop and get used to the facilities.”

After four years at Villa Park, Bobby was released by then manager Martin O’Neill. Word had reached Bobby of a certain Danish keeper who was plying his trade at Falkirk at the time who Bobby’s goalkeeper coach had known about for a while. This got him interested in what Scotland had to offer.

“I knew about Kasper Schmeichel and my goalkeeping coach had known about Kasper for a while so when I saw he was playing in Scotland it really interested me. My agent rang me one day and asked if I wanted to go and spend a week up there to see what the facilities are like and familiarise myself with Falkirk because they’d be interested. After having heard that Kasper was there I thought ‘he’s obviously a quality goalkeeper so it must be a great place to be,’ so I decided to go up and a few weeks later I signed.”

The facilities at Falkirk impressed Robert straight away and turned out to be one of the key factors in him deciding to sign for the Bairns.

“The facilities were on par with the ones at Aston Villa, if not better. When I was at Aston Villa they still had their old training ground, which, along with their gym, was nowhere near what we had at Falkirk because we had access to Stirling University’s facilities; their training pitches, running track, changing rooms, everything was just there and it was an incredible experience.

“I’ve been at places where the facilities weren’t as good and that’s one of the key thinks I think when you sign as a player, you want decent training facilities because that’s where you spend five days of the week and you don’t want to be coming in and resenting where you are. But our facilities were incredible and the fact we were able to work with Stirling University at the time just made it so much easier to get better as a player.”

Like many of the other former players who have talked to us about their time at Falkirk, Bobby has countless happy memories of his time at the Falkirk Stadium and remembers the whole experience, including the fans, fondly.

“It’s only when you look back you realise how much you’ve gone through. The obvious memories that stand out are playing at Celtic and Rangers, being in a cup final, avoiding relegation on the last day of the season, there were so many different experiences that helped me as a player. Just being in a professional environment, having the chance to win cup competitions, playing in Europe, I could probably spend hours talking about all those things because there were so many good memories and so many amazing players I played with as well.

“I really enjoyed playing there. The fans were always there, they were always supportive, it was a nice little community and you could talk to fans after the game. Even if you’d had a bad game they wouldn’t shout abuse, they’d always have a chat and they’d always be friendly. Yes, they were sometimes unhappy but that’s expected and it shows the quality we had. If we weren’t right up there and we were fighting relegation it shows the expectations they had.

“I always had a good time, they were always there for every away trip. I remember that day when we stayed up and it was such a great atmosphere. I think Gordon Whyte put up pictures of us celebrating that day and you can see the joy in the fans’ faces.”

Bobby sees his years at Falkirk as the ones that paved the way for such a fulfilling career and ones that helped shape him into the footballer he developed into.

“My years at Falkirk were the ones that set me up to have an enjoyable career, and a relatively successful one, because of the experiences that I’ve had, because of the training facilities and I think that’s the main reason why I’ve played football for as long as I have. If I didn’t enjoy it so much I don’t think I would have lasted as long in football to be honest.

“You look at some of the players that have left Falkirk and where they’ve gone to play, Scott Arfield, players like that, they’ve had incredible careers. We all played in the same team and it shows what a good time we had, and what a good team we had.”

One think that the Austrian liked so much about playing with Falkirk was how young the squad was overall. Robert feels that being part of such a young squad helped his development and gave him, and others, a platform to improve as players.

“That was one of the things that I noticed straight away when I signed, how young the squad was. We had such a young team at the time with some experienced players dotted about the place. Most of the players being young really helps when you’re coming through as a player because you’ve got that freedom to make mistakes and to learn and gain experience. I think it’s good to come in as a young player and know that you’re going to develop, and I’m thinking back to some of the other young players around me like Tam Scobbie, Scott Arfield, and Lyle Taylor, who have had successful careers.”

And part of what made that team of youngsters successful was the bond they shared in the dressing room, something that most former players have recalled from their time in the navy blue, and something that will always continue to be there at Falkirk.

“I think it’s one of the key things for a successful team. You can have good individual players, but if the dressing room’s not right then you’re just not going to have a successful season. Because we worked together, because the players lived quite close together, so as much as you’re spending a lot of time in the dressing room, players then go and hang out for a coffee afterwards instead of just going home and not speaking till the next day. It’s probably one of the reasons why we stayed up. If you look at that season, at the end, everyone was celebrating together, there were no individuals. Looking back at pictures, they really show that, that we had a good dressing room.”

But out of all the wonderful memories Bobby has of his time at Falkirk, the one that stands out most for him was the experience of playing in a European competition for the first time.

“It’s got to be the experience of playing in Europe. You can play all the domestic cups, but once you’ve played in Europe it’s a completely different set-up. There’s a whole new thought process and preparation and everything that goes into it. You can’t compare it to domestic football, having played in the qualifying rounds of European football was an incredible experience.”

Even though he left Falkirk eight years ago, Bobby still likes to see how Falkirk are doing.

“I still look at the scores, I’ve always checked. On a Saturday at five o’clock I’m always checking to see who scored, how my mates got on. I’ve just got really good memories of being there, and I like to look back on them, those memories will always put a smile on my face.”