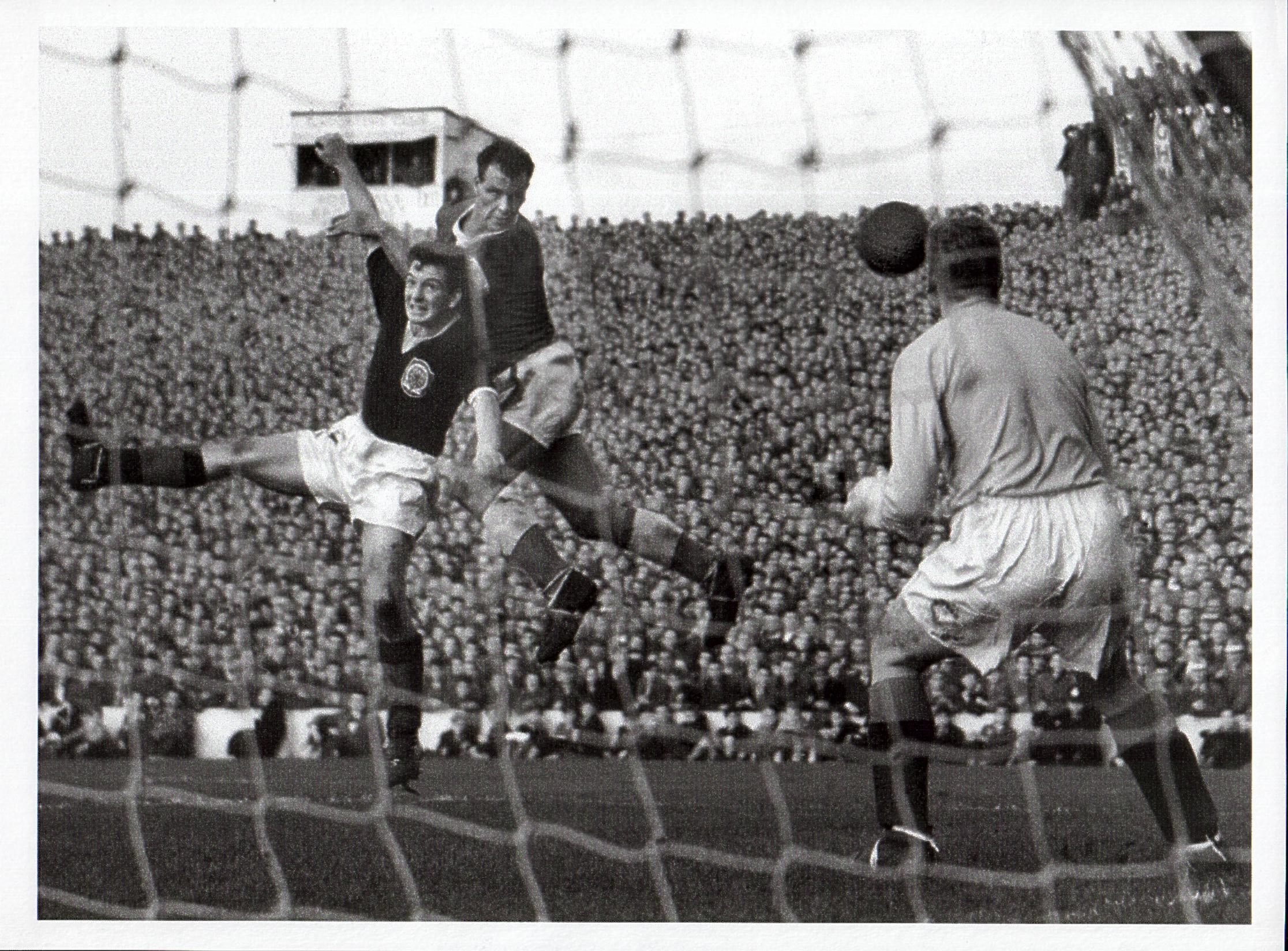 Alex Parker was, and still is, the hero of many Falkirk fans. That he found a place in the Hall of Fame at Falkirk and Everton says it all. He was quite simply a class act. He was signed from Dumfriesshire Junior side Kello Rovers as an inside right in season 1951/52 and made his Falkirk first team debut at Brockville against East Fife on September 27th 1952, wearing the No.8 shirt. He played three games that season, all of them at inside forward.

Young Parker was not an instant success, and manager Bob Shankly tried him in a variety of positions. In November 1953, at Palmerston, he scored twice in a 5-3 defeat, but his career was stalling. He recalls the early days at Falkirk, and of a time staying with the Shankly family in Kincardine.

“Mrs. Shankly was keen that I got an education and kept giving me books. I wasn’t really interested, and one day, she took me out into the garden for a game of headers. Any heading ability I had in football was gained by learning from Mrs. Shankly.”

The early years at Brockville were not easy, and he had genuine worries that his professional career might be short-lived. He was moved back from attack to the half-back line and his games at right half were not entirely convincing. After an emergency call-up he was tried at right back and found his best position. He joked later that if he had been played any further back, he would have been on the terraces. The rest, as they say, is history. He went on to make the position his own and represented his country at right-back on no fewer than 15 occasions, all but one of the caps was won as a Falkirk player. Alex himself disputed the fact that he was listed as Alex Parker (Everton) for that last game as he hadn’t kicked a ball for the Goodison side and was still on National Service in Cyprus. He felt he was still a Falkirk player at the World Cup Finals in Sweden in 1958.He remains our most-capped Scotland player, and was very much the first of the attacking full-backs. The influence of trainer Jimmy McPhie is obvious, as the development of this raw, untried inside forward into an International class full back was no accident.

He won 8 Scottish League caps and 6 Under-23 caps while he was a Falkirk player, and earned rave reviews for his consistent displays. He was awarded the prestigious Scottish Player of the Year Award for 1957, and the event was captured for posterity on Pathe Newsreel. His first cap came when he was only 19 years old, and the reports of the game mention the “gentle” supervision by George Young of the Falkirk debutant. Parker recalls it differently.

“Supervision? He was screaming blue murder at me to get back and cover my winger!” His games for Scotland and the British Army saw him come up against some of the best wingers in the world. There was no hesitation when he was asked who he thought was the best he had ever played against. Tom Finney of Preston North End and England.

“I played against him twice, both times at Hampden and he destroyed me.Still, if someone was going to make me look foolish, I’m glad it was a player as talented as Finney. He did things with the ball that I didn’t think possible, and his amazing sense of balance made my encounters with him truly memorable.” He recalled a game at Hampden against Queens Park only a matter of 48 hours after the encounter against the Auld Enemy.

“”The attendance that Monday night was only about 1,000 and I can still hear some Glasgow wag shouting-“Here’s Finney!” every time I went near the ball.” Alex was invited to play in Tom Finney’s Testimonial game at Deepdale and the Invitation XI read like a Who’s Who of British Football. He was in great company that night. “I didn’t recognise Tom from the front, as I usually only saw his back and a number 11 disappearing towards goal with me left floundering.”

Alex had some fierce competition for the Scotland full back slot, notably from Eric Caldow of Rangers, but the two did play together in the national side. Alex. Made 151 appearances for Falkirk, before the inevitable arrival of scouts from the big English clubs. He signed for Everton at the end of season 1957/58 for a fee of £18,000 and made his final appearance for Scotland against Paraguay in the 1958 World Cup Finals. Although technically an Evertonian, Alex. considers he was still a Bairn when he played. It wasn’t his greatest game, and it heralded the end of his career in the navy blue of Scotland. He remembers watching the great sides in the tournament and realising that Scotland had a lot to learn. As an Everton player, he won a League Winners medal in 1963, and is highly thought of on Merseyside. He is a member of the Goodison Hall of Fame, and played for the Merseysiders from 1958 until September 1965, when he joined Southport. He was coming to the end of his playing career when he accepted the role of player-manager with Ballymena United in Northern Ireland. His final playing assignment came in a spell with Drumcondra. He returned to Southport as trainer/coach before becoming their manager in May 1970. “I vowed that if I could not be a successful manager I would not stay in the game. I took Southport to eighth place in the league, but it wasn’t good enough for my directors, who wanted in the top four and I left.”

In later life, he became a successful publican, in Runcorn, Gretna and Carlisle, and he was a regular visitor to Falkirk games, when the team were in the South West. It is only fitting that Falkirk fans voted him into the Millennium Team, even although many had never seen him play. In accepting his award, he displayed typical Parker modesty, thanking all the grandfathers who had told their children about him. Modesty was one of his endearing characteristics, and he never failed to amaze with his genuine humility. “Whenever I start to talk about my career after watching a match on TV, my wife Irene, who is a former Irish Hockey internationalist, can always bring me back down to earth. She just has to say- Alex, I’ve more full caps than you (21)- and I’ve played at Wembley.”

He had a droll sense of humour, and did a good double act with Bert Slater, as he described him-“the best keeper I ever played behind.” Parker was renowned for his goal-line clearances and was often photographed rescuing club or country with a last-ditch kick off the line. He chose Bert Slater as the best Falkirk player of his time, and the two played together with the British Army as well. “ Bert was brilliant. Many times, I thought a goal was certain but somehow Bert would leap across and tip the ball away. As far as I’m concerned, he’s the best keeper I ever played with or against.”

He picked the famous 4-4 draw at Brockville against a Scotland XI as the most exciting of his career. “I can still feel soaked right through just thinking about it. I’m sure the fans who packed the ground that night will know how I feel. We were 4-1 down at one stage and after I scored from the spot, we fought back to 4-4 with the Scottish team hanging on the ropes. Big Bobby Morrison covered miles that night and played a great part in giving us the draw against a side that was being groomed to meet Hungary at Hampden.”

The memories of 1957 were powerful ones and he recalled the amazing escape from relegation and the cup final win against favourites Kilmarnock. “I thought referee Jack Mowat was never going to blow for full-time after Dougie Moran popped in the winner in extra time. Here we were in danger of being relegated, only minutes away from winning the Scottish Cup. Believe me, it was nerve-wracking.”

There was little time for enjoying the celebrations tough, as he had to be back on the parade ground at 7.00 a.m. on the following morning. He delighted in showing his sergeant major, who was an avid Celtic fan, his winner’s medal. One of the Falkirk supporters had given Alex a loan of his car to get back from Falkirk’s celebrations in the Ice Rink to his army barracks, even though Alex couldn’t drive at the time.

Why Alex Parker didn’t win more Scotland caps after 1958 remains a mystery, as he was the outstanding right back of his era, captaining Everton’s star-studded team and turning in great performances for his club. Others were capped for Scotland who were nowhere near his ability and class.

Of all the Falkirk players I have seen, Alex Parker is the greatest. His record is unparalleled in the history of our club, and he represented us well on the national stage. That night in the Regal cinema will take some beating for pride in your club. Alex Parker, Scotland’s Player of the Year. Alex Parker – of Falkirk and Scotland.