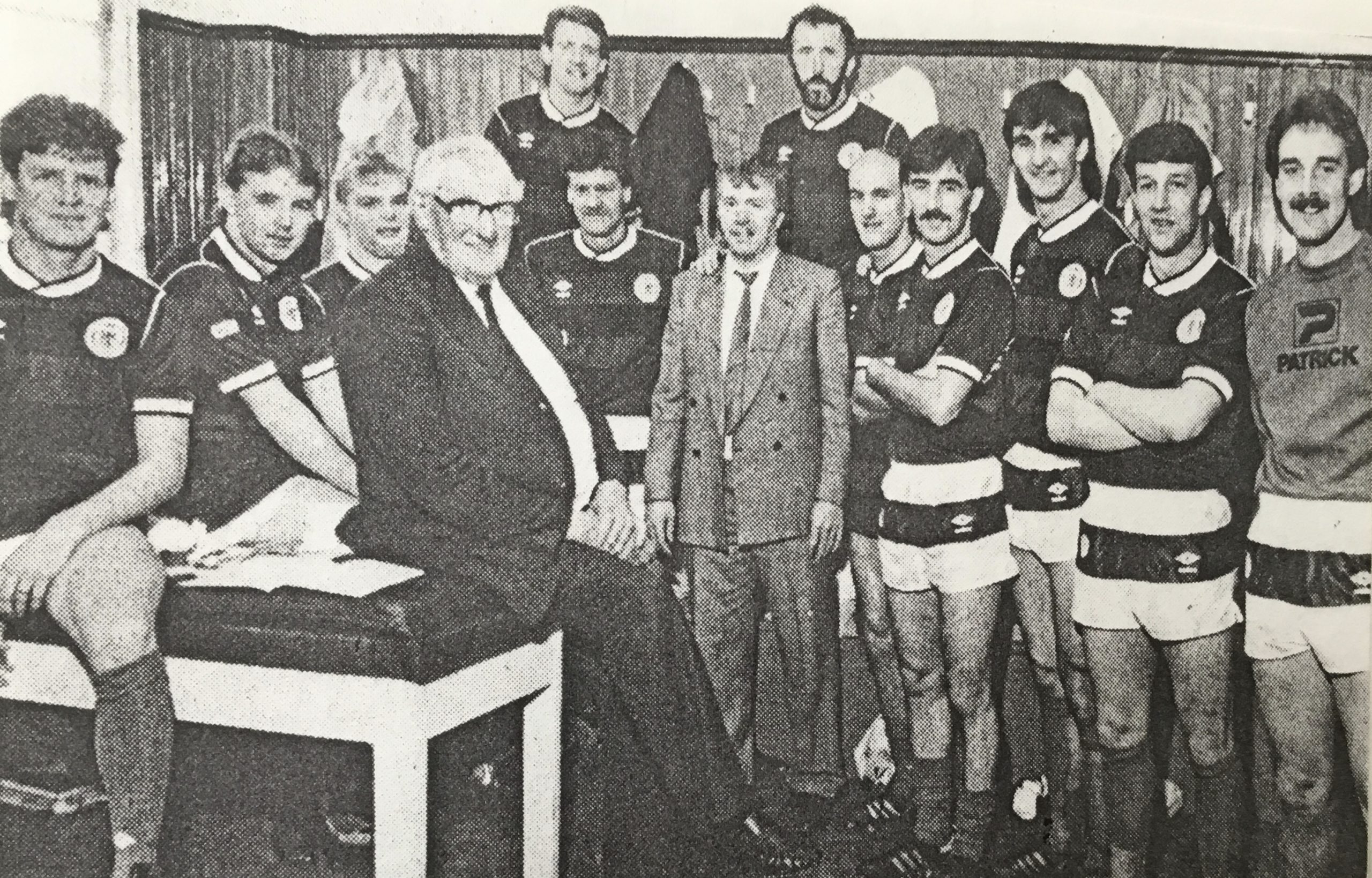 George Young was in the eyes of many older supporters the best- ever Rangers player and Scotland captain. Why then did it take former England manager Don Revie to organise a Testimonial Match for George at Brockville?

The amazing story starts in Grangemouth in the 1940s. George went to Dundas School and the local legend is that he could head a tennis ball the length of the school playground. Having attended the school myself, I can vouch for the fact that it was quite a feat. George was quite a star in the Dundas team and aged only 9, he was played at outside right. His performances soon earned him wider recognition and by the time he was 14, he was developing rapidly and became an automatic choice at left-back for the Falkirk and District Schools team. In season 1937/37, he won three Schoolboy caps against England, Ireland and Wales and was again outstanding. It was a local man, the Old Town blacksmith Tom Robertson, who had seen the potential in George and realised the ability of such a versatile two-footed defender and informed Rangers of the rising star in the town. George’s dad was a goods guard based at Fouldubs Junction and Tom arranged for the pair to go through to Ibrox and meet the famous Mr Struth. George recalled the day, “I recall that nobody could sign professional forms unless they were 17. My dad and Mr Struth talked a little then I signed. The paperwork went straight into Mr Struth’s office safe.”

George was one of four Grangemouth players to sign for Rangers that season.” Jimmy Kennedy, John Galloway, Jimmy Fiddes, and I made up the quartet from the town. I was very proud that I was their youngest signing that season.” George left school and worked for a short while in Brownlees sawmill and then took up the offer of an engineering apprenticeship with the Grangemouth Dockyard. He played Junior Football with Grange Rovers and trained at Brockville when ex-Ranger Tully Craig was the manager. It was not uncommon for players from other clubs to use the facilities on offer at their local clubs and George was quick to acknowledge the help and advice he received in those days at Brockville.” Training nights with Falkirk brought me into contact with great players like Charlie Napier, Golden Miller, Jerry Dawson, Archie Miller, and Kenny Dawson. It was in 1941 that George was called back to Ibrox to sign professional forms and was offered a contract which paid him £2 per game he played. Still only aged 19, he soon established himself in a star-studded Rangers side and he was more than able to hold his place alongside the likes of Jerry Dawson, Scott Symon, Tiger Shaw, Sammy Cox, Willie Waddell and the other Ibrox greats. He played in Wartime International games against England, but his first International experiences could have put him off. England won 4-0 at Hampden and 8-0 at Maine Road, Manchester. At Manchester he faced the formidable Tommy Lawton and admitted that he was the hardest opponent he had faced so far.

By 1948, George was the captain of Scotland- an honour he held until he retired in 1957. He had led his country before he became club captain with Rangers. That honour was given to him in 1950 and he regarded this as the highlight of his career, a great honour which made him feel incredibly proud. Players recalled how George acted as manager and coach as well as captain of Scotland. After the selection committee had wished the team all the best, George would lock the door and star his team talks. It was inspirational and he asked his playing colleagues for their input too.  Alex Parker and Lawrie Reilly are just two former International colleagues who spoke highly of his influence as player and captain.

His career statistics cannot do justice to a remarkable player. 768 league appearances for Rangers, 6 League winners medals,4 Scottish Cup winners’ medals, 2 League Cup winners medals and 53 Scotland caps, 48 of them as captain. He was a Rangers Icon, turning down offers from Scottish and English clubs to stay with Rangers. He was highly respected by his opponents too. Tom Finney described as being like a giant octopus. ”You would beat him seven times in one move, and though you were past him, then that eighth leg would come out to reclaim the ball.” Stanley Matthews too, rated him highly. How then did Brockville stage this Testimonial Match for a Rangers and Scotland Legend?

Rangers refused to stage the game because they thought it would create a precedent to honour FORMER players. It had been hoped that Rangers would play a London Select to honour George, but while the chairman John Paton was reportedly sympathetic, the other directors refused permission. It fell to Don Revie, who had become a personal friend, to head the testimonial committee, which included Sir Hugh Fraser and the Reverend James Currie. Retrospective Testimonials were new in Scotland, but not uncommon in England where players like Wilf Mannion and Tommy Lawton had been honoured several years after retiring. George had fallen on hard times and at that time lived in a two-bedroom council house in Grangemouth, was suffering from poor health and was on unemployment benefits. He had several business ventures which had ended badly, notably the Tillietudlum Hotel, a Glasgow coffee bar, and a double- glazing company. George was perhaps too much of a nice bloke, too trusting and as his wife Zena once said, “too much of a soft touch.”

Brockville was the place for autograph hunters when an array of stars played in this special match to honour the career of Rangers and Scotland legend George Young. Lawrie McMenemy was a special guest and he brought several of his Sunderland first team squad up to Falkirk as well as Joe Jordan from Southampton. Kevin Keegan, then living in Spain, came out of retirement to play in the match. The home side played in a Scotland kit and were too strong for the Revie side, who contained a few veterans. Respect was due to Kevin Keegan who had undergone knee surgery only seven weeks previously and hadn’t played competitive football for over a year. He played for the full 90 minutes and showed that he hadn’t lost any of his old enthusiasm for the game.

The George Young team were two goals ahead within the opening twenty minutes through BRIAN McCLAIR and STEVE COWAN. McClair’s goal came after a great pass from Robert Connor of Dundee, while Cowan was first to react after a McClair drive came back off a post. The “home” side were well on top and it was no surprise when BRIAN McCLAIR added a third goal just before half-time.

BRIAN McCLAIR completed the scoring late in the second half when he fired home from a difficult angle for the best goal of the game. George Watson had a good game in goals and made some difficult saves, the best of which was from a Keegan penalty with the score at 3-0. Alan Irvine came on in the second half and looked comfortable in such exalted company. He made one characteristic surging run which almost ended in a goal and it raised the biggest cheer of the day.

One of the most unusual sights of the day was Brian Kemp of Falkirk coming on as a substitute for Ian Wallace in the second half- and in an England top. He almost got on the scoresheet when he headed a cross from Joe Jordan over the bar with keeper Duncan helpless. It was quite a day and the money raised would be added to that gathered at a Testimonial Dinner where Jackie Charlton had been the star attraction.

George Young was a real legend of the game and it was quite sad to see him in his later years. His playing career was almost unrivalled, and he well deserves his place in the Scottish Football Hall of Fame. His modesty was best summed up with a quote from 1986.” I turned them all down and it didn’t take me long to say no. Glasgow Rangers was always going to be the only club for me. I am just so grateful that I had the chance to be part of them.” The Rangers refusal to sanction his Testimonial obviously hurt him, but he took it in his stride.” They have changed the stands at Ibrox, and they have changed the faces there, too. In my career, I won some, and I lost some. It looks like I have lost this one.” It was a sad chapter in the club’s history and many Rangers fans were angry and embarrassed at the refusal.