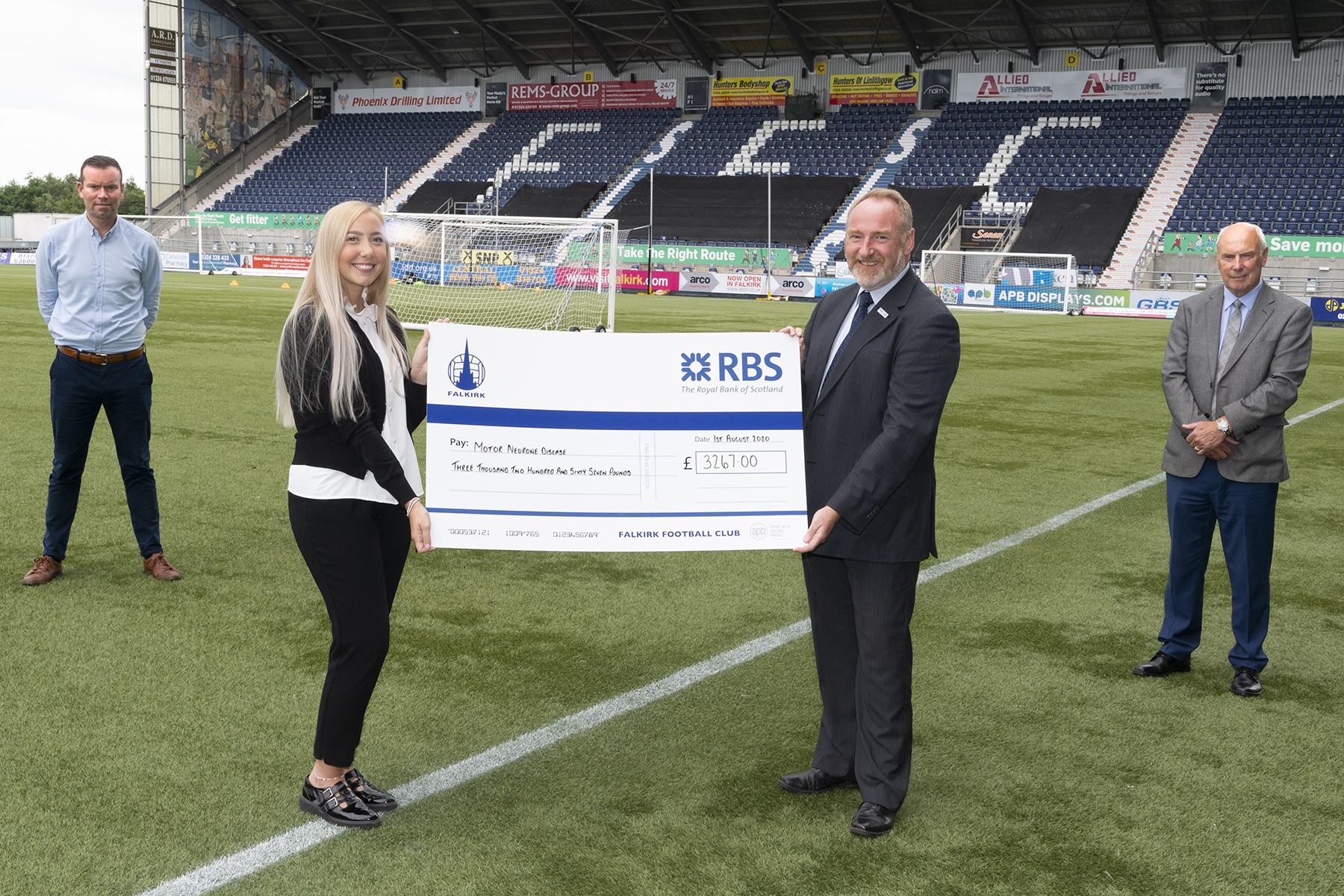 Football supporters dig deep in memory of one of their heroes

Supporters of Falkirk Football Club, and those of other clubs across Scotland, have come together to pay their respects to former player David Hagen who sadly passed away last month after a long battle with Motor Neurone Disease (MND).

MND is a rapidly progressing terminal illness, which stops signals from the brain reaching the muscles. This may cause someone to lose the ability to walk, talk, eat, drink or breathe unaided.

As part of Falkirk’s regular 50/50 draw, supporters raised £3267 for MND Scotland to support the charity to fund vital research and support services for those affected by MND.

David began his footballing career locally in Falkirk before earning big moves in the senior game to Rangers and Hearts respectively.  He joined Falkirk, and was a popular figure among the fans with a notable assist for Paul McGrillen in the 1997 Scottish Cup Semi-Final win against Celtic.  David played 173 games for Falkirk over five years before continuing his career with Livingston, Clyde, Peterhead and Bo’ness United.

“The backing shown by Falkirk supporters, and those of other clubs, is a great testament to how highly David was thought of by everyone who knew him.  We were grateful for the opportunity to pay our respects as his funeral cortege passed the Falkirk Stadium but also to make this donation to MND Scotland.  We know the charity will work tirelessly on behalf of people like David and to support others affected by this terrible condition.”

“David fought a courageous fight against MND and will forever be remembered by everyone associated with the club.  He was a good friend and a fantastic footballer and he’ll be greatly missed by his family but also by the friends he made along the way in his football career.  The memories I have of David in the Challenge Cup Final against Queen of the South and his inspired performances in the 1997 run to the Scottish Cup Final will never leave me. He will be sorely missed.”

“We very grateful for this extremely generous donation and I would like to everyone who helped raise such a fantastic amount. Without supporters like this, we would not be able to continue providing essential physical, financial and emotional support to families affected by MND across Scotland, or fund cutting-edge research to find a cure.

“This is a wonderful tribute to David. During times like these, people with MND and their loved ones need us more than ever, so these funds will go towards helping us stay connected to families to ensure no one goes through MND alone.”

*data from the Scottish MND Register.