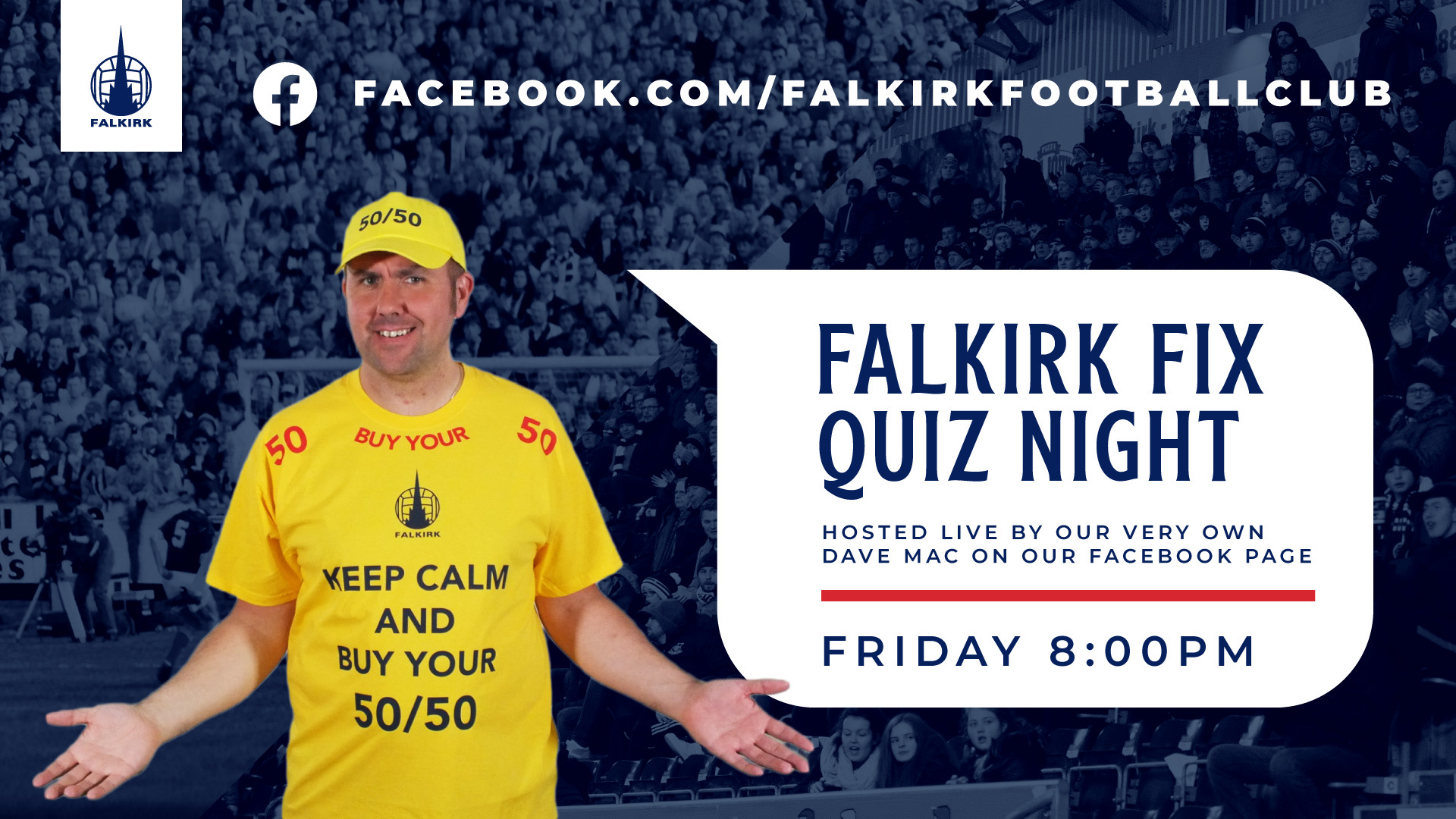 When lockdown was imposed earlier this year, things weren’t looking so good for Falkirk Football Club, Scottish Football in general, and the fans stuck at home with no football to watch. During this time, those behind the scenes at FFC tried to come up with different ideas to keep the fans entertained, as well as ways to help the club get through that difficult period.

One idea that took off and ran for longer than anybody could have hoped was the Falkirk Quiz that was hosted every Friday night by our very own Dave Mac. Thanks to Dave and his quiz, Falkirk fans had something not only to look forward to, but something to keep them occupied while stuck at home on a Friday night.

With this Friday’s quiz set to be the last of a terrific 22 week run, Dave Mac tells us all about the process and preparation behind his Friday night entertainment, and how it all came about to begin with.

“I’d spoken to my wife about it at home during the first couple of weeks of lockdown when all the Zoom quizzes kind of started up. She said to me “you should do one for the football club,” and I thought, “that’s not a bad idea.” I spoke to Kieran and he had thought of the same thing so we were kind of on the same track with that and I said “let’s try doing a Falkirk quiz.

“The first one was just purely Falkirk questions. The idea had been for a one off, there was no long term plan with it at all. I’d gotten a hold of this software that that I’d known about where you could do an automated quiz and have me in vision presenting it, so I thought “in for a penny, in for a pound, let’s try it.”

Straight away, the quiz was a success. With so many fans bored at home with nothing to keep them occupied on a Friday night, Dave and his quiz were a welcome addition to everyone’s weekend, and they turned out in numbers.

“I think for the first week we got 350-odd people taking part in it, so much so that it crashed the software half way through, it couldn’t handle it. And of course, after it there were loads of comments coming in from fans saying, “That was great, can we do it again next week?” And it went from there and week on week it became a regular thing.”

Despite the unexpected longevity of the weekly quiz, Dave is still getting a decent number of fans participating even now that lockdown restrictions have been eased and people are going back to work and getting out and about.

“I’m actually amazed, we’re still getting on average about 60-70 people taking part every week. It’s still down a fair bit obviously because it was in the hundreds in previous weeks when it was full lockdown but even when there has been Champions League and Europa League Finals on, people were still opting to do the quiz, which I find outstanding. It’s obviously something that people are used to doing on a Friday night now, I think it’s a ritual for some of the fans.”

Although it is a good thing that the quiz has gone on for this length of time, it has made certain aspects of Dave’s preparation more tricky, which is understandable when you consider that up until this point, he has put together 660 questions since the quiz started.

“I think I’ve exhausted every quiz book under the sun now because I do 30 questions every week and that’s been 22 weeks now. That’s actually the hardest part of it, trying to find new questions every week so that the people who are doing it week in, week out aren’t getting bored doing the same thing over and over again. I actually source all the Falkirk questions from the Better Meddle archive online, it’s a couple of Falkirk fans that put it together and it’s quite concise.

“I do quiz nights over and above this, proper quiz nights in pubs, so I’ve got a lot of quiz material but I’ve pretty much exhausted all the football categories in the quiz books I’ve got at home. Generally what I do is, every week when I’m doing the quiz I copy and paste the previous week’s questions, take a look at them and keep the same sort of genres of questions going forward. So if there are 10 Falkirk questions one week there will be 10 the following week but different questions. That tends to be how I do it.”

“The hardest thing to do with that type of quiz is working out the wrong answers because each question has four possible answers and I find it’s actually quite difficult coming up with the incorrect answers rather than the correct ones.

It’s also not easy for Dave once the quiz gets going at 8pm every Friday night, as the software he uses presents hardships of its own. However it’s nothing new for Dave who has a wealth of experience with this type of thing from working in radio.

“The actual software itself isn’t mine, I can’t take the credit for that, I found it online and I’ve got to pay for it, so I’ve had to pay every week to run the quiz for the club, it’s not expensive though. The actual operation of the quiz, I’ve got no control over whatsoever, which a wee bit daunting for me as a presenter because I like to be in control of things.

“I write the questions and then at eight o’clock on a Friday night I hit a button that says ‘Go Live.’ From that point onwards the software runs the whole lot, all it does is give me timer points so I can put my speech in between. So I’m running to a clock, I’m talking to a clock basically behind the scenes. The whole thing is timed, I can’t stop it, I can’t pause it, I can’t go back to previous questions, so it’s just exactly as you see it. You often see people saying, “Can I get question five again? I missed it.” Sorry, I can’t go back now!” 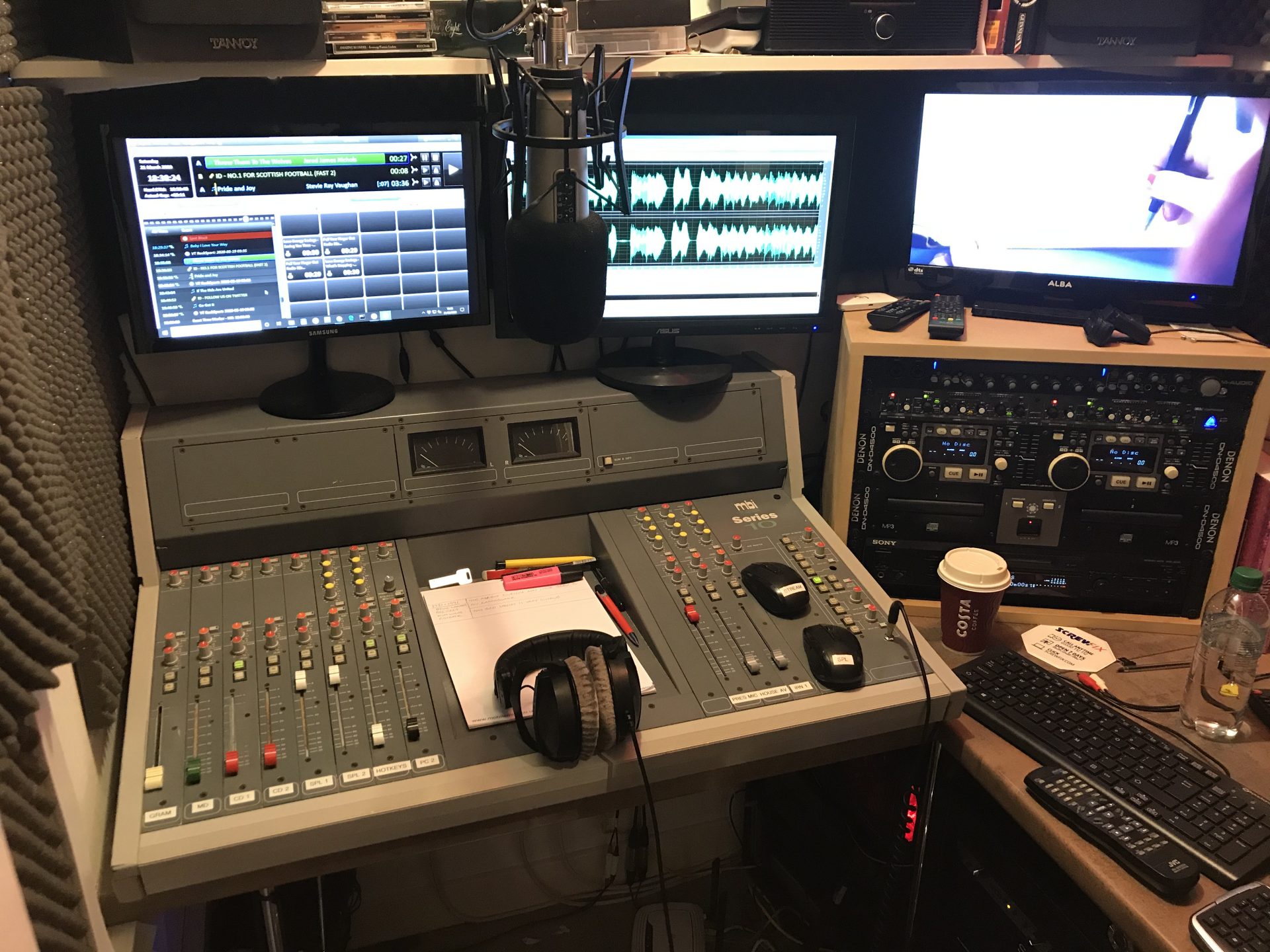 As if Dave and his quiz weren’t entertaining enough, the third week saw the introduction of the 50/50 t-shirts that have been offered as prizes for winning the quiz. Who’d have thought we could come to love seeing what funny new design Dave had on a t-shirt every week?

“I think two or three weeks in was when the 50/50 idea started up. It was from there Kieran started to come up with ideas for t-shirt designs and basically putting 50/50 on everything that I do on the quiz, even the bottom of my glass that I drink my water out of has got 50/50 on the bottom of it! So all those gimmicks came from that.

“I didn’t know from week to week what was coming, that’s how it worked. On a Friday afternoon at five o’clock a guy on a bicycle from Homefront Signs would drop off a carrier bag at my door with a baseball cap and some random t-shirt with one of Kieran’s designs on it inside, and I had no idea until that point what it was going to be. But I’m up for anything, I’m up for a laugh, I don’t mind making a fool of myself in public, I do it for a living. Ultimately it helped the club and that’s why I’ve done it. If you ask me to run through a wall for the club, I’ll run through a wall for the club, that’s just the way I am.”

“When Kieran did the whole ‘Like and Share the post to win Dave’s t-shirt’ I was a bit dubious about that, I thought “nobody’s going to be interested in this” but we get around 50-60 shares a week. It’s one of those keepsakes that’s probably extremely unique in any walk of life, let alone in football.” 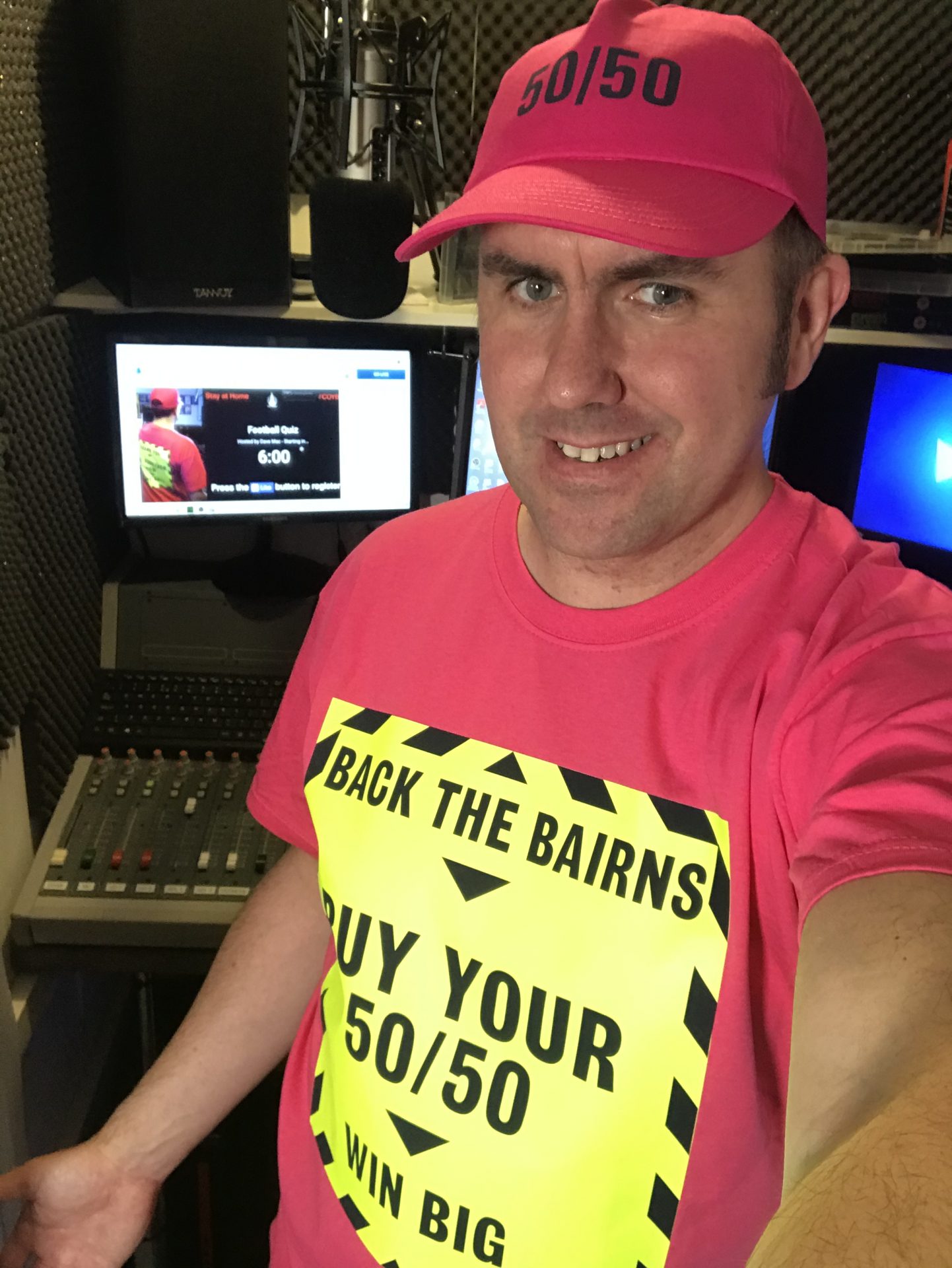 Although it has been hard work, Dave is ultimately grateful to the club and the fans for the opportunity to run the quiz as it was the only thing that was keeping him going through lockdown, and he will sign off after the very last quiz on Friday by letting everyone know how much he appreciates them taking part every week.

“I’ll just sign off at the end by thanking everyone very much for taking part and I mean that genuinely. It’s been as much of a life saver for me actually collating those quizzes, especially when lockdown was in full force, because that’s what kept me going because I wasn’t working, I wasn’t doing anything, so the fact that the club got in touch with me and asked if I fancied doing the quizzes and the videos on Saturdays for Falkirk TV, it’s been an absolute life saver for me. I can’t thank the club enough for giving me that work and the chance to do some stuff because otherwise I would have been sitting vegetating in the house.”

The success of the quiz, which has also massively helped 50/50 draws, is something that Dave gives the fans a lot of credit for, and mentioned just how overwhelmed he is by the support from the fans over the last four or five months.

“It’s helped the club massively. I can’t take all the credit and neither can Kieran. The fans are the ones who have got to take the credit for this. The whole 50/50 thing has been for more successful than any of us every thought it would be, to raise over £30,000 in that period is just unbelievable and that’s not even counting all the sponsorship we’ve managed to get for the virtual matches and even the virtual Jean Sneddon that comes into the videos beside me on a Saturday has been sponsored twice, it’s phenomenal!

“I’m 99% certain that no other club in Scotland has managed to generate anywhere close to that during lockdown. It’s a massive hats off to every Falkirk fan who has seen the plight that Scottish football and the club was in because of the situation and said, “right, let’s do this, let’s help the club out.” And they’ve done it in an unbelievable way.”

It’s a shame that the quiz has to come to an end, but at some point things have to return to normal. It is something that Dave and all the fans will miss and it will be sad to see it come to an end this Friday.

“There’s no question that I’ll be sad to see it go. It’s been really enjoyable for me. The hard work is putting it together but standing there on a Friday night in front of the camera and doing it, that’s me, that’s what I love to do and it’s great to have banter with the supporters. The banter’s been brilliant on that Facebook feed every Friday night, people taking the Mickey out of me, taking the Mickey out of each other. Overall it’s been brilliant fun and to stop doing that is going to be sad, but ultimately we want to get back to playing football again and get some normality back into our lives.”

Commercial Director Kieran Koszary said, “I would like to thank Dave for all his hard work creating and hosting the quiz every Friday night. I must also make a special mention to Dave for donning some of the more outlandish t-shirt creations that I surprised him with. He certainly went the extra mile to support the club during this period. I’d also like to thank all the fans who took part and congratulate all the winners.”

Make sure you take part in Dave’s final quiz this Friday night at 8pm.