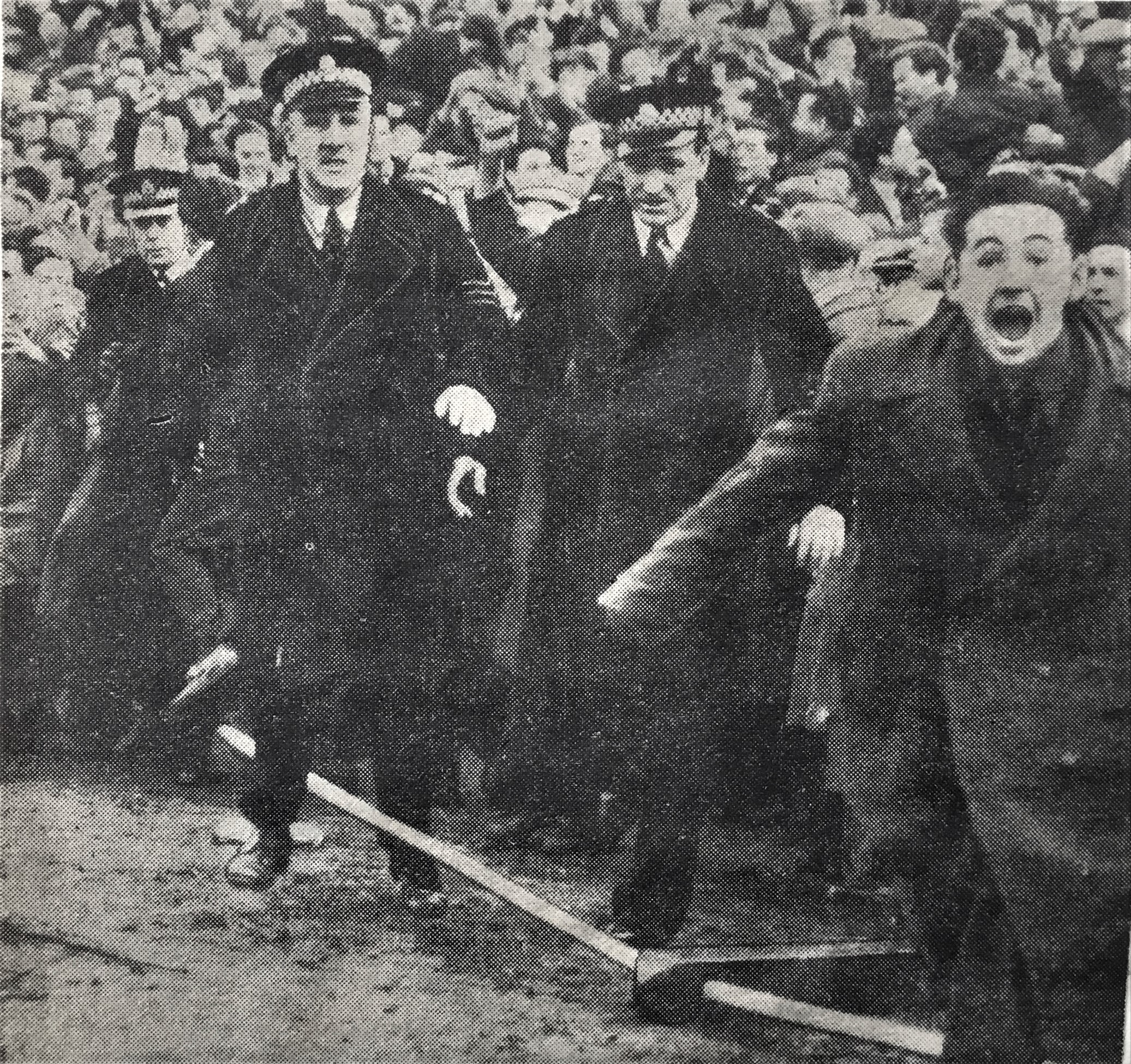 February 23rd, 1953 might well have gone down in Football History as a day of disaster, as Brockville Park was nearly added to the list of grounds where crowds were exposed to serious danger and lives were at risk. It was a Scottish Cup Third Round tie between Falkirk and Celtic, played in front of a recorded crowd of 23,100 – the Brockville record attendance. In truth, there were more than that in attendance and the figure could well have been nearer 25,000.

Falkirk were having an indifferent season in the league, and even in February, there was clearly going to be a struggle to hold on to the place in Division A. The Bairns had come up from Division B along with Clyde and were clearly finding it hard to adjust to the better quality of opposition they were facing. It was November 1st before they recorded their first league win- a surprise 1-0 win at Tynecastle- and by the turn of the year, things looked distinctly threatening. A 7-2 hammering at Pittodrie had done little to lift spirits, although the Ne’erday Game gave a glimmer of hope. Lowly Third Lanark were hammered 5-1 at Brockville, but Thirds were a poor side and looked destined for the drop. Perhaps the Scottish Cup might bring some desperately needed success?

The First Round paired Falkirk with Newton Stewart in Kirkcudbrightshire and the expected walk-over failed to materialise. An impressive crowd of 2,500 cheered their local heroes off the park after a well-deserved 2-2 draw. Falkirk eventually made no mistake, winning 4-0 in the replay at Brockville. They faced Forfar Athletic in the next round and won 4-0 against one of the weakest sides in Division B.A George Millar hat-trick at Station Park was to prove a rare scoring highlight in an otherwise forgettable season. The win set up a Brockville home tie against Celtic. The Glasgow side had reached this stage after wins against Eyemouth and Stirling Albion, the latter after a replay at Parkhead. They were not the greatest Celtic side, and their league form was inconsistent, and they were to end up in a mid-table position, having lost twelve of their thirty league fixtures. They had already beaten Falkirk twice in the league- both high-scoring affairs- and a cracking game was in prospect. 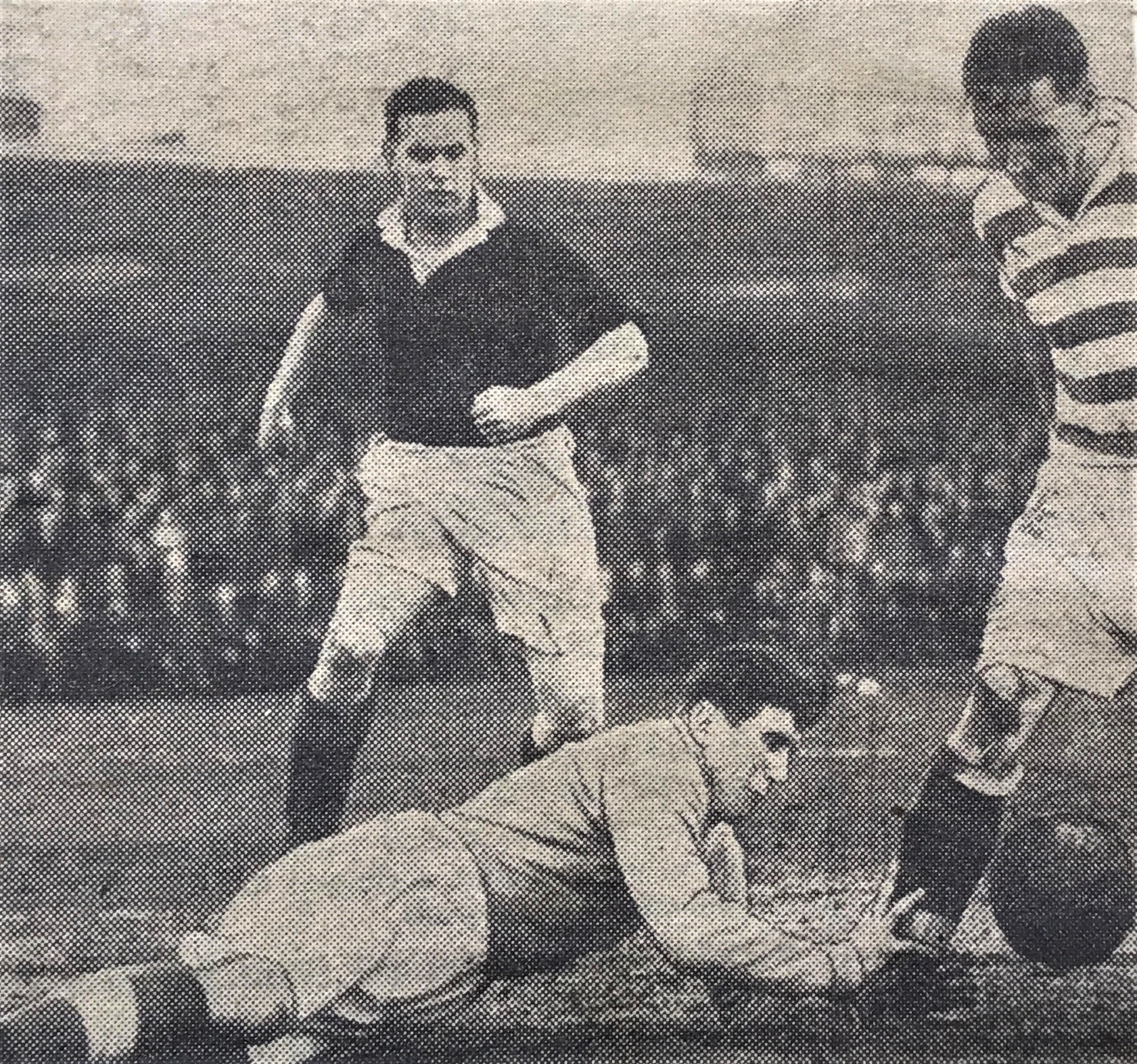 It was to be an all-ticket game and the Celtic Supporters Association were not happy with their original allocation of tickets for the game and called for a boycott of the game. Football was very much the biggest sport in the country, and the attraction of a Scottish Cup tie was always going to be strong. With Rangers and Hibs fighting it out for the League title, the Celtic fans clearly saw Scottish Cup success as their best chance of lifting a trophy. They had failed to qualify from their group stage in the League Cup, and as the day of the match approached, the boycott campaign was rapidly losing momentum. It was obvious that there was going to be a big, big crowd at the game. Falkirk had rarely seen a day like it and hundreds of special buses were stopped by police and diverted through Bonnybridge, Larbert, and Carron to Grahams Road. Only 30 coaches were allowed into the Brockville car park, so the side streets off Grahams Road were packed with buses. There were forty policemen on traffic duty in an attempt to control the large and vociferous crowds piling from the buses.

From 2.00pm onwards, there was a steady flow of people heading for the turnstiles, and except for the Watson Street End, there was relatively little difficulty in getting in. The Watson Street End was the centre of the problem. The congestion was increasing as more and more Celtic fans were anxious to get in and by 2.45pm it was obvious that the police were facing a major problem trying to control the crowds. It was decided to open the large exit gate- just enough to allow the crowd in two at a time. The pushing and shoving increased and the gate was prised further open allowing many supporters to get in without giving up their tickets. Several fans rushed to the top of the embankment and threw their unused tickets to those waiting in the crowds below. It is not known how many gained accesses without having a ticket and the whole episode was an accident waiting to happen. Those who find modern measures of policing, stewarding and electronic registering of crowd numbers at access points should be grateful that they were not present that day. Younger fans climbed the telegraph poles to clamber over the boundary walls and into the ground. By kick-off time, there was no spaces on the terracing and many spectators were sitting on walls, and round the perimeter track. Finally, the game got underway. 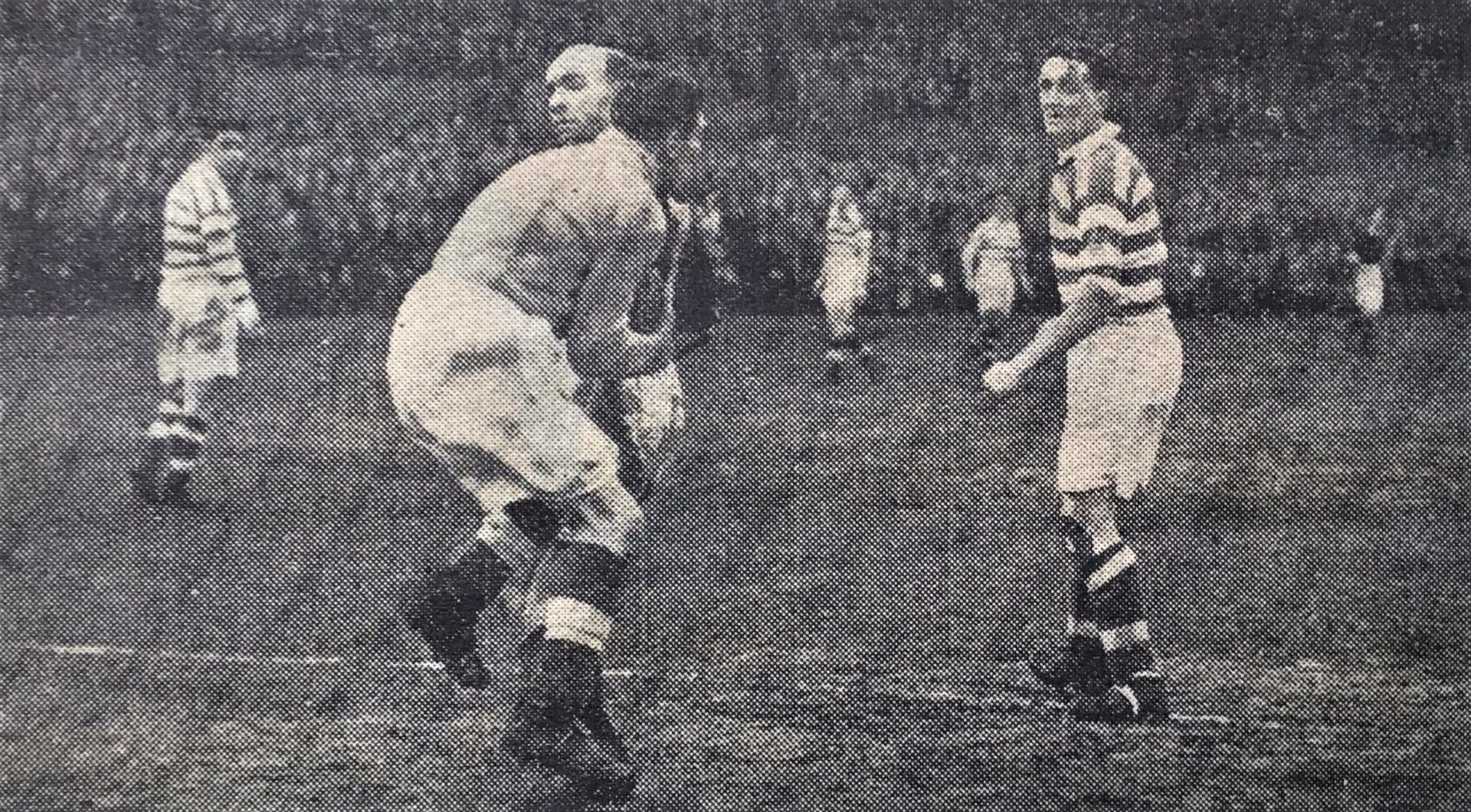 Nobody who was at this game will ever forget it. Events off and on the park made this a game to remember- and not always for the right reasons. When all is said and done, there is no doubt that the crowd trouble and subsequent disruption to play, threw Falkirk off their game and Celtic took inspiration from the raucous support of their fans and showed again a never-say-die spirit that their tradition demanded. Falkirk got off to a great start and were running the Celtic defence ragged. The Falkirk forwards were giving Haughney, McPhail and Meechan a torrid time and JOCK WEIR and DAVIE CAMPBELL both scored with headers in the first half. Jock Stein was found wanting at one of the goals and keeper Bonnar looked somewhat flat-footed at times. It was all one-way traffic and Falkirk well deserved their half-time lead. 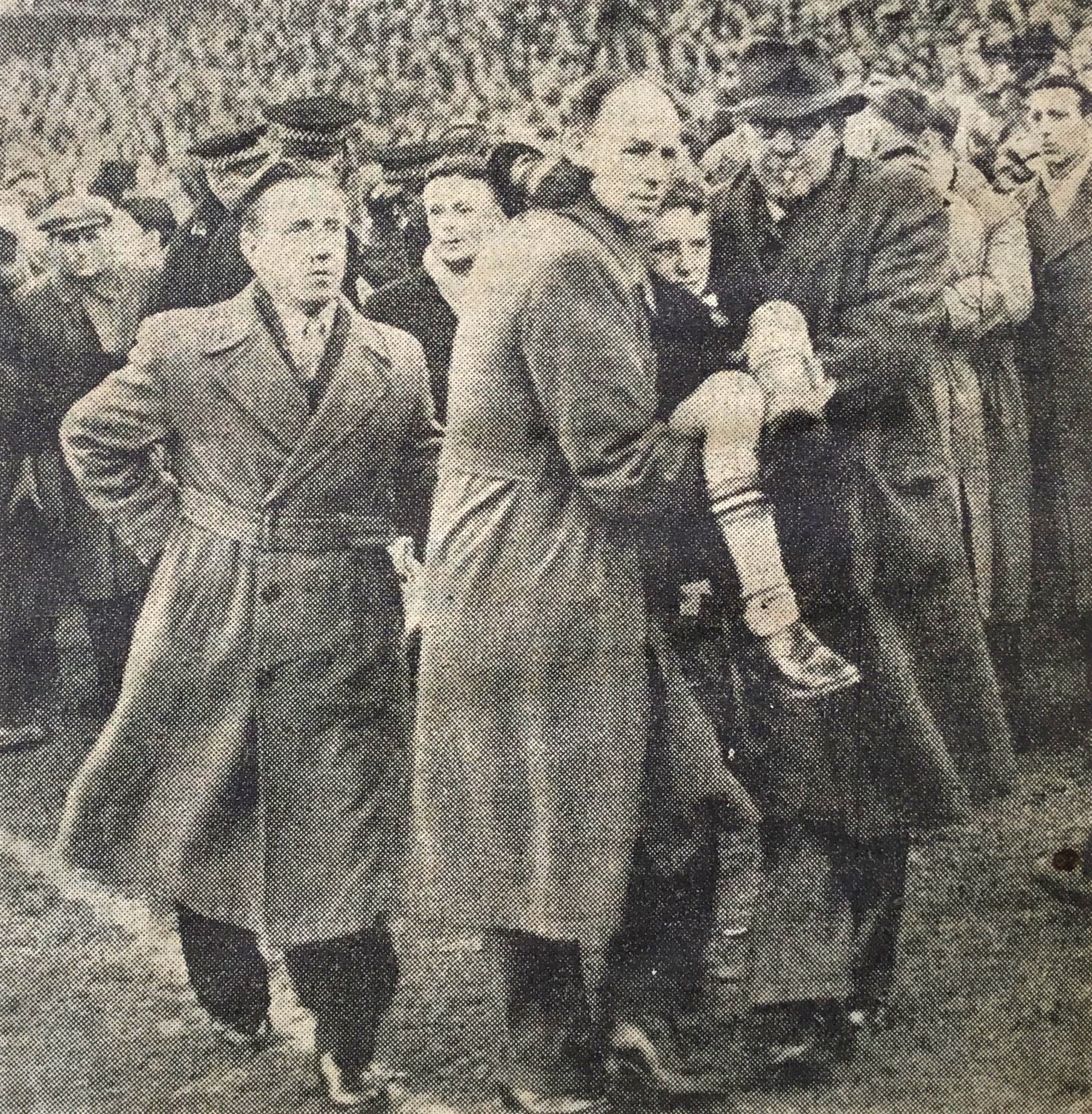 Brown missed a sitter from only 6yds. Out after a great Delaney cross had opened up the Celtic defence and that could have ended the game as a contest. It was to prove a costly miss as Celtic came back into the game. They did so with one of the most unforgettable goals ever seen at the old ground. Celtic were awarded a corner kick and Charlie Tully’s in-swinging corner went straight into the goal to give keeper Archie McFeat no chance. The kick was ruled out for an infringement and ordered to be retaken. To the delight of the Celtic support, CHARLIE TULLY amazingly repeated the feat and this time, the goal stood. Tully was a real maverick of a player and achieved this feat on more than one occasion in his career. The goal caused some fans in the packed terracing to surge forward and some of the crowd spilled on to the pitch. Play for held up as police tried to restore order. The atmosphere in the ground was electric and when WILLIE FERNIE equalised form a header mayhem ensued. The fans again surged forward and spilled on to the track. Eight or nine of the crush barriers had collapsed and sections of the boundary rail were snapped under the sheer pressure of bodies. Many sought refuge on the pitch itself and the area near the goals was a mass of people. Clearly, there had been injuries, and some were seen to collapse on to the ground and in pain. Others were oblivious to the events in front of them and rushed on to the park to celebrate the equaliser.

Police and ambulancemen attended to the injured and a tannoy announcement asked if there were any doctors present in the ground. It was obviously serious, and some 25 spectators were taken to the dressing-room area to receive emergency treatment. The ringing of ambulance bells was clearly heard, and six casualties were rushed to Falkirk Infirmary. It took some time for the chaos to clear and the crowd were shepherded back onto the terracing. In 66 minutes, JIMMY McGRORY scored a winner and yet again, there was another pitch invasion. McGrory was swamped by over- excited supporters and seemed to be in danger of collapse. He needed treatment from the Celtic trainer before he could resume.

It was a different game now, and Falkirk suffered a further blow when keeper McFeat was injured tipping a McGrory effort over the bar. He had to leave the park and only returned later to see out the game in the outside left position. The final whistle occasioned another pitch invasion as the Celtic fans rushed on to congratulate their heroes.

Once the crowd had dispersed, Brockville looked like a bomb site, with the cement supports of the crush barriers battered and broken. The metal barriers themselves were twisted and had buckled. It was a miracle that there hadn’t been fatalities or more serious injuries. The attendance of 23,100 was given and it remained a record attendance for Brockville. In truth, there were many more present at the game and some vowed never to go back to another Old Firm cup-tie.