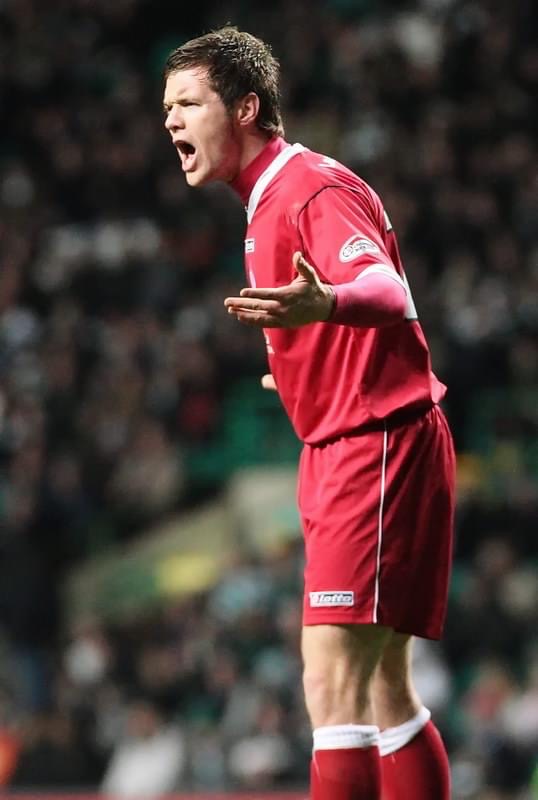 Across nearly seven years with Falkirk Darren Barr captained the club in the Premier League and in a Scottish Cup Final. He joined the club as a youngster and fought through an early set back to get his first contract.

“I started with Falkirk as a YTS and did my two years. I remember my first year quite well, not for good reasons mind you! We went in their straight away and did all the running, then we got the balls out, and I did my cruciate ligament. It meant that season was a bit of a write off for me, but Falkirk had a great physio at the time called Alex McQueen who got me through it.”

“After I got back, I had my second year to try and get a professional contract. It was a difficult time, but I loved the second year and got a pro contract. It still took a while from there and I was at the club for a good time before I got a start or a real run in the team.”

Before he made it in the Falkirk team the versatile young player developed his game out on loan at Forfar Athletic.

“I went on loan to Forfar and got my first experience of first team football, I absolutely loved it. It gave me a bit more confidence and showed me what it was like in the first team. It showed me the passion and dedication the part time boys had, they all had time for me as a wee boy going up there. I came back and it was the following season I really started to play for Falkirk.” 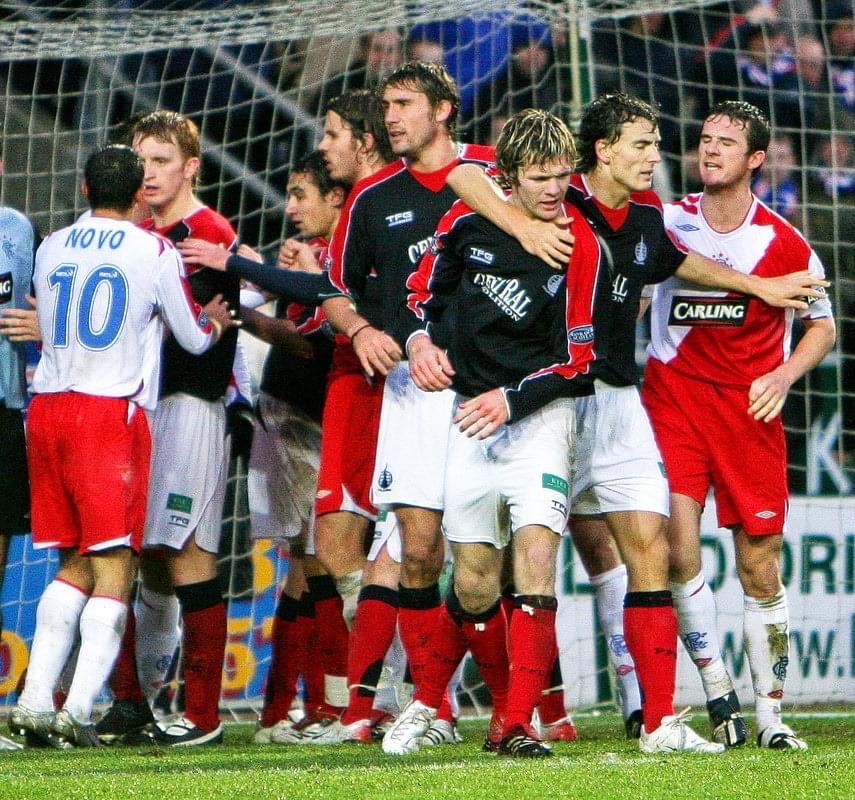 After working extremely hard for several years Darren finally made his breakthrough and became a mainstay in the Falkirk team.

“I grew up at Falkirk seeing the likes of Lee Miller and Mark Kerr break through, so you knew you’d always get your chance before they punt you out the door! It was a really good time to come through.”

“That season I got a start and really managed to kick on from there. I started to establish myself in the team which was really nice. I don’t know what it was, whether Yogi saw something a bit different in me or being out on loan helped me out that wee bit.”

“I was playing with guys like Kenny Milne and Jack Ross. There were some really good players and especially as a defender trying to come up in the game it really helped me big time and took the pressure off a bit.”

The defender’s first goal for the club came against rivals Dunfermline in August 2006.

“It was my first season really in the first team and it was something else to be fair. The atmosphere was great, and the stadium was packed. To win one nil and score the winner was something really special, I’d have been happy to just get the win with the clean sheet to be honest!” 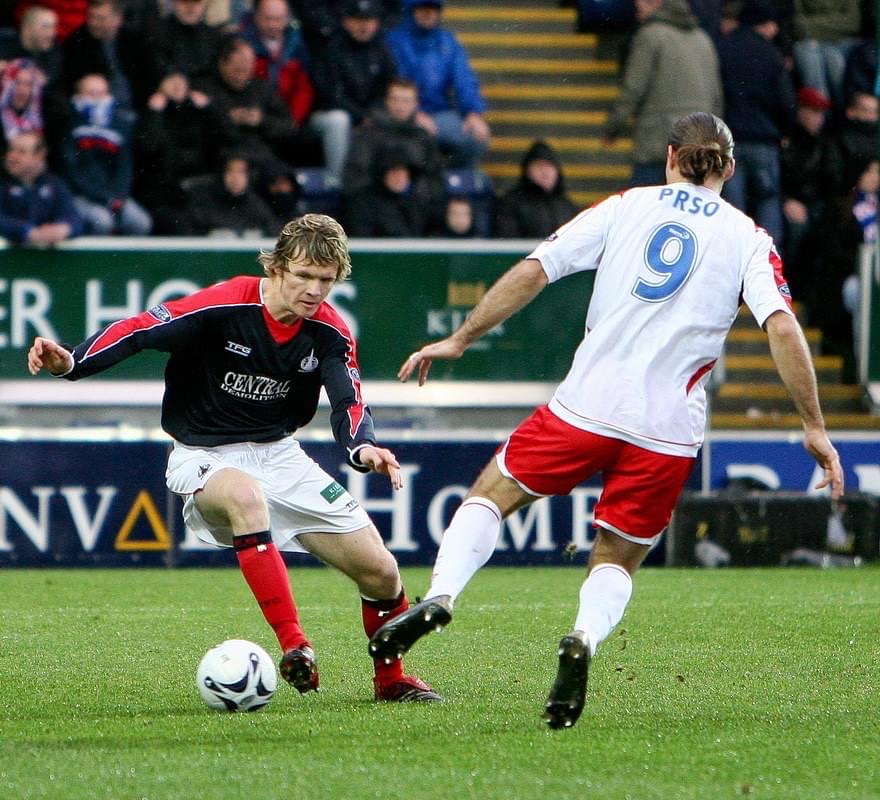 Darren was named Falkirk captain at the age of only 22 in January 2008. He went on to captain the side until his departure in 2010.

“It was nerve racking to be honest! It’s the club you’ve been at for so long and to be asked to be captain was a massive honour as well as a massive responsibility. I had good pros around about me that helped me, and I just tried to give everything. I maybe wasn’t the biggest talker, but I did what I could to go out and leave everything on the pitch.”

The 2008/9 season was John Hughes final as manager and in typical Falkirk style it took to the final day of the season for his team to secure their safety in the league.

“It was a strange because we were so up and down that season. We struggled in the league, but we did well at times. It was just an absolute rollercoaster of a season. The Gaffer stuck to his guns, he wanted to play a certain way and even though we took a few doings we tried to do the right things.”

“To save it on the last day was incredible with that Michael Higdon goal to keep us up. It was just pure relief, as much as we were celebrating! It was a great time to be a part of the club and it was fantastic experience-wise.” 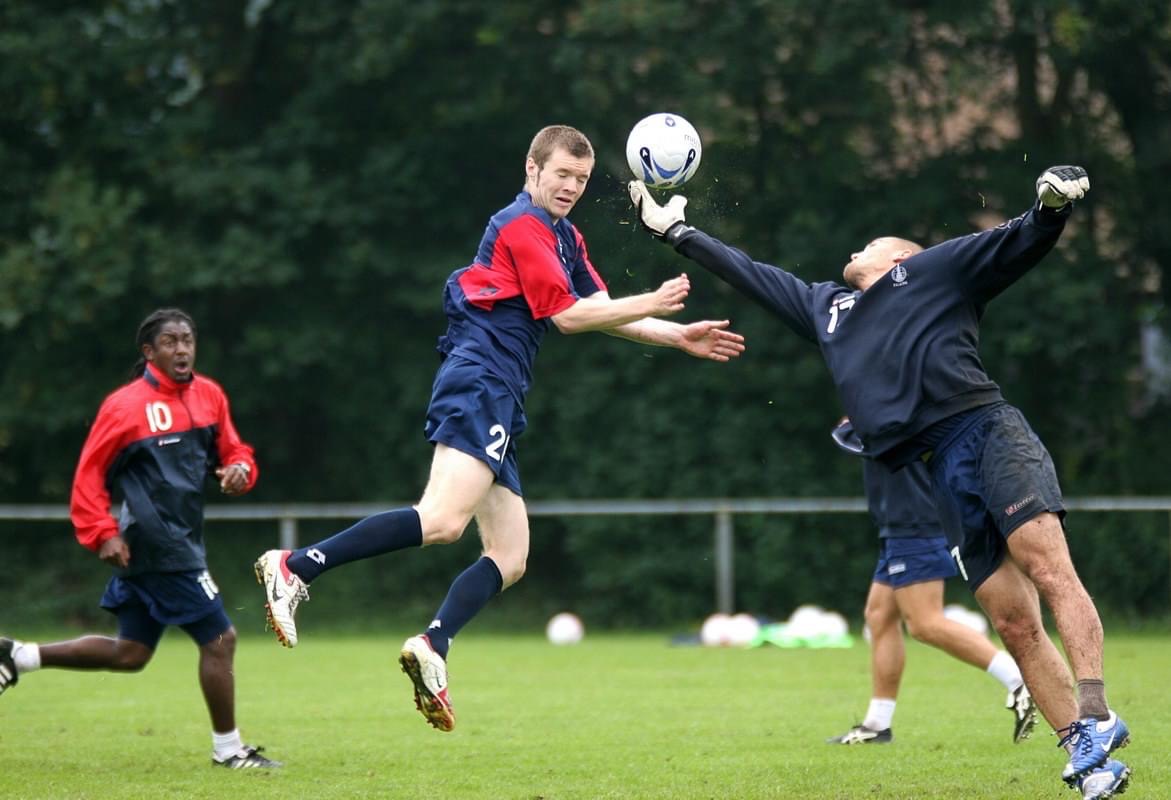 It wasn’t just drama in the league that season as Falkirk reached the 2009 Scottish Cup Final. Sadly The Bairns were defeated 1-0 by Rangers but the run was a huge experience for the entire squad.

“We were always big on pushing forward and trying to do something no matter what competition we were in. After we won the quarters there was a wee feeling, then getting Dunfermline in the semis was amazing. That couldn’t have been better, with the rivalry and everything. You knew what it meant to everybody and for Scobbie and Scotty to score was something else.”

“It was just a shame that final game, to play so well and get beat, it was maybe the story of our season a little bit. I thought we were excellent that day, it was just a great goal by Nacho Novo that decided it. It would have been brilliant to win that cup, I’m still gutted to this day about that final!”

From the highs of the previous season it was to be the low of relegation the next. Darren spoke on the 2009/10 season that saw The Bairns relegated from the SPL.

“I have a bit of regret about that last season. Eddie May came in and changed a few things, which included shifting me to a different position. I do think I should’ve stayed strong, because I made my name at Falkirk as a centre half. I didn’t speak up because I knew I was a versatile player and I would’ve played anywhere for the club.”

“That went down to the last day as well, it was so tight, but we just couldn’t get those wins. it was a tough one to take. It just didn’t work out and unfortunately it was my last season with the club so there’s a bit of regret, because they gave so much to me.” 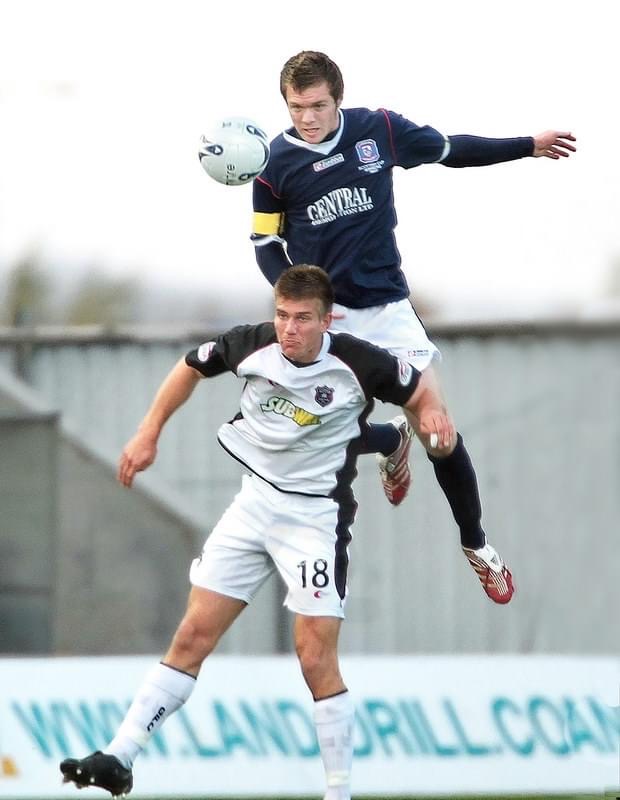 The January before Falkirk’s relegation Darren signed a pre-contract with Hearts and at the end of the season moved to the Tynecastle side for a three-year spell.

“At that time in my career I thought I had to go and try it at a bigger club and test myself. I went to Hearts and the first season went okay, I was a bit in and out. The next season we had the likes of Zaliukas and Webster, so I started in front of the back four, and I loved that role.”

“We got to that Cup Final against Hibs and I played a good few times in Europe, against the likes of Liverpool as well, then the following season we got to another cup final when we got beat by St Mirren in the League Cup. I had a really good two years there, even if my body and injuries didn’t help at points.”

The highlight of Darren’s time at Hearts was undoubtedly the 2012 Scottish Cup Final. The game was an Edinburgh derby, and the boys in maroon destroyed their arch-rivals 5-1, with the ex-Bairn scoring the first.

“That final was unbelievable. I scored the first, I think in my time at Hearts I scored less than five goals and three were against Hibs! Scoring on that day and everyone just jumps all over you, you’re thinking ‘I can’t believe this’! The way we kicked on and played that day was absolutely brilliant.” 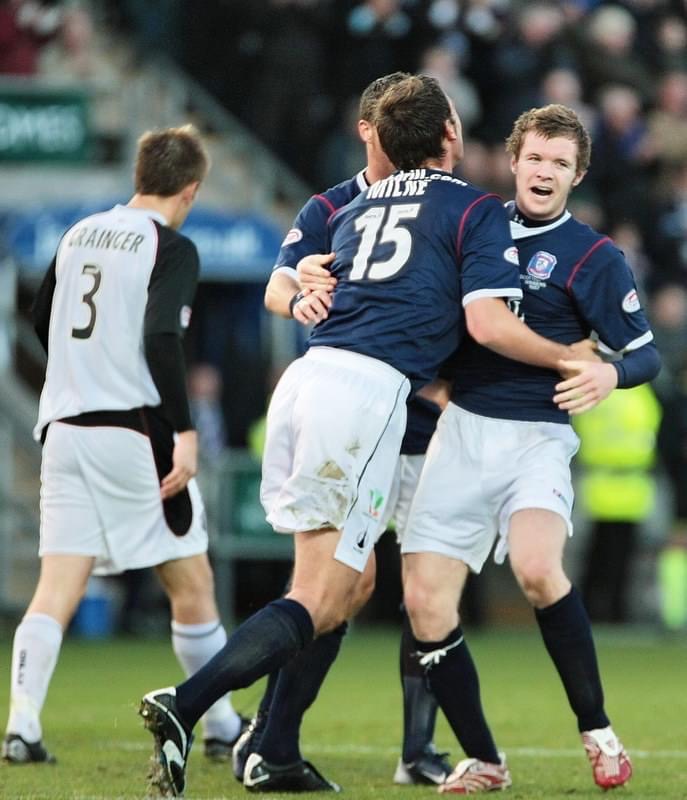 After a successful few years at Hearts it was time for Darren to move on again, but his injury troubles would come to the fore during the following years at Kilmarnock and Ross County.

“I went to Kilmarnock after coming away from Hearts on a bit of a high and after ten games I did my hip. I was out for the season and that’s probably where my career started to take a bit of a turn with my injuries.”

“After there I went to County and they were really great with me. I went up there, played a few games, and did my other cruciate! I must have only played about seven games. Those couple of years were hard to take, it feels like your body is letting you down a bit.”

After recovering from those terrible injuries Darren made the decision to go part time with a Dumbarton team that defied the odds to stay in the Championship year after year. The move to part time also started the now 35-year-old’s journey into coaching.

“After my cruciate I got some really good help and rehab up there and went part time with Dumbarton to hopefully go a bit easier on my body. I loved my time there, we stayed in the Championship a good few years and I was captain there as well. I had my chances to go back full time while there, but I just didn’t feel like it was right for me. I just wanted to play football.”

“At Dumbarton I was coaching at Forth Valley, then Morton came in and asked me to coach their development squad. After nine months there it didn’t work out, so I went back to play part time for East Stirlingshire. I went to Annan and was coaching there as assistant manager, so it’s just a progression really. I do really enjoy so hopefully it keeps going.” 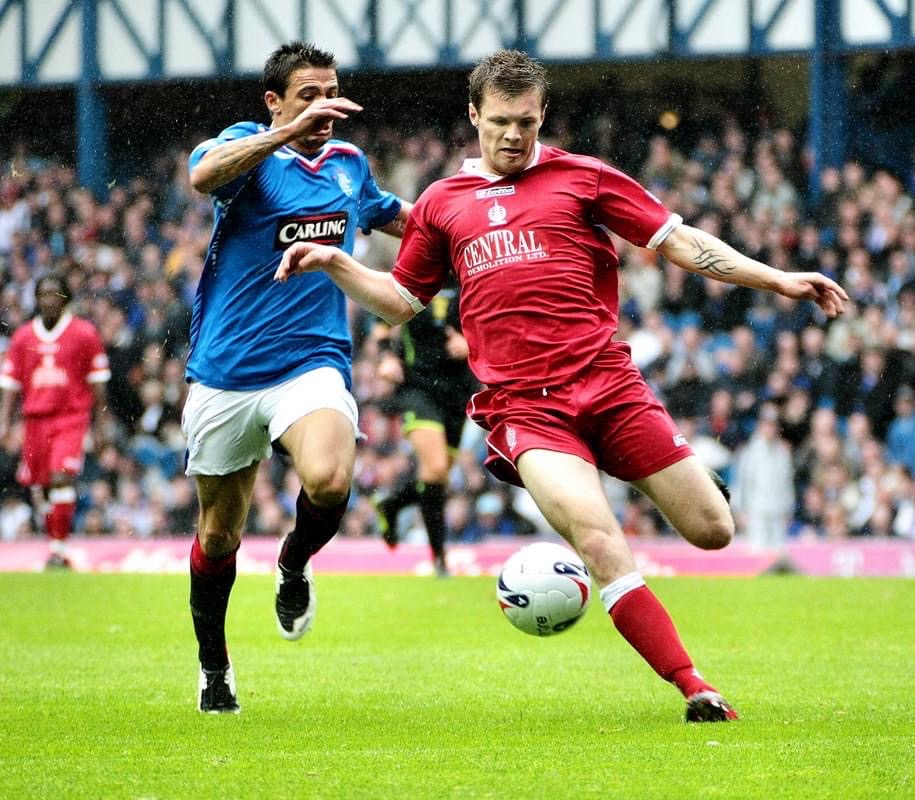