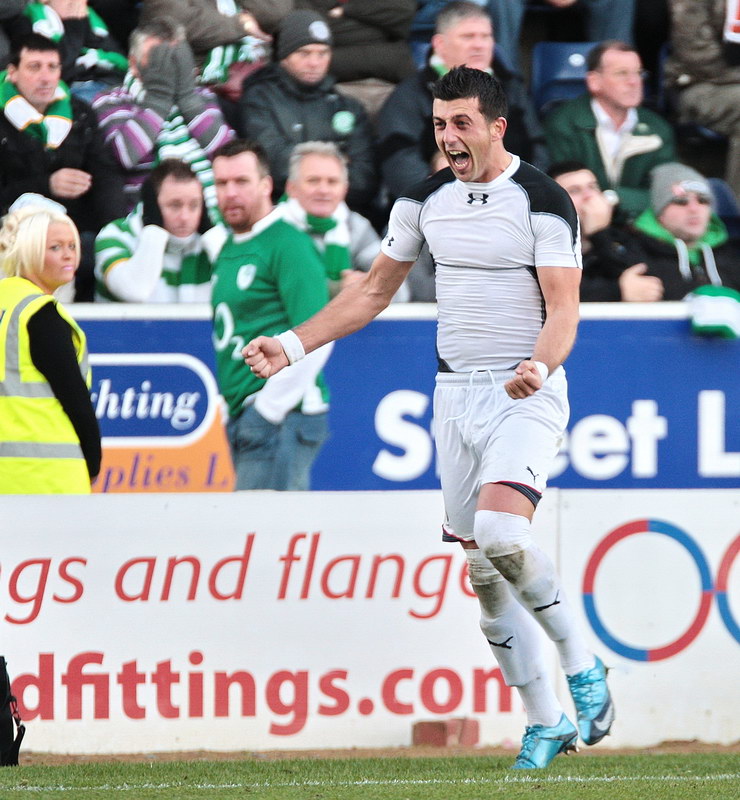 Fans favourite Pedro Moutinho went into detail about his time with The Bairns across three spells with the club.

The Portuguese native came to Falkirk after two years at FC Penafiel, a massive change for the player who knew very little about the Scottish game at the time.

“At the time I was 23 or 24 and the team I was playing for got promotion to the top league, but they didn’t offer me a new contract. In the meantime, through my agent and Russell Latapy, I ended up going on trial to Falkirk.”

“I didn’t know much about the club, or even the league. I knew the name Mark Kerr from the Championship Manager game! When I joined it was the first year in the new stadium, so it was just one stand which looked a bit awkward. I remember the pitch was absolutely fantastic, we used to train at Little Kerse which were great facilities.”

“The biggest thing was the people, the way they treated me from the very beginning. I was impressed by that and I really enjoyed that.”

Despite never having played in the league before Pedro soon settled in, despite having to learn to decipher some strong Scottish accents!

“The language was difficult at first. I was alright at English but listening to the boys with their Scottish accents was a bit of a struggle! In terms of the football it took me maybe four or five months to really start to feel comfortable because it was a bit different to what I was used to.”

Russell Latapy was massive for Pedro in helping him both join The Bairns and settle into life in Falkirk. He spoke about his memories of the Trinidad and Tobago internationalist.

“The wee man was alright! To this day people ask me the best player I was around in my career. I wasn’t Cristiano Ronaldo at the top level but from the boys I’ve seen on the park Russell was the most talented player by a country mile.”

“You see the games and judge people on the games, because that’s when it really matters, but training with the guy every day was just ridiculous. To top it off he was a great guy to be around, a really good laugh and all that.” 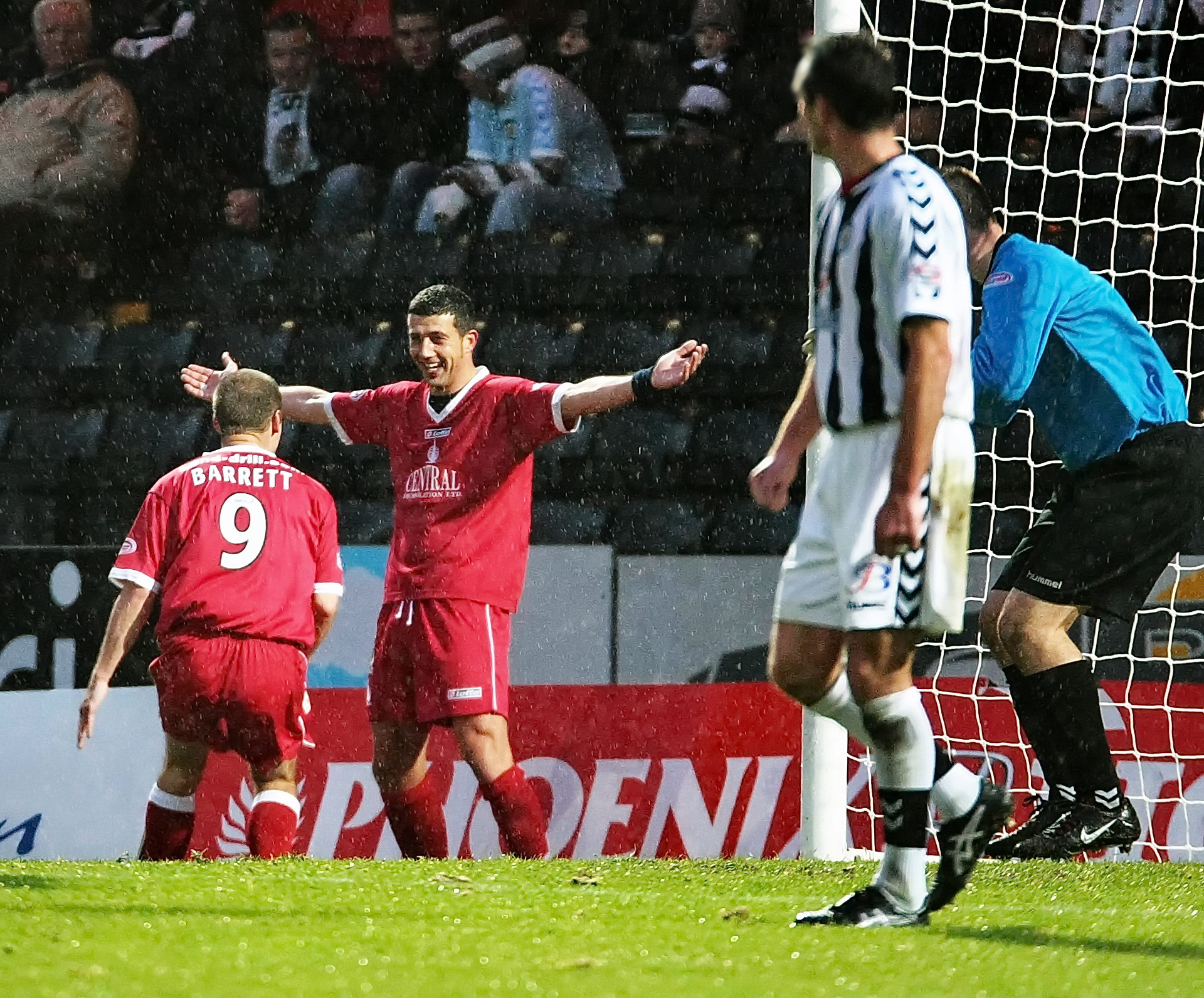 Pedro’s first season with the Bairns was marred with a terrible knee injury that continued to cause him problems throughout his career. The forward struggled after being ruled out for a year with life looking uncertain, but the kindness of a Falkirk fan was a massive help for him in those dark days after the injury.

“Around November of my first season is when I done my knee and that took me out for a year. It was probably the first really bad injury I had and it was one of those that you don’t expect to happen as a player, there was no way to see it coming which was hard to deal with.”

“I used to stay at a place down on Wallace Street. I had the surgery and I was pretty much at home for the first week or two because I couldn’t move properly. I remember I got home one day and there was a Christmas card from a fan wishing me a speedy recovery and all that.”

“At that time, especially that day, I was feeling pretty low and it really cheered me up. That little gesture really, really helped me even though it was difficult, that’s what Falkirk is all about, the people that surround the club.”

The club got promoted that season into the Scottish Premier League under John Hughes. Pedro was delighted but missing out through injury dampened his jubilation.

“It was a bit sweet and sour to be honest with you! Obviously, I was happy that we got promoted but at the same time it was difficult to see the boys doing something like that when you can’t. It was tremendous for the club at that time, with the new stadium and all that, and a step in the right direction. I celebrated as much as I could, but I did have that disappointed taste in my mouth.”

The club performed well the next season after getting into the top tier of Scottish football. Pedro was still ruled out for much of the first half of the campaign but came back in time for a memorable comeback against Rangers at Ibrox where he managed to get a goal.

“Scoring that goal was a massive relief after coming back from the surgery. That moment was unforgettable, we got the point when everyone was expecting us to get beat and managing to score a goal was the first key moment I had after the surgery, it’s when I thought, I’m back!” 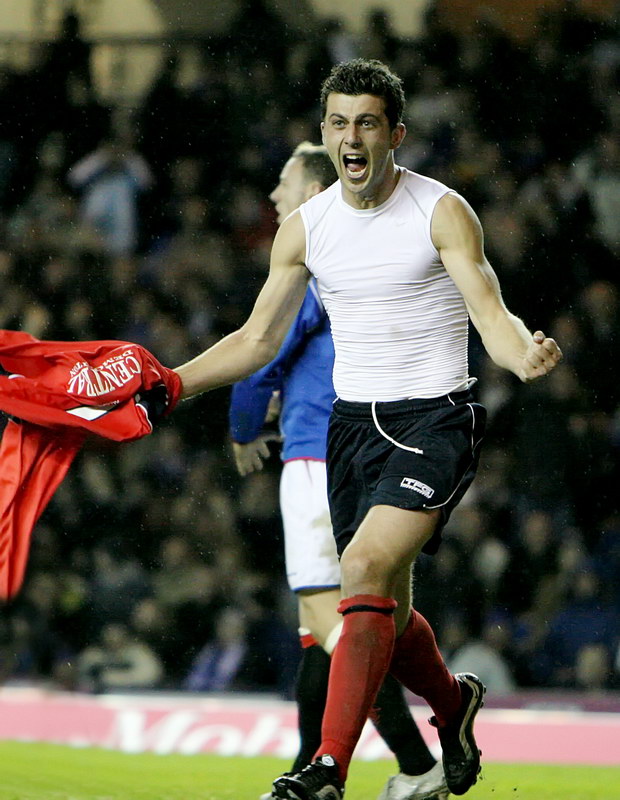 The other scorer that day was Alan Gow. Pedro played with Alan, who is now Head of Football Operations at the club and gave his thoughts on his former teammate’s appointment.

“I think he has everything to succeed. He’s played the game; he’s been at the club and with his personality I think he’ll do well. I’ve been in touch with him recently and it’s definitely a positive thing for him to be around with his knowledge of the game, as well as his contacts. Fingers crossed for him and the club to make it work!”

Pedro was joined by fellow countrymen Tiago Jonas and Vitor Lima while playing for Falkirk. He, alongside Russell Latapy, helped his compatriots settle into life in Scotland and still reminisces with them about their time at the club.

“I knew Vitor because I used to play with his older brother in the youth system and Tiago I met later. Russell did the same with them as he did for me to make them feel welcome and I tried my best to help them. I speak to them and they still remember those days with a smile, it was good times.”

Pedro left the club after failing to agree a contract extension following the 2007/08 season but was soon back after some time back in Portugal.

“I went without knowing much about the club and stayed for four years. Everyone knew my fondness for the club and when it came time to renegotiate my contract on a yearly basis, I think my liking for the club worked against me.”

“My fourth year I had a decent season and I knew how much they offered boys they were trying to sign, and it was double what they were offering me. I had a conversation with people at the club and I wasn’t happy about it, I felt it wasn’t fair, so I said if they matched the offer, I’d stay but it didn’t happen.”

“I was happy there, but those kinds of things affect you as a player and I had to do what was best for me as the club did what was best for them. When I returned within a year it wasn’t because I got the salary I wanted, but the time away made me realise how good I felt at Falkirk.”

Pedro returned for the 2009/10 campaign that ended in The Bairns relegation from the SPL. He spoke on his dismay after believing the club would avoid demotion to the First Division.

“That was the second time I got relegated in my career. The first one was painful, but that one was probably the worst afternoon. I honestly believed we would stay up. We drew at home the week before, we were up and they scored towards the end of the game, and it made things complicated because we had to beat Killie.”

“It was like being punched; I don’t know how to describe the feeling. A lot of things went wrong that season, but we tried our very best to the end.  I honestly really believed we’d survive and when that moment comes, and you realise you were wrong, it was difficult.”

One bright moment that season was an amazing three all draw with Celtic against all the odds. That game marked Pedro’s return to the club as well as a goal, so he remembers the day well!

“That was my first game back and I remember it well. I had problems ending the contract in Portugal, so I didn’t join till the end of September. I’d only had a few training sessions and I wasn’t supposed to start the game, I was meant to be on the bench.”

“In the warmup Carl Finnegan got injured and we didn’t have many attacking options on the bench apart from myself. I remember saying to the manager I might only last 20 minutes, he told me not to worry and just try to save myself! He turned out to be right in the end!” 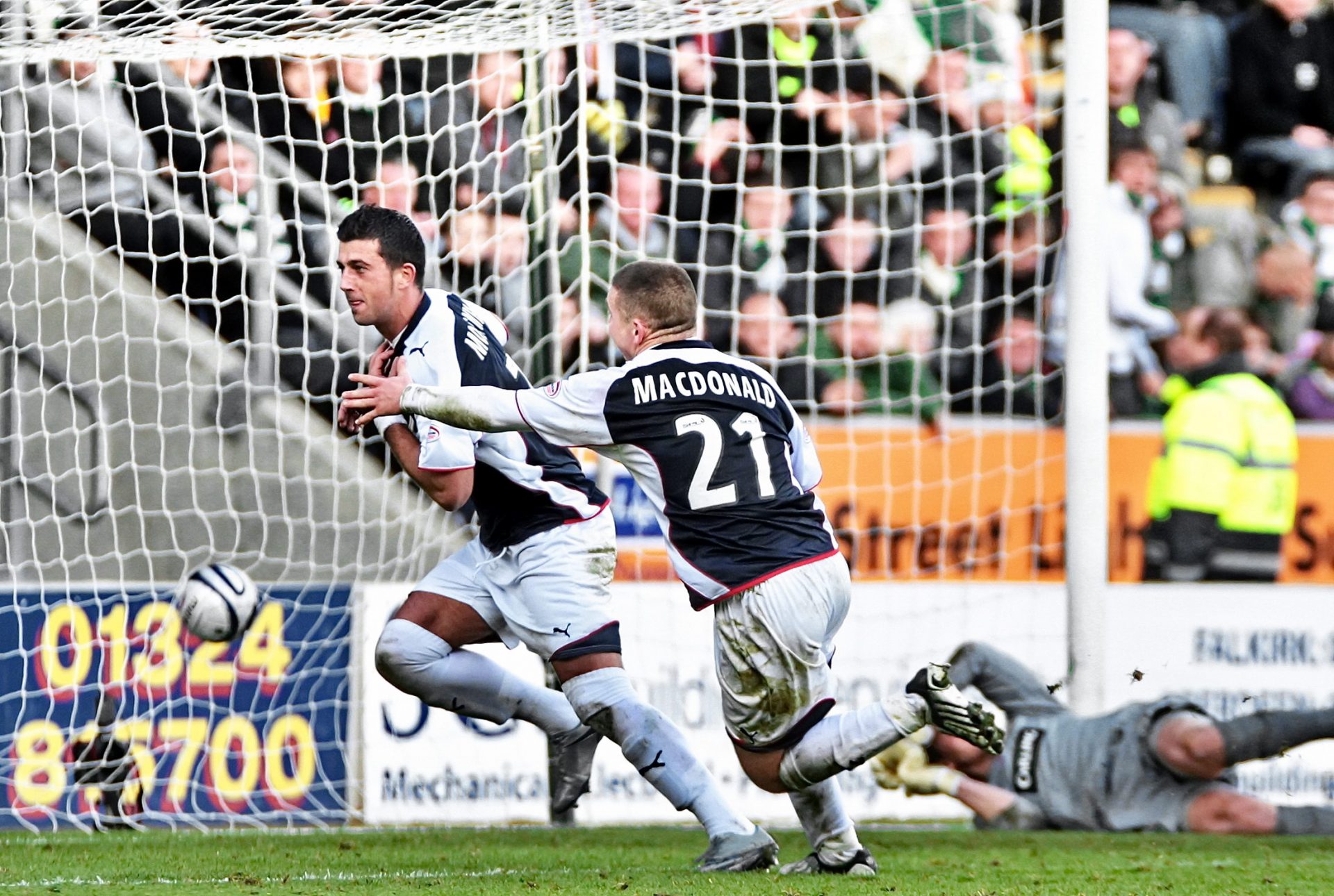 Pedro left after relegation but was to return to The Bairns for one more chapter after a season in Cyprus.

“When I returned the decision wasn’t based on money. I had other offers and better contracts, but it’s one of these things where I liked being there. I ended up buying my house and everything, that’s how sure I was I’d be back!”

“When I came back from Cyprus I was with my family in Porto, and I could’ve stayed there, but I went straight back to Scotland and stayed there for three or four months without a team because that was my home. The club will always be very special to me and given the chance to play for the club, it was never an issue.”

Pedro finished by talking about his feelings towards Falkirk, the club that has played such a big part in his career and life.

“Football has been a part of my life since I was a kid. My dad and brother love football, the support Benfica, my local club. As a professional footballer you tend to see the game and clubs slightly differently to the normal fan. What Falkirk means to me is as a professional I support Falkirk as a fan.”

“The club is the people around it, that’s what makes the difference. It’s like a restaurant, it might be good food but if the people that work there or go every day aren’t friendly people won’t eat there. It marked eight or nine years of my life and there are a lot of good memories.”

“Falkirk is my club, I worked for a lot of other clubs and they are special in their own way, but Falkirk is the club I check the scores every week. I maybe don’t get over to games very often, but it is the club that I really care about and keep in touch with a lot of people from.” 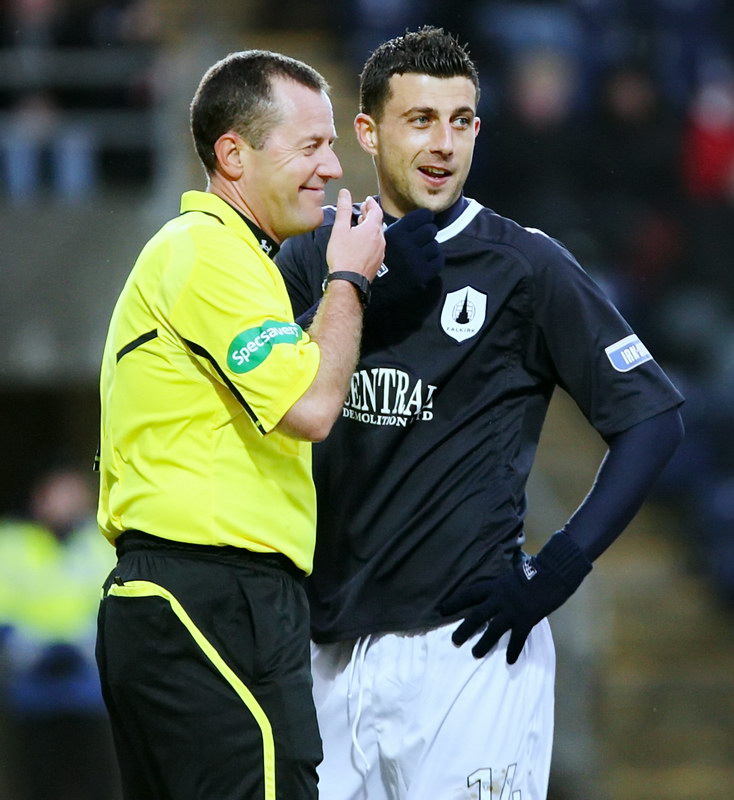