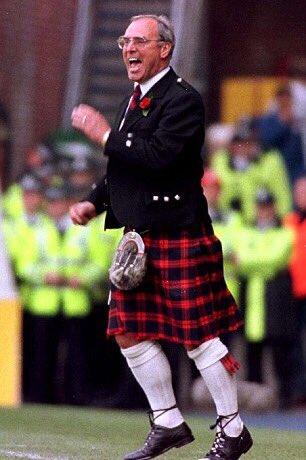 Alex began his Falkirk story standing in the Hope Street End at Brockville, learning to love The Bairns as an 11-year-old watching his heroes win the Scottish Cup in 1957. As a youngster Alex played down at Liverpool before returning to Scotland and Dundee. Alex played for rivals Dunfermline Athletic across four years before crossing over to the right side of the Forth for a spell with his hometown club. In his first of two seasons at Brockville Alex helped Falkirk to the Scottish Second Division Title before assisting his team to a seventh-place finish in the top tier the following year.

After retiring from his playing career Alex went on to manage the club on two occasions. During the first of these he took over the club in the Scottish First Division, standing in the dugout for a year and steadying the ship during a difficult time following promotion from the third tier.

Alex returned to The Bairns for his second spell as manager in 1996 when he famously led his hometown team out to their third Scottish Cup Final. Despite losing 1-0 to Kilmarnock Alex’s side made an excellent account of themselves, and he went to win the Challenge Cup and finish as runners up in the league on two consecutive occasions, only being denied a promotion play off due to Brockville not meeting requirements for the top division, during his time as manager.

Since leaving the club as manager in 2002 Alex has worked for our Commercial Department, devoting himself to helping the club even after his exit from the footballing side of things. Alex received his testimonial match for Falkirk in 2007 and has always recalled fondly sitting next to his childhood hero Alex Parker at the dinner afterwards.

As Lifetime Ambassador Alex will always be a representative of Falkirk Football Club. This recognises his massive sacrifice and dedication in promoting Falkirk Football Club across the years, as well as his many achievements while doing so. As well as taking on this new role Alex will continue in both his work in the Commercial Department and his matchday duties.

Alex said of his appointment:

“I think it’s a great honour. I’ve got to thank the Chairman and the Directors for doing this. I’ve been a supporter of the club since I was a wee boy, I was a player, manager twice and I’ve worked in the Commercial Department nearly twenty years now. It’s a great club Falkirk. The fans have been very loyal over the years and I’m delighted to be associated with the club in every department.”

“Part of the honour of being Falkirk Chairman is I have had the opportunity to get to know Alex very well. We all know Alex’s history and his strong allegiance to the club, that stretches back to when he was a boy. He’s been a Bairn all his life as a supporter, a player, a manager, and now still working with us coming up to his 75th birthday.”

“It’s a lifetime dedication to the club and we wanted to recognise that and honour Alex by giving him the title of Lifetime Ambassador. We’re delighted that Alex will be Lifetime Ambassador and I know he’s delighted as well. From the bottom of my heart I’d like to thank Alex on behalf of all of us.”