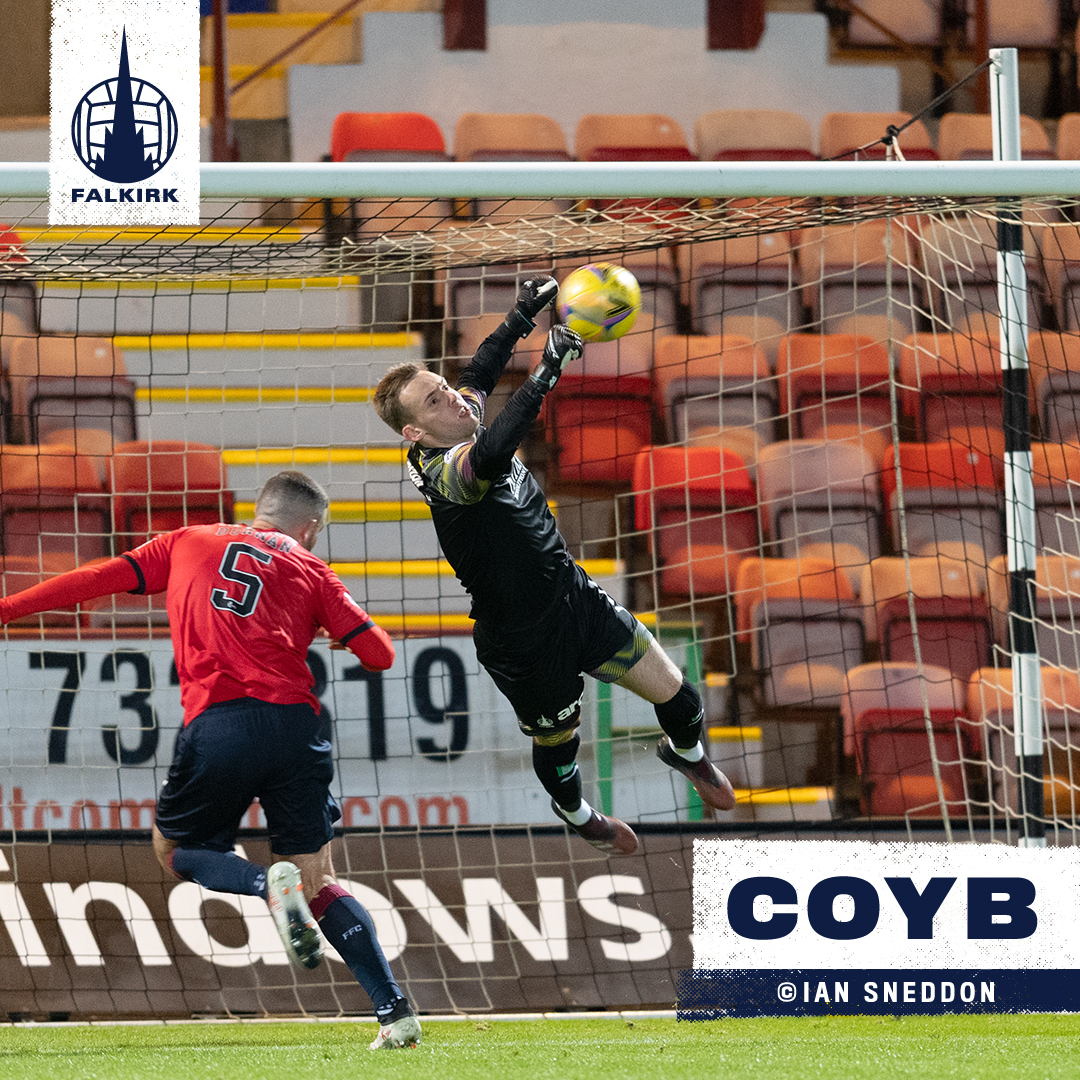 Despite a dominant first half display from the Bairns, Ewan Murray’s double proved the difference as Falkirk lost 2-0 to Dunfermline Athletic at East End Park.

There was an eerie silence around the stadium as both teams emerged from differing ends of the ground for kick off. Falkirk, playing in their red away strip, walked through the traditional away stand from their makeshift dressing area in the concourse to begin the action shooting from right to left.

The first corner of the match was conceded by the Bairns as Mark Durnan’s skewed clearance drifted out beyond the by-line. Dom Thomas’ swerving set play caused Falkirk problems with Robbie Mutch forced to save on the line and Declan McManus inches away with the follow up.

After that early scare, the game evened out somewhat and, as expected, turned into a real battle. Anton Dowds was proving a useful outlet for the Bairns in forward areas, but it was the Pars who had the next real opportunity with just under 15 minutes played. Declan McManus got on the end of a ball from the right with Robbie Mutch doing well to get low down to his right and scoop the glancing effort clear. Set plays were proving to be Dunfermline’s main source of threat, and they had the ball in the net from their next effort. At the second attempt, a low cross was sent back across the box with Kevin O’Hara knocking home, but referee Grant Irvine blew for a foul on Robbie Mutch in the build-up.

Falkirk’s first shot at goal came on 23 minutes. Robbie Leitch did well to retain possession in midfield before threading a low ball to Callumn Morrison. The winger’s low cross was cleared to Morgaro Gomis on the edge of the box whose low drive was deflected and looked to be heading for a corner, but for some quick feet and good handling from Owain Fon-Williams.

The Bairns kept the pressure on and had another strike at goal just seconds later. Space opened up for Aidan Keena around 20 yards from goal and the number 9 took full advantage as he looked to bend an effort into the far corner, but his strike went wide into the stand without causing the Pars too much trouble.

Those opportunities certainly turned the tide on the possession stats with the Bairns looking in control of play as we hit the 30-minute mark. Falkirk’s best chance of the half came during this spell with Callumn Morrison sending a delightful cross into the danger area which Aidan Keena headed towards goal. It looked certain to be the opener on connection, but Fon Williams did well on the line to keep the ball out and the score level.

Lee Miller and David McCracken urged their side to keep the pressure on and they did just that. Robbie Leitch powered an instinctive strike towards goal that was well saved, before driving down the left and winning the Bairns their first corner of the match. The Pars were penned in by this stage and Dowds’ strike cannoned off Watson and to safety. Morrison showed good feet on the right again to get a yard of space and deliver a ball into the box that Keena was inches away from connecting with.

As half time approached, Declan McManus showed a burst of pace to race onto a long ball forward that left Ben Hall with no choice but to bring the front man down on the edge of the box. Dom Thomas stepped up to hit a freekick towards the target that was pushed round the post by Robbie Mutch. From the resulting corner Paul Watson drilled a strike towards goal that was well saved by Mutch.

Following that brief flurry of activity in the Falkirk goalmouth, the Bairns came back into the ascendency. A corner from Callumn Morrison was flicked towards goal by Ben Hall – his effort appeared to strike a Dunfermline hand, but the referee and his assistant on the far side were unmoved despite strong claims for a spot kick from the Falkirk team and dugout.

The Pars had the final opportunity of the half as Dow got clear on the right, but Mutch was as assured as ever to race from his goal line and deny the former Dundee United midfielder.

Dunfermline got the second half underway with the Bairns shooting from left to right towards the traditional away stand. Ewan Murray had the first strike of the half just seconds in as he fizzed well over the bar from around 25 yards.

Similarly to the first half, the Pars started the better of the sides. A good run in behind from Kevin O’Hara saw him through on goal, but Durnan and Hall recovered well with the latter marshalling the former Falkirk man out of play. O’Hara again went through just moments later as he raced onto a long ball forward, but Robbie Mutch was equal to it and pulled off a good save to keep the score level.

Just before the hour mark the Pars took the lead. Dom Thomas delivered a deep freekick from the left which evaded the Falkirk defence as Ewan Murray headed home at the back post. Lee Miller and David McCracken responded with their first substitution of the match as Josh Todd replaced Robbie Leitch. It was a straight switch with the midfielder coming on to the left wing for his first action since March.

Dunfermline’s set plays continued to cause the Bairns problems and they doubled their advantage from a corner kick with around 25 minutes to play. It was Dom Thomas again who delivered to the back post and Ewan Murray was on hand to head home his second of the night despite the efforts of Ben Hall on the line.

Akeel Francis was introduced for Aidan Keena on 70 minutes as the Falkirk management team searched for a route back into the match. Chances came at a premium in the final quarter with the hosts content in retaining possession and frustrating their opponents in the process.

Declan McManus had a strike from distance as he looked to secure the victory for his side, while Conor Sammon replaced Anton Dowds in Falkirk’s final substitution of the night.

It was a first half full of promise, but a second that the hosts controlled as the Bairns lost out in their first competitive match of the campaign.