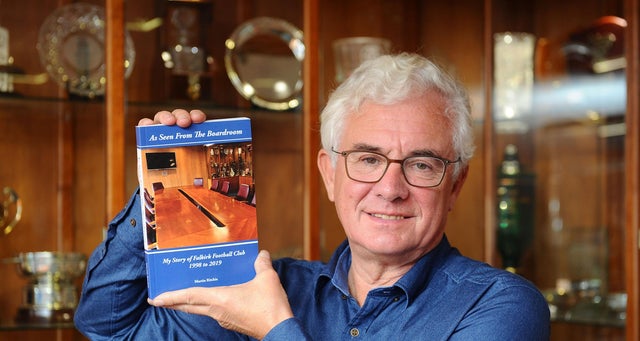 There is no shortage of books, podcasts and DVDs about Football, but very view give a view of events from the perspective of a director or chairman.

Fans rely on getting much of their information from radio and television, newspapers, social media and all too often on rumour and gossip. A new book, written by former Chairman Martin Ritchie lifts the lid on events behind the scenes, and gives a very frank, open and honest account of the period from 1998 to 2019. Falkirk fans will be intrigued, fascinated and, in some cases, astounded by the revelations at what actually happened during Martin’s period at the club. It is real roller-coaster ride from  June 1998, when the consortium of local people saved Falkirk Football Club from going into liquidation, to the disastrous relegation from the Championship and the Falkirk  fans demanding change.

The book talks more of financial results than football results and more of management than players. It offers a unique insight into the challenges that face provincial clubs like Falkirk, and into the relationships with the football authorities, the councils and, above all, the supporters. Throughout the pages, it becomes obvious that this is no cold, clinical analysis of finances, accounts and projections, but a passionate and heart-felt story as seen by a real Bairns supporter, who just happened to be a director and chairman. The highs of the two Scottish Cup Finals and semi-finals contrast starkly with the lows of the relegations and the stark reality of finding the club in the third tier of Scottish Football.

For many Falkirk fans, the most intriguing chapters will be those covering the period 2017 to 2019, when as Martin says, “Everything Went Wrong.” This is the part of the book that describes the disasters of the Paul Hartley and Ray McKinnon tenures and illustrates a genuine personal sadness and profound sense of regret at these events.

“From the window of Steven Jackson’s car, I saw twenty-one years of my life cast aside with little to show for the time, commitment and money I had given to the club.”

When subsequent volumes of the club’s history are written, Martin Ritchie’s personal contribution will be better understood, and the painful lessons that he has learned and shared in this book should be compulsory reading material for any new or aspiring directors or club administrators. There are plenty of pointers in how to define the football manager/director relationship, the crucial importance of effective and professional recruitment of managers and players, and the need to align aspiration and ambition with financial reality. The book has some fascinating insights into what many fans had heard about in rumours, but were never in the public domain, and above all a genuine desire to ensure that the mistakes that were made need to be understood, analysed and never again repeated. The book ends with a realisation that there was a need for change and that the era of the 1998 consortium had run its course.

“This was now the perfect storm. The team were failing. The football changes hadn’t worked. The board were seemingly out of touch. The board had rejected fan ownership. The club was going nowhere.”

It was a real shame that it all ended so badly, and that many of the achievements of the 1998 consortium might be forgotten. The book should ensure that a balanced appraisal of their inheritance, achievements and legacy will be possible. It is unlikely that such an open and honest account of life in the boardroom will ever be available to Falkirk fans again.

The book can be bought from the Falkirk Football Club shop at The Falkirk Stadium.  It is also available in the town centre from Retson’s Barber Shop, 32 Manor Place, Falkirk.  It is priced at £10.99 with any profits, and a minimum of £1 per copy sold, going to the Chris Mitchell Foundation and to the Falkirk Foundation.