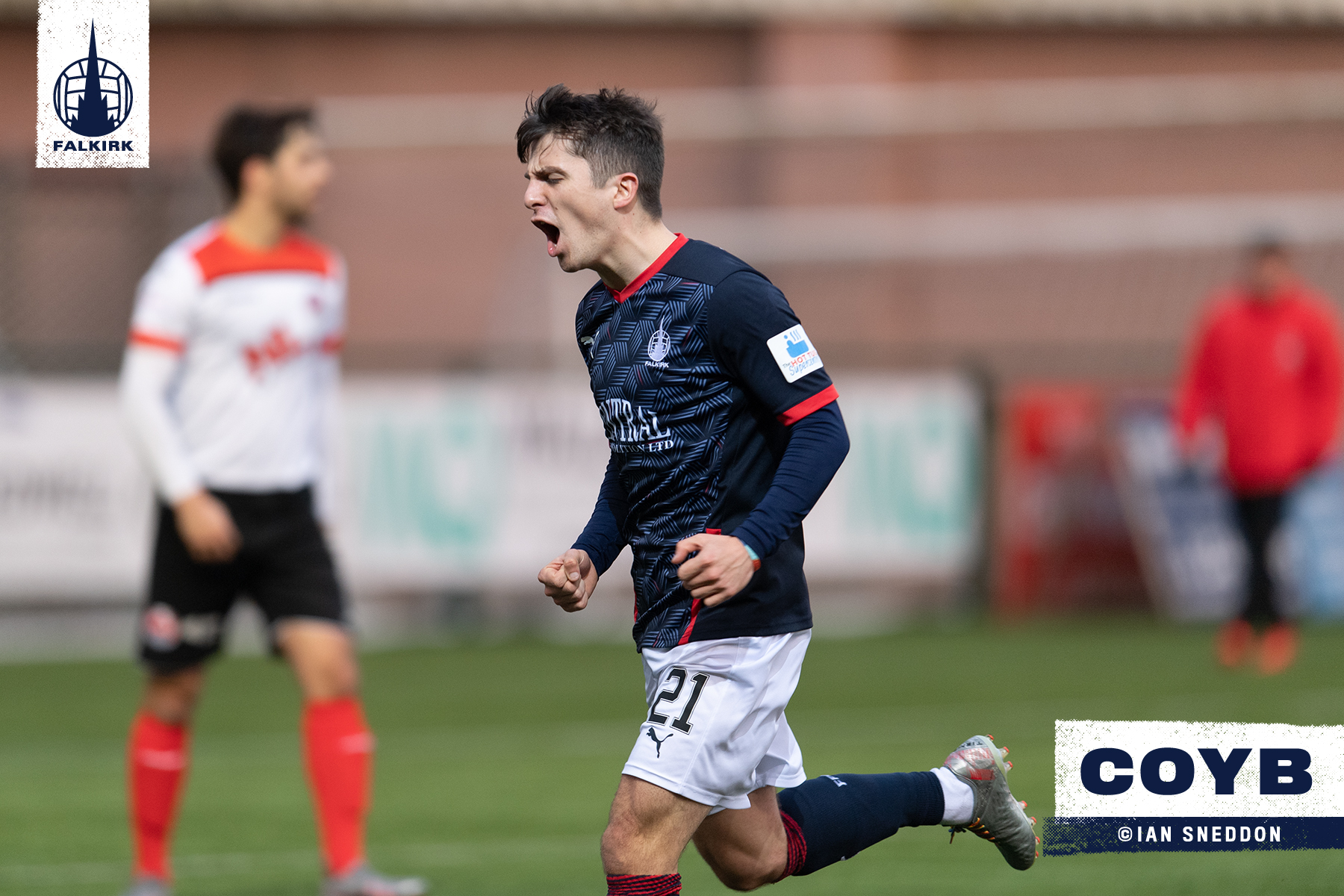 Falkirk put a ghost of last season to rest with a comfortable victory over Clyde to extend their unbeaten streak and their lead at the top to six points.

The game got off to a scrappy start with the home team showing their physical style of play that we have come to expect. Neither team could get a foothold in the game and much of the first half was to-ing and fro-ing with plenty fouls going either way.

The first real chance of the game fell to Falkirk who began to control more of the possession. Sean Kelly played a long ball over the top for a running Aidan Connolly who managed to put a cross into the near post area but Anton Dowds couldn’t get enough on it and the chance was lost.

Callumn Morrison – who didn’t put his usual mark on the game – saw the next chance come his way as he met another Connolly cross with his head, but his shot landed tamely in the keeper’s gloves.

Falkirk kept the pressure on and were rewarded ten minutes later with a goal. Ben Hall played a long ball from deep and found Conor Sammon who used his physicality to head the ball back to Charlie Telfer who made some space for himself and found the bottom left corner with a driven shot from 20 yards.

Clyde looked to get back into the game and began to make more attacking inroads. 15 minutes later it looked like Clyde had found their way back into the game after David Goodwillie found the net with a header from a dangerous cross but the linesman dashed their hopes by raising his flag for offside.

The Bairns didn’t sit back and came close soon after when Conor Sammon knocked a long ball down to Aidan Connolly who drove towards the box and tried his luck from range, but his effort flew just over the bar.

Clyde again came agonisingly close to an equaliser through a corner right before half-time. David Goodwillie got his head on the ball from six yards and much to the relief of Mutch, the ball went inches over the bar.

Falkirk came out from the break looking a different team from the first half, dominant from the whistle and putting controlling the lion’s share of possession.

The visitors put the home side under constant pressure and won a series of corners that Charlie Telfer continued to dangerously whip into the box. Then it was Aidan Connolly’s turn to deliver the ball into the area from the opposite quadrant.  This time the ball found Scott Mercer who headed home his first goal for Falkirk, and Falkirk’s second goal of the afternoon.

The boys in navy blue continued their dominance, looking even more dangerous after their second goal and just four minutes later they had the ball in the net for the third time.

Aidan Connolly swung in another fantastic corner resulting in a scramble in the area. When the ball broke, Ben Hall was waiting to knock it past the keeper.

Despite dominating and defending solidly, Clyde managed to craft themselves couple of clear cut chances, the best one falling to the one player Clyde would want it to fall to.

The first chance came when Lang found himself with some space just inside the box. He sent a well struck effort towards goal but Robbie Mutch was on hand to pull off an excellent save.

Goodwillie was then gifted with a free shot on goal after Kristoffer Syvertsen picked the ball up in his own half and ran all the way to the edge of the box before picking out the home team’s number 9 whose first time shot flew over the bar.

Falkirk cruised to the full time whistle without much fuss. Morgaro Gomis floated a ball across the box to a waiting Josh Todd who played the ball first time back into the box but substitute Robbie Leitch was outnumbered and the danger snuffed out.

Goalscorer Scott Mercer put any hopes of Clyde getting a consolation goal to bed after putting in a goal saving slide tackle in the last minute.

Despite a scrappy start, the Bairns were dominant throughout the second half to keep their unbeaten run going and extend their lead at the top of the League One table to six points.