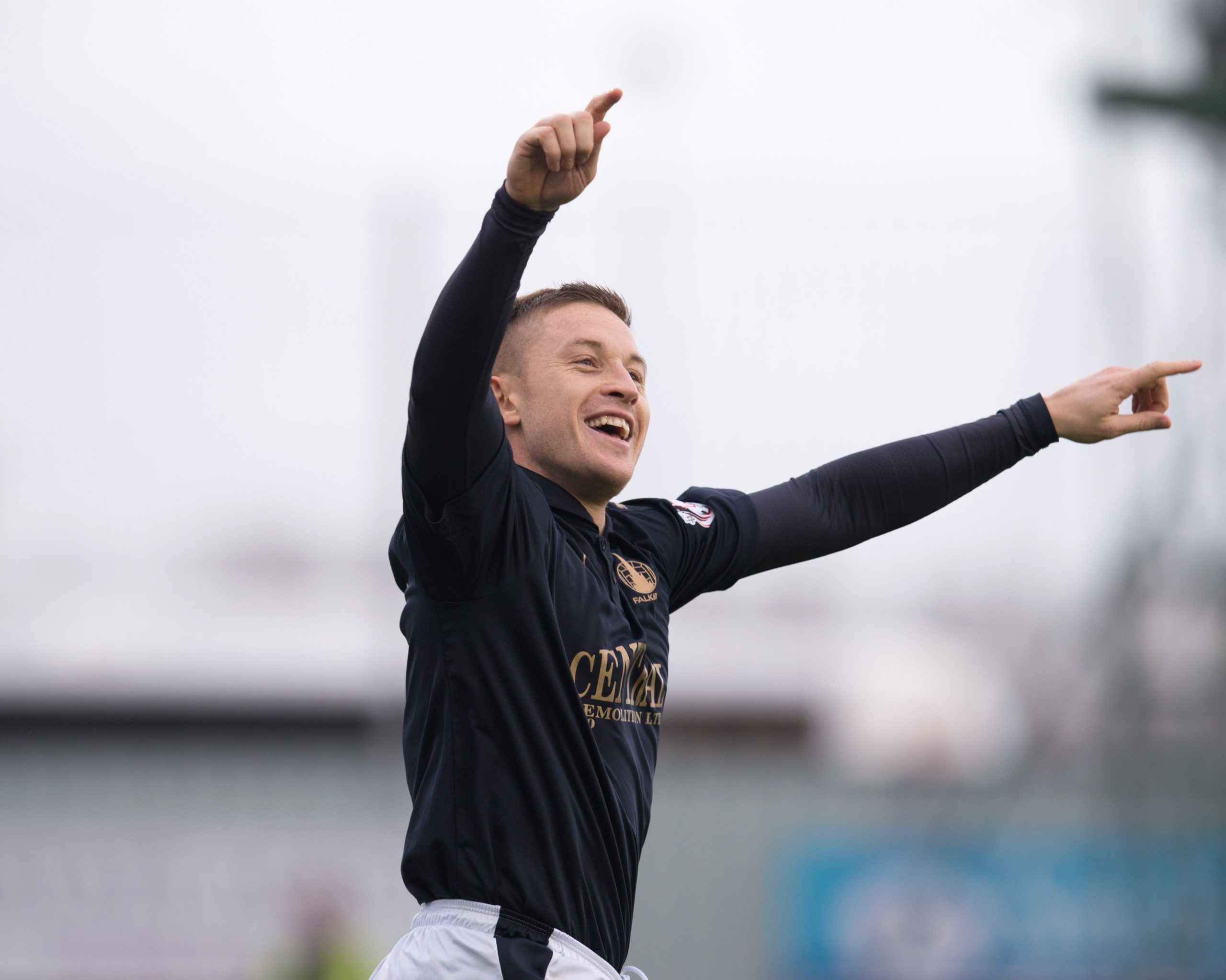 We spoke to former Bairns striker John Baird on his several years at the club, across one of the most successful periods in recent times, and his current life after moving to Australia last year!

The frontman joined The Bairns after a spell at Queen of the South that didn’t quite work out, following Queens teammate Mark Kerr.

“I went to Queens and played, but Jim McIntyre left to go to Ross County, which wasn’t great, and James Fowler came in, and it didn’t really work, then me leaving materialised quite quickly. My wife was pregnant, I didn’t have a club to go to and I had 18 months left, but I just told them to rip it up, it really wasn’t a place I wanted to be anymore.”

“I’d played against Falkirk with Queen of the South and the manager was quite impressed with me, then we played against Rangers and I think James, the Assistant Manager, liked what he’d seen. When you’ve got a couple of guys in a club that like you, it’s quite easy for everything to get done.”

“Mark Kerr got out on the Monday and went and signed with Falkirk. Houstie asked Kerzo and he told him I’d be out the next week, so he phoned me and asked me what I wanted to do! We were on a not bad wage at Queen of the South, he said he couldn’t offer me that, but he said he could give me what Kerzo was on till the end of the season and we’d sort out next year if I did well. In the end I signed for six months on less money than I was at Queen of the South, and I had eighteen months there!

After a torrid time off the pitch at Queens The Falkirk Stadium was a welcome change, and a contract extension soon meant that John felt quite at home!

“I always went into Falkirk to play and saw the boys all in suits and the big stadium, it was a well drilled setup and was well placed for travel, so I couldn’t be any happier when I signed. I started well and five or six weeks later Houstie told me he wanted me to stay on for another year and we got it done straight away!” 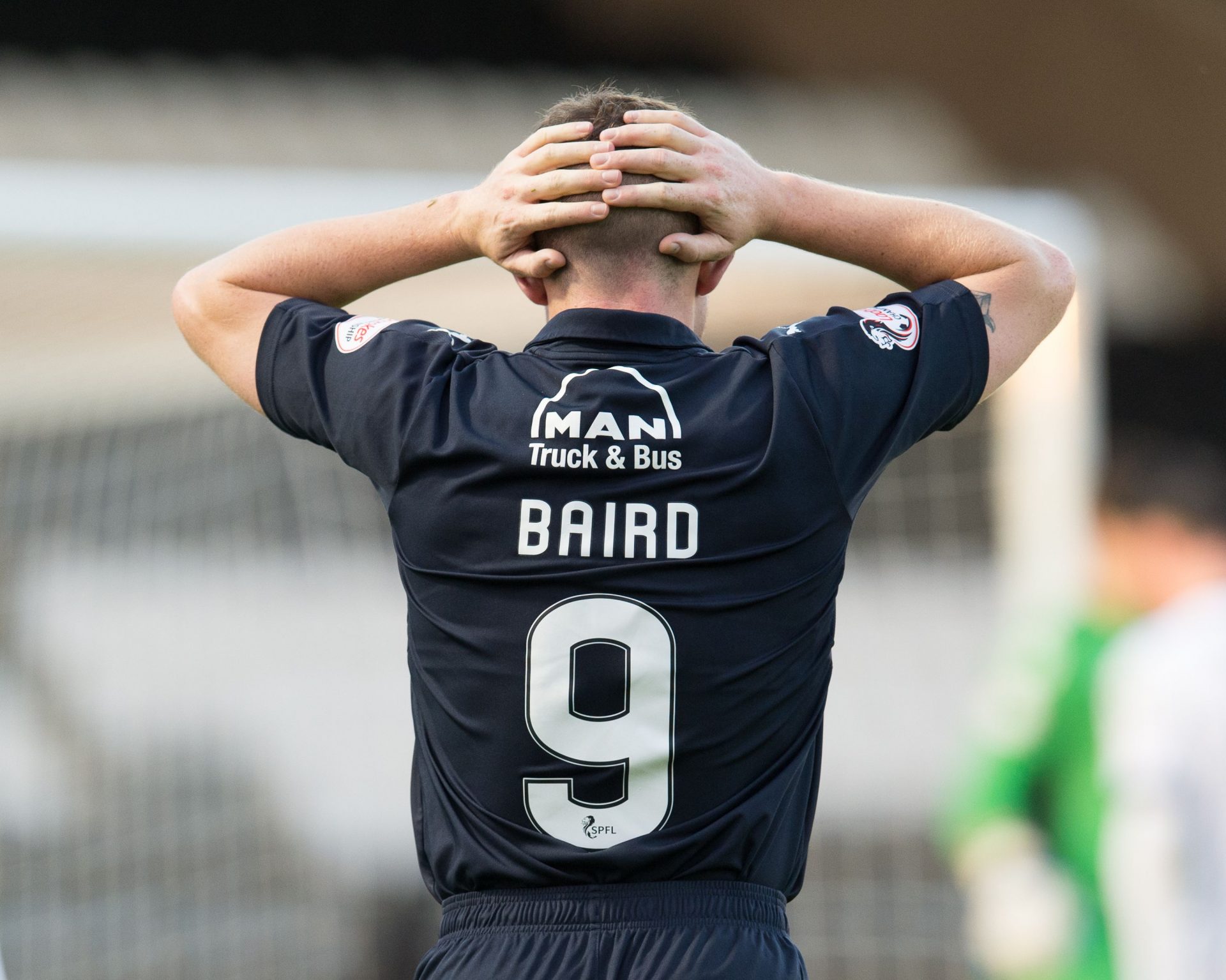 The striker’s debut came at Easter Road, and a goal soon followed, although it could have been even better if not for a combination of honesty and Willie Collum!

“I remember Mark Kerr saying to me that the team wouldn’t change from beating Alloa on the Saturday before, but the Gaffer flung me right in to play Hibs! I scored a header, and I actually scored a second from a free kick after I chested it in. We got given the goal, and the referee said that it was onside, but asked who scored it. I claimed it as my goal and he gave it as offside, I was too honest!”

“We came in at half time and Houstie went mental saying it wasn’t my goal and I shouldn’t have tried to claim it!”

The good start continued, and Bairdy soon calmed Peter Houston down with excellent performances and a number of goals before the end of the season.

“We beat Hearts away from home as well a few games later, so it was a really good start and the beginning of things to come. We beat Hearts after they hadn’t lost all year. I scored a penalty, then Rory Loy scored a cracker, and wee Sibbald scored a belter as well. It was a great day and up there as one of the best; but saying that there were some great times at Falkirk!”

The Bairns reached the Scottish Cup Final in 2015, as we saw in our Road to the Final programming from two weeks ago. John’s name was missing that day despite his excellent start in the navy blue, with 15 minutes against a Highland League side when he was at Queen of the South seeing him cup tied!

“I played fifteen minutes against Brora Rangers, and that meant I couldn’t play for Falkirk in the Cup Final, I was raging! The good thing was we beat Queen of the South on the Friday night on the tele, me and Kerzo went down and got absolute dog’s abuse in the main stand!”

“I accepted when I went to Falkirk that I couldn’t play in the cup, so I never had any jealousy about it. I didn’t look at it as a negative that I wasn’t playing in the Scottish Cup, I saw it as a positive we might get to play in Europe. Houstie was brilliant, I was the best man for my mate’s wedding and the stag do was the week leading up to the Cup Final, but he still told me to go!”

“I didn’t even get to go to the final as well, because my wife was in labour! I was watching the game in the hospital with her while she was getting ready for surgery! It was the start of a successful couple of years for Falkirk and it really led it.” 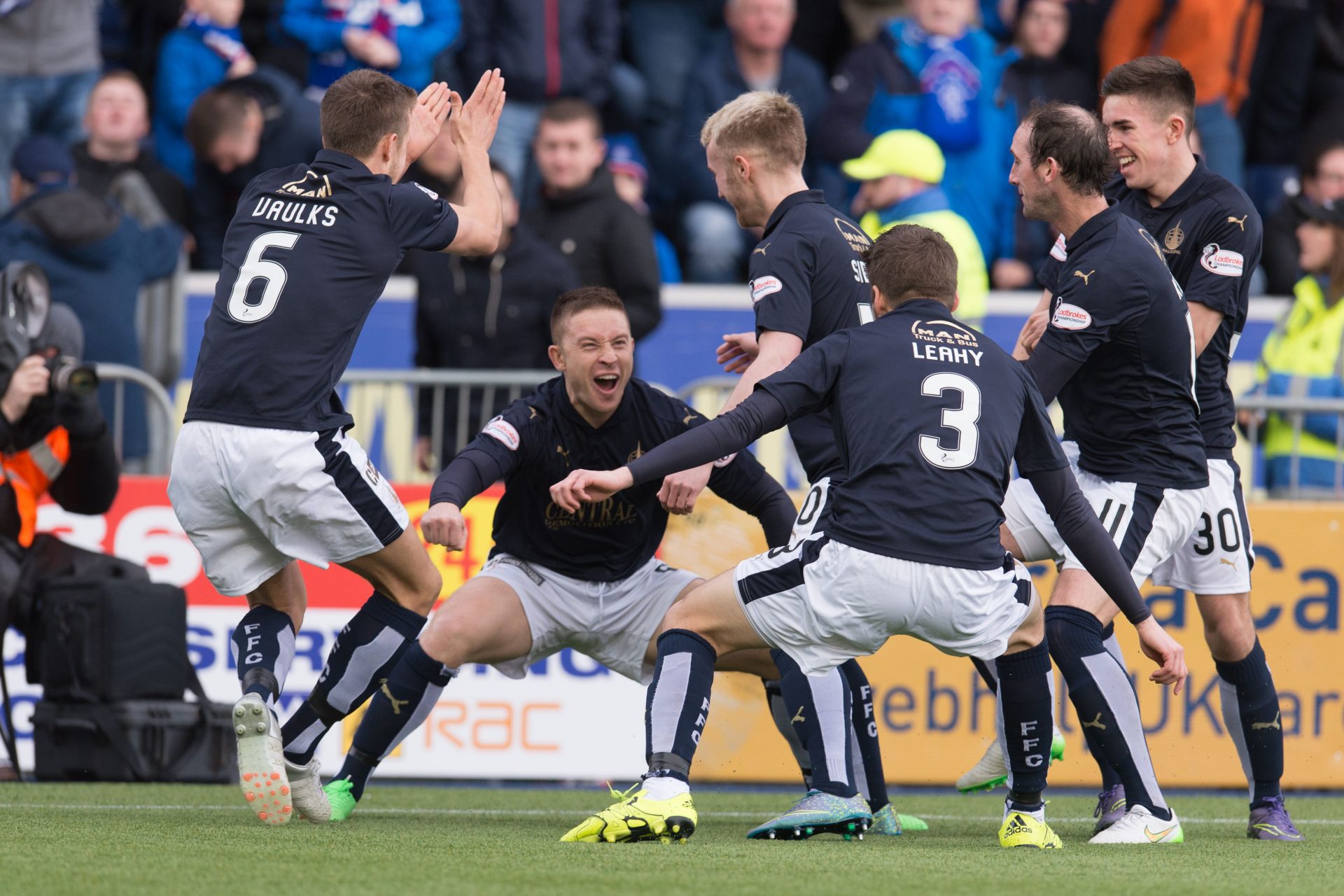 The 2015/16 season saw Peter Houston’s side kick on from their Cup Final defeat, with John leading the way in a campaign where he hit the back of the net 19 times. He reflected on the year that saw Falkirk split two giants of the Scottish game and win against both multiple times.

“You had Hibs and Rangers in the league, but we actually only lost four games that season, even Rangers got beat five times! That season was probably better than the Premier League with the teams in it, then we went toe to toe with them and pipped Hibs to second place.

“Especially for the budget we had we massively overachieved that season, I sometimes don’t think people appreciate how good we were, because if Rangers and Hibs weren’t in that league, we would’ve absolutely walked it!”

“I remember the night game at The Falkirk Stadium that Rangers looked like Barcelona in the first half, it was going on about 6-0 and we came back and beat them. That was just ridiculous!”

The Bairns reached the finals of the Premiership playoffs in dramatic fashion, defeating Hibs in the dying seconds, and won the first leg of the final against Kilmarnock with similar late heroics. Despite all they had accomplished the second leg at Rugby Park proved a game too far for John and his teammates, losing comprehensively to the Ayrshire side at the final hurdle.

“After the Kilmarnock game was heart-breaking. To be 90 minutes away and be so close to doing it, I think if we got through the first 10 or 15 minutes, we would have been alright, but we didn’t get the time to grow into the game. They were massive and powerful, and we just had no legs left. It was one of the ones that got away. I always remember the fans were brilliant that day, even the warmup!”

The following season Falkirk once again defied the odds to split two clubs with far bigger wage bills, this time Hibs and Dundee United. However, changes to the playing squad and an earlier exit to United in the playoffs meant the side never quite hit the highs of the years before.

“I thought we huffed and puffed a bit all year. We did the business when it needed to be done, but the playoffs summed it up for us. We lost some players, especially Will Vaulks, he used to pull the Edinburgh and Glasgow sides together and things like squad golfing eventually stopped after he left, and some of the players that came in struggled.” 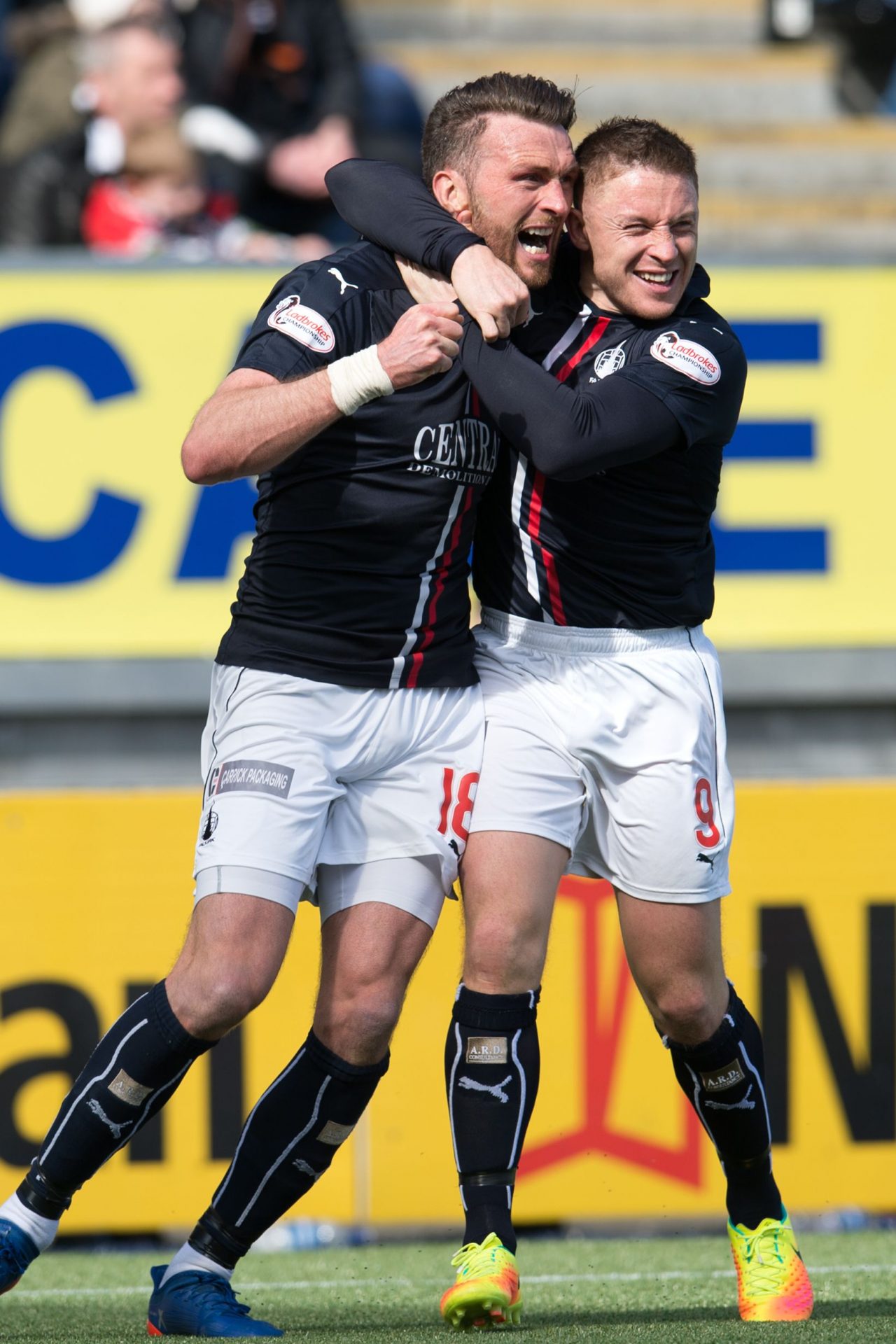 At the end of the 2016/17 season John departed The Falkirk Stadium for Inverness. He talked through the decision to leave the club after an extremely successful two and a half years.

“It was an amazing time, but I knew it was time to go. I had my daughter that summer, so my wife was on maternity leave, and I felt like I had to look after my family. I spoke to Peter Houston and he told me he’d be retiring at the end of the coming season, and that meant I only had a year left because the experienced ones are usually the first to go with a new manager.”

“I got a good contract and a house up at Inverness, so it was right for my family at the time, but football-wise I regret it. I would have liked to stay at Falkirk, and I hope I could’ve helped the manager.”

Despite leaving Falkirk when he did, John still holds both Peter Houston and the club in very high regard for one of the favourite periods of his career.

“I loved working for Houstie, he knew how to work me and really got the best out of me. When you think about it, he was ten minutes and extra time away from probably winning the Scottish Cup, ninety minutes away from promotion and a last-minute goal conceded away from the play off final again! Looking back did a really excellent job.”

“It was one of the best times I’ve had, up with Raith because of the affinity I’ve had with them over the years. For two and a half years, consistency wise, Falkirk was absolutely brilliant for me and I probably had the most productive time of my career at the club.”

Since leaving Inverness in The Highlands, John spent time as a player-coach at Forfar Athletic and re-joined Raith Rovers for a brief spell before making the move to the otherside of the world, emigrating with his family to Australia.

“The football is good! Last year was a bit difficult because I came out of a four month lock down and started playing straight away, so I wasn’t match fit. We’ve been doing games and preseason and it’s going well, the 19th of February the League Cup starts and hopefully we can get into that!”

“The manager’s brought a good side together and we’ve got a good chance to do well and maybe win the league. There’s a lot of growth in Australia, especially in Perth, where I’m staying, and it can only be good for the academy I’m helping run here!” 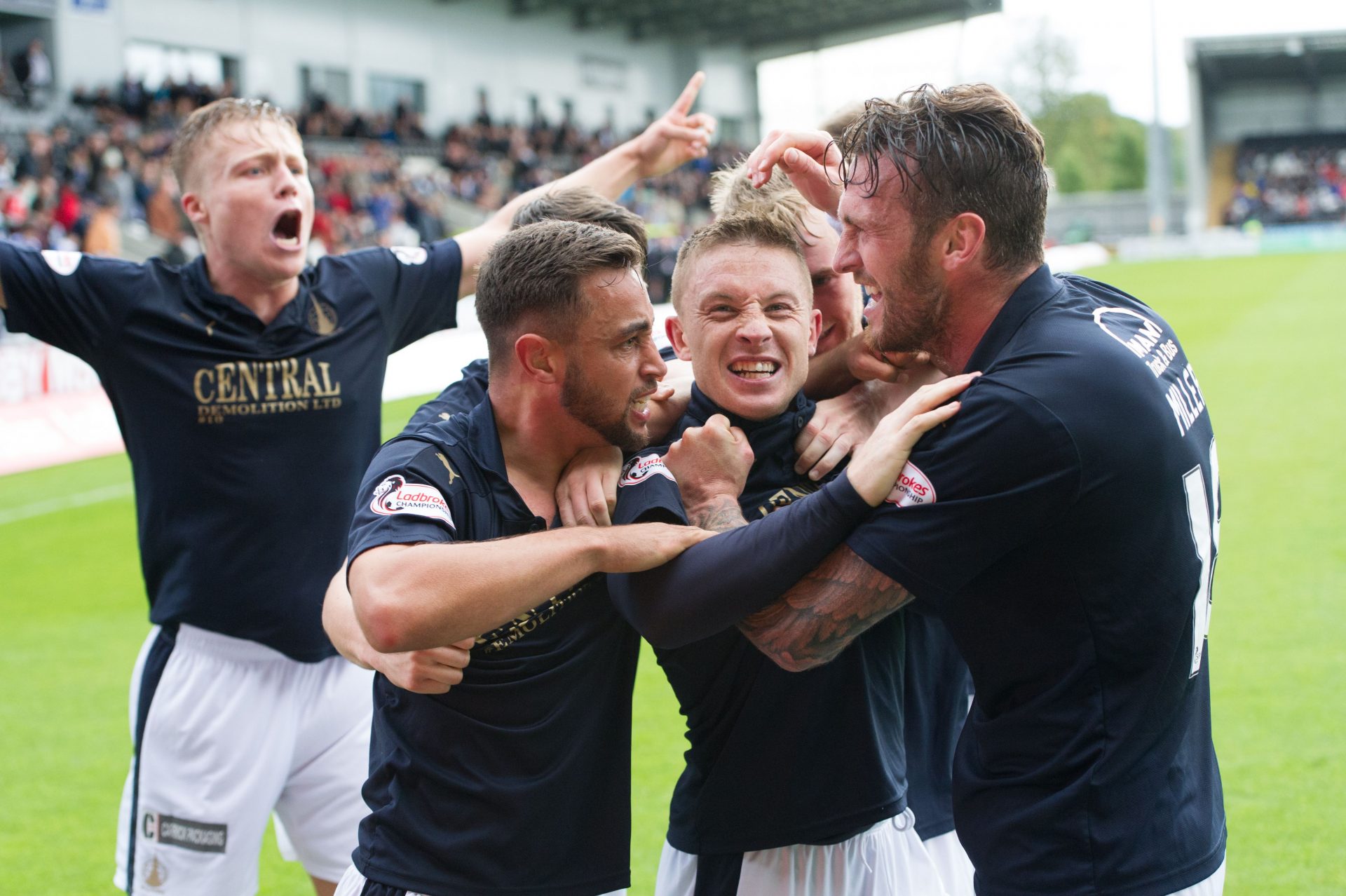