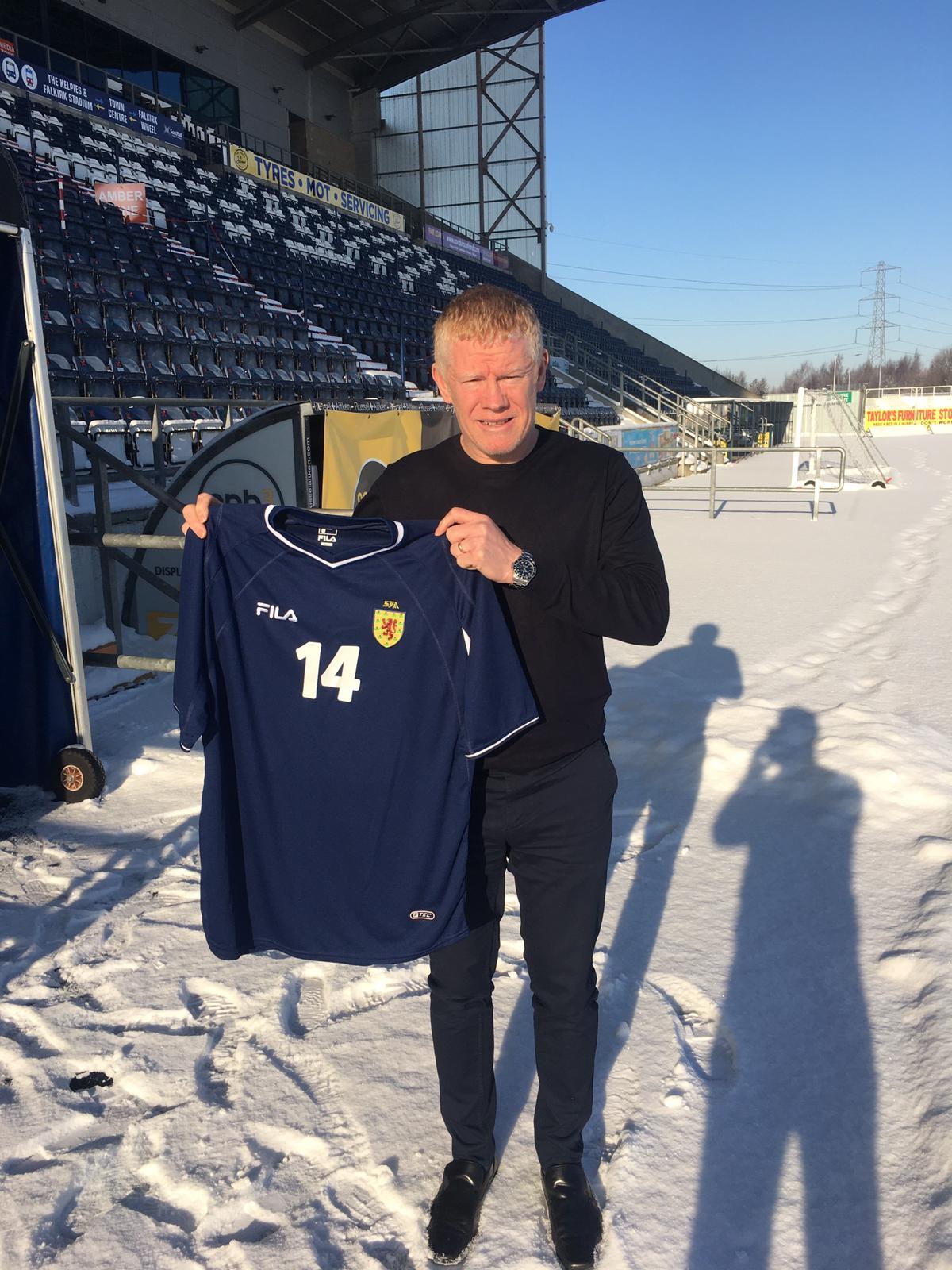 For this week’s 50/50 second prize we are delighted to present a match worn Scotland top signed by our new Sporting Director, Gary Holt!

The top has been given a bespoke frame by our partners at Fanatikool that features a Scotland theme and includes the official Falkirk FC tartan. This unique piece of memorabilia is only available through our 50/50, so buy your tickets here!

To mark this excellent second prize we spoke to Gary on his memories playing for the national team, for whom he played ten times between 2000 and 2004.

Gary made his debut for Scotland as a late substitute in a 1-0 win against Latvia as Craig Brown’s side attempted to qualify for the 2002 World Cup:

“I’d been in a couple of squads beforehand, but not got on the pitch. Latvia away was the first game of the qualifying campaign and to be fair to them they gave us a much harder game than we thought!”

I didn’t think I’d get on, so when I got the nod from Craig Brown it was brilliant. It was only for a short space of time towards the end of the game, but it didn’t matter. If you put me on for one second or ninety minutes, you’d see my enthusiasm and a smile on my face! It’s something that I’ll always live with.

Gary’s only international goal came in a 4-1 win over Trinidad and Tobago in a Friendly Match at Easter Road in 2004. He talked us through scoring for the national team for the first time:

“It was a clearance from a corner or a freekick that was cleared back out, and I made a blindside run that Darren Fletcher found perfectly. I could see the keeper coming and thought ‘I’m going to get hurt here!’. As many people would tell you I’m quite happy to get hurt for the cause, so I threw myself at the ball just as he threw his fist at the ball. I got there first, but then his fist connected with my face!”

“The ball and the run were perfect, and to be fair to the keeper I don’t think he saw me diving in to get the ball, he thought he could just punch clear. It was a blessing in disguise that I was lying crumpled on the pitch as I didn’t need to celebrate, because who knows how uncontrollable I would’ve been!”

When asked about his feelings on playing for the national team, Gary was able to sum it up in just one sentence:

“I didn’t think I’d get to play for my country, I always dreamed about it. To wear the jersey and even score in a game is something that I’ll never forget.”

Gary finished by discussing the 50/50 and the important funds it has brought into the club over the course of the pandemic:

“I’d like to give a heartfelt thank you to each and every support that has bought a ticket, to have so much investment and support from the fans in these difficult times is brilliant. I had a good time with the supporters when I was here as a manager and I can’t wait to get back to seeing them back at the games, it’s a big thank you from me for everything they’re doing.”

“I had a lot of interaction with Jean when I was at the club previously. I can’t wait to see her again, to give her a hug when the time is right, and to thank her for everything she does for the club.”

To be in with a chance of winning our fantastic second prize visit https://www.falkirkfc.co.uk/50-50/ to buy your tickets now!