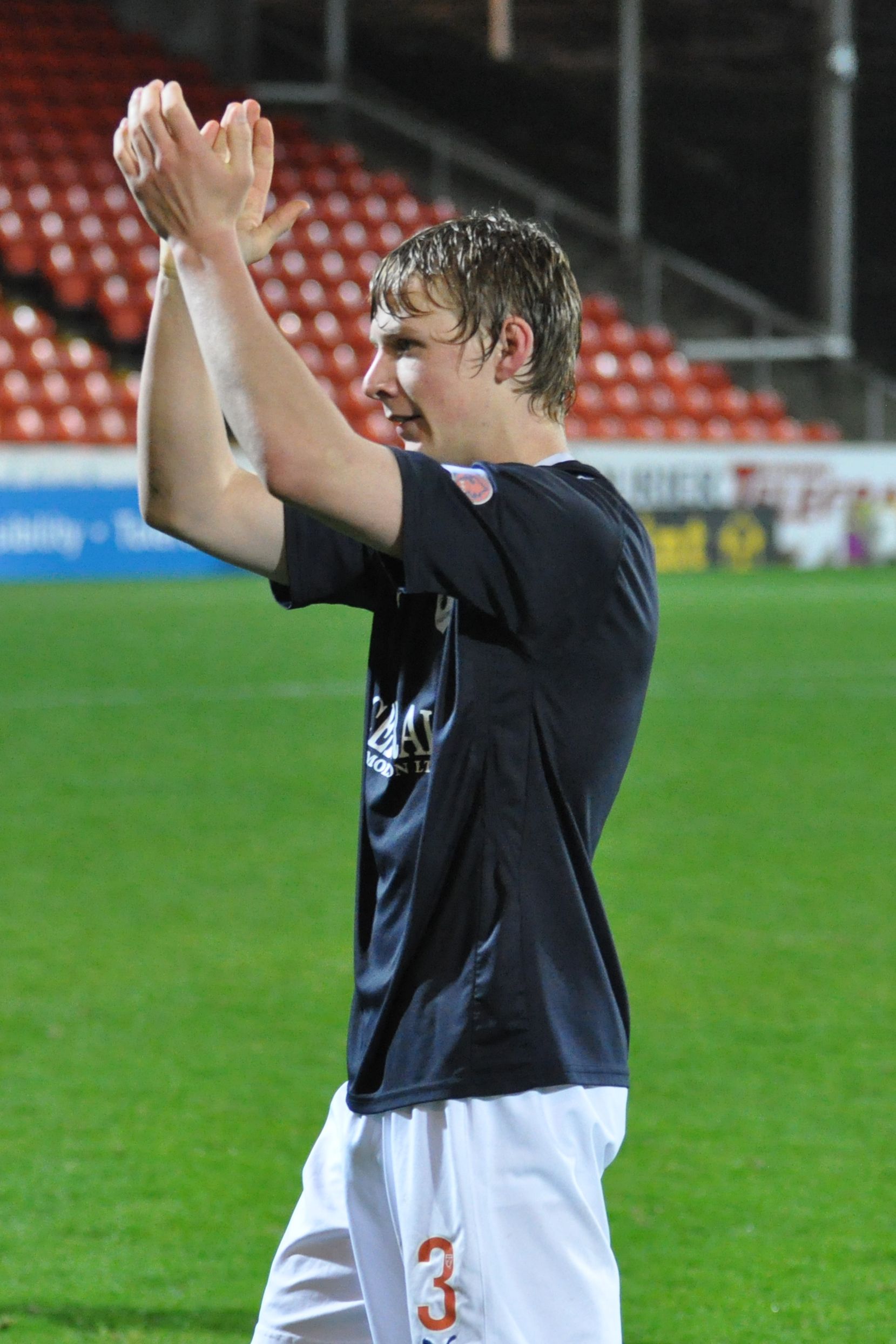 Lewis Connolly spoke to former Bairn Stephen Kingsley about his ultimate squad of Falkirk teammates from his time at the club!

The progress of Stephen Kingsley is something that Bairns fans can sit back, look at and have a smile on their face with pride. A product of the club’s successful youth academy, they watched on with interest as the ex-Bairn strutted his stuff with Swansea City in the English Premier League and earned a Scotland Cap with the international squad in 2016.

Stephen joined the club via the Falkirk Academy at a young age and through his hard work he rose through the ranks before breaking into the first team. Stephen made his debut in season 2010-2011 when he secured his first First Division start and two further league substitute appearances, he also chalked up two starts in Stirlingshire Cup games. Falkirk were to finish third that season, behind Raith Rovers and league winners Dunfermline.

He continued to provide competition for places the following season and racked up another 17 appearances for The Bairns, split between 10 starts and 7 substitute outings in all competitions as Falkirk again secured third place.

Tam Scobbie had chalked up 76 appearances for Falkirk as the regular left-back throughout the two seasons mentioned above. His departure to St. Johnstone at the end of season 2011-12 opened the door of opportunity for Kingsley though, and the Falkirk Academy graduate wasted no time in cementing his place in the starting eleven and making the position his own for the next two years.

Although predominantly used as a left back, Stephen was a versatile player for Falkirk, and this saw him feature occasionally as a left-sided central defender or even further up the park with some of the Scotland youth squads.

Stephen’s strength was his consistency of performance and the fact that he undoubtedly played with a maturity beyond his years. He quickly became regarded as a reliable and dependable player who contributed to the team performance in both an attacking and defensive capability.

Stephen’s abilities were recognised when he was given a place in the SPFL Championship team of the year for 2013-14 and, such was the trust put in him by Falkirk, by the time he was only 19 years old he had already amassed 100 first team appearances.

Such progress understandably wouldn’t go unnoticed for long and in the summer of 2014 English Premier League side Swansea City swooped to take the youngster to Wales. Following a year in the development side down at The Liberty Stadium, Stephen made his breakthrough during season 2015-16 with 4 first team appearances and more than tripled that the next season as he pitted his wits against the best the Premiership had to offer. Nowadays he is showing his talents at Tynecastle with a Hearts side who are looking to return to the top flight. He is fondly remembered by Falkirk fans, who view him as “one of our own”. 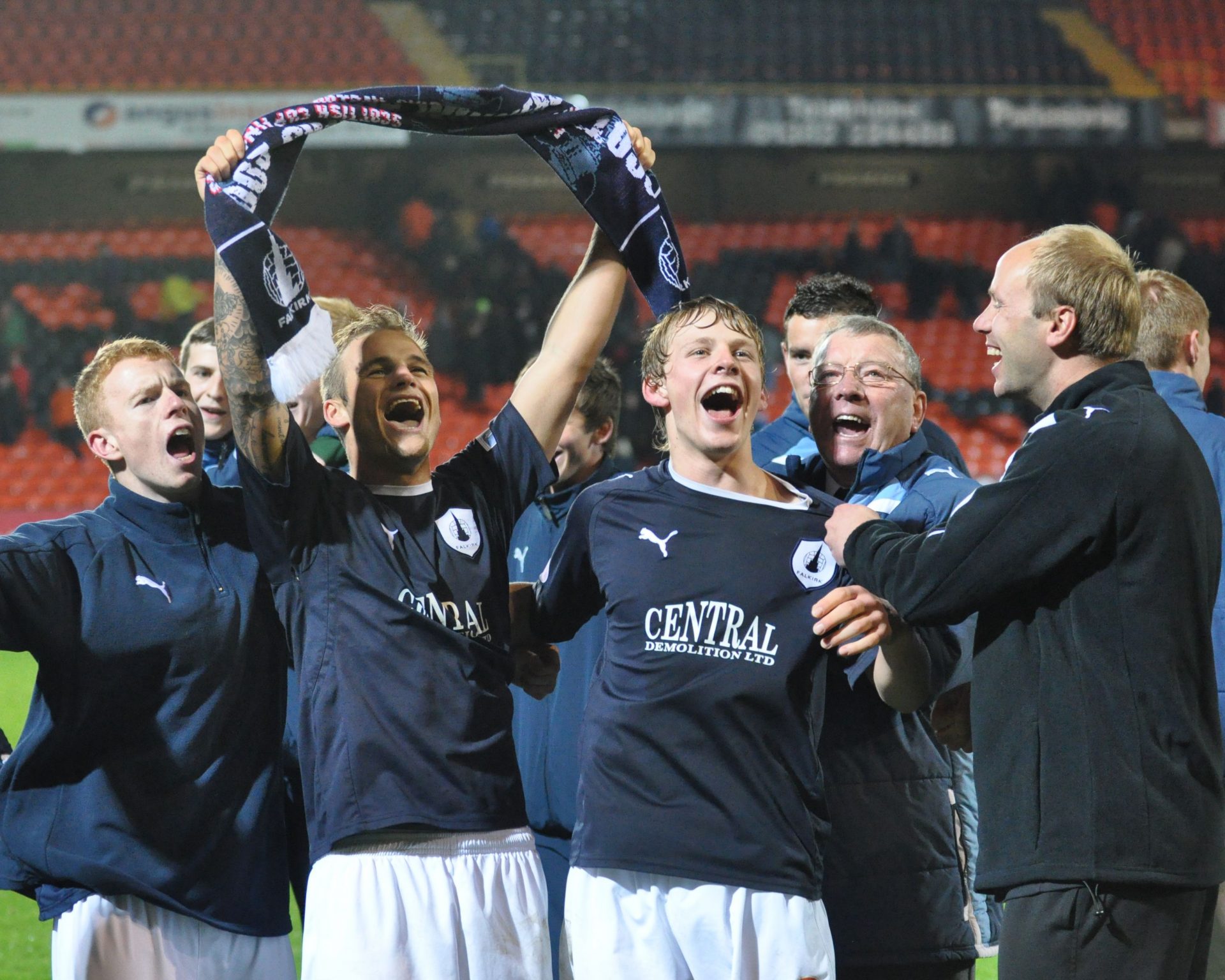 Formation: Stephen has chosen a 4-3-3 formation for his team and has opted not to pick himself.

“I had two managers during my time at Falkirk, Steven Pressley initially and then a year and a bit under Gary Holt. I got on well with both, so it’s very difficult to choose between them being honest, but if I absolutely had to pick one then I’d probably go for Elvis just because he gave me my debut which, as a player, you always remember”.

“The only other regular keeper we had during my time was Robert Olejnik and when he left Michael remained for the rest of my time with the club, so it was really just the two of them. In honesty though Michael was one of the best keepers up in Scotland that I played either with or against, except maybe Fraser Forster at Celtic. He was a brilliant keeper; Michael very much deserved his big move to Norwich”.

“I’m not going to put myself in at left-back, purely because the boys would be reading it and slating me for it! Left-back would have to be Tam Scobbie, he was one of the first young guys to break through from the Academy, which kind of led the way for the rest of us. Plus, he really established himself in the first team, so I guess he was someone I looked up to when I was coming through. He was such a stable player at left-back, you always knew what you were going to get from him”. 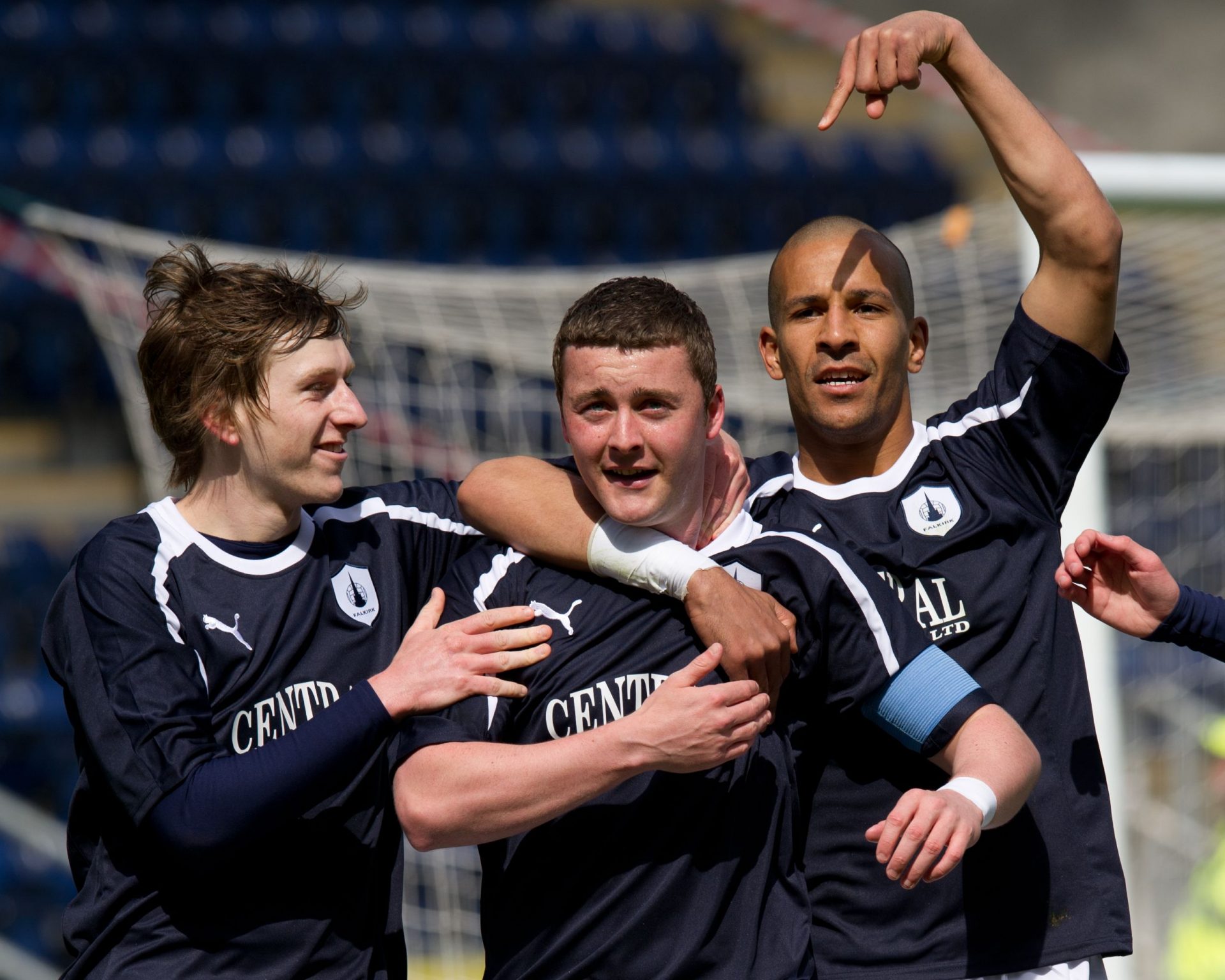 “Right-back has to be Kieran, it’s such a shame he was plagued by injury, but before that he was just brilliant. He was one of the most exciting prospects we had at the club and as I say his injuries were such a shame, but at one time he was a real prospect, and he was a great attacking full-back who could deliver very dangerous crosses too. The perfect supplier for the strikers”.

“I came up with Murray through the 19’s and then into the first team and to look at Murray you’d think he would be an old fashioned centre-half, but he wasn’t… he was brilliant on the ball. Technically he was very very brave and gifted too, so I’d definitely put him in there without question. No surprise when he moved to the English leagues”.

“Choosing Darren might be a surprise to some but at that time he was exactly what we needed, with that vast experience and especially for someone like me, who was playing every week, he was exactly what I needed. It made me feel at ease having someone of that experience beside me and he helped me play well throughout the season. He wasn’t the most technical player in some people’s eyes, but for us and in that team he played an absolutely vital role”.

“As the sitting midfielder it would be a choice between Burton O’Brien and Conor McGrandles. Burton was captain when I came through and was technically very good and he used to control games in that deep-lying midfield position and it was great to watch. He controlled the game and spread the passes. However, Conor McGrandles, I’d say he had what Burton had and more, as Conor also had the capability to break forward and produce something in the final third as well”. 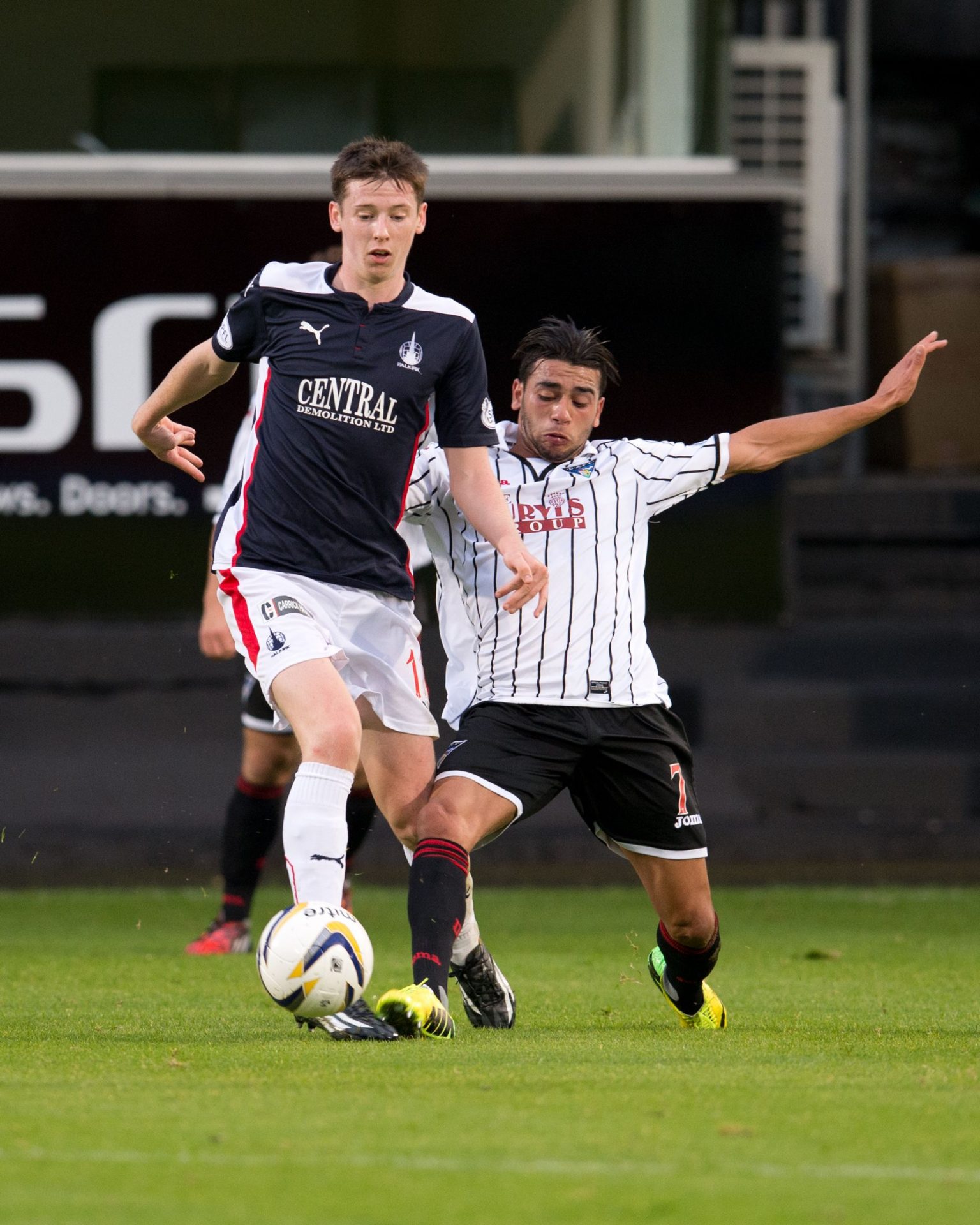 “I’d definitely have Mark in my team, because even though he was the moaniest guy I ever played with, he was also definitely up there as one of the most talented! Great with both feet and could spot a pass so he’s got to be in there to boss that midfield. Tough in the tackle but just a great box-to-box midfielder, could chip in with some goals from his well timed late runs into the box too”.

“My third midfielder is Jay, because out of everyone I came up through the ranks with, technically he was the most gifted. He was a great player for Falkirk and dangerous in the final third, a real creative threat. He’s worked really hard and came on again leaps and bounds since going down to Swansea and he’s got to be involved in my team as an attacking threat from midfield due to his ability to play a killer pass”.

“My first striker is Lyle Taylor and I say that because of his athleticism. He was strong, fast, powerful and could score. Simple as that. He could find the net and was probably one of the most effective players for us. He could even play the difficult lone striker role so well, because he could take the ball into feet, he could hold it up and link play, or he could go in behind, he was just a great all-round striker”.

“On the other side of attack again it’s a hard choice between Kallum Higginbotham and Craig Sibbald. I really wasn’t sure as it’s so difficult to choose this one, but I’ve put Kallum in here just because of the formation I’m playing. He was quick and creative and in his second season with us he caused panic in defences with his direct running. This was the toughest choice of my team and obviously if I was playing any other formation then ‘Sibbs’ would have been straight in as he’s a great player too”.

“My third striker would be a targetman to play in the centre as the focal point and it’s Farid. He’s a great guy and he’s in there purely for his overall goals and athleticism. He wasn’t the quickest compared to some strikers, but he had an incredible jump on him and for me, as a full-back or for any of the boys playing out wide, it meant if you could put a good ball into the box then he’d go and attack it and he’d get you goals. If you look at the front three with Lyle, Higgy and Farid they are definitely going to create and score you goals”. 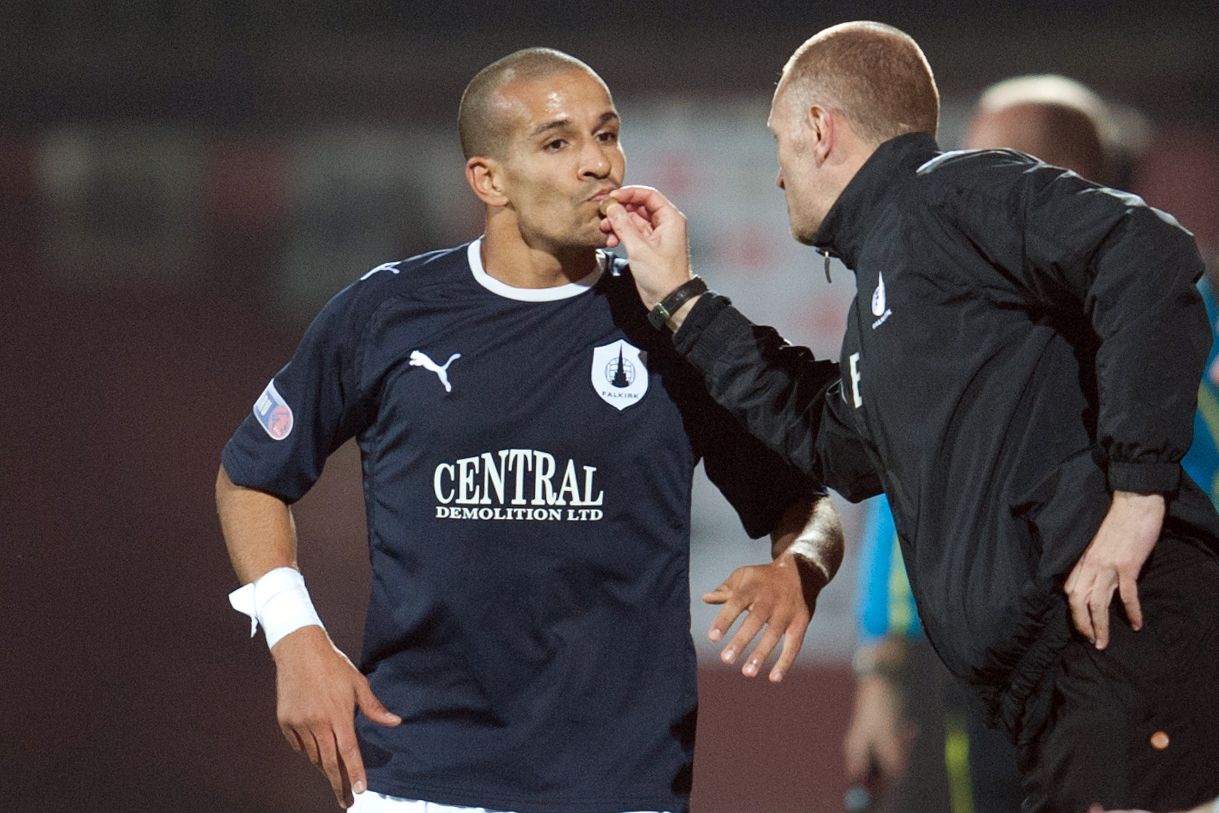 “There’s lots of good players I couldn’t fit in but a special mention to the following boys who would add serious competition from the bench; Craig Sibbald, Burton O’Brien, Robert Olejnik, Mark Stewart, Blair Alston, Luke Leahy and Will Vaulks. There’s some really good players in there and it covers all areas of the pitch”.

A strong team no doubt and one that would have been interesting to see in action. Thanks to Stephen for his time picking his “My Falkirk XI”.