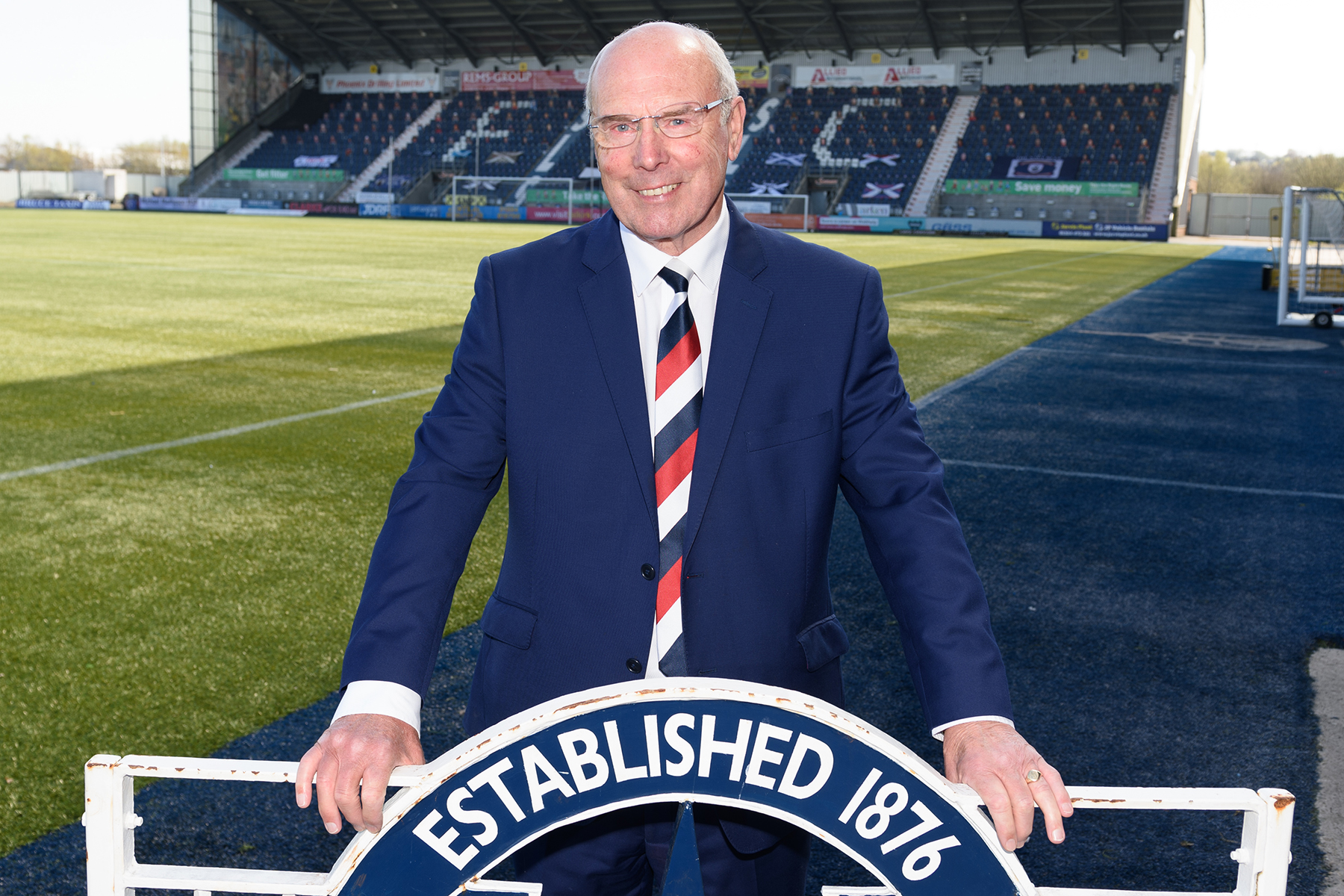 Falkirk Football club can confirm the retirement of Alex Totten at the end of this month.

Everyone associated with the club would like to thank Alex for his 28 years at the club as a player, manager and member of the Commercial Team. Alex will continue to represent the club in his role as Lifetime Ambassador.

Alex Totten is a well-respected figure in the Scottish game and there are few boardrooms in the country where he would not receive an extremely warm welcome. He is finally bowing out as an employee of Falkirk F.C., but it is a fair bet that he will still be seen around the stadium as a fan – a role he has taken since his Primary School days in Denny. Those supporters of a certain age will rattle off the heroes of 1957, and the eleven-year-old Alex was one of them who were at the game against Kilmarnock at Hampden Park back in 1957. Legend goes that he won the sweep on the supporters’ bus going to the game – and drew George Merchant as a scorer. Falkirk and Kilmarnock were to feature prominently in the Alex Totten Story, which certainly was a life in football.

He was a promising footballer at school in Denny and earned four Scotland caps at Under 15 level in 1961, in a squad that included Bobby Watson and Ian Mitchell. His performances saw him earn an apprenticeship at Liverpool and there he met up with one of his 1957 heroes – Bert Slater. Shankly was just starting to create a Liverpool dynasty and took the club from the old Second Division right through to European glory. Alex came back to Scotland to play for Dundee and Dunfermline before fulfilling his schoolboy dream of playing for The Bairns. From Falkirk, he moved to Palmerston and Queen of the South before finishing his playing career across the Forth at Alloa.

His experience as a player and as an observer of managers with hugely contrasting styles, made him a suitable candidate for the role as a football boss and he cut his teeth at Alloa before coming to Brockville as manager in November 1982. He replaced John Hagart and did much to restore confidence in the team. Many noticed his early success and Alex received a phone call from a most unexpected source. Jock Wallace of Rangers wanted him to become his assistant manager at Ibrox and he jumped at the chance. After the change of regime at Rangers, Alex moved to take over at Dumbarton and then had a most successful spell at St. Johnstone, where he took the club back from relative obscurity to the topflight. He was honoured by the Scottish Football Writers Association as their Manager of the Year in 1991.

His next port of call was at East Fife, and then came the chance to manager Kilmarnock. It came as a real surprise when he was replaced by Bobby Williamson in November 1996, but Falkirk were to be the beneficiaries. His second spell at Brockville was played out against a backdrop of severe financial restrictions and mounting concerns over the inadequacies of the ground. Promotion chances were blighted by the lack of stadium capacity and the constant need to attract quality players to club with an uncertain future. That Alex Totten constructed a side that reached the Scottish Cup Final in 1997, was an outstanding achievement. His success in winning the Challenge Cup and the top three finishes were remarkable. The final game just had to be against Kilmarnock and the omens all pointed to a fairy-tale ending. It was not to be but the semi-finals against Celtic will never be forgotten.

The repeated depletion of the side and the exodus of star players continued, and Alex must have been frustrated in trying to keep the playing side of the club motivated. Relegation seemed inevitable until the last – minute liquidation of Airdrieonians saved the club from the drop. The Board felt that changes were needed, and Alex moved into a Director of Football role after the arrival of Ian McCall. His role in more recent years was in income generation and he was responsible for significant fund-raising through sponsorships, major annual events, and partnerships.

He has given lengthy service to the club in a variety of roles, and he was awarded a Testimonial against Rangers in 2007. The programme cover carried the picture of Alex in his kilt for the 1997 Final at Ibrox and that image will probably be the one that will be forever associated with him.

Alex reflected on his time at his club and the decision to retire:

“It’s like when you’re a footballer and the time comes to hang up your boots, I just feel like this is the right time. I’ve thoroughly enjoyed my 28 years with Falkirk as a player, a manager and in Commercial. I’ve enjoyed the people I’ve been working with, they’ve been great, but I just feel the time is right now to spend more time on the golf course and with my family!”

“There’re great memories without a doubt, as a fan seeing us lift the cup, as a player winning the league with Alex Ferguson, Andy Roxburgh, George Gibson and John Markie. When I came as manager, we were bottom of the league, when I left, after one year exactly, we were second top which was great, and of course to come back as a manager and get to walk your team out at a Scottish Cup Final was a highlight, it was absolutely brilliant. Between Sportsman’s Dinners and Golf Days, Hospitality and Sponsors I think I’ve made about two million pounds for the club and I’m very proud of that.”

“The fans have been great; they’ve been very loyal and they’ve been tremendous to me. Next season I’m buying a season ticket, I’ve booked my seat! There’s lads called the Bishop’s Seat from Behind The Wall, so I’m going to go there with them and be in the stands to cheer the team on.”

“Alex has Falkirk blood coursing through his veins and has given tremendous service to the club as a fan, player, manager and club ambassador. On behalf of everyone connected with the club I would like to thank him for everything he has done for all of us over so many years and want to wish Alex and Jessie a happy and well-deserved retirement.”

“Alex was recently appointed Lifetime Ambassador for Falkirk FC and I know he will be around the Stadium going forward. Once we can all return to the Stadium, we will all have the chance to thank Alex and to wish him well.”

“On a personal level I would like to thank Alex for his fantastic support, commitment and friendship over my time working with him in the commercial department of the football club. It has been a pleasure to get to know him and become a friend over the years, and I wish him all the best as he goes into retirement.”