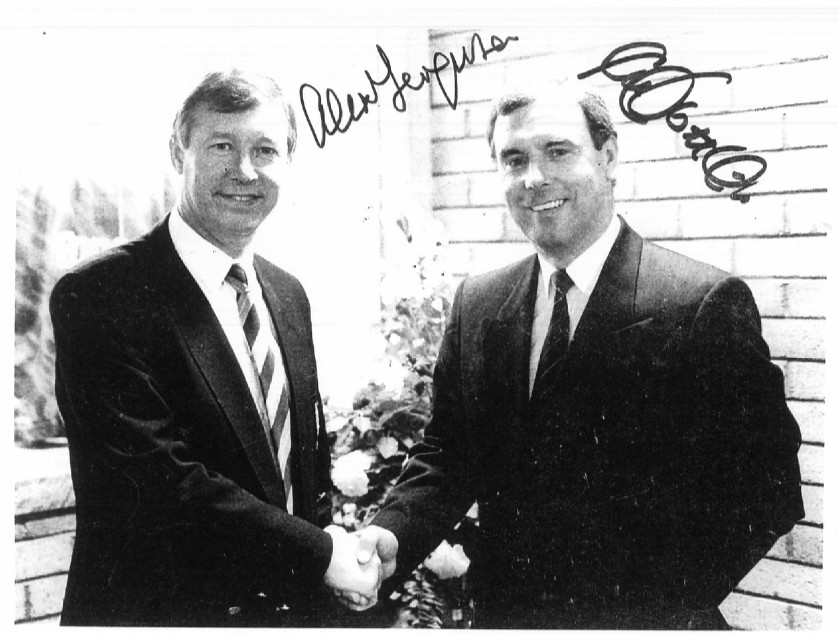 As the footballing world celebrates the 80th birthday of the legendary Sir Alex Ferguson, we flash back to August’s programme interview with the great man as the former Falkirk striker spoke about his time at The Bairns and a former teammate of his, Alex Totten!

“I really enjoyed my time at Falkirk. At the time I went there it was a very well-run club. The secretary was a man called Charlie Taylor, he ran everything day to day and was very experienced.”

“They had just been relegated when I joined. I’d just come off a bad end to my spell at Rangers and didn’t really know what to do. I had been about to sign for Nottingham Forrest when the manager Willie Cunningham, who was my manager at Dunfermline, phoned and persuaded me to go to Falkirk. I didn’t fancy the Second Division, but he told me ‘You won’t be there long’’. It suited my wife as she wasn’t keen on going to England at that time!”

The arrival of Sir Alex late in the day of the 1969/70 season changed The Bairns fortunes and Willie Cunningham’s Falkirk side went on to win that year’s first division to gain promotion back to the top tier of Scottish football.

“I think we were about fourth in the league when I joined, and we managed to go on and win the league. There was a great combination of players at the club, and we all got on really well together. The second team that year were Cowdenbeath, and they were some really quite intense games. Cowdenbeath had a great manager and came out of nowhere!”

“Winning a league is always important, it doesn’t matter what division it is. It was a measure of the ambition of the club, because they certainly had a lot of ambition at the time. They had a good ground with great crowds, and we held our own in the top division for the majority of the period I was there.”

During his time with Dunfermline was when Sir Alex first ran into a young Alex Totten, before meeting up again when both joined up at Brockville. He went on to discuss how Alex was as a teammate, both off the pitch and on it.

“At Dunfermline he was just a young lad after being freed by Liverpool. He came to Dunfermline when the starting left back was a fantastic player, John Lunn. John suffered from leukaemia and Alex then came in and stayed as the starting left back for quite a long time. When John came back after over a year Alex then stood to the side for him, which showed real class.”

“He wasn’t the quickest, but he was tough, he could tackle, and he couldn’t half use that left foot of his! He was always a really nice lad and a good communicator. He would recognise people all the time and was helpful to a lot of players out around the club.”

“He was a great crosser of the ball, he could really whip it in, and that was his strength. If he didn’t make goals for me with that left foot, then he’d make them for no one! I don’t know exactly how many goals he made for me, but in the three years at Falkirk I definitely did alright scoring wise.”

Sir Alex made the biggest impact of his career with management, becoming an icon of world football for his time in charge at Aberdeen and Manchester United. In his opinion the switch from pitch to the dugout also suited Alex Totten, with ‘Mr Falkirk’ having always showed plenty of attributes perfect for the head job.

“I think that becoming a manager is where Alex made the bigger impact. Management is a job in which you really need to have good communication. Your ability to confer with players and to understand their qualities is important, but also to be able to see that in everyone about you, from the ground staff, to your physio, to your secretary, and recognising the total unit is a very hard job but a very important one to do.”

“I’ve known plenty of managers who struggled with that, but Alex always had it even as a young laddie and he brought those qualities into management and had a very good first spell He then had a spell under Jock Wallace at Rangers. He was a terrific manager and would have learned a lot under him.”

When asked if he ever thought about replicating Alex’s iconic Scottish Cup Final look from 1997, when he walked out wearing a kilt, Fergie had only one answer!

“You must be dreaming!”

Sir Alex finished by wishing Alex his best for his retirement.

“I wish Alex every success in his retirement, and I’d like to wish him and his family the best of luck going forward.”

“He’s had a fantastic career and a fantastic life with Falkirk. I’ll always remember him as a young kid coming through at Dunfermline and progressing there to his career at Falkirk.  It really was a pleasure to play with him.”