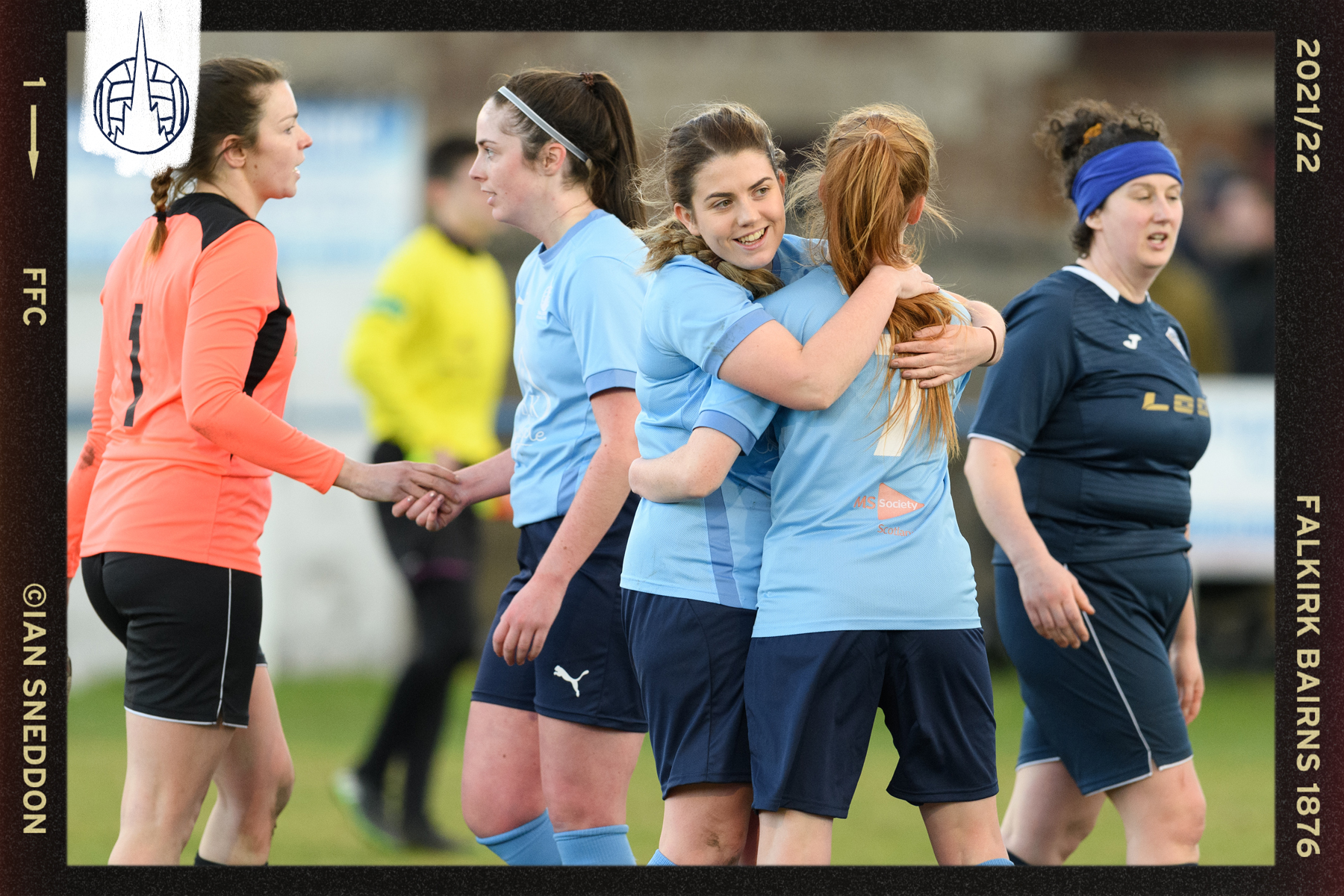 Having defeated league leaders Rossvale in the last round, Falkirk were rewarded with an away tie against Sutherland ladies. Sutherland play in the town of Golspie, an hour’s drive North of Inverness, so it was going to be a very long day for our girls.

There was a strong wind blowing when the game kicked off and Falkirk chose to play into it during the first half. Sutherland took full advantage with a great deal of early pressure which was rewarded in ten minutes. Their number 22 picked up the ball in midfield, drove forward and then lashed a shot from distance which the wind picked up carried into the net with goalkeeper Sarah-Louise Waugh helpless.

Falkirk were on the ropes in the early stages but clung on with some dogged defending and gradually gained a foothold in the game as the midfield started to get on the ball, but chances were still very much at a premium. Falkirk’s most dangerous forward was winger Zoe Taylor and she flashed a shot just wide midway through the half. Charlotte Holden had a shot from outside the box but it held up in the wind to give the Sutherland keeper an easy save. The wind played a part again when it picked up a Falkirk goal kick and saw the ball swirl into the path of a Sutherland forward, who almost had time to pick her spot before a timely intervention from centre half Jillian Leiper. Unfortunately, the resultant corner saw the ball headed into the net from close range to put Falkirk 2-0 down on 37 minutes. Things were looking grim at this point.

However, Falkirk have come from behind to win several cup ties this season and the fightback began in the last seconds of the first half. A freekick was flighted into the box and Falkirk captain Laura Dickson got her head on the ball to send a header looping over the goalkeeper and just under the bar with an inch to spare.

The second half was a completely different game. Falkirk had the wind behind them and a newfound determination that the hosts couldn’t match. Some of the passing and movement in midfield was a joy to watch, with this writer’s (wo)man of the match Sophie Rupp dictating the play and driving the team forward at every opportunity.

The equaliser was a goal that older Bairns fans who remember Lindsay Hamilton and Simon Stainrod would have recognised. Falkirk got a corner and midfielder Anna Goorevich curled a perfect ball over the arms of the goalkeeper and straight into the net on 56 mins.

After that it was one way traffic with shots from Sophie Rupp, Rhianne Ferguson, Anna Goorevich, Lauren Simmons and Zoe Taylor, the latter of which cannoned off the woodwork with the keeper beaten. Falkirk were determined to finish the game without extra time. For a while it seemed the goal wouldn’t come but with twelve minutes to go substitute Fiona Gardner hit a shot from outside the box. The keeper managed to block this initial effort but winger Zoe Taylor followed in and knocked the ball over the line for what would prove to be the winner.

Counting travel and food stops this was a fourteen-hour day for our team, but when you reach the next round of the cup all the effort feels worth it. Well done to our womens team.