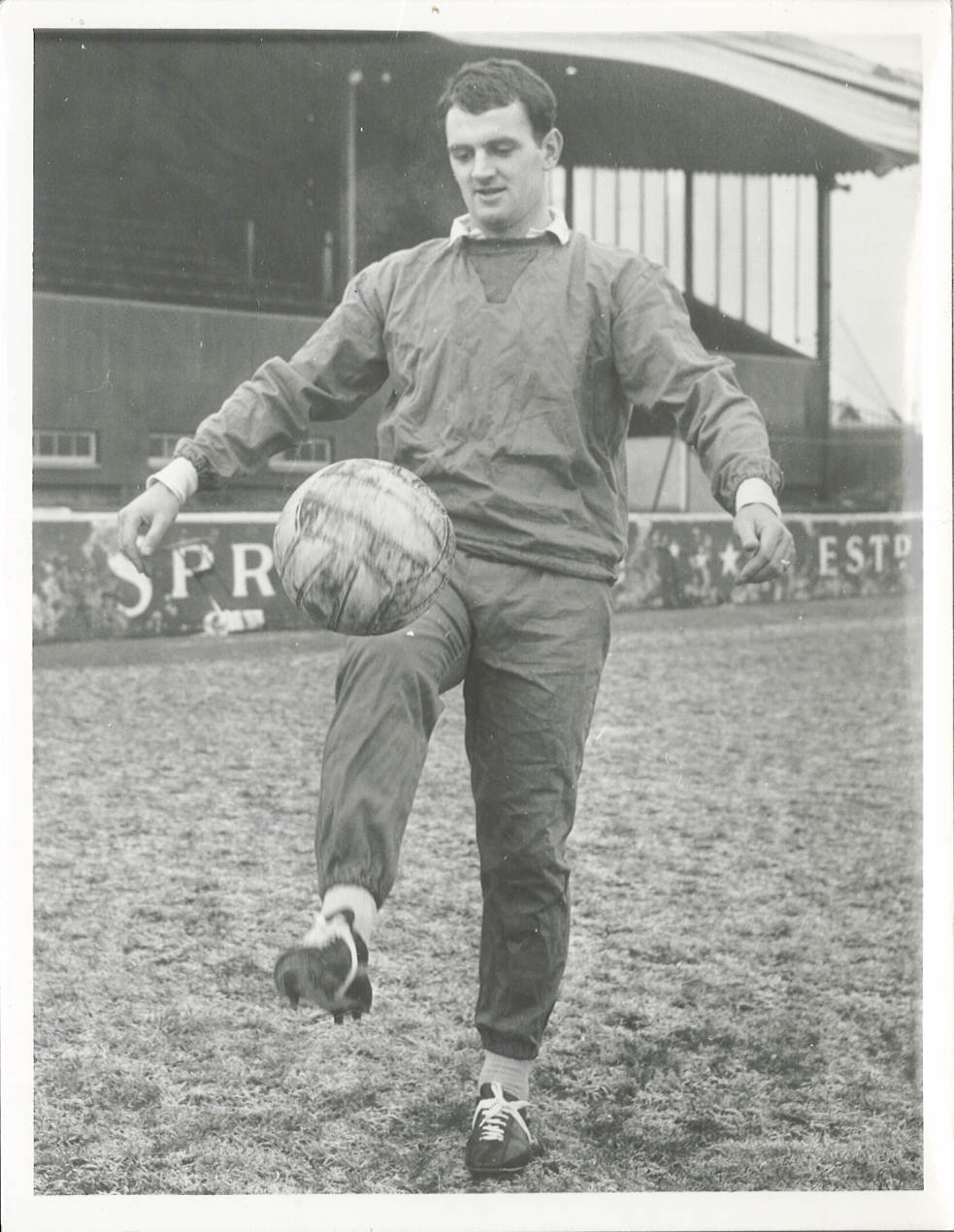 Falkirk fans who saw him play for the club in the Sixties, will have been saddened to hear of the passing of one of the real characters in the Scottish game. There are plenty of stories of Doug both as a player, and also as a respected sports journalist, to fill several books.

Born in Drycross on January 27th, 1937, he came to prominence in local football and even as a teenager, he was an outstanding powerfully built defender. He signed for Airdrie from Douglas Water Thistle and gave good service to the Lanarkshire club in two spells, only interrupted by a brief period with Swindon Town. It was while he was an Airdrie player that he earned his two Under-23 caps, and on both occasions, there was a Falkirk connection. The first Under-23 encounter saw England win 6-0 at Shawfield and Alex Parker was at right back. In his second appearance Bert Slater was in goals when Wales won 1-0 at Tynecastle.

Doug could play at centre-half or centre-forward and was equally at home in both positions. This trend was quite common in those days and there was no better example than John Charles of Wales. George Merchant was another who was capable of playing in both roles. Doug was transferred to Rangers in season 1960/61 for a then record fee of £15,000 and became a useful addition to a very strong Rangers squad. His chances were restricted by the consistency of Bill Paterson and the emergence of a young Ronnie McKinnon although he never let the side down. Highlights of his Ibrox career included  a League Cup winners medal  from 1961 when Rangers beat Hearts at Hampden in a replay after a 1-1 draw. Realising that his chances would be few and far between, he moved to Third Lanark, but the troubles that were to eventually engulf the Glasgow side were starting to have an impact. He left to sign for Falkirk where he became an important figure at the club.

He made his Falkirk debut on March 6th, 1965, against Aberdeen and showed his versatility scoring twice in his next outing in the centre-forward position. He was an imposing figure in the side, and he was an obvious choice as captain. He gave many gritty displays in the middle of the defence and his aerial ability never diminished. He was a popular player with colleagues and an obvious leader. The arrival of a new manager, Willie Cunningham, almost marked the end of Doug’s Brockville career and he played his last game in a 5-1 hammering at Rugby Park in November 1968. Doug told the story behind his eventual departure from Falkirk, and it was a typical Doug Baillie “special.” It illustrates two things. Firstly it shows the way some managers treated players back in the day, and secondly it emphasises the extent of Willie Cunningham’s determination to see Doug leave Falkirk. Doug bore no animosity towards his former manager as he told the story to an incredulous audience of ex-players.

Doug’s final club was Dunfermline, and he ended his playing career at East End Park. He took up a career as a football reporter with the Sunday Post, and quickly established himself as a credible and entertaining writer, combining a perceptive analysis, interspersed with a scattering of couthy Scots phrases ideally suited to his readership. Doug’s reports were always amusing and always displayed an honesty lacking in many of his colleagues work. He was highly regarded by other football writers and became President of the Scottish Football Writers Association.

Doug was a big presence in every way, and it was real pleasure to meet him and spend time in his company. He was a larger- than- life character and aspiring football reporters could do worse than read some of his reports- and learn. No cliches, no posing, no flowery language – just lots of perception, humour, honesty and common sense. He wrote as a player and a punter and someone who genuinely loved the game.