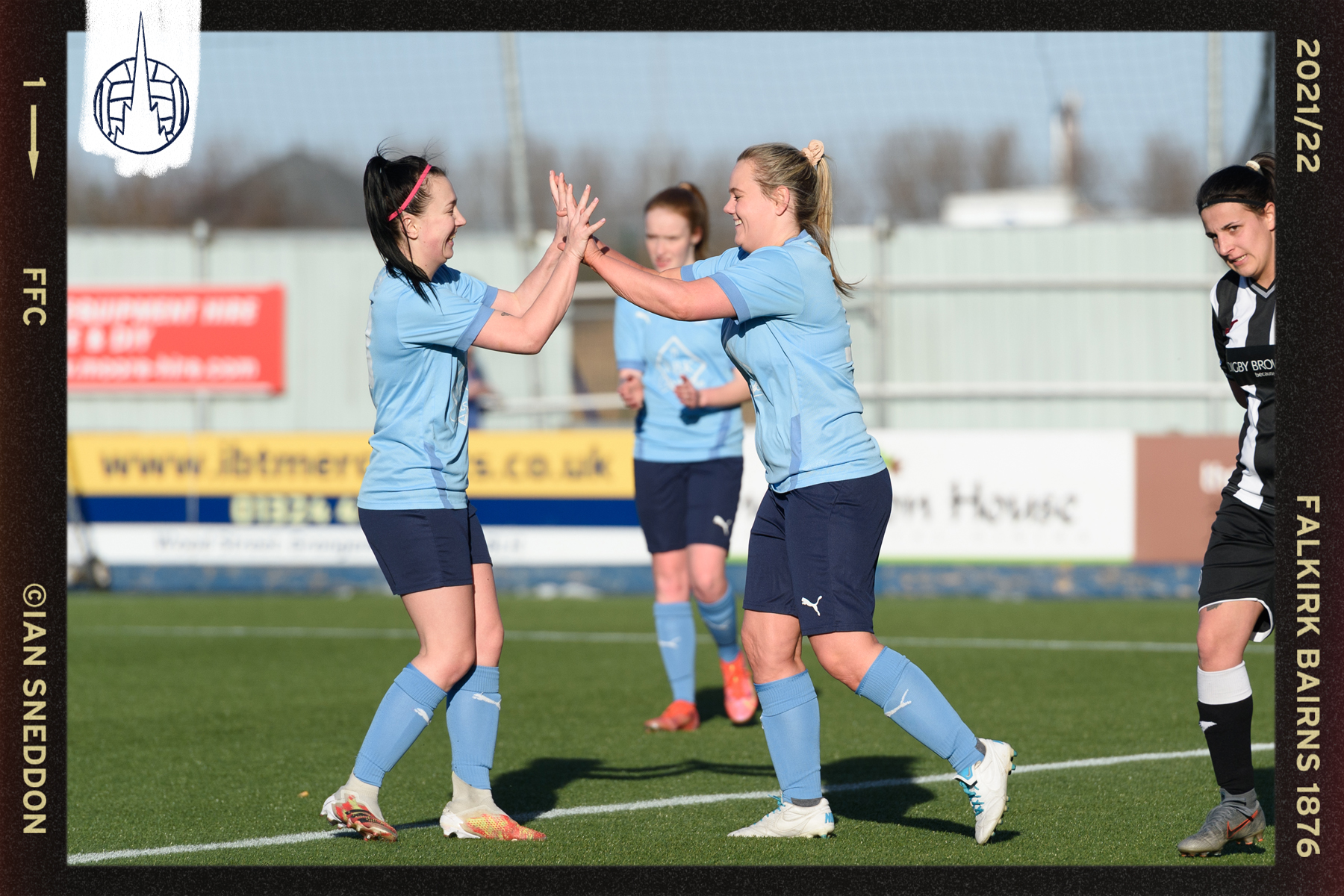 With the league split now in force Falkirk played St Mirren for the second time in just over a week.  The opposition were fielding a much-weakened team and this would be reflected in the game, with Falkirk having almost total dominance from start to finish.

Within the opening twenty minutes Falkirk would have four great chances, with shooting opportunities either inside or just on the edge of the box. Despite having only the keeper to beat every time, all four shots went wide of the target.

Midfielder Rhianne Ferguson showed her forwards how to aim in the 22nd minute, with a great shot from distance which rattled the crossbar with the keeper beaten. The rebound fell perfectly to a blue shirt in the penalty area – and the ball was again blasted over the bar. The groans of frustration from the coaching staff could be clearly heard up the other end of the park.

Falkirk finally opened the scoring in the 25th minute. Our wingers were running riot and Ellie Roberts crossed from the right wing to left winger Zoe Taylor, who took advantage of a fumble from the keeper to knock the ball into the empty net. The game was made safe in the 40th minute with a two-pass move. Centre half Aimee Lenathan played the ball into midfield, Anna Goorevich slipped a great ball into the feet of Taylor and the winger evaded one challenge before shooting low past the goalkeeper.

The coaching team made three changes at halftime in an attempt to get more bodies into scoring positions and improve the finishing of the forward line.

St Mirren also appeared to change formation as they became more compact and restricted the space which our girls had been enjoying in the first half.  They were still multiple opportunities, with shots from Emma Meaney, Anna Goorevich, Zoe Taylor, Holly McEwan and Ann Taylor. In this half though, all the shots were being blocked by St Mirren tackles rather than Falkirk skying them over the bar.

Only one more goal would be added. Zoe Taylor had a chance for her hattrick in the 75th minute when she received the ball in the box following a Falkirk freekick. Her attempt was blocked, but the ball broke to midfielder Lauren Simmons who slotted home from close range.

It could and should have been four. With nine minutes to go Falkirk won a penalty. Ann Taylor had been having an excellent game in midfield and would later be named in the female team of the week. She would have been confident when taking the penalty but placed it too close to the keeper allowing a save to be made.

After this result Falkirk move to the top of the post-split league, albeit by only one point above near neighbours Stenhousemuir. Sterner tests lie ahead, and a bit of shooting practice may be in order if our girls hope to remain in pole position at the end of the season.