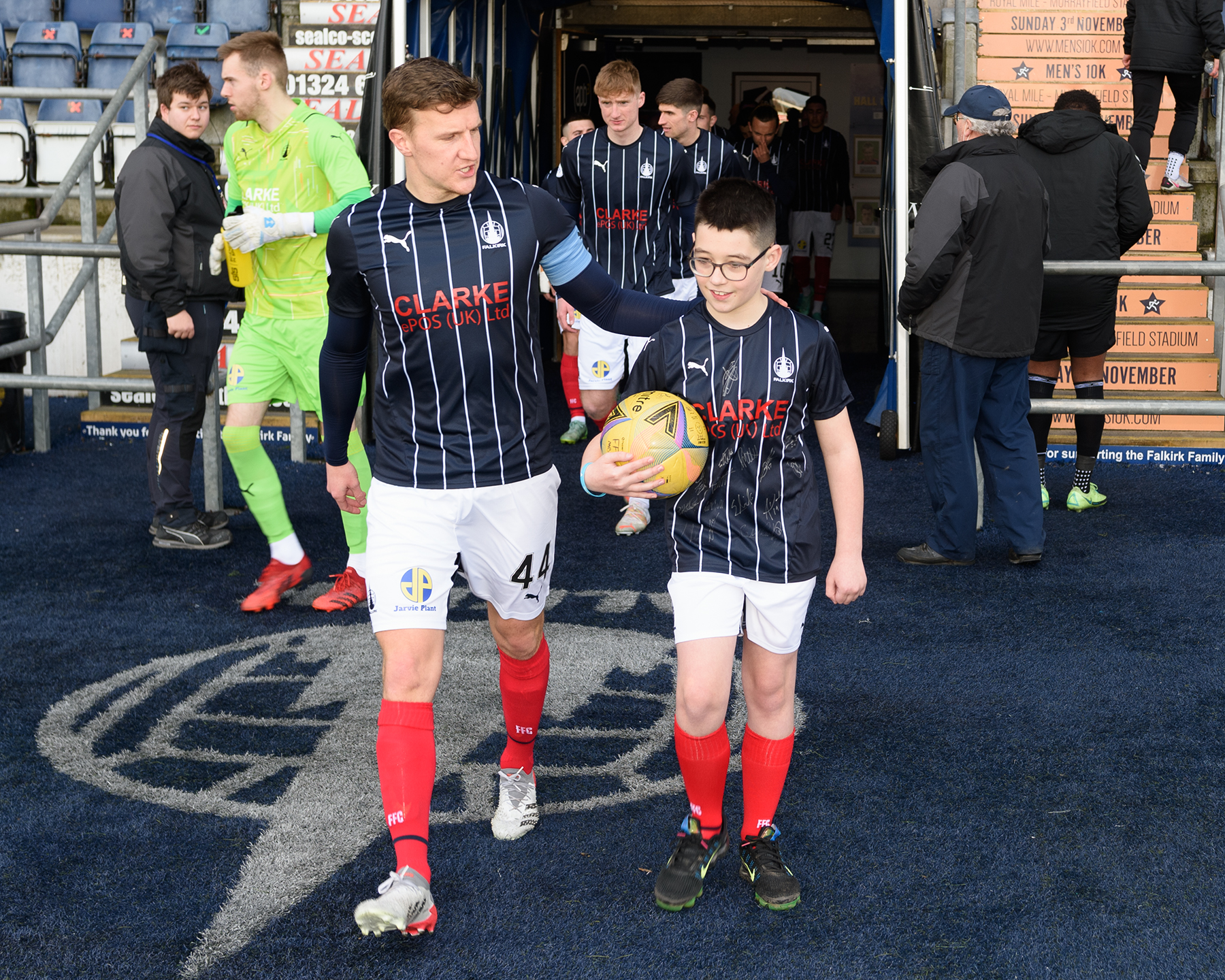 We were delighted to welcome Aiden Berry along to The Falkirk Stadium on Saturday – our first matchday mascot since before the Covid 19 pandemic!
Aiden is 10 years old, he is a kind, polite and friendly child who is interested in gaming, reading, playing football and going out to play with his friends.
Aiden was 8 years old when he was first diagnosed with Hodgkin’s Lymphoma. His dad, Graham, told his story:
“It all began with a lump appearing on his neck in April 2019. When the lump did not go away after a week Aiden’s mum took him to the GP, who agreed it appeared more than a normal lymph node response as Aiden had not been unwell with anything leading up to the lump appearing.”
“Aiden had numerous scans, X-rays and bloods to rule out different causes over the course of several weeks before being referred to the Royal Hospital for Sick Children in Edinburgh, this is when it became clear that Aiden was seriously unwell. They decided to biopsy the lump on Aiden’s neck, and it was confirmed the next week that Aiden had nodular lymphocyte predominant Hodgkin’s lymphoma, and they were going to start his chemotherapy treatment as soon as possible.”
“This is one of the most gut-wrenching things to be told as a parent. We were all devastated that this was happening but confident that it was treatable, so we put our trust in his wonderful oncology and haematology team.”
“Aiden undertook 3 months’ worth of chemotherapy to shrink the tumour. This was deemed successful but there were still some cells remaining, so he went on to watch and wait which means he had monthly scans to check for any more growth. Every month brought anxiety and fear of what the scans would show and by May 2020 they could see that his tumour was steadily growing again, so it was decided he would need to undertake a stronger regime of chemotherapy called R-CHOP. Aiden was extremely upset with this news as he knew what was going to be happening over the next few months, as he had been through it just the year before.”
“Aiden is now over a year out of treatment. All scans have come back clear since September 2020 and each scan is getting further apart. Despite this Aiden is still living with some of effects from his treatment, he tires quickly, and he has lost muscle strength in his legs. Aiden will require to have heart scans every five years for the rest of his life and will need to lead an active, healthy lifestyle. Although Aiden says he is fine we as parents worry about the long-term effects this may have on him both physically and mentally.”
“Having a child with cancer and watching them undergo chemotherapy treatment at such a young age changes you as a person. It brings with it emotions of fear, anger, guilt and sadness. All you wish for your child is to be happy and healthy and when that is taken from them suddenly it can be hard to live a “normal” life after this. Every cold, ache, pain, lump brings the fear his cancer has returned which I suppose is our new normal.”
You can watch the video of Aiden’s visit to The Falkirk Stadium on the club’s Social Media!
Go to Top