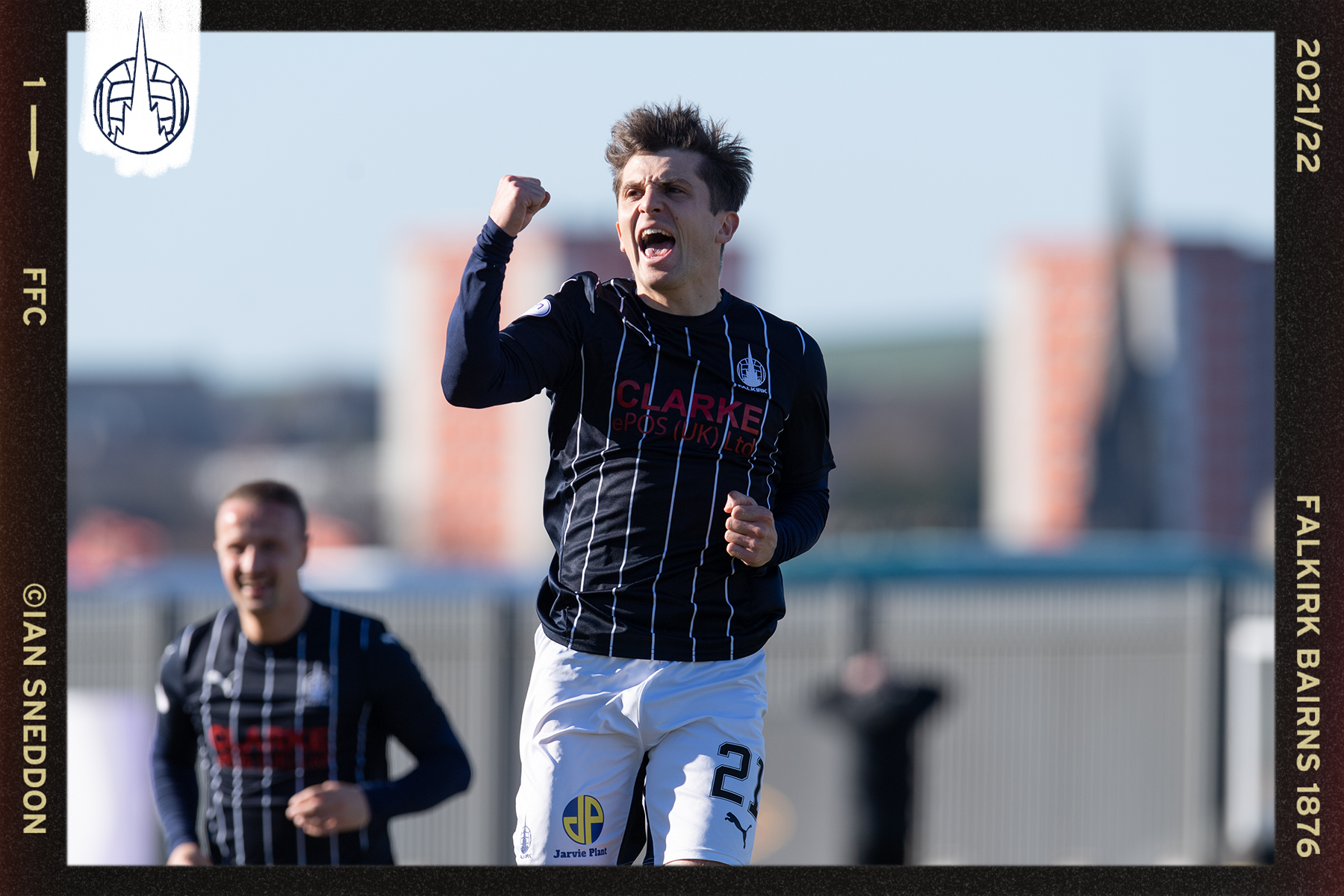 The Bairns ran out comfortable winners at The Dumbarton Football Stadium, despite tricky conditions, to climb three points closer to the play-off positions.

Falkirk, at times this season, have struggled to take an early lead in games but that wasn’t the case today as Martin Rennie’s men found themselves a goal up within the opening five minutes.

Although it looked to be a beautiful day with the sun shining, play was made difficult due to strong winds. This made things awkward as any hopes playing along the ground were hampered by a poor playing surface. With this in mind, full-back Ryan Williamson picked up the ball deep in his own half and played a long hopeful ball in an attempt to find a running Jaze Kabia. The ball fell just short and the chance looked to have disappeared until Stephen Bronsky played a poor header back to his keeper. Kabia acted quickly, stealing the ball, taking it around the goalkeeper and rolling the ball into an empty net.

Falkirk then went looking for another, keeping the pressure on Dumbarton and creating another chance just six minutes later. Charlie Telfer, who looked to be playing in a more advanced position than usual, found Jaze Kabia with a lovely pass down the left wing. Kabia beat his man with some quick feet before checking past another and trying a shot from outside the box which was well blocked.

Shortly after, it was the home team’s turn to apply some pressure, giving the Falkirk defence a couple of panicky moments as they attempted to clear the danger. The ball ended up going behind for a corner after some scrambles in the box. The resulting corner would have ended in a goal for Dumbarton had it not been for a well placed Gary Miller who was on hand to clear a headed attempt off the line.

Dumbarton’s period of pressure didn’t last long however, with Falkirk doubling their lead in the 27th minute. Some lovely play on the left hand side saw Telfer and Kabia link up brilliantly, play that saw Kabia set up Telfer with a back-heel. Telfer then fired a low strike from 15 yards, beating the goalkeeper at his near post.

Telfer could have made it three just five minutes later when Kabia played him through on goal. Despite being well onside, the linesman raised his flag, much to the dismay of Telfer and the travelling supporters.

Charlie Telfer was running the Dumbarton defence ragged and almost scored again a few minutes later after being set up by some nice work from Craig McGuffie. Charlie managed to get a decent shot away but it was blocked by the Dumbarton man and sent narrowly over the bar.

The final chance of the half came just moments before the whistle. Leigh Griffiths sent a cross deep into the box that was headed back into the fray by Gary Miller. Jaze Kabia managed to get on the end of it but his volley missed the target by inches.

Dumbarton manager Stephen Farrell would have expected a response from his team in the second half but it didn’t come and The Bairns saw another chance go begging just three minutes after the restart. It was Ryan Williamson with a long searching ball again that found Jaze Kabia who found himself bearing down on goal. His touch made the angle too tight however, and the ‘keeper parried the effort at goal. Williamson was involved at the other end as well, getting back in time to put in an excellent challenge, denying Ross MacLean from getting a goal back for the hosts.

Falkirk finally had the ball in the net for a third, or so they thought, as Charlie Telfer whipped in a perfect free-kick, finding the head of Aaron Taylor-Sinclair who nodded home. Offside was the call again however, with the match finishing two nil to The Bairns who left the Rock with all three points and a clean sheet.