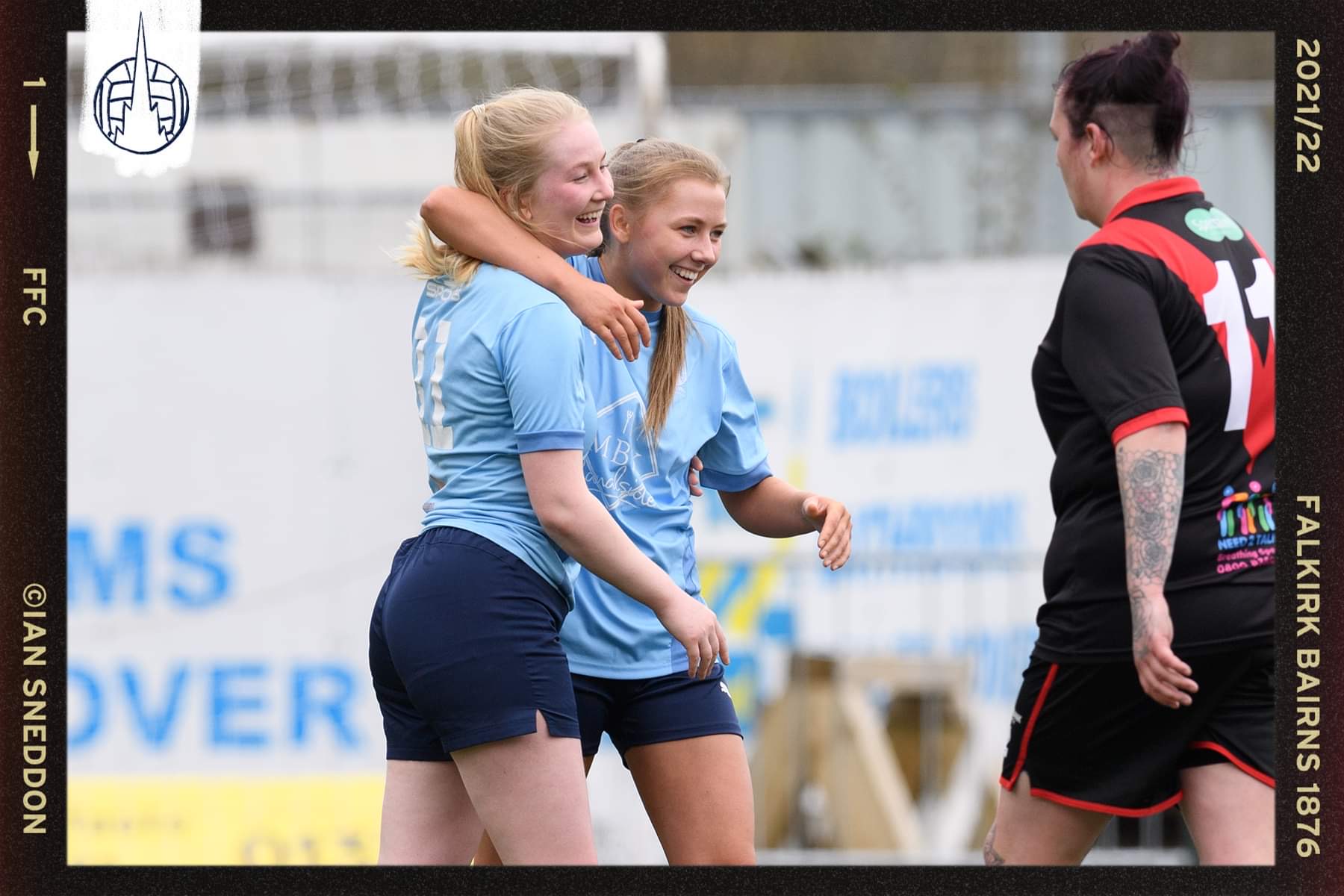 Falkirk drew their final game of the season to ensure they went through their last six games unbeaten, winning four of them.

The girls had an early scare when the Airdrie number 20 was tripped from behind as she was running in on goal. It looked a possible goal scoring opportunity denying red card challenge, but fortunately the referee awarded only a yellow to the Falkirk captain. The subsequent free-kick went over the bar.

The game seemed to be following a pattern of Airdrie dominance in possession while Falkirk created all the chances. Ellie Roberts and Anna Goorevich both had shots from tight angles which went wide and Charlotte Holden had a shot from just inside the box that was saved. Twice the Airdrie keeper had to rush off her line to deny the Falkirk strike-force after excellent through balls from Taylor and Avril Johnstone, while in the Falkirk goal Rachel Pirie had only one header to deal with.

The visitors shocked the home team by taking the lead on 35 minutes. Number 12 drove past Falkirk captain Laura Dickson and then evaded a challenge from the other centre-half Aimee Lenathan before placing a shot past Pirie and into the net.

Falkirk could have been two down in 39 mins but Pirie produced a great save to palm away a shot which was going into the bottom corner. That would have been extremely harsh on the home side, who fully deserved their equaliser on the stroke of half time. Goorevich played a precision pass to Roberts just inside the Airdrie box. Two defenders went in for the tackle but she got the break of the ball and shot into the net before they could react again. Falkirk had equalised with the last kick of the half.

It could have been two in the opening minutes of the second half. Taylor played Roberts in again but this time the keeper was equal to her shot. Three minutes later a header from Taylor was blocked and Goorevich put the resulting shot over the bar. Holden then shot wide, the keeper again rushed out to deny Roberts and Dickson headed over from a corner.

Falkirk were pushing for a winner but Airdrie were still fighting in what was a closely-matched game. Their number three seemed to be running clear of our defence but before she could get her shot away Dickson was there again to clear the danger.

Falkirk would have two final chances. Substitute Claire Taylor evaded three challenges before shooting but the keeper saved it. Then fullback Lisa McIntyre played in Zoe Taylor in front of goal. It looked certain she would score, but somehow the ball bobbled away from her outstretched foot and the chance was lost. That would be the last opportunity of the game.

Considering this season was the first ever for the reformed Falkirk Women, our girls can be proud of their achievements. They competed well with teams who’d been playing together for years and finished top of the bottom half of the table, while in the cup they had unexpected wins over teams ranked much higher than them in the league structure. Everyone at FFC thanks them for their efforts in representing our club and we look forward to welcoming them to our Recognition Night in a few weeks time.